The Crowning Ceremonial of Emperor Charles V was created in 1530 and documents the ceremonial coronation of Charles V as Holy Roman Emperor. The historical manuscript was in the possession of Pope Clement VII and is decorated with valuable miniatures and Initials. Today the inestimably valuable original is located in the Vatican Library.

In 1530, an inestimably valuable historical document came into being, which documented the celebration of the coronation of Charles V as ruler of the Holy Roman Empire. The Crowning Ceremonial, which was commissioned by Charles V and presented to Pope Clement VII, marked a milestone in the history of Europe. The magnificent manuscript is bedecked with imaginative initials and valuable miniatures implemented in all kinds of ways. It contains texts that were recited during the ceremony. The Crowning Ceremonial is a work that satisfies the significance of its historical occasion.

The Emperor of the Holy Roman Empire

Charles V was a universal monarch, who was predominant over all other kings. He was the elected Holy Roman Emperor and was considered to be the guarantor of peace in Europe and the protector of the occident from the Ottomans. He saw himself as responsible for the protection and reform of the church. In the year 1530, he was the last German-Italian ruler to be officially crowned emperor by Pope Clement VII in Bologna. He was consequently ruler by the grace of God and ruled over a territory of unimaginable size, which encompassed territories from France across Spain to Portugal.

The coronation of Charles V occurred as he stood at the highpoint of his political career. In the run-up to the celebrations he travelled to Italy. There he was received by Pope Clement VII, who would also crown him. Both of the political leaders prepared for the ceremony, which occurred on February 24, 1530, the 30th birthday of Charles V. Pope Clement VII was the last pope to crown an emperor. The ceremony, which only the most important lay and ecclesiastical princes of the time could participate in, was recorded in the valuable Crowning Ceremonial. Fantastic, sometimes full page miniatures and Latin text documented everything that was said and done during the ceremony. Large initials and colored bordures, which were bedecked with gold ornamentation, lend the pages a royal luster. The work, with its important political background and rich book decoration, constitutes an exceptional masterpiece of the Renaissance. 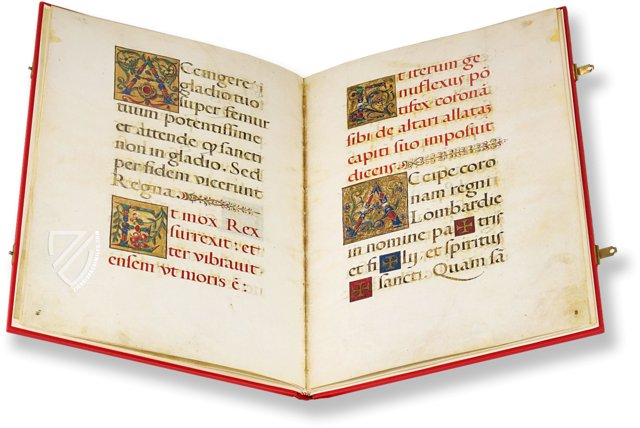 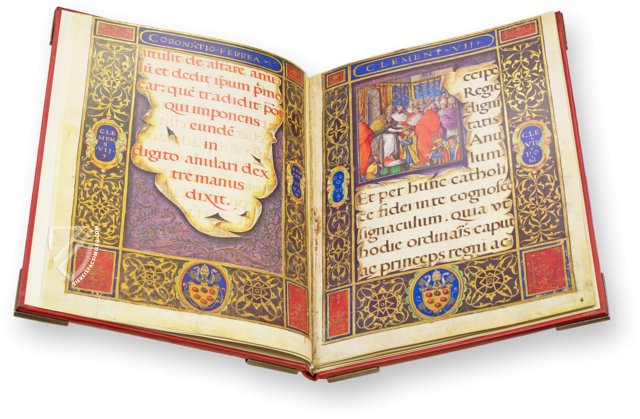 This gift from the Emperor is full of papal imagery. E.g. a ruby-encrusted golden shield is presented at the bottom of this page crowned with a papal tiara and adorned with the crossed keys of the heirs of Saint Peter. Classically styled marginalia with pendants, torches, branches, and numerous other elements flank this papal emblem. The Latin text is written neatly in precious red ink and includes the year of this masterful and exemplary manuscript’s creation: 1530. 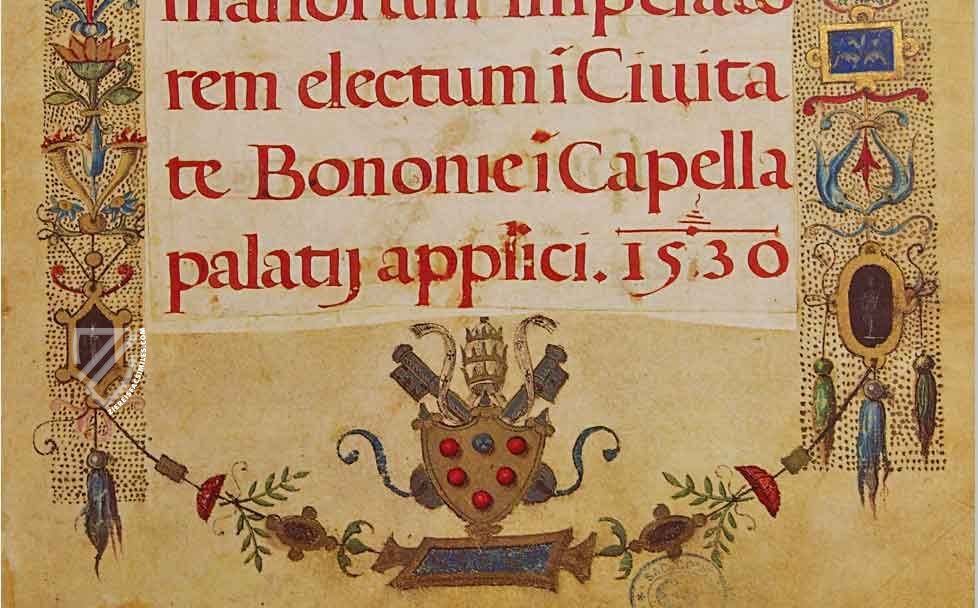 King Charles I of Spain was crowned Holy Roman Emperor Charles V by Pope Clement VII in Bologna on February 22nd, 1530 making him the last emperor to receive a papal coronation. This historic event is depicted on this magnificent miniature page. Every square inch of this parchment sheet is artfully adorned and the golden tendril frame has the name and escutcheon of Pope Clement VII.

The sumptuous miniature depicts both pope and emperor in lavish garments: Clement wears his papal tiara and a somber expression while the kneeling Charles wears a cloth of gold robe. In a room lined with tapestries, they are surrounded by richly dressed nobles and cleric. One last interesting detail is the text, which is rendered as though it is written on a tattered piece of parchment. 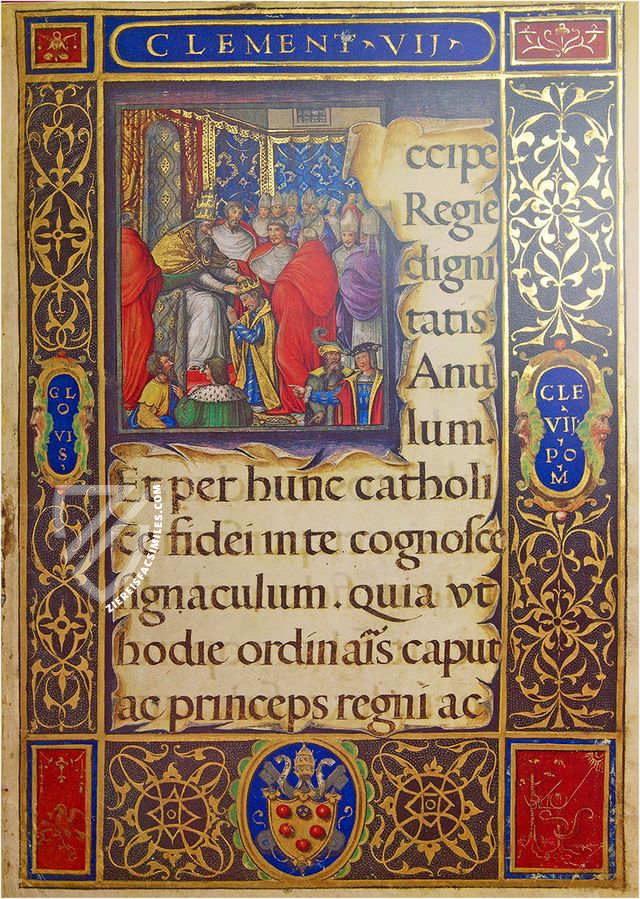 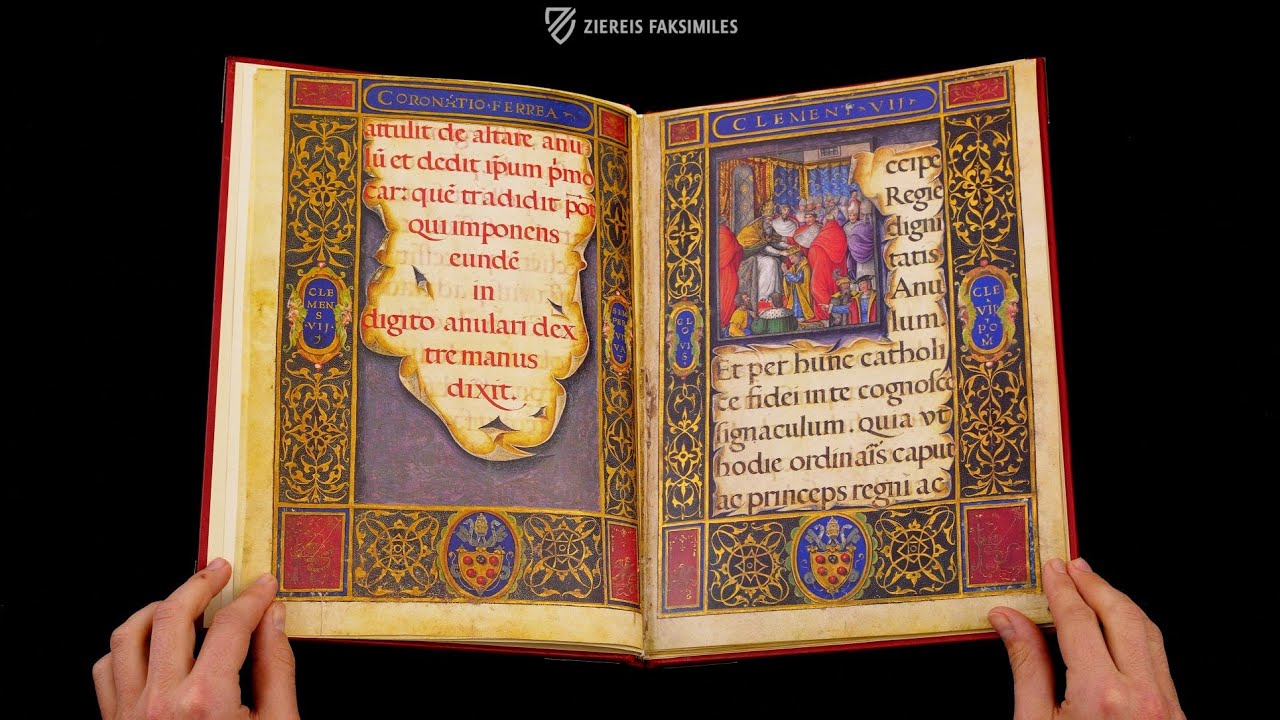 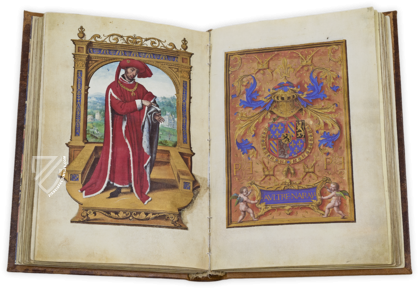