The Spiez Illuminated Chronicle represents the end of the glorious series of city chronicles by Diebold Schilling. It is the chronicler’s most artistically significant work and gives proof of the Bernese master’s talent one last time with its exceptionally rousing illustrations. Rudolf von Erlach, a Bernese knight and friend of Schilling’s, commissioned the work in the early 1480’s. Schilling was responsible for both the elegant script and the 344 masterful miniatures that differ greatly in style to those in earlier chronicles and consist of pen and ink drawings glazed in different colors. Many seamlessly intertwine plotlines in the fore- and backgrounds while the human figures, usually, depicted with large eyes and serene expressions, are unusually realistic for the period.

The so-called Spiez Illuminated Chronicle is the last work by the popular author and chronicler from Bern, Diebold Schilling. On 808 pages written in Schilling’s finest script, it depicts the history of the city of Bern from its beginnings to the year 1465. The work focuses on the family history and triumph of the Junker and councilman Rudolf von Erlach, who commissioned the work. The text is accompanied by 344 highly valuable illustrations.

Diebold Schilling produced the Spiez Chronicle for a private commissioner, namely the public official Rudolf von Erlach (1299–1360). They were close confidants to one another, Schilling’ wife was even godmother to a son of Rudolf’s. Rudolf von Erlach could look back on a glorious past, his family were among the most important people in the political system of Bern and he himself had fought in the conflict with the Burgundians for his homeland and thereby attained fame and honor as well as a high position in the council of Bern. He was at the highpoint of his extremely successful career at the time that he commissioned the Spiez Chronicle.

In his work, Rudolf’s friend and chronicler bound the renowned history of the family with a self-confident image of the city of Bern, and therewith created his last and most artistically valuable masterpiece. He worked on it until his death in the year 1486. The elegant script stands in the tradition of Schilling’s famous previous works, e.g. the Zurich Chronicle.

Quality of the Highest Order

What makes the work especially admirable are the 344 miniatures contained therein, which are of a heretofore unknown quality. The pen and ink drawings, containing varying graduations of color, possess an uncannily expressive power and dramatic depth. The illustrator has succeeded in intertwining various plotlines in the picture and effectively synchronizing the fore- and backgrounds. In numerous illustrations, dramatic events of war are seen in the foreground, while ideal landscapes are revealed in the background through a window. In the text, scenes of war are predominantly depicted as well. The depictions of human figures are unusually realistic for the time of its creation and begets the extraordinary talent of the illuminator. 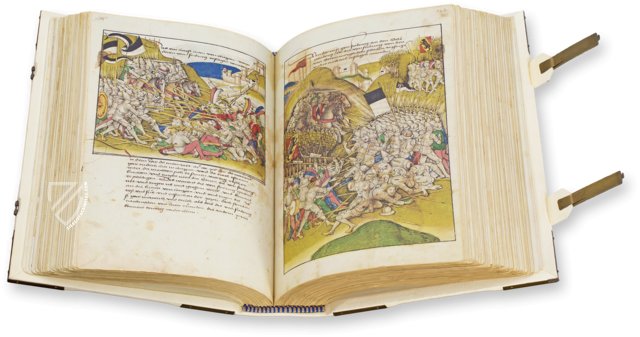 Appenzell is a historic Swiss canton which is entirely surrounded by the larger canton of St. Gallen. With the help of Bern and other members of the Old Swiss Confederacy, they established their independence on May 15, 1403 at the Battle of Vögelinsegg by blocking a mountain pass and forcing the battle on their own terms. Identifiable by their bear flag, a phalanx of Bernese troops armed with pikes and halberds repel a charge by the knights serving the Prince-Bishop of St. Gallen. 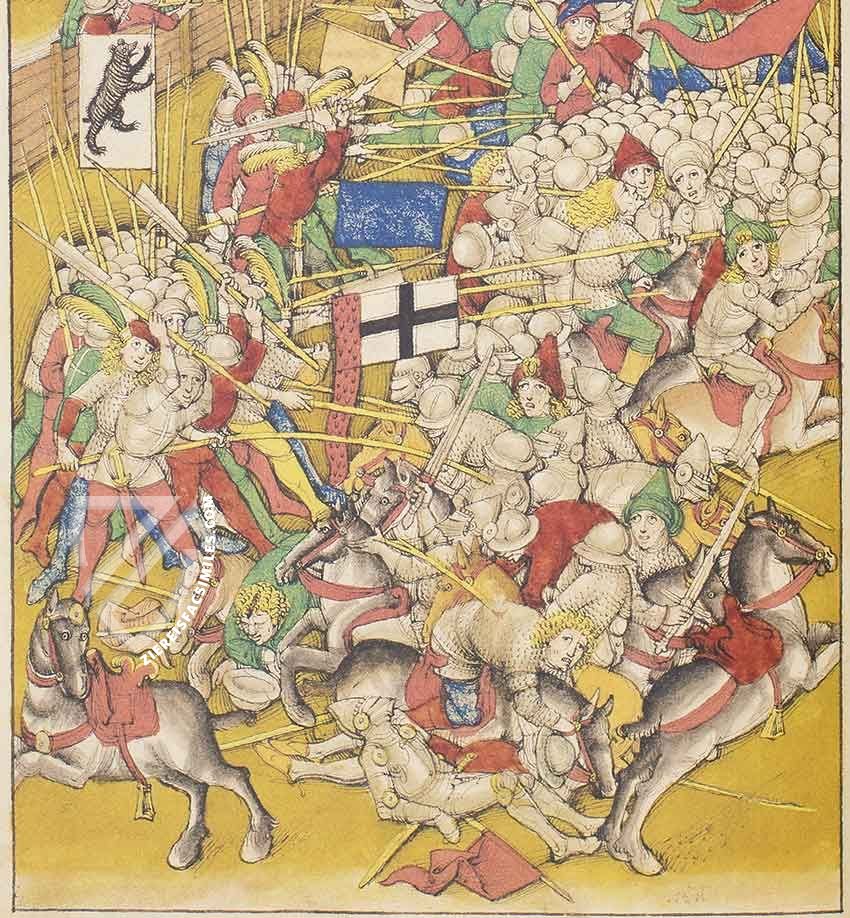 Third Stroke across the Grimsel into Valais, 1419

One of the events depicted in this history is the Raron Affair, a rebellion in the Canton of Valais from 1415 to 1420, which nearly caused a civil war within the Swiss Confederation. In 1419, Bernese troops once again crossed the Grimsel Pass to invade Valais in support of their allies, the Raron family, with an army of 13,000 that burned villages as it moved through the canton to punish the rebels.

Identified here by Bern’s coat of arms – the bear – the main column of soldiers emerges from the pass as a moving forest of pikes while other units set fire to buildings. These pen and ink drawings are considered to be the finest of any of Schilling’s chronicles and the human figures in particular are exceptionally realistic for the period. 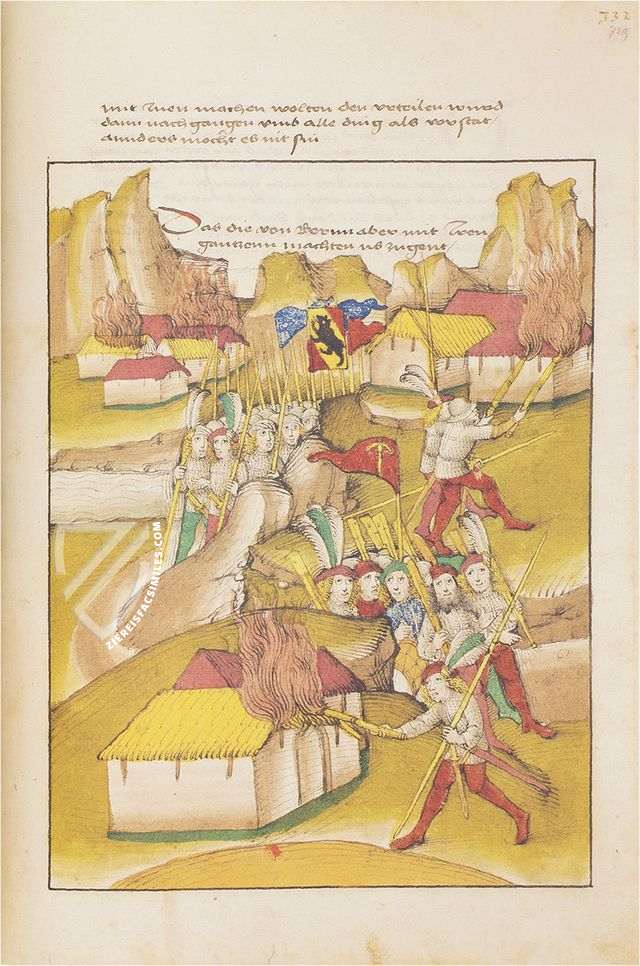 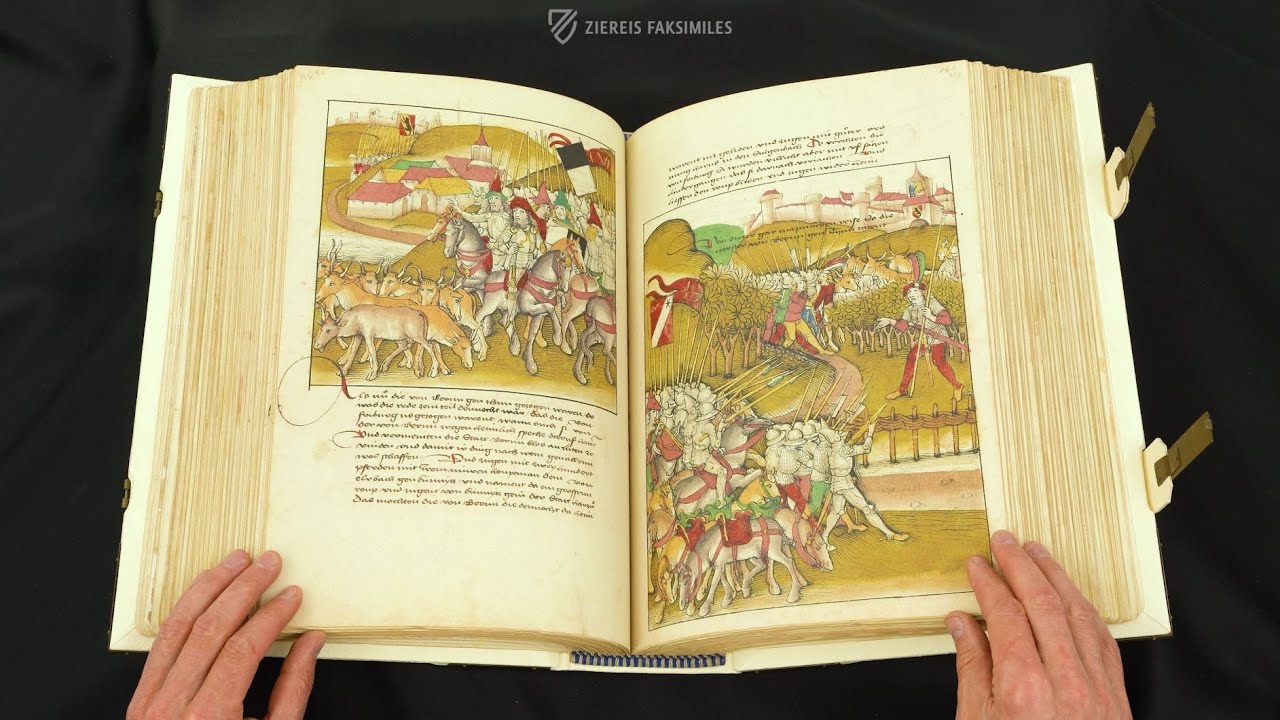 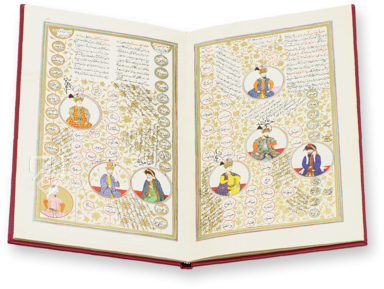