Tschachtlan's Illustrated Chronicle is the first illustrated city chronicle in the German language and was created ca. 1470 by the Swiss chronicler Benedict Tschachtlan. Tschachtlan himself designed the 230 mostly full-page, gaily-colored illustrations, which show scenes from the lives of great statesmen, as well as reflecting the everyday life of the common people. With his work, Tschachtlan paved the way for numerous famous successors and contributed to the historical tradition.

The Swiss Confederation, as it existed in the 15th and 16th centuries, yielded numerous famous names of German book art. Some of the most famous and influential world chronicles originate from this time. The first of these chronicles is Tschachtlan's Illustrated Chronicle. The work created by Benedict Tschachtlan (ca. 1430–93) is a reliable and diverse source for those interested in cultural history. Everyday life in the country and the city as well as events of war in and around the home city of the author, Bern, were chronicled.

Benedict Tschachtlan, a loyal statesman in service to Bern, reports on the events in his beloved city in his chronicle. His claims are based on previous works by Konrad Justinger and Hans Fründ, which until then did not receive much attention. Together with Heinrich Dittinger, his friend and fellow politician in Bern, Tschachtlan created a history of his city, in which he masked everything negative and confined himself solely to the everyday scenes of city life, such as scenes of justice, as well as renowned military actions. Tschachtlan and Dittinger describe themselves as the authors in the epilogue of the work and write that the chronicle ends in 1470.

The Prototype for all Illustrated Chronicles

The chronicle of Tschachtlan is the first work of its kind, never before was a world chronicle illustrated with pictures. As a young man, Diebold Schilling, the most famous Swiss chronicler, made use of Tschachtlan’s book as the foundation for his own first work. One can actually see from it that he was involved in the creation of the codex. Tschachtlan and Dittling did not created their chronicle for a specific commissioner, it was their private work.

The Source of Book Decoration

Tschachtlan himself was responsible for designing the 230 predominantly full-page colored illustrations of the book. The pictures testify to a fresh, unconcerned, and appealing styling. They exhibit an astounding diversity of scenes from life in medieval Bern, for example, weapons and common clothes can be seen, battles and sieges are visible, and the camp life of the soldiers of Bern were illustrated as well. The life of the great statesmen and common peasantry is recorded in the finest detail, the pictures show cities, castles, and above all else the successful campaigns and conquests in those days were painted by the artists in the most magnificent range of colors and detail. Thus the work continues to succeed as a contemporary witness in fascinating the reader to this day.

Scaling ladders are assembled and a gate is being hacked apart with an axe as the soldiers of the Prince-Bishop of Basel storm a walled town, which appears undefended and caught by surprise. They are identifiable thanks to the unique standard with the so-called Baslerstab or “Basel Staff” – a red crozier or bishop’s staff with three points on a field of white. The soldiers are fully armored from head to toe, some with open-faced helmets while the faces of others are obscured by their visors. 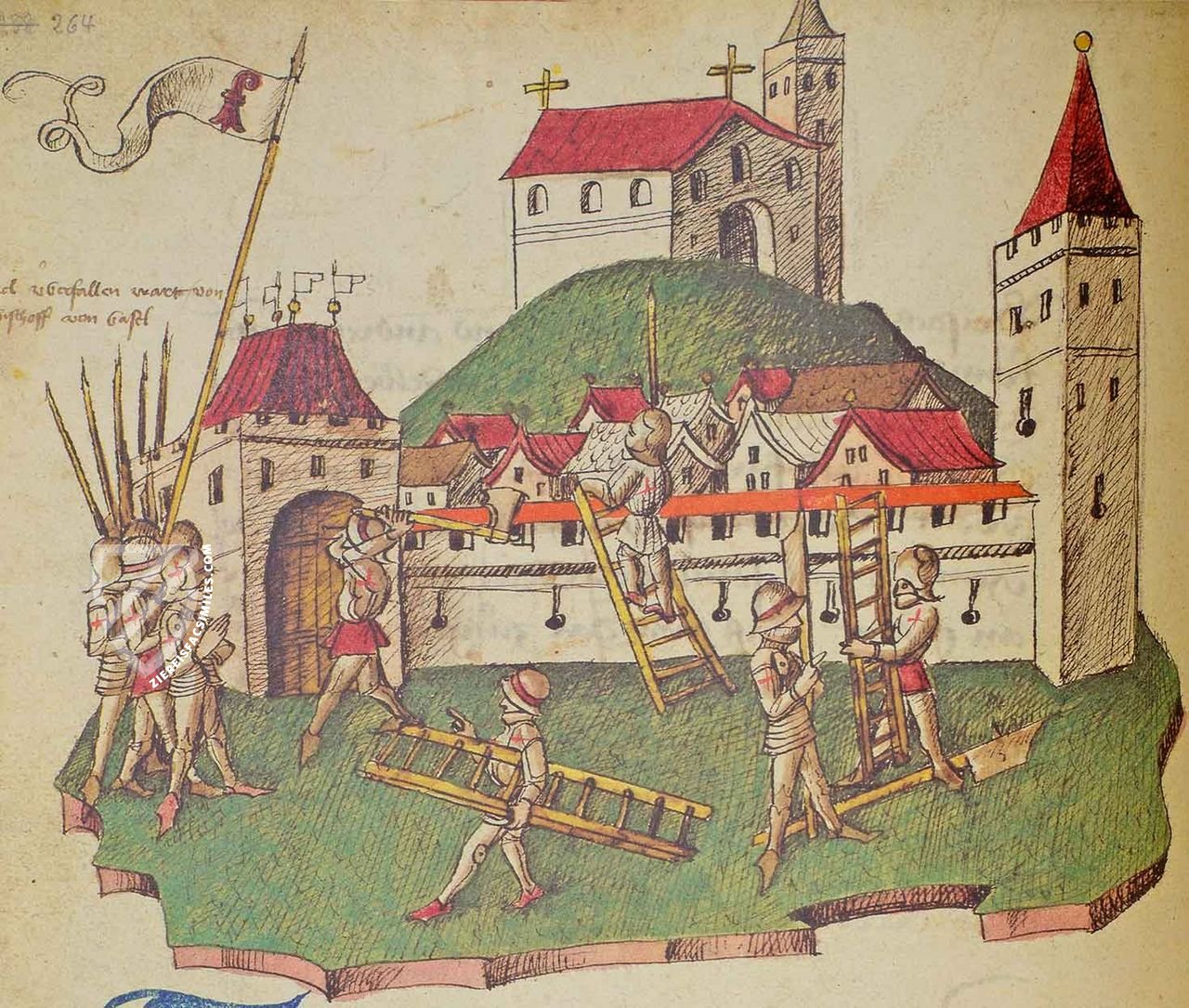 Conquest of the City of Aarau

On April 18th, 1415, the Hapsburg city of Arrau in Northern Switzerland was attacked by a vast army of Bernese troops equipped with a large caliber cannon, the so-called Nürnberger Büchse. By April 20th, the vastly outmatched defenders had been forced to surrender after a hole was punched in their city wall by the frightening new weapon.

The attackers, identifiable by the bear escutcheon of Bern, and their allies from Solothurn are simultaneously bombarding the city and assaulting the wall by boat. Below the flag of the Hapsburg eagle, one sees a hole punched in the wall and opposite it, Bernese troops armed with pikes are forming up for an attack. The details of late medieval warfare pictured include halberds, Gothic armor, and a catapult. 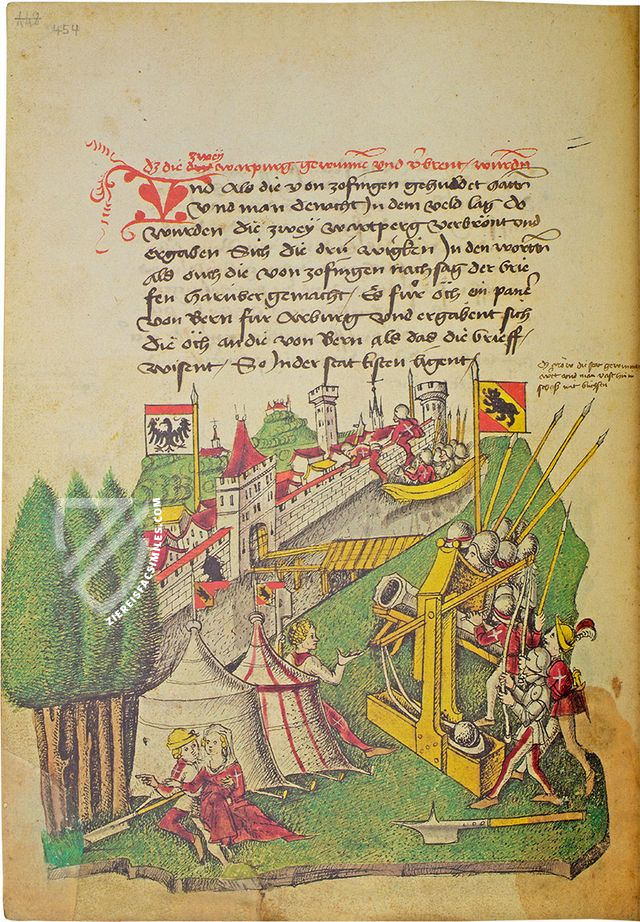 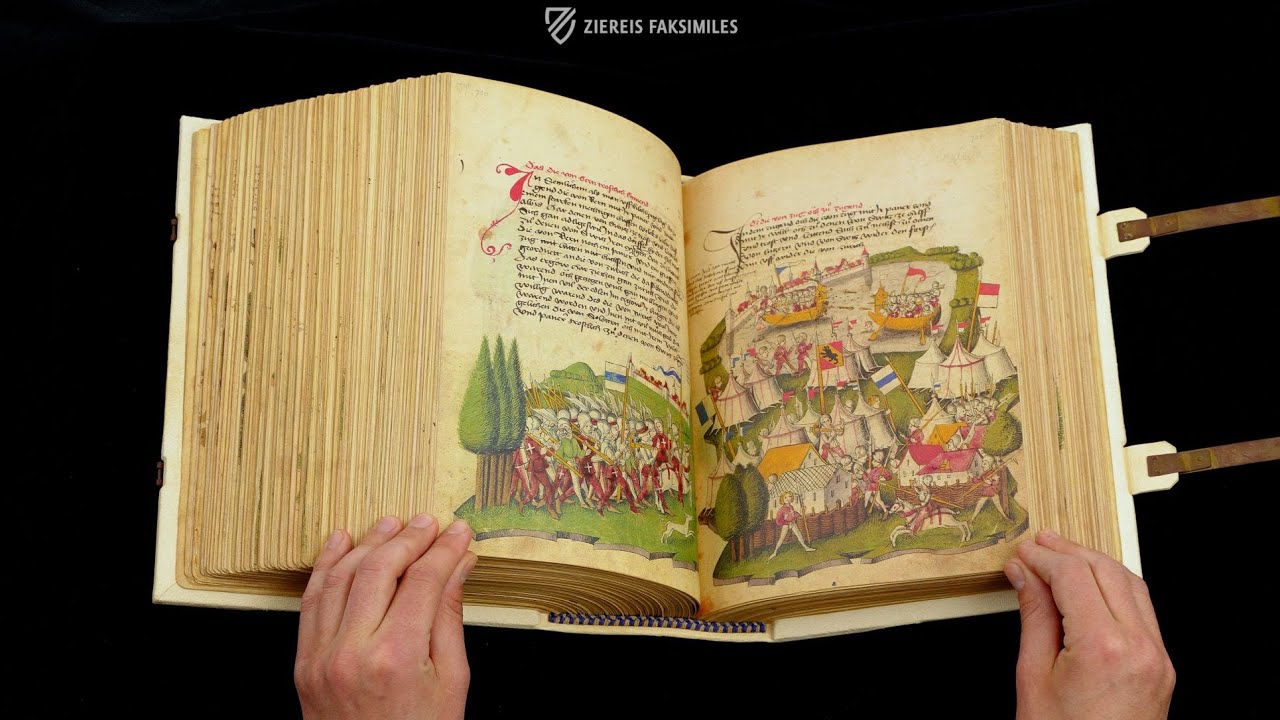 Publisher: Faksimile Verlag – Lucerne, 1987
Limited Edition: 980 copies
Binding: The full-leather binding has been reproduced by hand, embossing and clasps correspond with those of the original book. The leaves have been sown by hand on five cords.
Commentary: 1 volume (480 pages) by Alfred A. Schmid, Pascal Ladner, Sigmund Widmer, Urs Martin Zahnd and Hans A. Michel
Language: German
1 volume: Exact reproduction of the original document (extent, color and size) Reproduction of the entire original document as detailed as possible (scope, format, colors). The binding may not correspond to the original or current document binding.
Price Category: €€ (1,000€ - 3,000€)
Edition available
Price: Log in here!
Order / Ask a Question
You might also be interested in: 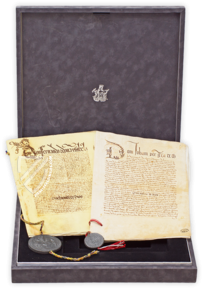 It still separates Portuguese-speaking Brazil from Spanish-speaking South America: the treaty between the world powers of Spain and Portugal to divide the world into two hemispheres, negotiated by the Borgia Pope 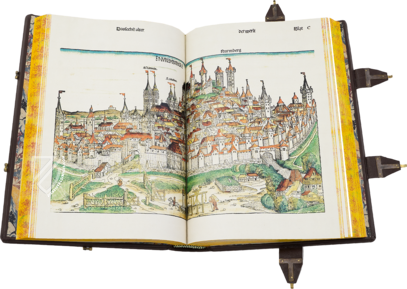