The Flemish Book of Hours of Marie de Medici is probably the most magnificent book of hours from the Netherlands towards the end of the Middle Ages. It was created around 1515–20 by the “Master of the David Scenes in the Grimani Breviary” in either Ghent of Bruges. The work was famous for its unusual wealth of imagery. It is not only the excellently designed perspectives in the miniatures, but also the numerous additional decorative elements such as fantastically designed initials and borders that account for the allure of the book of hours.

Books of hours were probably the most popular type of book towards the end of the Middle Ages. The private devotional books were named after the prayers that were supposed to be performed at specific times of day. Every book of hours was a collection of various prayers and gospel readings, which included, among others, the Office of the Virgin, the Passion of the Christ, and the Office of the Dead. An example of particular artistic value originates from the Netherlands between 1515 and 1520, namely the Book of Hours of Marie de Medici. The codex contains three full page, painterly illustrations, 42 full page miniatures, as well as gilded initials and embellished borders on each page.

The Talented Master of the David

The illuminator, who is responsible for the ornate book of hours, is only known today by his name of convenience Master of the David Scenes in the Grimani Breviary. He was one of the greatest masters of Flemish book art, one mentions him in one breath with famous book painters Gerard Horenbout and Simon Bening. The Book of Hours of Marie de Medici is counted among the most magnificent and beautiful works of its kind. The fame of the painter and the rich colors and gilded book decoration are indicative of a wealthy commissioner. Their name, however, is not known.

The Flemish Book of Hours is today known by the name of its latter owner, namely Queen Marie de Medici. The widow of the French King Henry IV, who unsuccessfully plotted against Cardinal Richelieu, was forced into exile in Brussels in 1631. Here she acquired the spectacular codex. She lived out the last years of her life in Cologne in the house of the painter Peter Paul Ruben. On the inside of the front cover it is noted that Marie left the work in Cologne, where it was probably acquired by the English book collector Francis Douce. The manuscript went to the famous Bodlein Library in Oxford with his inheritance in 1834.

The miniatures of the Flemish Book of Hours are a truly breathtaking example of Dutch book painting. All the compositions are designed in a luminous selection of colors with brushed gold. The painter staged lively stories and designed people and buildings realistically and with attention to detail. He caringly depicted the architectural achievements of the late Gothic period in particular. He conceptualized views of the squares and streets, church buildings, studios and private rooms, which take the beholder back in his time. The Flemish masters from Bruges and Ghent did not unjustly consider themselves to be the wunderkinds of book painting and after the invention of book printing their manuscripts were desired around the world.

A particular characteristic of the Book of Hours of Marie de Medici is the perspectival images spaces of the miniatures and the richly decorated borders. The gifted Master of the David commanded the spatially-perspective depictions so perfectly that he succeeds in leading the eyes of the beholder directly inward toward the spaces or landscapes. Thus, the miniatures became works of art that are in no way inferior to the paintings of the great Dutch artists. The artist succeeded in particular by highlighting the borders which surrounded the miniatures. He told further stories with the plants and insects of the elaborate borders, which referred to the theme of the primary miniature. Through his refined construction, he created a unified space from both pictures. 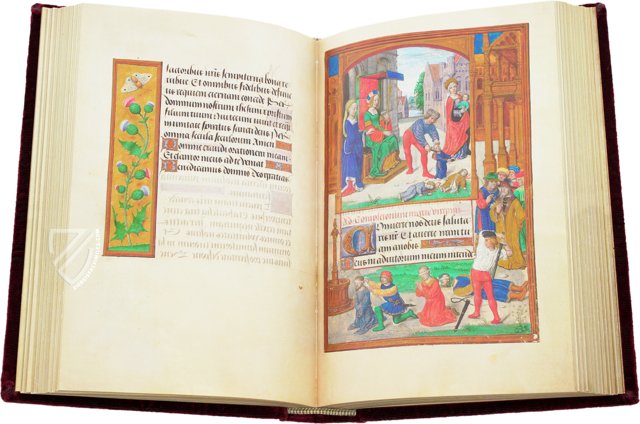 Saint Margaret and the Dragon

Margaret was a native of Antioch who committed her virginity to God despite the objections of her father, a pagan priest. She was tortured after refusing to denounce Christianity and marry the governor of the Roman Diocese of the East. Margaret was then swallowed by a dragon, but her holiness irritated the dragon’s innards and she emerged unharmed from the devilish beast, shown here still choking on her robes and looking back at the saint with a wide-eyed look of disbelief. 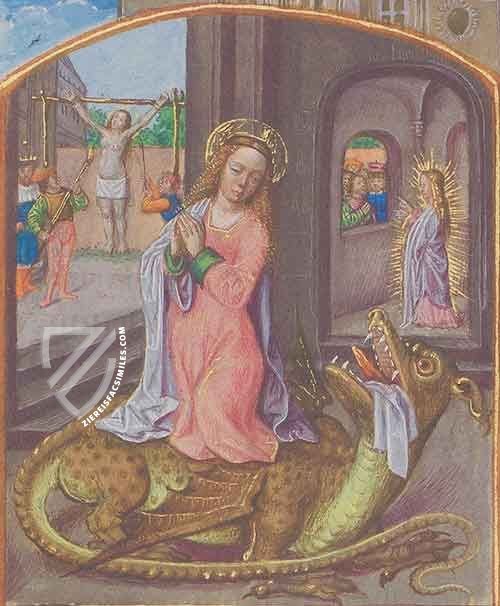 The Temptation of Adam and Eve

This truly masterful miniature combines some of the most popular scenes in Christian art. The “Fall of Man”, when the forbidden fruit is consumed, is presented in the primary image, while the “Expulsion”, when they are ejected from the Garden of Eden for defying God’s law, is presented in the frame, along with other consequences. The miniature is dynamic with a clear narrative that unfolds across the page.

The serpent winding around the tree takes the form of a woman at the head. We see the moment that Adam and Eve partake of the fruit, realize they are naked, and become ashamed. Sword in hand, an angel chases them from the Gothic gates of the Garden of Eden. We see them toiling in the bas-de-page miniature, while off to the left, we see the murder of Abel by his brother Cain. 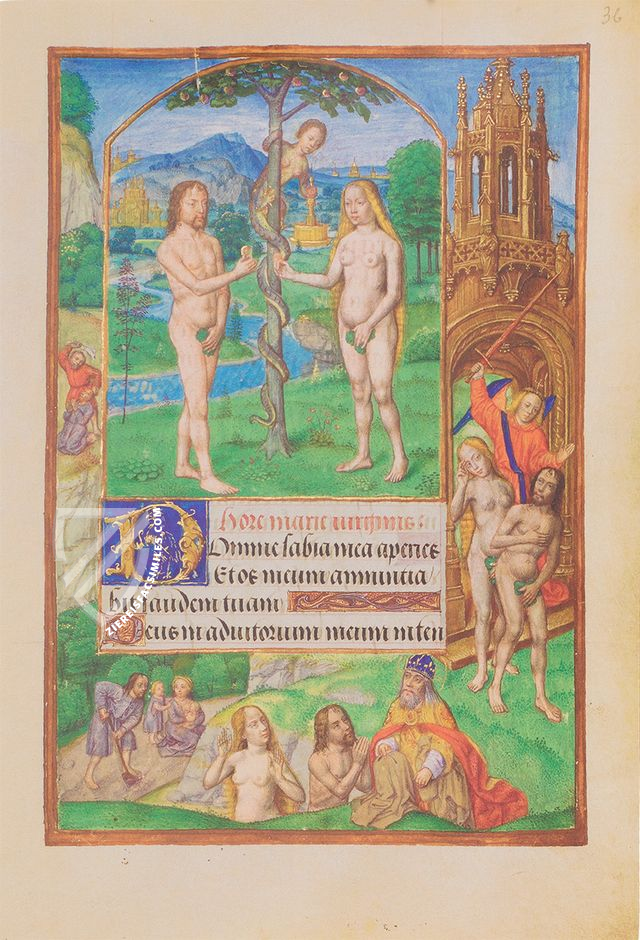 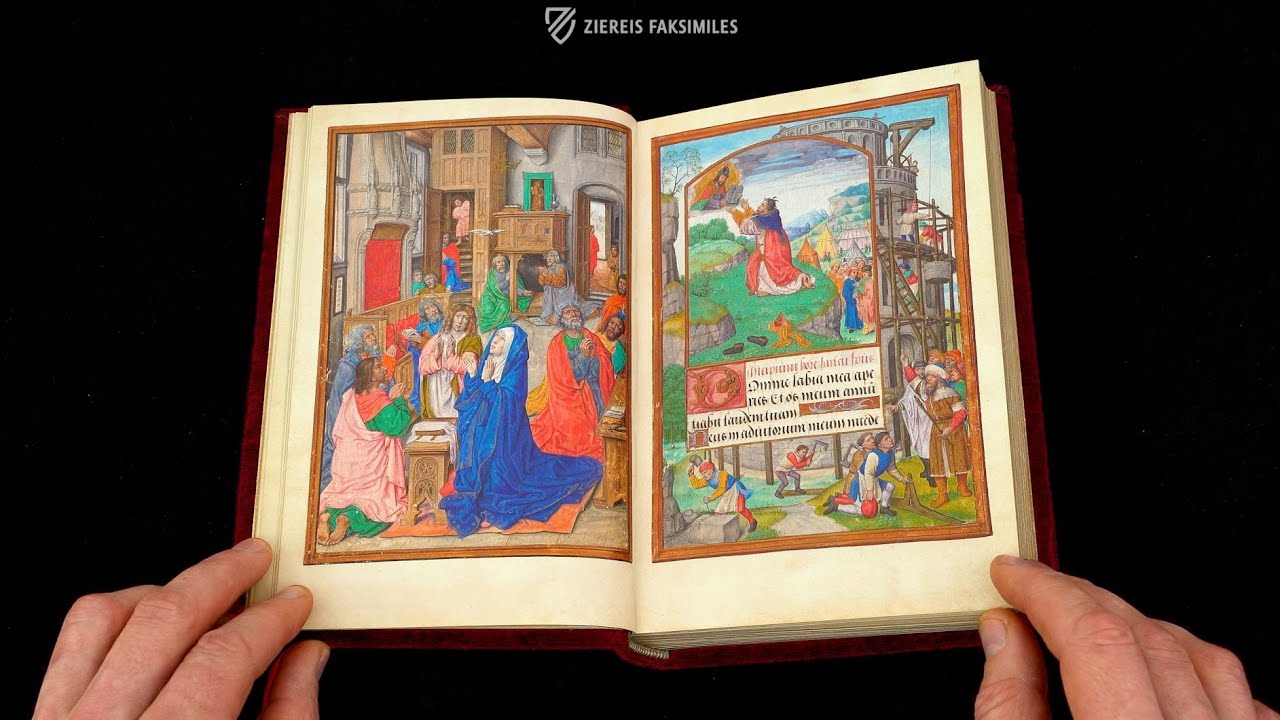 Publisher: Quaternio Verlag Luzern – Lucerne, 2011
Limited Edition: 680 copies
Binding: Faithful replica of original Renaissance binding: Burgundy-red velvet. Elaborately ornamented with silver and colored silk thread embroidery on both front and back covers, as well as the spine.
Commentary: 1 volume by Eberhard König and Peter J. Kidd
Languages: English, German
1 volume: Exact reproduction of the original document (extent, color and size) Reproduction of the entire original document as detailed as possible (scope, format, colors). The binding may not correspond to the original or current document binding.
Price Category: €€€ (3,000€ - 7,000€)
Edition available
Price: Log in here!
Order / Ask a Question
You might also be interested in: 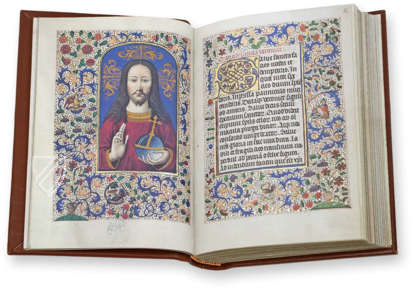 A luxury manuscript for an enigmatic noble patron, preserved today in the Vatican Library: wonderful Flemish illumination with golden accents in a splendid silver binding