The so-called Furs de Valencia are a collection of legal norms and precepts establishing the political and legal life in the Kingdom of Valencia during the Middle Ages. The code of laws evolved over many years and was first officially proclaimed in the year 1261, as James I of Valencia swore his oath of office. The specimen of the significant historical document at hand is furnished with gorgeously colored illustrations on precious golden backgrounds and numerous marginal decorations, as well as colorful initials.

The so-called Furs de Valencia is a collection of laws which were in effect in the Kingdom of Valencia during the Middle Ages and during the Early Modern Period. The legal code was a compilation of numerous legislative contracts and can be compared with a modern constitution. The Furs are one of the few surviving documents in existence that is a source about the separation of power, the monarchy, and the system of rights in medieval Europe. The political and historical significance of this influential codex is immeasurable. Numerous illustrations in vivid colors and with the lavish application of gold adorn the pages of the manuscripts as well as artfully designed, colorful historiated initials subdividing the significant text.

A Document of Historical Significance

The laws contained in the Furs de Valencia are based on various legal norms, which had already manifested themselves in Catalonian society before the beginning of the Middle Ages. The most important foundation thereof was the so-called Customs of Barcelona, which recorded the basic laws and rights of the citizens of Catalonia. Also, the common law of Lleida and the laws of Aragon were included in the creation of the handwritten list of rights. The Furs were officially proclaimed in the year 1261 by the first King of Valencia, James the Conqueror. In a solemn ceremony, he read the code of laws before the people and thereupon swore his oath of office as King of Valencia before the parliament that had been founded in the same year.

The Law of Catalonia

The Furs de Valencia regulated all aspects of political life in the Catalonian kingdom. It specified the succession to the throne, as well as regulating the separation of powers between the royal family, the nobility, the princes of the Catholic Church, and those in the legal field. This legal code remained in effect for more than four hundred years. Finally in the year 1707, the Furs were finally replaced by the Decretos de Nueva Planta – literally translated as the ordinances for complete renewal – which were signed by Philip V of Castile. Only recently, in the course of the amended agreement concerning the autonomy of the community of Valencia in the year 2006, a few precepts of citizenship from the Furs have been made binding once again. 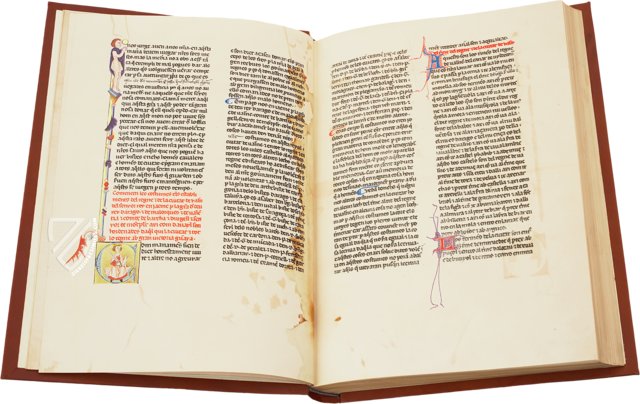 Aside from being a lawgiver and administrator, King James I the Conqueror also expanded the Crown of Aragon in three directions: to Languedoc in the north, the Balearic Islands to the Southeast, and Valencia to the south, which is how he became the first King of Valencia. This splendid “S” initial in delicate shades of pink and blue depicts the king enthroned with a drawn sword before a glimmering gold background. In the lower-left corner, the decorative border incorporates an animal head with large ears like a donkey. 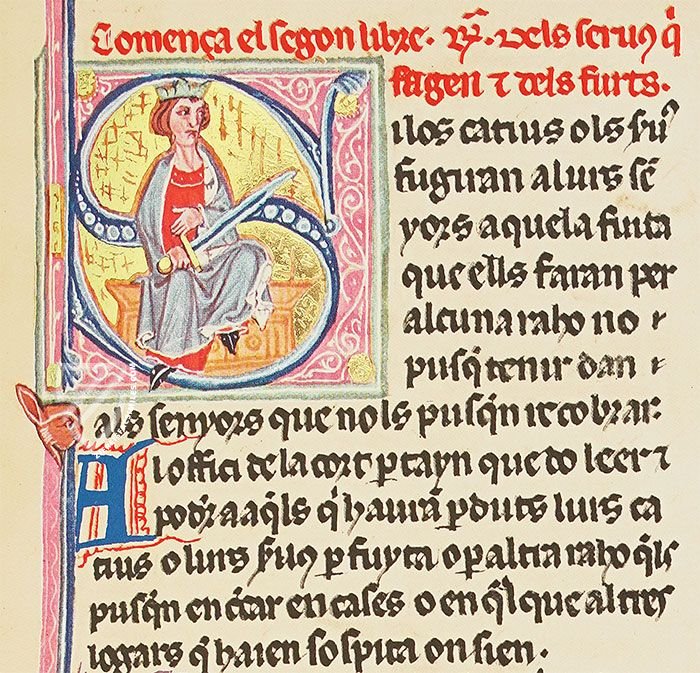 Here we see two columns of meticulously written text adorned with splendid borders populated by humans, animals, and drolleries. In the upper left corner, a golden miniature of a king is surrounded by two drolleries: a rabbit-like creature is dressed in the simple brown robes of a monk, below which an actual rabbit is depicted in a small medallion, and a human face with an ambiguous grey body.

Two soldiers, one armed with a sword and the other an axe, and two cranes flank the right column of text, above which a dragon with a vegetal tail appears. The bas-de-page shows a kneeling king being approached by Jesus with a book in his left hand and making the sign of benediction with his right as a lion, symbol of Christian courage, looks on. 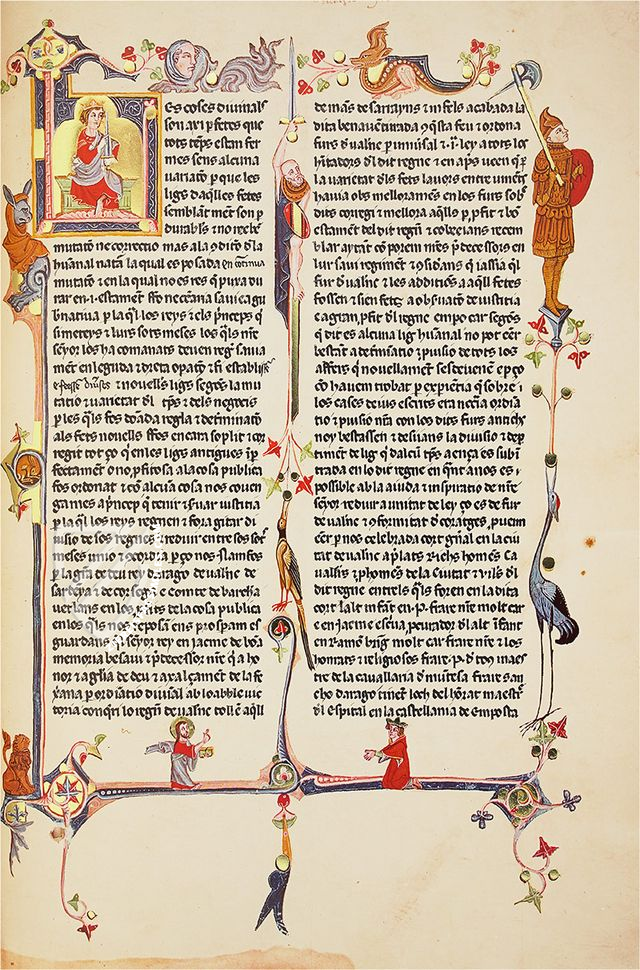 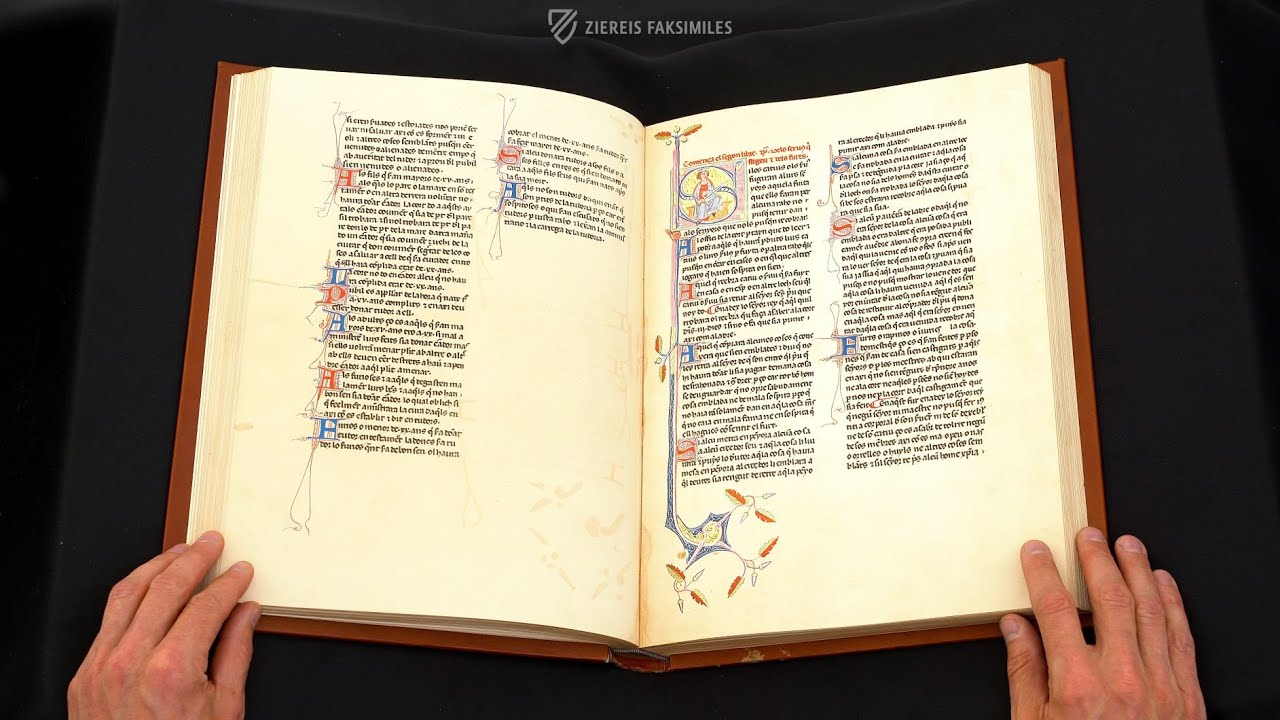 Publisher: Vicent Garcia Editores – Valencia, 1976
Limited Edition: 2000 copies
Binding: Engraved goatskin leather on wooden board with metallic shield Presented with the commentary volume in a slipcase
Commentary: 1 volume (274 pages) by Arcadi Garcia I Sanz and Alfons Guirau
Language: Spanish
1 volume: Exact reproduction of the original document (extent, color and size) Reproduction of the entire original document as detailed as possible (scope, format, colors). The binding may not correspond to the original or current document binding. Specially made paper with the same characteristics as the original. Limited edition numbered and signed by notary.
Price Category: €€ (1,000€ - 3,000€)
Edition available
Price: Log in here!
Order / Ask a Question
You might also be interested in: 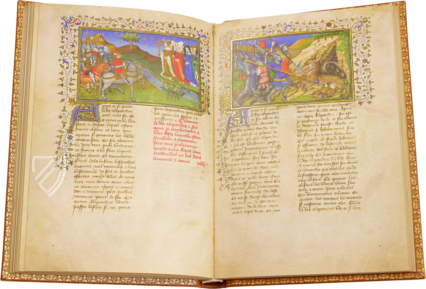