The Golden Psalter of Charlemagne, also known as Dagulf Psalter according to the name of the scribe who wrote it, is one of the few surviving Carolingian manuscripts that was made for personal use. A product of the so-called Palace School, work on it was begun in Worms and Metz between 783 and 789 before being finished in Aachen in 795. The Psalter may have originally been commissioned as a gift for Pope Adrian I, but it is believed that one of Charlemagne’s wives received it for her personal use. As personal manuscripts were rare in this period, particularly for lay-persons and even more so for women, this spectacular manuscript of imperial purple and gold was a particularly ostentatious sign of both power and sophistication.

The Golden Psalter of Charlemagne, also known as Dagulf Psalter according to the name of the scribe who wrote it, is among the regal manuscripts of the Palace School, i.e. among those jewels of illumination which were produced before the imperial coronation of Charlemagne in the year 800. The Psalter, a collection of 150 Psalms of the Old Testament, covers two decisive phases of the Carolingian school of painting. The section carried out between 783 and 789 may be identified as having been made in Worms and Metz, whereas the completion of the codex undoubtedly took place in Aachen between 790 and 795. The Golden Psalter thus constitutes a testimony to the evolution of the Palace School, which started in several places, but became fully developed after the establishment of the new capital in Aachen.

Both the size and design of the manuscript reveal that rather than being destined for use in public liturgy, it was intended for a private person. Who this person was remains unclear: it may have been originally intended as a gift to Pope Adrian I (r. 772–795), but he died before it was completed, and thus may have come into the possession of one of Charlemagne’s wives. Dagulf, the scribe, used a remarkable wealth of scripts to decorate his Psalter, as was customary in this period. The beautiful script undoubtedly ranks among the finest examples of early Carolingian minuscule which later played an important part in the development of the Roman script we use today. A major portion of the manuscript is referential to Dagulf who signed the book in a dedication poem to Charlemagne.

Illumination at its Very Best

All ornamental pages are lavishly executed and delight the viewer with their well-balanced harmony of colors and golden tones as well as with soft and rounded forms. A certain tension between the individual elements further enhances their charm. An element of improvisation is revealed in the frames and this playful character has contributed much to the book’s value. The predominant decorative form is the interlaced band which appears in a wide range of variations. Of all the ornamental pages, the frontispiece stands out due to its unusual coloring because it is dominated by blue tones, lacks a purple background, and the use of gold is reserved. 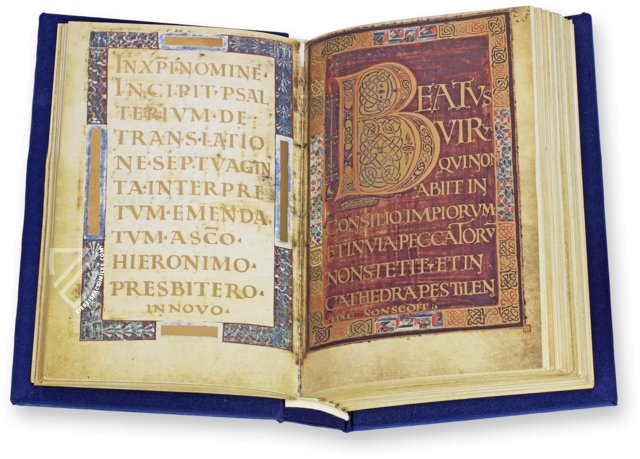 This is one of the few Carolingian manuscripts that can be clearly attributed to a specific artist or scribe and is the work of an accomplished monk named Dagulf. His masterful hand is evident throughout the codex but especially on the five elaborate incipit pages, which are exemplary of Carolingian illumination. The purple background contrasts beautifully with the generous use of gold leaf, making the Insular-style interlace all the more spectacular. 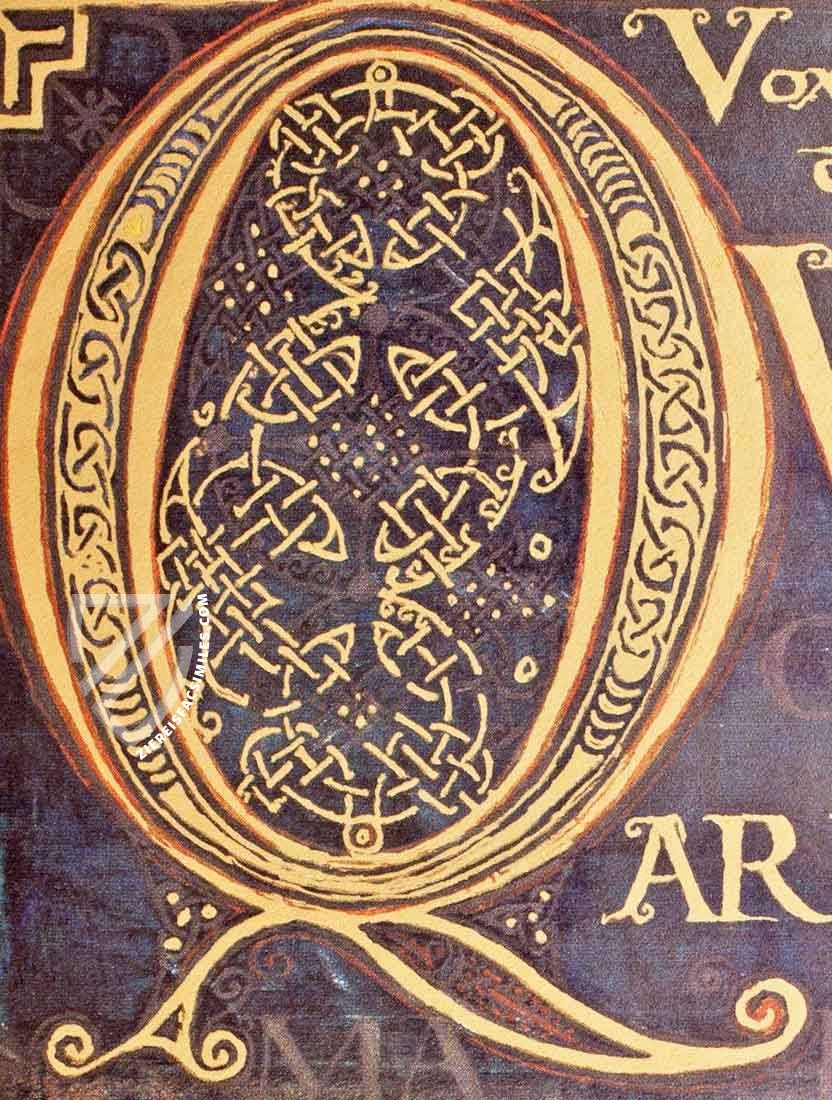 In the Vulgate Bible, the authoritative biblical text of the Middle Ages, the Book of Psalms begins with Beatus vir… or “Blessed is the man…” These words have appeared in various illuminated manuscripts on splendidly adorned incipit pages across the Middle Ages. This Psalter, created at the behest of the Emperor Charlemagne, is both one of the earliest and finest of these specimens.

It is no surprise that this incredibly rich and refined image comes from a manuscript made for Hildegard, the wife of the Emperor Charlemagne. It is a distinctly Carolingian incipit page: a detailed initial with Insular interlace patterns, generous use of gold leaf, and a dark purple background to both contrast the gold and indicate the imperial patronage of the manuscript. 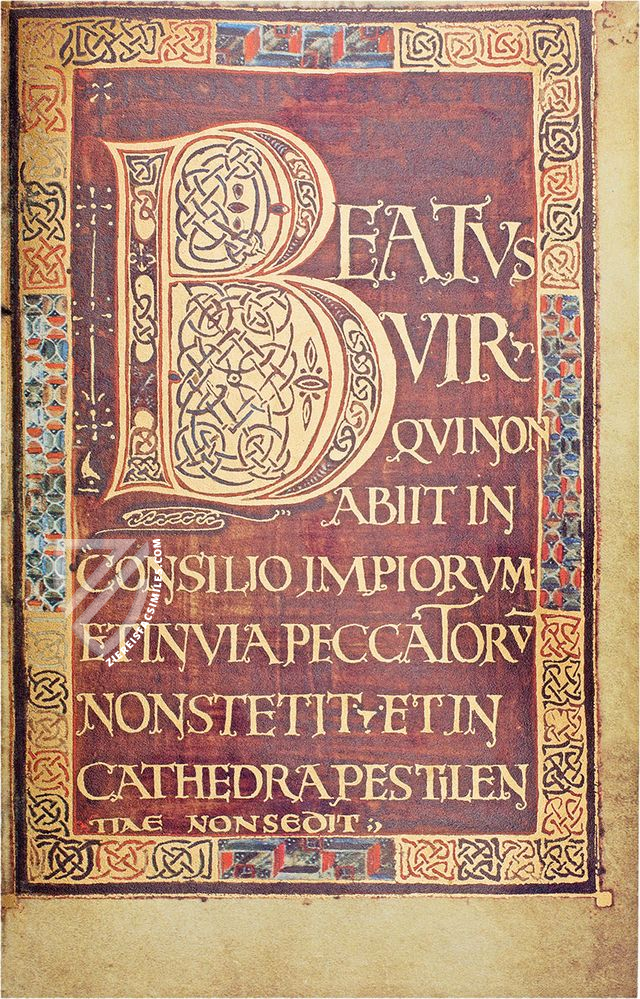 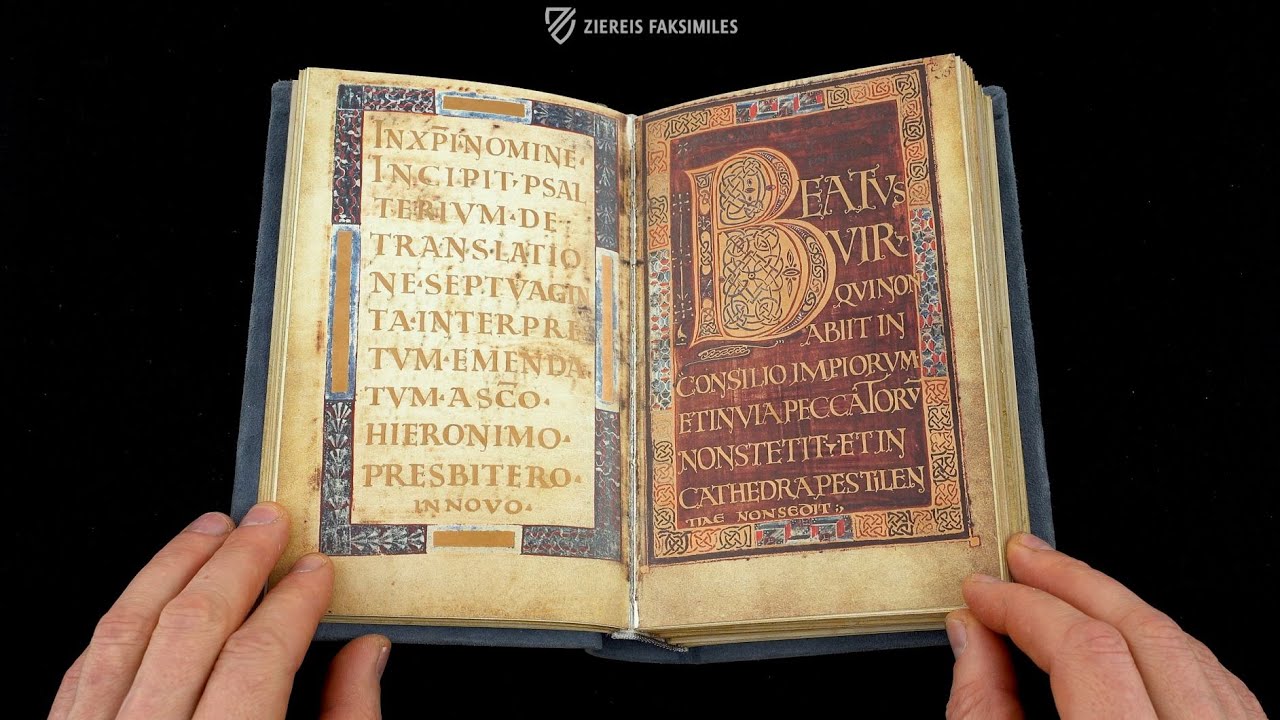 The commentary volume with 100 pages introduces you to the world of Emperor Charlemagne and explains in detail the magnificent illumination.
1 volume: Exact reproduction of the original document (extent, color and size) Reproduction of the entire original document as detailed as possible (scope, format, colors). The binding may not correspond to the original or current document binding.
Price Category: €€ (1,000€ - 3,000€)
Edition available
Price: Log in here!
Order / Ask a Question
You might also be interested in: 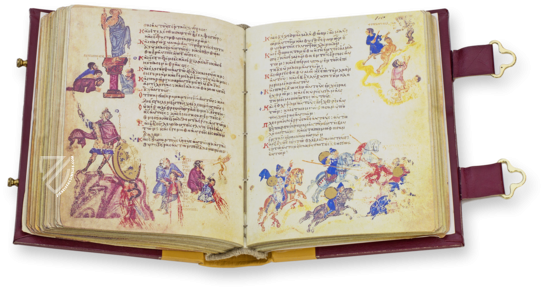