The State Archive of Tirana, Albania houses a wonderful assortment ca. 100 Byzantine and post-Byzantine manuscripts. Number 93 of that collection, the so-called Gospels of Korça, is a splendid 10th century Gospel Book produced during the Macedonian Renaissance, a blossoming of Byzantine art and culture in the 9th–11th centuries that corresponded with the reestablishment of the Byzantine Empire as the preeminent power of the Eastern Mediterranean. Originally produced in Constantinople, the Gospels of Korça was used and venerated as a holy artifact in the metropolis of Korça in modern Albania for centuries. The text, written in brown ink while red ink and gold was used for chapter titles, was formatted in the shape of a cross, which is rare among Byzantine manuscripts. Six Canon tables introduce the manuscript and Four Evangelist portraits depict the authors of the Gospels dressed in turquoise tunics and pink robes. Nearly every page of this splendid manuscript is adorned with floral, zoomorphic, and architectural motifs.

The Gospels of Korça is a precious religious and historical artifact that simultaneously gives art historians an inside view into the contemporary trends in the scriptoria of Constantinople as well as the lasting cultural legacy of Byzantium in modern Albania. The Gospel text, which has a rare cross-shaped format, was written in a round miniscule called *Bouletée by a masterful calligrapher. This is a unique work of Byzantine book art and is an expression of the revival of Byzantine power, wealth, and confidence during the 9th, 10th, and 11th centuries. It has been preserved as a special treasure in Albania for centuries, long after the collapse of the Byzantine Empire, and survives in remarkably good condition despite its regular use.

An Exemplary Specimen of Byzantine Art

The codex opens with six Eusebian canon tables, which are written in two columns flanked by three columns with decorative capitals, arches, and headings painted with gold. These architectural elements are accompanied by floral and zoomorphic motifs such as peacocks. Four full-page miniatures portray the Evangelists Matthew, Mark, Luke, and John as scribes copying books at the beginning of their respective Gospels. Each is depicted seated writing gold majuscule letters in an open book on their lap as they copy from another book resting on a lectern and are colorfully dressed in turquoise togas and pink robes before golden backgrounds.

Byzantine bookbinding is distinguished inter alia by its distinct external features and the decorative subjects on the covers. This codex consists of 308 thin, well-processed, white-colored parchment folios measuring 153 x 120 mm. When this codex was rebound in the 16th or 17th century, it was done with an authentic Byzantine-style binding consisting of leather-covered wooden boards that are barely larger than the pages. The covers are stamped with motifs consisting of a central frame with decorative floral bands running along the upper and lower edges. This authentic Byzantine binding has been carefully replicated for the facsimile edition.

The facsimile edition includes a combined commentary volume containing both volumes.
1 volume: Exact reproduction of the original document (extent, color and size) Reproduction of the entire original document as detailed as possible (scope, format, colors). The binding may not correspond to the original or current document binding.
Price Category: € (under 1,000€)
Edition available
Price: Login here!
Order / Ask a Question
You might also be interested in: 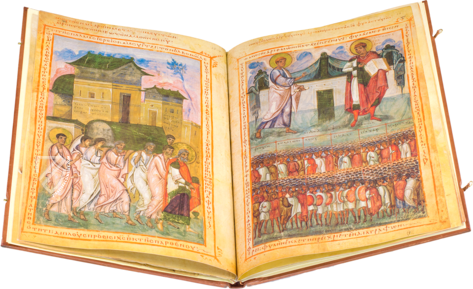 Made by order of the imperial treasurer Leo Patrikios: the oldest Byzantine picture Bible with the earliest depictions of saints in Christianity