During the 16th century, the Ottoman Empire enjoyed a cultural golden age that produced many incredible masterpieces of Islamic art. A love poem authored by no less than Sultan Suleiman the Magnificent was magnificently illuminated by the great master Kara Memi ca. 1566 with 370 unique floral patterns. As the leading artist at the Ottoman court in Istanbul, Kara Memi created a new naturalistic style that would last for centuries and would influence the décor of textiles, rugs, ceramics, and tiles.

The citizens of sixteenth-century Constantinople, renamed Istanbul, loved their flowers and gardens. Thanks to the imperial painting studio’s head artist Kara Memi (fl. 1545–66), silk goods, ceramics, and tiles also blossomed with tulips, carnations, and roses. When Kara Memi’s art merged with Sultan Suleiman’s verses, an unparalleled masterpiece of Ottoman art unfolded: the Muhibbî Dîvânı, filled with words of love and flowers of gold, illuminated in such detail that it takes a trained eye to distinguish all its hues. Kara Memi was so skilled that he created 370 unique floral patterns framing the text, all of which are presented here in a true masterpiece of Ottoman illumination. His artwork adorns a love poem written by Suleiman I (1494 –1566), commonly known as Suleiman the Magnificent, in a manuscript that was finished in the year 1566.

Master of the Ottoman Golden Age

Kara Memi was the greatest student of Şahkulu and developed a new naturalistic style that quickly spread to other arts practiced at the Ottoman court including textiles, rugs, ceramics, and tiles that survived for many centuries. His first historical mention can be found in a payroll register dated 1545 from the court of Suleiman the Magnificent. By the early 1550’s, he was the most highly paid illuminator of the Koran in the Sultan’s court and by 1557/58 he was the head painter. For the work at hand, he ultimately created 1,552 decorative panels called koltuk, which are rectangular panels framing a poem, and halkâr, golden décor shaded and highlighted with colorful pigments. These decorative elements using gold and silver leaf embellish a text concerning a woman as tall as a cypress trees with rosy-red cheeks who is worth as much as the Ottoman Empire. Specific flowers are depicted in great detail including roses, carnations, tulips, hyacinths, violets, lilies, calendulas, hollyhocks, anemones, spring blossoms, and more.

Sultan Suleiman I reigned during the Golden Age of the Ottoman Empire, a time when there was widespread interest in gardening and botany. Kara Memi was working in the tradition of the so-called Menazilname master, Matrakçı Nasuh (1480 – c. 1564), and Baba Nakkaş, an artist active at the Ottoman court during the reign of Sultan Mehmed II (1432-1481), known as Mehmed the Conqueror. Originally created at the behest of Suleiman the Magnificent, the manuscript has made its way from the Topkapı Palace Library to Yıldiz Palace Library before finally making its way to Istanbul University Library on the orders of Kemal Atatürk (ca. 1881-1938), the founding father of the Republic of Turkey.

The facsimile edition features the Turkish commentary and its English translation in two seperate volumes.
1 volume: Exact reproduction of the original document (extent, color and size) Reproduction of the entire original document as detailed as possible (scope, format, colors). The binding may not correspond to the original or current document binding.
Price Category: € (under 1,000€)
Edition available
Price: Login here!
Order / Ask a Question
You might also be interested in: 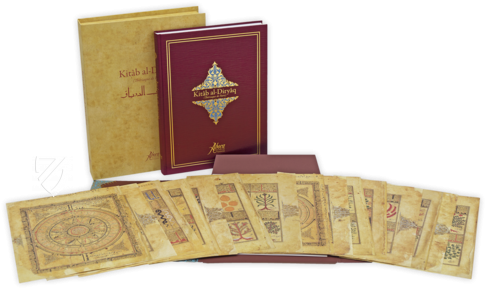 Wordless propaganda of the victorious Sultan Suleiman the Magnificent: an invitation to independently explore 107 exotic cities and mysterious landscapes he had recently conquered against the Persians