The Krumlov Picture Codex is, in many ways, a typical 14th century manuscript, both with respect to its content and its artistic character. Its subject matter consists of typological writings typical of the Late Middle Ages, such as a Biblia Pauperum, saints lives, and didactic narratives. The pictures in the Krumlov Codex are pen drawings, a technique that was widespread throughout Europe at the beginning of the 14th century, where it was mainly used for text books and scholarly manuscripts. These pen drawings were executed by three different hands which in spite of idiosyncrasies in style have created a harmonious ensemble. Favoring illustration over text, it was designed for the edification of both the lower clergy and illiterate commoners as well as wealthy noblemen and princes of the church.

The Krumlov Picture Codex is also known as liber depictus (painted book), because of its unusually rich pictorial decoration and due to an inscription on the title page. It is among the most precious manuscripts kept in the Austrian National Library, whence it came during the course of the Church reform under Joseph II which led to the dissolution of numerous monasteries. On a total of 172 parchment pages, the codex contains a Biblia Pauperum (Bible of the Poor), various lives of saints, and some narratives of a didactic character. Rather than being conceived as a scribal work to be illustrated at a later date, it was designed as a picture book whose contents are briefly explained in the picture titles. The numerous pen drawings executed by three different masters convey the religious contents in a devotional manner. The pious beholder may thus sink into the history of salvation with emphatic sensation and comprehend it rather with his heart than by reason. The Krumlov Picture Codex is probably the work of a team of artists active in the Minorite Monastery of Krumlov and was destined for use in the monastery itself. It was intended as a book of education for the lower clergy, emphasizing the picture rather than the word. This helped provide deeper satisfaction of the religious needs of this period than would have been possible with mere text.

The pictures in the Krumlov Codex are pen drawings, a technique that was widespread throughout Europe at the beginning of the 14th century, where it was mainly used for text books and scholarly manuscripts. These pen drawings were executed by three different hands which in spite of idiosyncrasies in style have created a harmonious ensemble. They illustrate the narrative in all detail, in a very lively and natural manner, truly exemplifying the pictorial effect of the liber depictus. The picture sequences, arranged above each other in two or three strips, are explained in brief passages of Latin text which accompany the illustrated narrative in the form of headlines. They were written by six different individuals in gothic minuscule and rarely occupy more than one line. Occasionally, pictures contain supplementary information, such as the name of a person, and also sentences in direct speech making the involved figures speak just like in modern comic strips.

A valuable reference to the date and place of origin of the Krumlov Picture Codex is found in the three full-page miniatures. The frontispiece, with a depiction of the Virgin as apocalyptic sun bride and the depiction of the Transfiguration (fol. 156r), establishes a direct relationship to the consecration of the Minorite monastery at Krumlov, which was inaugurated in 1358 in honore corporis et Virginis Mariae. The frontispiece also marks a decisive turn in medieval religious thinking, from speculative to visionary piousness, from the abstract to the concrete. Such a vivid picture book was less bound to convey concrete information than conceptual ideas of edifying episodes. Emphasizing the picture over the written word, it was not only a piece of religious art destined for the lower, illiterate classes of the population but also meant to more deeply satisfy the religious needs of the noble and monastic circles of that period. 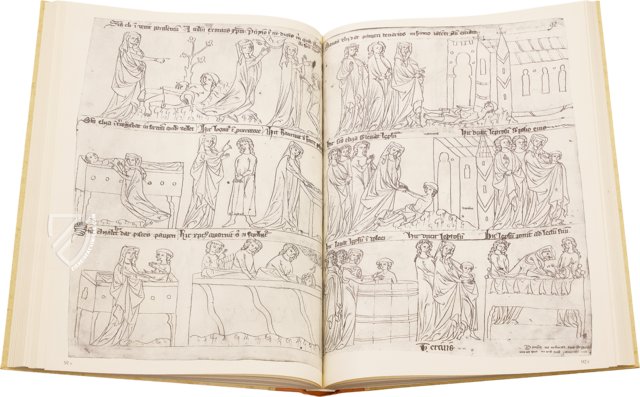 Christ Driving the Money Changers from the Temple

A popular theme in Christian art, perhaps because it is the only episode from the Gospels in which Jesus is handing out punishment instead of receiving it, the so-called “cleansing of the Temple” is part of the narrative of all four Gospels. However, most artistic depictions, including this one, are based upon St. John’s account, the only one to specify that Jesus used a whip of chords to drive man and beast alike out of the temple while pouring out the changer’s money and overturning their tables. 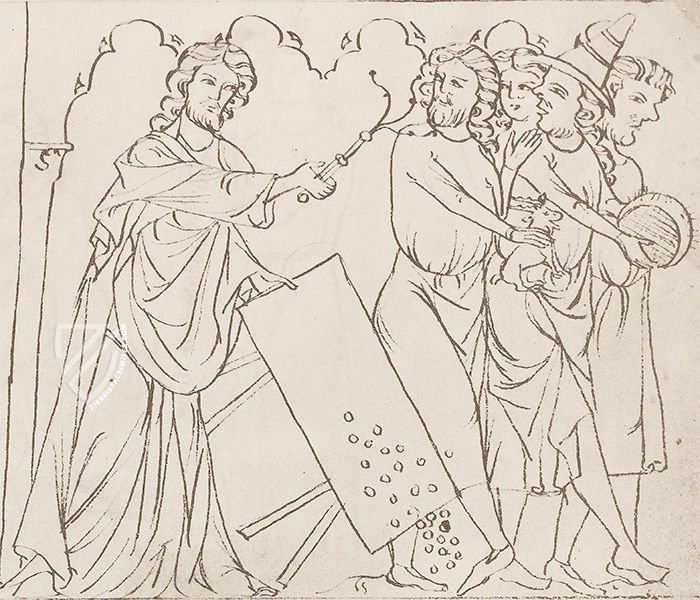 Harrowing of Hell, Resurrection, and Three Marys at the Tomb

Depicted in the lower register, the so-called Harrowing of Hell is an episode occurring after the Crucifixion in which Christ triumphantly descends to the underworld and brings salvation to the souls trapped there. He is depicted here knocking down the gates of Hell with his cross-staff and is met by a demon; both point and gesture as though debating with one another.

In the upper register, the resurrected Christ is shown emerging from his tomb and bearing the wounds of the Crucifixion, unlike in the lower register where his spirit is depicted unscathed, as the diminutive guards sleep. On the left, the Three Marys arrive at the empty tomb where they are greeted by an angel who tells them to seek Christ in Galilee. 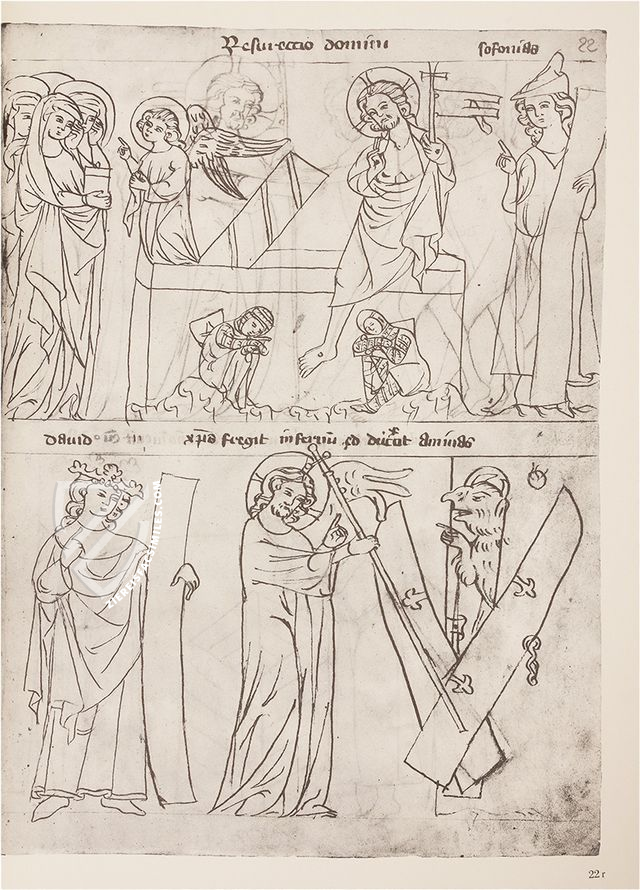 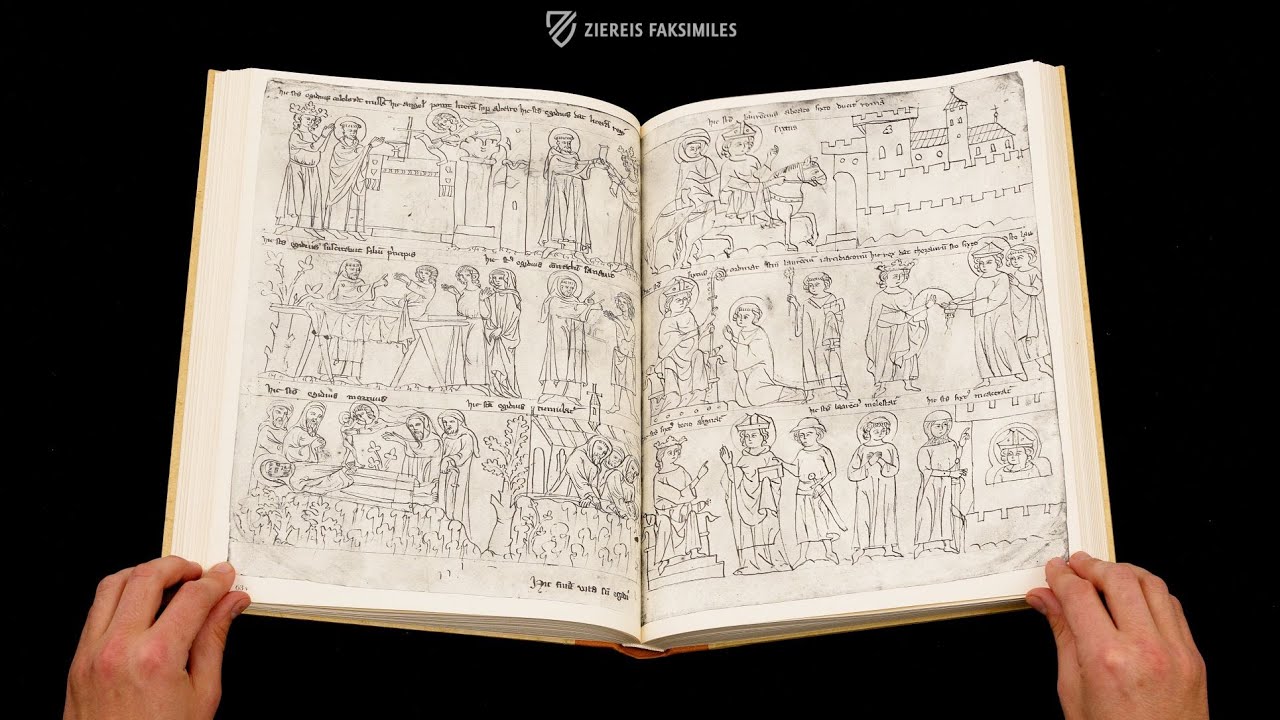 Publisher: Akademische Druck- u. Verlagsanstalt (ADEVA) – Graz, 1967
Binding: Leather spine, covers adorned with motifs from the manuscript
Commentary: 1 volume (123 pages) by Gerhard Schmidt and Franz Unterkircher
Language: German
1 volume: Exact reproduction of the original document (extent, color and size) Reproduction of the entire original document as detailed as possible (scope, format, colors). The binding may not correspond to the original or current document binding.
Regular price without login (like new)650 €
Log in for a Better Price!
Order / Ask a Question
You might also be interested in: 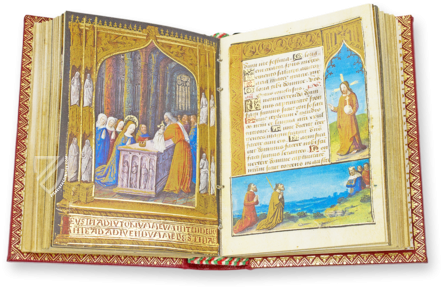 Every page illuminated, created by one of the greatest illuminators of the Middle Ages: a masterpiece by Jean Colombe, only rediscovered in a 2005 London auction, with full-page and even double-page miniatures 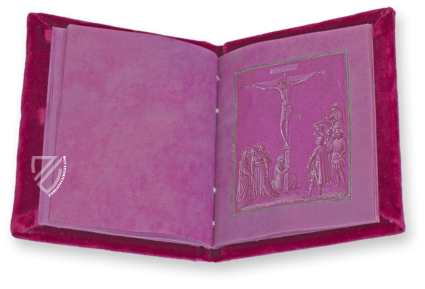