Georges de Challant was a scion of the rich noble Challant family, which resided in the Italian city of Aosta. The great art-lover dedicated his life to the financing of great paintings, manuscripts, and other works of Renaissance art. His missal, which was commissioned in the early 15th century, thereby represents one of the most beautiful handwritten and illuminated books of his collection. The large-format work contains liturgical texts in the finest calligraphy and is furnished with enchanting miniatures.

The medieval church of St. Peter and Orso in the Italian city of Aosta is in possession of some of the greatest masterpieces of late-medieval illumination. A particularly precious treasure of the ecclesiastical collection is the Missale Magnum Festivum Georgii Challandi, the missal of the noble art patron Georges de Challant. The missal that was personally commissioned by him contains 352 parchment pages with religious songs and texts and is illuminated with extraordinary artistry.

Georges was a descendant of the House of Challant, the most powerful and famous noble family in Aosta. Georges was the leader of the local church and was governor of the County of Aosta. He invested the majority of his wealth in legendarily precious ecclesiastical artistic treasures. He was soon counted among the most important art patrons in Italy at the time of the Renaissance. Among the numerous art book, which were financed by Challant, the Missale Magnum occupies a special place. It is probably the most personal work to survive from his private library.

The large-format, hand-illuminated missal consists of 176 double-sided parchment pages, not all of which are provided with a page number. Every page described contains texts in two finely-designed columns. The columns of text always consist of 28 lines. This well-thought-out system was not disrupted anywhere in the book. The incredibly high-quality, artistically attractive illustrations of the missal astound every beholder.

The full-page illustrations in the book display an incredible variety of scenic depictions of biblical stories and saints’ legends. For example, here one sees a Crucifixion scene, an Annunciation scene, as well as holiday-related scenes for important church feasts like Easter and Pentecost. Certain symbolic elements in the depictions, which are frequently inspired by nature, lend it as much meaning as the text itself. Never before were book illustrations of this kind made in Italy. Aside from the full-page miniatures, the borders are also visually designed in an enchanting way. Numerous golden initials round out the high-quality impression of the art book. 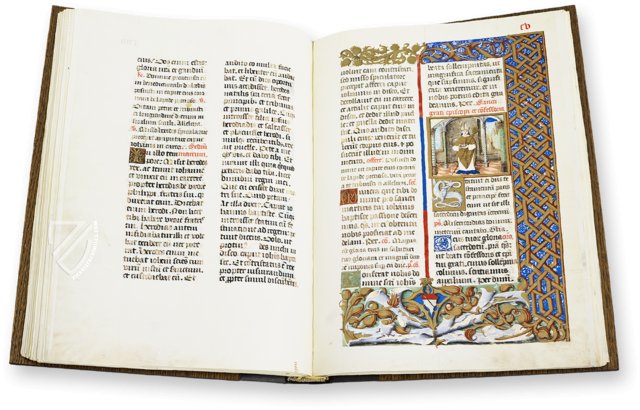 Dressed in the rich fashions of late-15th century Italy, King David is pictured having laid down his stylish cap and characteristic lyre upon receiving divine inspiration – perhaps for a new Psalm – in the form of golden rays of sunlight. He is shown kneeling in a Renaissance arcade with many carved patterns and figures. It was further adorned by the splendid frame with twisting columns, crossed horns, coats of arms, and a text neatly written in red and black ink. 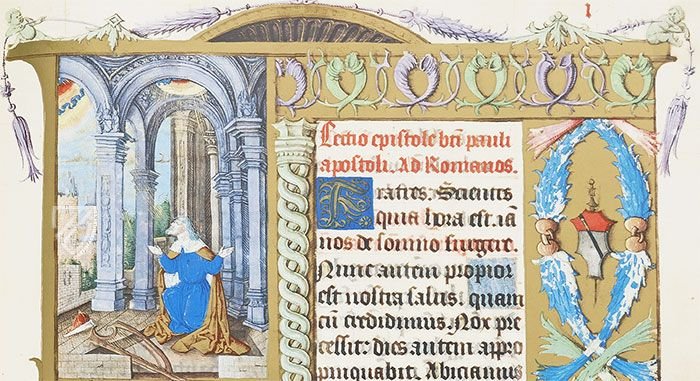 This manuscript was created with such artistry that even the text pages are magnificently embellished. The splendid tendrils are masterfully colored and shaded, as well as being presented before glimmering gold backgrounds. Of the two classically-styled vases, the grey specimen is particularly fine and is filled with cherubs and supported by two dragons.

The resurrected Christ emerges triumphantly from his tomb, pierced hand raised in benediction as the sun rises over his shoulders. His open robe reveals the bleeding spear wound in his side, and his torso is depicted according to classical ideals of the male form. The Roman legionaries, equipped with the arms and armor of 16th century soldiers, rub the sleepiness and wonder from their eyes. 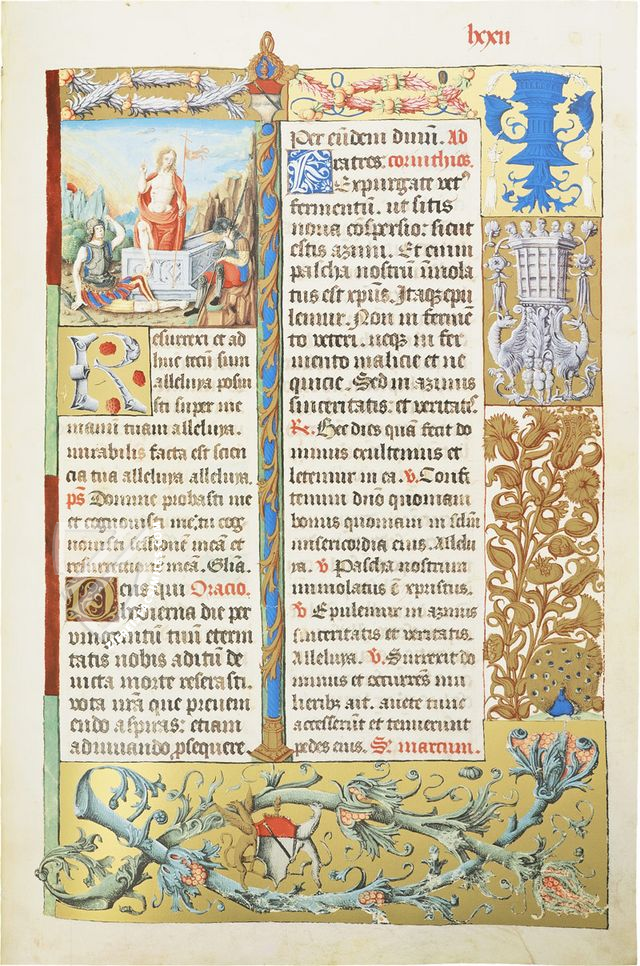 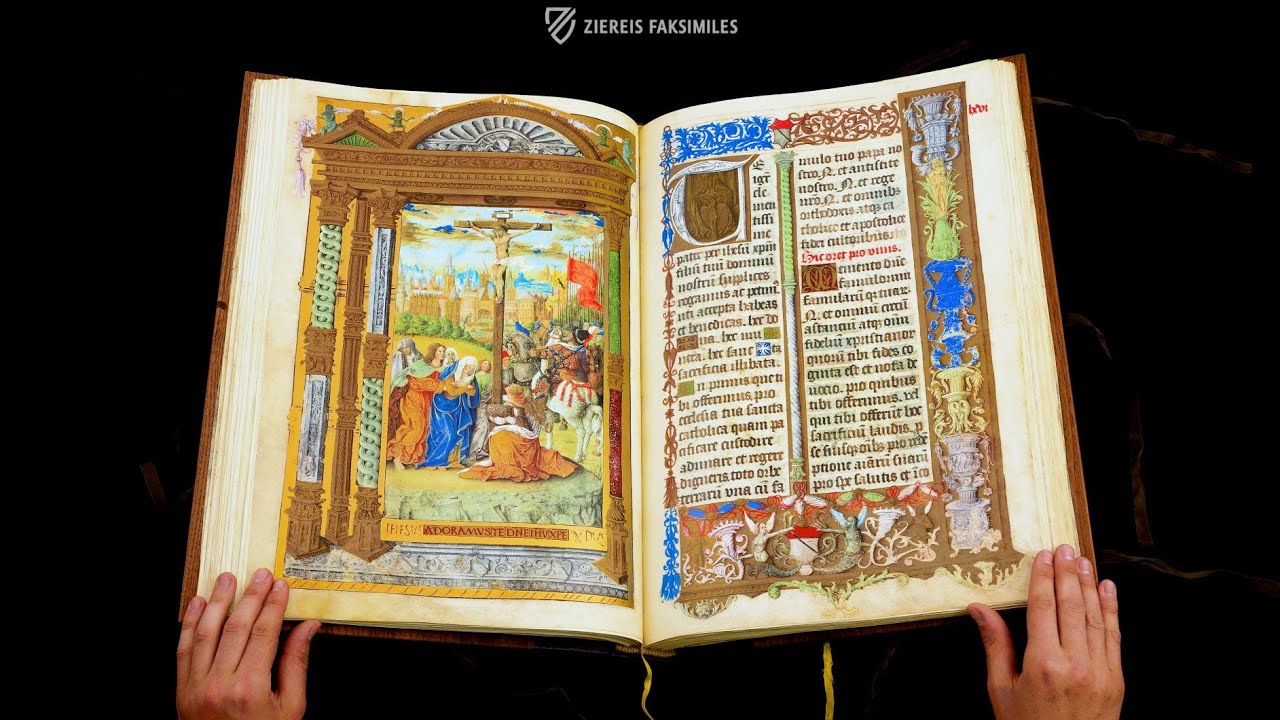 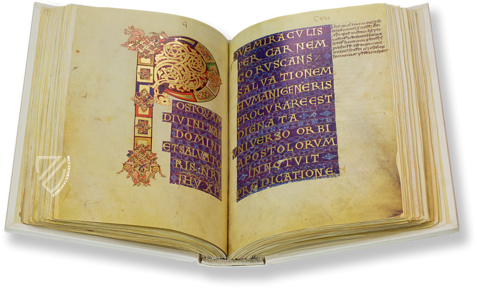 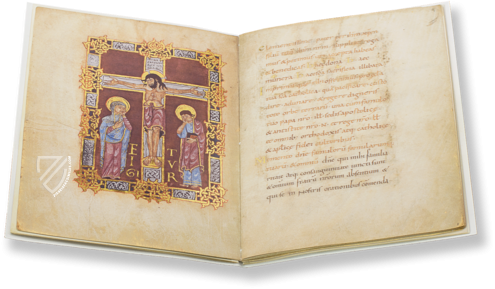 Sacramentary of Beauvais
Northern part of France – Around 1025

Adorned with gold and silver: ten beautifully illuminated leaves of a special sacramentary from the 11th century