The so-called Missal of Fra Angelico presents the illumination of the quattrocento in Florence in outstanding quality: from the hand of the main representative of the early Florentine Renaissance, Fra Angelico, and his most gifted student, Zanobi Strozzi. The liturgical chants for the feasts of various saints are illustrated in numerous outstanding miniatures. They are focused on Saint Dominic, the patron of the manuscript’s destination: the Convent of San Domenico in Fiesole, in which the Dominican monk Fra Angelico lived after 1420.

The so-called Missal of Fra Angelico presents the illumination of the Florentine Quattrocento in outstanding quality: from the hand of the main representative of the early Florentine Renaissance, Fra Angelico, and his most gifted student, Zanobi Strozzi. Liturgical hymns for the various saints’ holidays were illustrated in numerous outstanding miniatures. The focus lay thereby on St. Dominic, the patron saint of the manuscript’s intended destination: the Convent of San Domenico in Fiesole, wherein the Dominican Monk lived from 1420 onward.

The Leading Master of the Early Florentine Renaissance

Fra Angelico (before 1400–1455), also known as Beato Angelico in Italian, is one of the big names of Italian Renaissance painting. He entered the Dominican Order as Giovanni da Fiesole. From 1420 onward, we was active in the Dominican Convent of San Domenico in Fiesole, and later in the Covent of San Marco in Florence. There, Fra Angelico decorated the walls of the cloister and other rooms with grandiose paintings. Additionally, he was also active as an illuminator, several manuscripts from his hand have survived. One of which is the gorgeous missal from the Convent of San Domenico in Fiesole, originating in the years 1424–1430.

40 miniatures in the manuscript came from Fra Angelico, eleven more from Zanobi Strozzi, a student of the painting Dominican monk. Zanobi Strozzi (1412–1468) originated from the genteel Florentine Strozzi family, producing both panel paintings and miniatures and was active as an artist for the Medici inter alia. He was identified by Giorgio Vasari in his Lives of the Most Excellent Painters, Sculptors, and Architects as Fra Angelico’s most talented student.

The miniatures in Beato Angelico’s Missal give a wonderful overview of Florentine illumination at the beginning of the Quattrocento. The grandiose play with form and space characterizes the compositions and indicates the masterfulness of the painter. The paintings illustrate the hymns for the feast days of various saints. Saint Dominic – patron saint of the convent – is surrounded by musical angels, and is depicted in an exceedingly colorful scene. Fantastical flowers, vines, and similar, lavish ornamentation adorn the manuscript alongside depictions of the saints in large initials. As a synthesis of the arts, the missal is presented in exuberant luster and in the full glory of the fantastic art of the early Florentine Renaissance! 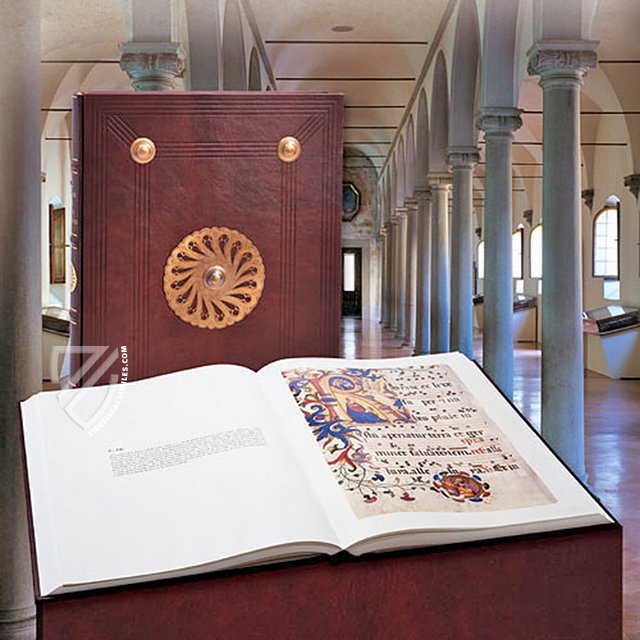 Vallecchi – Florence, 2005
Publisher: Vallecchi – Florence, 2005
Limited Edition: 600 copies
Binding: Bound in tooled leather with brass bosses and a center rosette. Binding inspired by Ms. 515 is closest to the original.
Commentary: 1 volume (208 pages) by Magnolia
Magnolia Scudieri, Maria Grazia Ciardi Dupré Dal Poggetto, Sara Giacomelli and Maria Paola Masini
Language: Italian
1 volume: Exact reproduction of the original document (extent, color and size) Reproduction of the entire original document as detailed as possible (scope, format, colors). The binding may not correspond to the original or current document binding. Both the facsimile and commentary are presented in one volume, the commentary appears among the pages of the facsimile. Printed on special paper from the Fedrigoni paper-mill of Verona The 44 illuminated pages of the facsimile are presented on a larger white background in full color.
Price Category: €€€ (3,000€ - 7,000€)
Edition available
Price: Log in here!
Order / Ask a Question
Blog articles worth reading