The Montserrat Collection offers the opportunity to own the three most precious and important books of hours on the Iberian Peninsula, all of which are superb examples of French and Flemish illumination from the late-15th and early-16th centuries. Included in the collection are the Book of Hours of Ippolita Maria Sforza created by Jean Bourdichon, the Liber Horarum Rothomagensis, and the Munich-Montserrat Hours created by Simon Bening. All are richly illuminated with refined miniatures and incredible marginal décor created using only the finest pigments and gold leaf.

A book of hours is a layperson’s prayer and devotional book for the liturgy of the hours. These were especially popular among rich and literate nobles in the Late Middle Ages. An outstanding example thereof was commissioned by Ippolita Maria Sforza (1446–1484). She was a member of the Sforza family, who ruled Lombardy from 1450 to 1535 as the dukes of Milan. The illuminated manuscript originated ca. 1495–1504 in the French capital of Paris. The beholder finds full- or half-page miniatures, historiated initials, and decorative bordures on nearly all of its 300 pages. Moreover, the richness of the plants and animals is noteworthy, resembling a complete bestiary.

Jean Bourdichon, born in tours ca. 1457, is responsible for the intensely colorful book decoration. As one of the most significant artists of the Early Renaissance, he worked for the French kings Louis XI, Charles VIII, and Louis XII. Unfortunately, since only a few of his works have survived, the Book of Hours of Ippolita Maria Sforza represents a true rarity. The elegant style of the illuminator is distinguished by its fine painting style – he repeats short brush strokes over and over again. In doing so, he is able to achieve plasticity and thus describe the materiality of various matter. Garments thus appear soft and flowing, while the metallic armor has an iron glisten.

With Bourdichon, the typical execution of a gold background corresponds to an impressive landscape depiction. Whether merely serving as a background or not, the artist devotes serious attention to them. He reproduces a small fishing boat on a calm sea. Both castles and small cities are indicated on the highly coats. All of this is draped in blue evening light. In the miniature of the Betrayal, Bourdichon even augments the clear night sky with scattered stars.

A Rich World of Plants and Animals

Hundreds of depictions of plants and animals accompany the primary figures, not only in the markedly beautiful bordures, but also in the miniatures themselves. Thus, John the Evangelist appears accompanied by a splendid eagle. It sits to the left of John with an open beak and arrayed plumage. All things considered, the biodiversity of the animals depicted is so great that in this regard that the book of hours resembles a complete medieval bestiary. In doing so, it is a fable allegorically connecting the moralizing characteristics of animals with the Christian doctrine of salvation.

The Liber Horarum Rothomagensis casts a spell on the beholder with its 48 full-page miniatures altogether. Adding to it are radiant floral décor and hundreds of gilded initials and calendar pages. The count of more than 1,000 figures, animals, and plants that enliven the miniatures is additionally impressive. The text of the book contains the liturgy of the hours. These were intended for the laity above all, but clerics also belonged among the recipients of book of hours later on. Unfortunately in this case, nothing certain can be said about its patron, but its precious décor indicates that they must have originated from the circles of rich and literate nobles.

A Book with Secrets

The question of the artist responsible for the splendid miniatures remains equally open. What can be known for certain, is that he was active in the Rouen school in northern France. We could possibly be dealing with the master of the Petrarch’s Trionfi and the Hours of Anne de Bretagne. Chronologically, the book of hours can be dated to the 15th or early 16th century.

The Mother of God at the Center

One thing will quickly become clear to the beholder of the welcoming miniatures: the rich image cycle is focused on the Virgin Mary. The artist devotes particular attention to her, in that he mostly consigns the central position to her. In the Nativity scene, she stands in the foreground with clearly youthful beauty, in contrast to the old-looking Joseph. Her luxurious cloak not only takes up much of the visual space, but also touches the naked boy turned toward her.

There is gold wherever one looks. The uniqueness of the manuscript is surely because of its remarkably rich gold décor. Nonetheless, it is not only the initials and bordures that are thus accentuated, but also the miniatures themselves. The contour drawing of the garments, halos, and other visual elements are furnished with gold. That the artist realized such a breathtaking effect is a particular means of expressing its value.

The small Munich-Montserrat Hours comes from the Belgian town of Bruges. There it originated ca. 1540, presumably at the behest of Alonso Idiaquez (1497–1547), who was the royal secretary for Carlos I of Spain. The book contains 19 full-page miniatures, 20 small initials, five large historiated initials, and 20 bordures with floral patterns on 468 pages. The extremely detailed paintings originate from Simon Bening (ca. 1483–1561), who was born in either Bruges or Antwerp. The Flemish miniature painter and illustrator was already praised during his own lifetime as the best master of illumination in all of Europe – and certainly not without good reason. An equally richly illustrated calendar opens the book with the liturgy of the hours for literate laymen.

The theme of the full-page miniatures is concentrated on the landscapes. The reader is shown stormy days with dramatic waves, the farmers’ summer harvest, chopping wood in winter, or the sheering of sheep consistent with the calendar year. Small subplots continuously guide the gaze of the beholder, urging them to constantly discover something new. It is impressive with what attention to detail Bening examines the seasons with their varying weather and which he attempted to portray as accurately as possible.

A Small Book in Many Places

Today, the small book is divided between Europe and the USA. The largest section of the manuscript is found in the Bibliotheca de la Abadía Montserrat in Barcelona. The remaining parts as well as the calendar and a few miniatures are stored in the Bayerische Staatsbibliothek in München. The two miniatures of the Mass of Saint Gregory and the Martyrdom of St. Sebastian are found today in the J. Paul Getty Museum in Los Angeles. 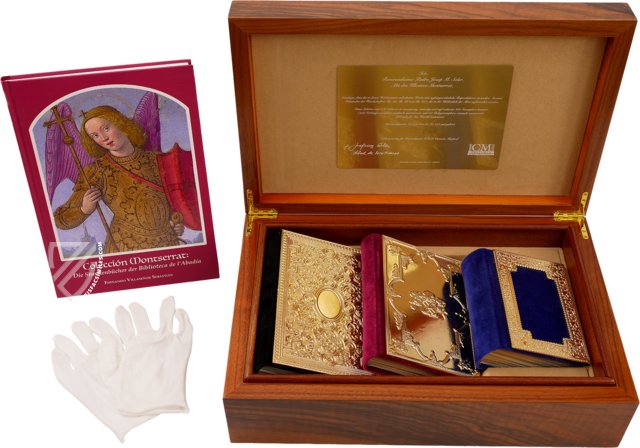 This is an exemplary specimen of French Renaissance illumination: Christ is shown bleeding from multiple wounds and crowned with thorns as one of the guards points to him. Helmets and spears indicate a throng of soldiers behind them. “When Pilate saw that he could prevail nothing, but that rather a tumult was made, he took water, and washed his hands before the multitude, saying, I am innocent of the blood of this just person: see ye to it.” (Matt. 27:24). 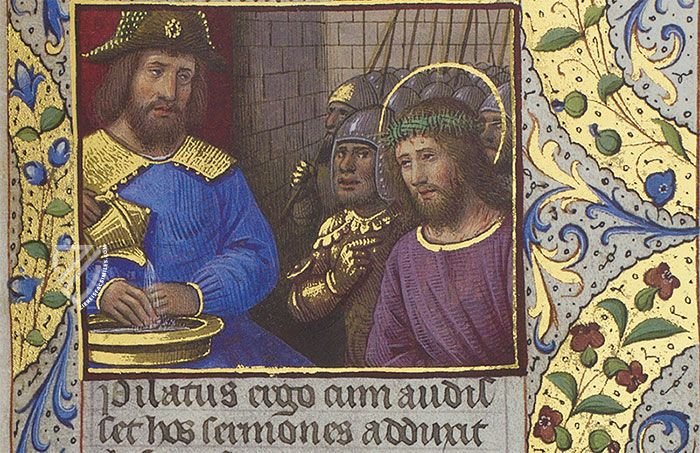 While Adam is sleeping underneath a tree heavy with fruit, Eve emerges from his side and is blessed by God the Father, who is dressed in luxurious robes and a papal tiara highlighted with precious gold. Adam and Eve are depicted twice more in the distance: eating from the Tree of Knowledge on the left and being subsequently chased from Paradise by an angel on the right.

The Garden of Eden is depicted as being incredibly lush with Adam lying on a soft bed of green leaves and various animals either drinking from the stream or wandering about the trees. In this stream we see the Fountain of Life, carved with figures in the Gothic style. Tree-covered hills and mountains appear blurred in the distance as though the Garden were enshrouded in a protective haze. 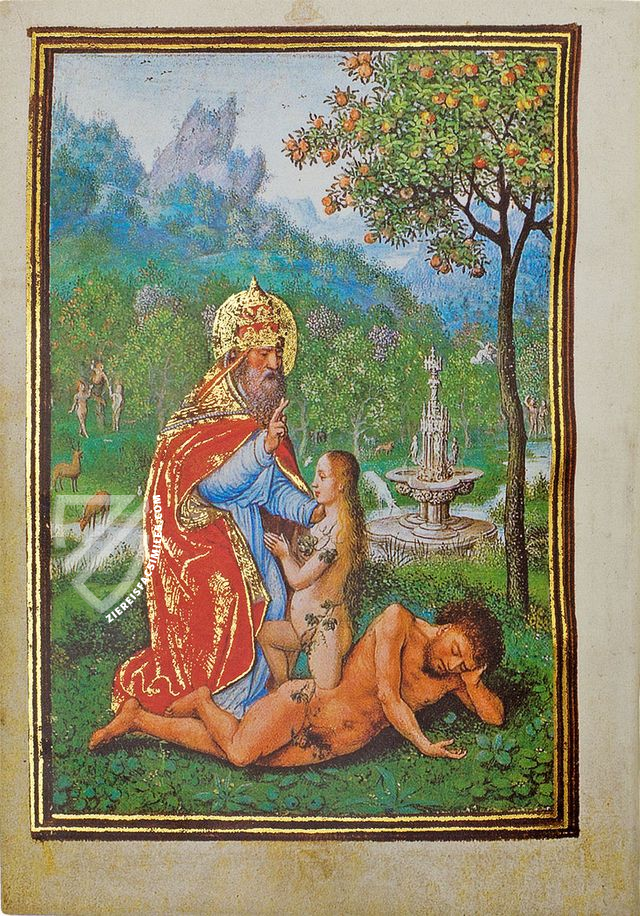 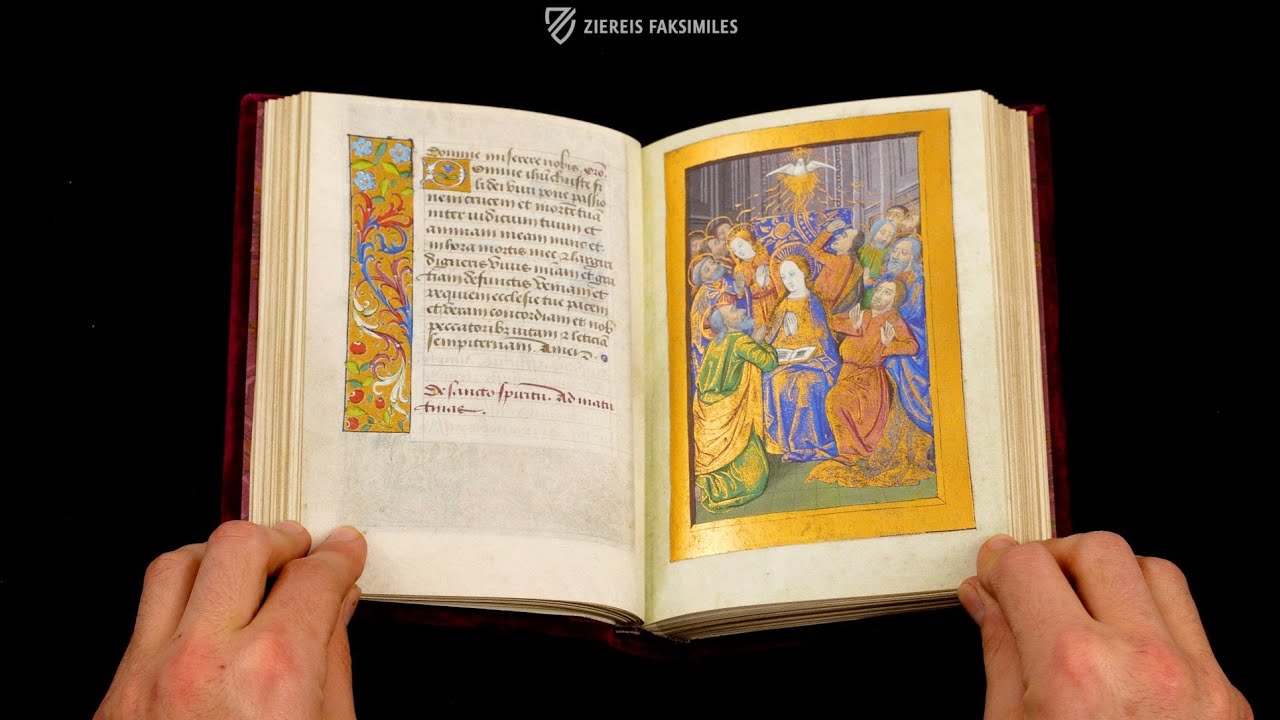 Publisher: CM Editores – Salamanca, 2014
Limited Edition: 375 copies
Binding: Silk-velvet binding featuring original motifs: Gold-colored metal plates on the front and back covers with a specially-manufactured "pergamento stucco" impression by Fedrigoni and a "cracked" gold stamp identical to the original. Luxury wooden box
Commentary: 1 volume by Fernando S. Villaseñor
Language: German
3 volumes: Exact reproduction of the original document (extent, color and size) Reproduction of the entire original document as detailed as possible (scope, format, colors). The binding may not correspond to the original or current document binding. This facsimile edition features the Book of Hours of Ippolita Maria Sforza, the Liber Horarum Rothomagensis, and the Munich-Montserrat Hours.
Regular price without login (like new)16,980 €
Log in for a Better Price!
Order / Ask a Question
You might also be interested in: 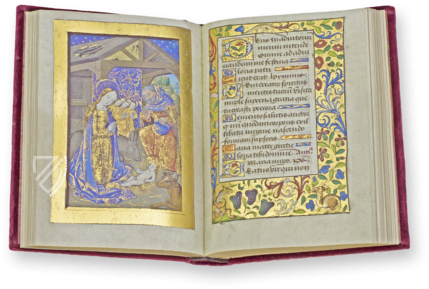 Exuberant book decoration in a breathtakingly beautiful but enigmatic Renaissance manuscript: 1,000+ gold-decorated figures, animals, and plants by an unknown artistic genius for an anonymous patron 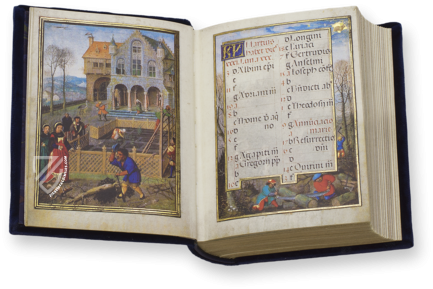