The Munich Golden Psalter was created at the beginning of the 13th century, presumably by three Oxford illuminators. This exceptionally richly illustrated and decorated codex contains numerous miniatures against a gold background, golden written elements, and costly gold initials, as well as countless other decorative elements. The Munich Psalter is especially famous for its unusual new style of illumination, which marks the transition from the Romanesque to the Gothic style. Its elaborate image program consists of 91 full-page miniatures with gold backgrounds, 24 calendar medallions, and 10 large historiated initials as well as decorative red and blue lines, animals, human heads, and hybrid creatures integrated into the text. As such, the richly illuminated manuscript is considered to be the most precious Psalter to have ever been created.

At the end of the 12th century, private devotional books became increasingly popular with the educated upper crust of society. The demand for psalters was especially great. These were collections of Psalms, which were used daily in mass. Among the numerous psalters of this time, at the beginning of the 13th century, the Munich Golden Psalter is presumed to have been created by three masters from Oxford. This work is considered to be the most valuable Psalter to have been made in any epoch due to its exceptionally rich book decoration and its innovative artistic expression. The opulent codex contains 166 pages with 91 full-page miniatures with gold backgrounds, 24 calendar medallions, colorful and gold-decorated initial pictures, as well as colorful trimmed lines on every page. Today this magnificent manuscript is located in the Munich City Library.

A Book Trend of the Middle Ages

As a rule, a psalter contains 150 prayers and hymns, which do not tell any kind of cohesive story but consisted of glorifications of God, entreaties, grievances, and thanks instead. Even today the Psalms are considered to be one of the most important parts of Christian and Jewish liturgy. In the Middle Ages the demand for these easily understandable texts was rapidly rising. These works enjoyed an especially great popularity in England and northern France. The most gifted and well-versed illuminators of this genre came mostly from England. It is presumed that the masters who created the Munich Golden Psalter were three artists from Oxford.

In the majority of psalter handbooks the miniatures and picture cycles of the Old and New Testaments are concentrated at the beginning of the work. However, the Munich Golden Psalter was arranged differently. The codex begins with 24 impressive calendar medallions, which are followed by 27 full-page miniatures of Genesis, the story of Joseph, the flight from Egypt, and up to the fall of Jericho. Finally, 19 pictures of the New Testament thematized the life of Jesus Christ. This cycle ends with depictions of Judgement Day and the torments of hell. This is followed by miniatures that show the various miracles of Jesus, stories from the Old Testament books, Ruth, Judith, and Esther are pictorially depicted, as is the life of King David. David is considered to be the creator, which is to say the author, of a large number of the Psalms. No other Psalter has anywhere near such a wealth of pictures.

New Form of Expression and Ornamentation

The Psalms of the Munich Golden Psalter were decorated in unbounded fantasy with whole page golden figural initials, half page miniature-like initials, multicolored bows and ribbons, and intertwined tendrils. The time of the work’s creation between 1180 and 1220 is considered to be the transitional style of English book painting. Artists at the end of the Romanesque era sought new forms of pictorial expression, but were still somewhat removed from Gothic illumination. Depictions of figures were less expressive. Human bodies were still not precisely portrayed, however attention was now paid to more correct and less exaggerated proportions and posture. Meticulously modeled faces, flowing garments, shading, and color gradiation characterize the pictures of the Munich Psalter. All of these endeavors by the artists point the way to a new, more natural style of book painting. 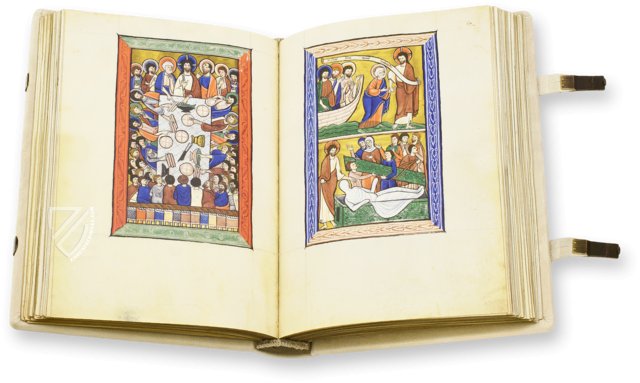 Historiated initials are a prominent feature of Romanesque manuscripts with artists devoting as much energy to their creation as they did to the miniatures. This “O” initial is filled with white lions that run around a mythical creature playing the harp. A drollery with the body of a peacock holds the severed head of a bearded man in its mouth in the upper left corner. This historiated initial is a kaleidoscope of colors and gold leaf with a diamond-patterned background and winding tendrils. 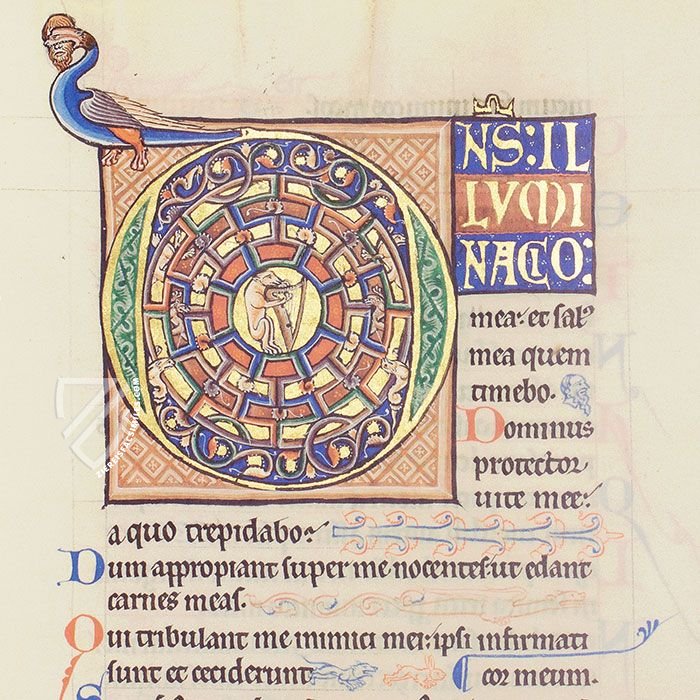 The Temptation of Christ

After his baptism by John the Baptist, Jesus went to the Judean Desert to fast for 40 days and nights, during which time he was tempted by Satan. This innovative miniature depicts this series of events in a single image contained within a lovely frame of delicate pink and night blue.

The timeless and spaceless effect of the burnished gold background allows the narrative to travel across the page. Starting at the bottom, Satan tempts Jesus by offering to turn stones into bread. Moving up and to the left, we see the temptation on the mountain, where Satan offers Jesus dominion over all earthly kingdoms. The final image at the top shows the temptation on the pinnacle of the temple, resisting Satan once again before being ministered to by angels. 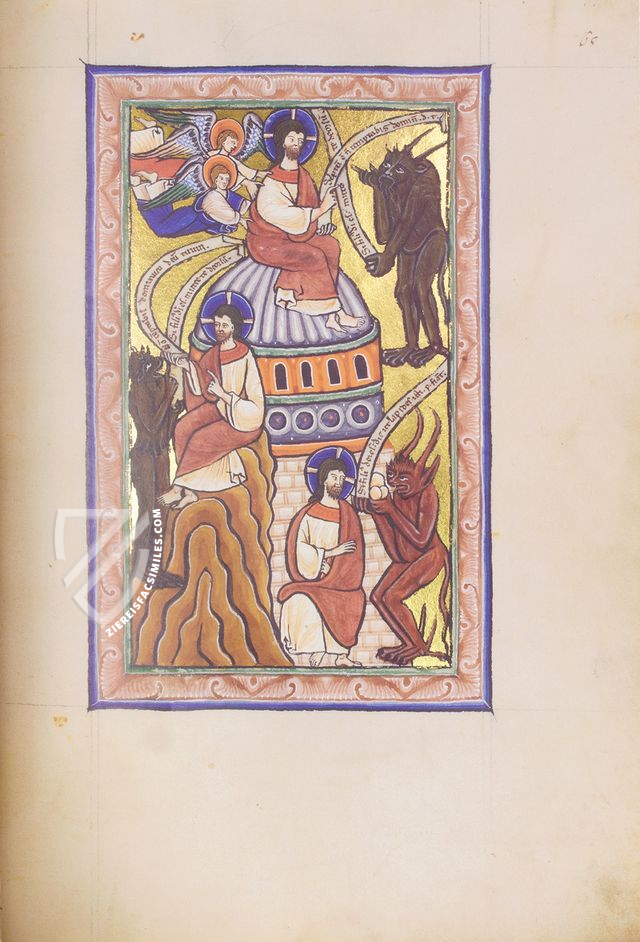 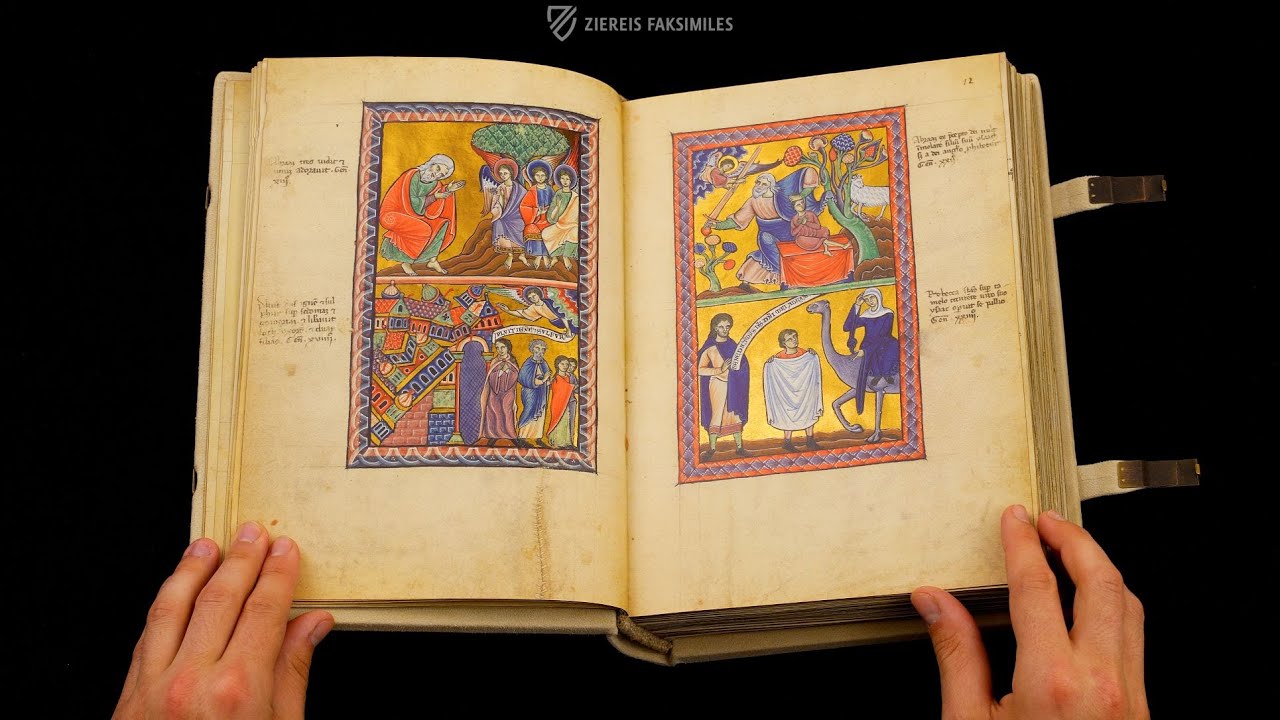 Created by one of the greatest masters of English illumination: seven parchment fragments of a lost masterpiece by William de Brailes 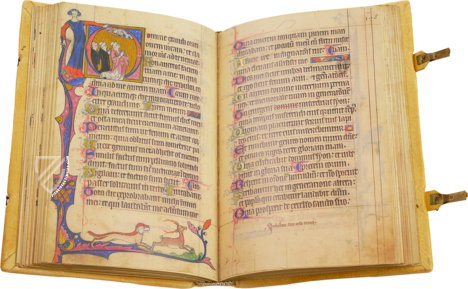 Created by English artist-monks for their own use at Ramsey Abbey: a unique Psalter with beautiful miniatures of fine Gothic figures of unparalleled vividness 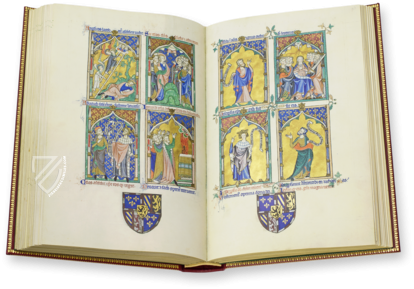 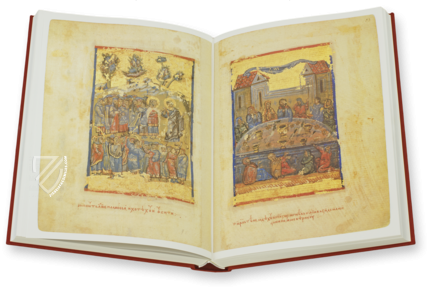