This manuscript is one of the most lavishly decorated specimens of the New Testament created during the Middle Ages. It originated from Italy sometime during the 1230’s and 1240’s and consists of a calendar and the complete text of the New Testament. Shining with silver and gold, it is one of the finest specimens in the Vatican Library and is adorned by over 100 magnificent miniatures including 4 full-page images, 26 large, sometimes historiated initials, and hundreds of smaller initials in red and blue ink. Influences from various artistic styles, foremost from Byzantine book art, can be seen in the artistic program. Scholars continue to debate where, by whom, and for whom the manuscript was made, but it is nonetheless highly regarded as an exemplary specimen of Italian Gothic illumination.

The New Testament of the Bible forms, along with the Old Testament, the Word of God and the foundation of the Christian faith. In the New Testament, Jesus Christ is proclaimed to be the Son of God and the Messiah come for the salvation of Israel and the cosmos. The scripts of the New Testament were recorded initially in Greek and later in Latin. An outstanding illuminated Latin manuscript of the New Testament originating from Italy during the second quarter of the 13th century can be found today in the Vatican Library. It is the largest and most elaborately illuminated of a group of New Testament manuscripts created in Italy beginning during the 1230’s.
While many point to the strong Byzantine influence in the manuscript to argue for its origins in Southern Italy, others claim that it originated from Verona based upon the calendar, which is in accordance with the liturgical celebrations of Verona, and script, which was written by at least two scribes in a slightly rounded form of Gothic textualis imported from France and commonly used in the Veneto during this period. Regardless of its precise origins, this codex stands out among all the treasures of the Vatican Library and still astounds the beholder to this day. The mysterious origins of the manuscript and the circumstances under which it was likely created only increase its allure for researchers and bibliophiles alike.

Probably originating during the 1240’s or 1250’s, the Vatican Library’s copy of the New Testament is a manuscript lavishly adorned in the short-lived Italian Gothic style. The Latin text was illustrated with over 100 vivid miniatures. The richly colored pictures, ornamented with gold and silver visualize the dramatic events of the life of Jesus Christ and complete the handwritten text in a most outstanding way. Nearly every page of the manuscript is adorned and if the page does not feature a miniature, the text passages are ennobled with richly decorated acanthus leaf initials with gold and silver backgrounds as well as smaller initials in blue and red ink.
Some of the 26 large decorative initials are historiated with dragons and human figures, some of whom climb the initials like ladders. Miniatures are embedded in the corresponding text passages of the Gospels and the Acts of the Apostles while the Book of Revelations is elaborately adorned by a miniature cycle in the margins. There are also four full-page miniatures, two depicting the Crucifixion with gold and silver backgrounds, one the Throne of Mercy, and one of the Madonna and Child. This sumptuous artistic program and the expensive materials used to create it makes this is an unimaginably valuable codex.

A Complete Copy of the New Testament

This is an unusual, even perplexing manuscript. Despite being furnished with a calendar listing religious feasts, there is no liturgical use for a complete copy of the New Testament because the priest is forced to leaf through the pages searching for the relevant biblical passage. However, the last miniature in the manuscript – a full-page depiction of a male figure kneeling before an enthroned Madonna and Child as though he were paying homage to a liege lord – offers a clue with regard to the manuscript’s purpose. Rather than being made for liturgical use in front of a congregation, the manuscript was created in a lay workshop for private use by a layperson. There is evidence that the Verona Cathedral’s scriptorium was in disarray and was unproductive during the late-12th and most of the 13th century, which would create a vacuum for lay workshops to fill.

The kneeling figure is not identified by name or coat of arms, but his humble dress of a short dark tunic and stockings indicates that he may have been a member of a lay penitential confraternity. These organizations were popular in Northern Italy at the time and their members wore austere garments. During this period, lay confraternities were transitioning from independent associations to being overseen by Dominican and Franciscan friars who served as advisors. They were largely concerned with countering heresy and thus its members needed a comprehensive knowledge of the New Testament. Furthermore, sixty heretics from among the most prominent families in Verona were burnt at the stake in 1233, and the anonymous patron kneeling at the feet of the Virgin Mary may have been a witness to this fiery purge. 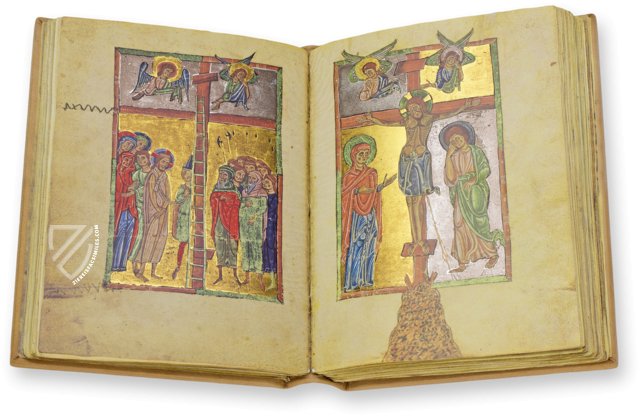 Jesus walking upon the Sea of Galilee as though it were a grass field is one of the most important and iconic episodes in the Gospels. This extraordinary demonstration of Jesus’ power over nature solidified the faith of the Twelve Apostles. “Then the sea arose because a great wind was blowing. So when they had rowed about three or four miles, they saw Jesus walking on the sea and drawing near the boat; and they were afraid. But He said to them, ‘It is I; do not be afraid’.” (Jn 6:18-20) 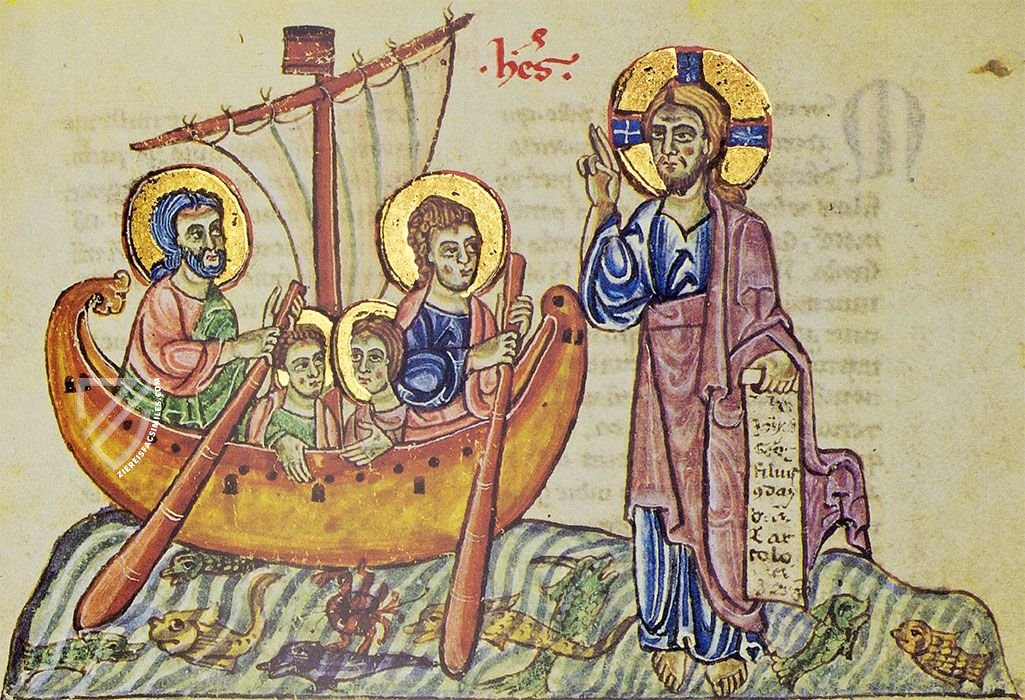 Here was have an Italian Gothic miniature exhibiting a strong Byzantine influence, relying on the power of gesture and iconography to balance its static and solemn composition. The miniature’s background is composed of alternating fields of burnished silver and gold. Furthermore, the angels’ halos alternate depending upon the background, while Mary’s and Joseph’s are colored and patterned.

This miniature is presented in such a way as to make it seem like the frame and other figures are being held up behind Christ crucified. The cross and specifically the hill of Golgotha stand outside of the frame of green and red, creating a strange sense of perspective that causes the eye to wander back and forth across the page. 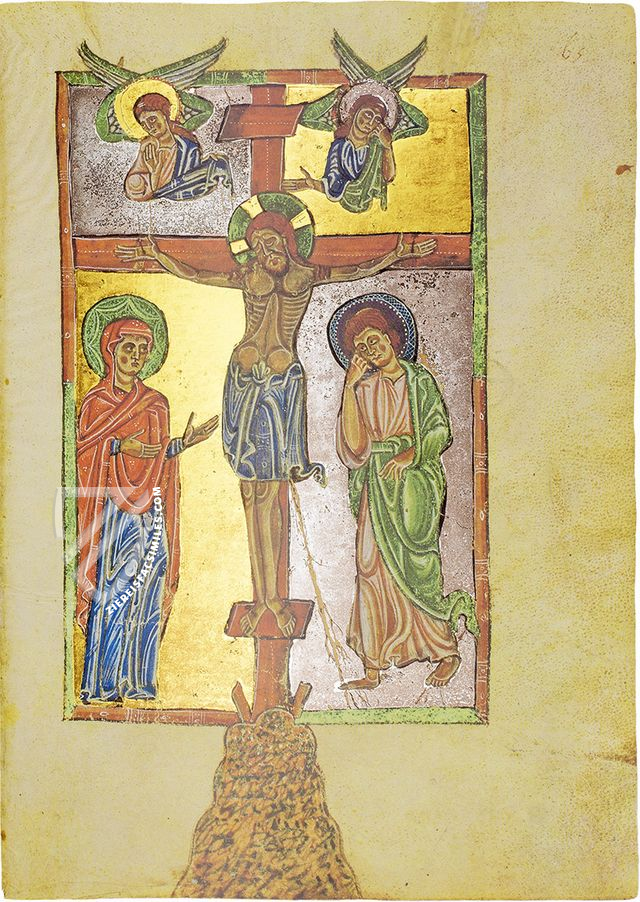 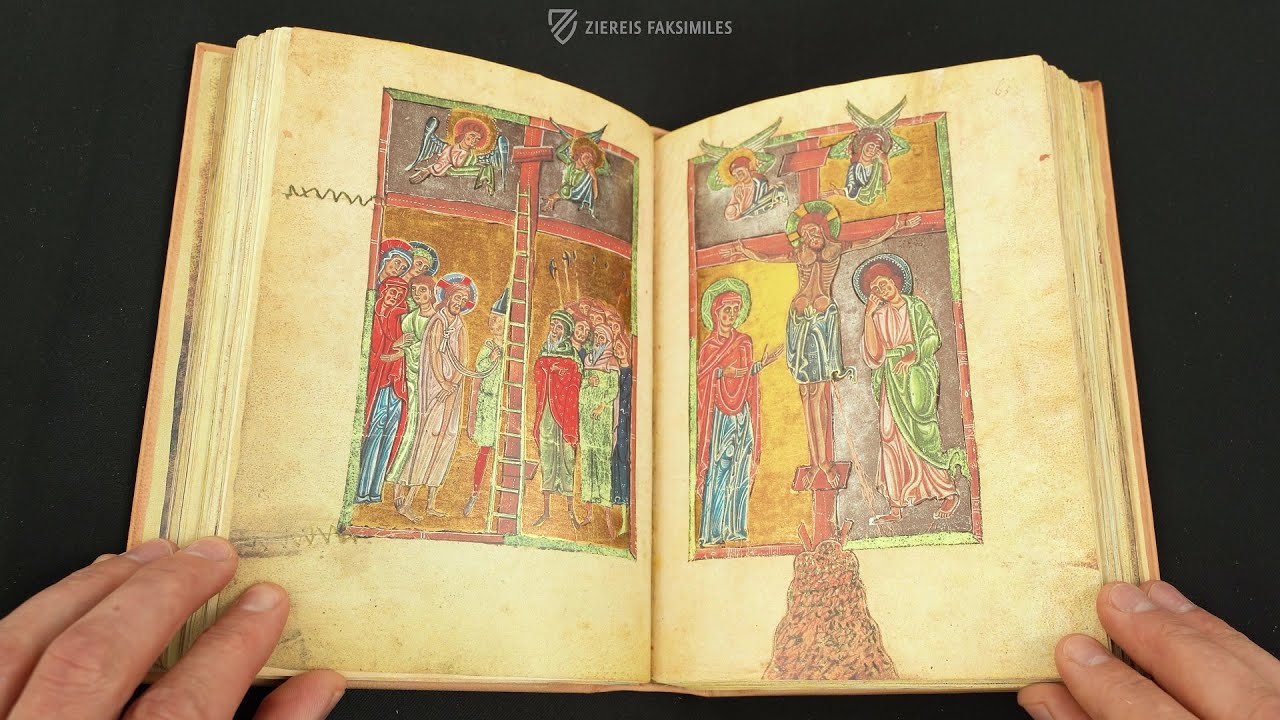 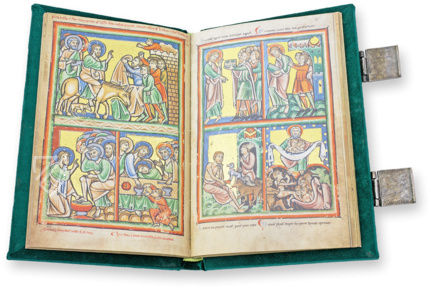 Miniatures in Byzantine style on polished gold backgrounds, but with explicit criticism of the Crusades: a 12th-century French illustrated Bible formerly in the possession of the Dutch king 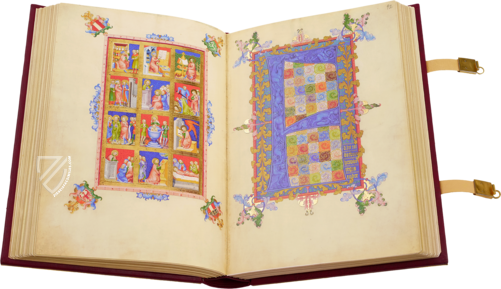 The "founding work" of the Austrian National Library, written entirely in gold ink, with its magnificent original binding: a Bohemian Codex Aureus with breathtaking historiated initials and miniatures