This wonderful Spanish manuscript of the Speculum Animae originated in the late 15th century as a work by Sister Isabel de Villena, who was from the highest social circles of the Kingdom of Castile. She was relatively obscure until recently, but is now highly regarded as a proto-feminist author alongside Christine de Pizan. The Mirror of the Soul contains religious meditations about biblical themes, whereby the focal point lies on the life of the Christ, which is traced from the Annunciation through the Passion. No less than 75 miniatures illustrate this content, including 53 full-page miniatures, which consist of delightful, subtle pen drawings, which are also painstakingly colored. The figures are dressed in contemporary clothing and headdresses, which gives the beholder a glimpse of fashion in late-15th century Spain.

An enigmatic image composition is found immediately on the first pages of the manuscript: four medallions with mysterious scenes are always arranged around a simple red cross in the middle. Thus, we find depictions of Christ before the kneeling faithful, three men united by a halo – the Holy Trinity? –, a skeleton standing in a green field, or a wondrous monster. However, the motifs of these round picture tablets also include a gentle river landscape, a compass, and an angel.

An Impressive Testimonial to Catalonian Faith

All of these depictions illustrate a religious devotional book with the Latin title of Speculum Animae, "Mirror of the Soul". Sister Isabel de Villena (ca. 1430–1490) is considered to be the scribe and artist responsible for this impressive Catalonian manuscript. She was the daughter of the famous Marqués de Villena, an important Castilian noble in the 15th century. She worked in the Real Monasterio de la Trinidad in Valencia, for which the Speculum Animae was made. The manuscript disappeared from there during the 18th century and finally reached the Spanish National Library in the 19th century.

Aside from the enigmatic medallions already mentioned, the 88-page manuscript is also decorated with 63 full-page miniatures. These illustrate spiritual meditation on the Passion of the Christ with delightful, subtle pen drawings, which are also painstakingly colored. Alongside a depiction of Adam and Eve in Paradise, one primarily finds detailed scenes from the Life of Christ, from the Annunciation and birth to the Passion. Elegant, elongated figures are reminiscent of Gothic design vocabulary, and the colorful clothing and headdresses allow us to draw conclusions about the fashion of the period. As a result, the manuscript of the Speculum Animae by Isabel de Villena is an all-around impressive testimonial to Catalonian illumination and faith in the late 15th century! 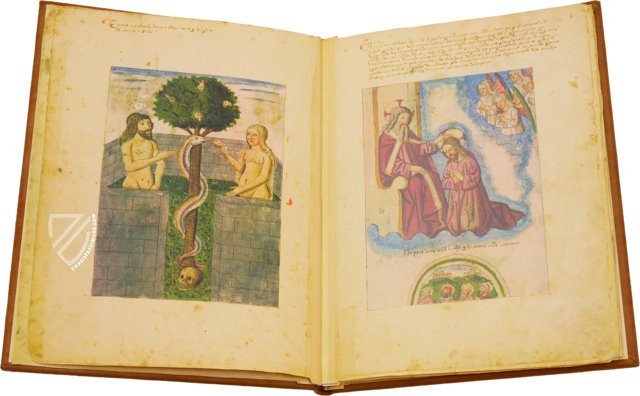 Tied to a pillar and looking up towards his heavenly father with an exasperated expression on his face, Christ is already covered in blood as his beating continues. Two of his tormentors grab at Christ’s long hair and pull his head back without disturbing his cross-halo while a third depicted in profile with a long nose and a Tartar beard prepares to strike. Aside from the skillful use of shading and color, this “snapshot” also realistically depicts the human body and its movements. 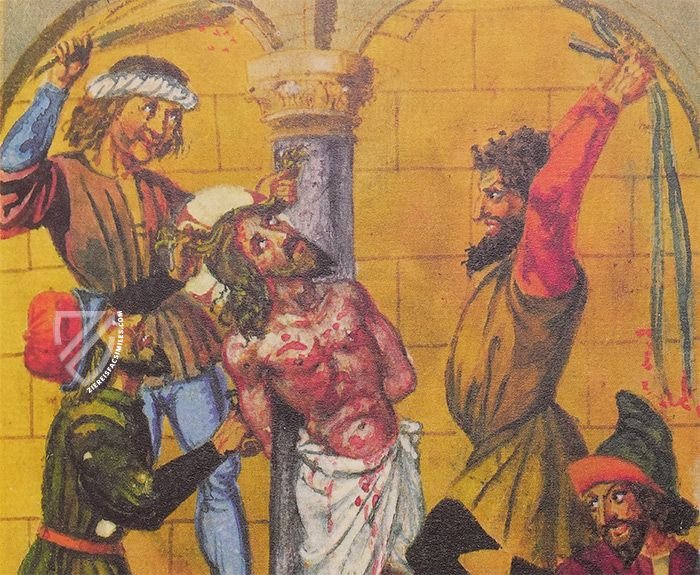 Adam and Eve in Paradise

Adam and Eve stand within the rectangular walls of the Garden of Eden, which also preserves their modesty because they have just eaten fruit from the Tree of Knowledge. The serpent winds itself around the tree, at the base of which a skull sits as an indication that death is now their fate.

Although appearing simple at first glance, this miniature is a testament to the skill of the artist who created it, Sister Isabell de Villena. The composition is perfectly balanced, the perspective is realistic, and the figures are naturalistically depicted. Adam gestures as though he is speaking to Eve, who stands holding the fruit with a serene look on her face, waist-length blonde hair, and wide, fertile hips – a nod to the pain of childbirth. 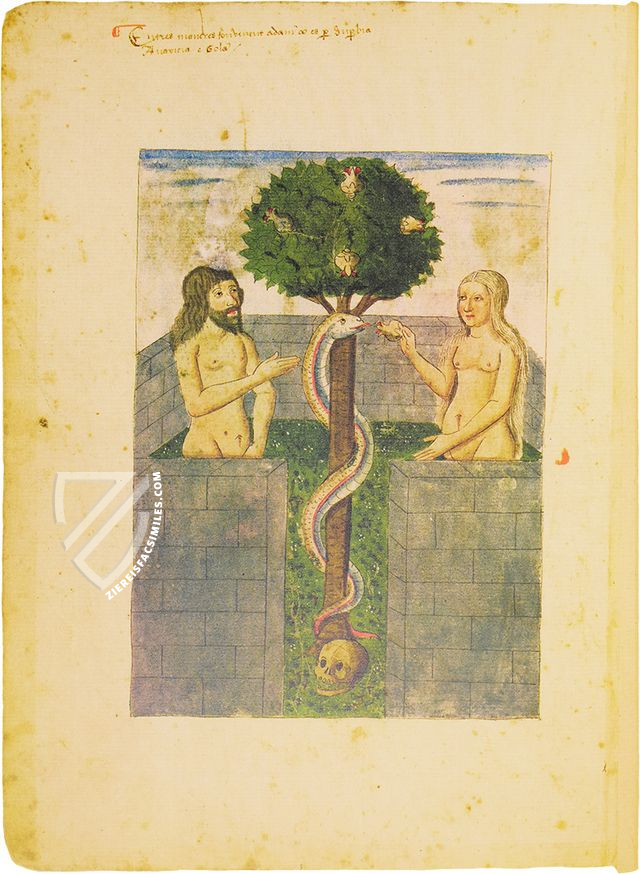 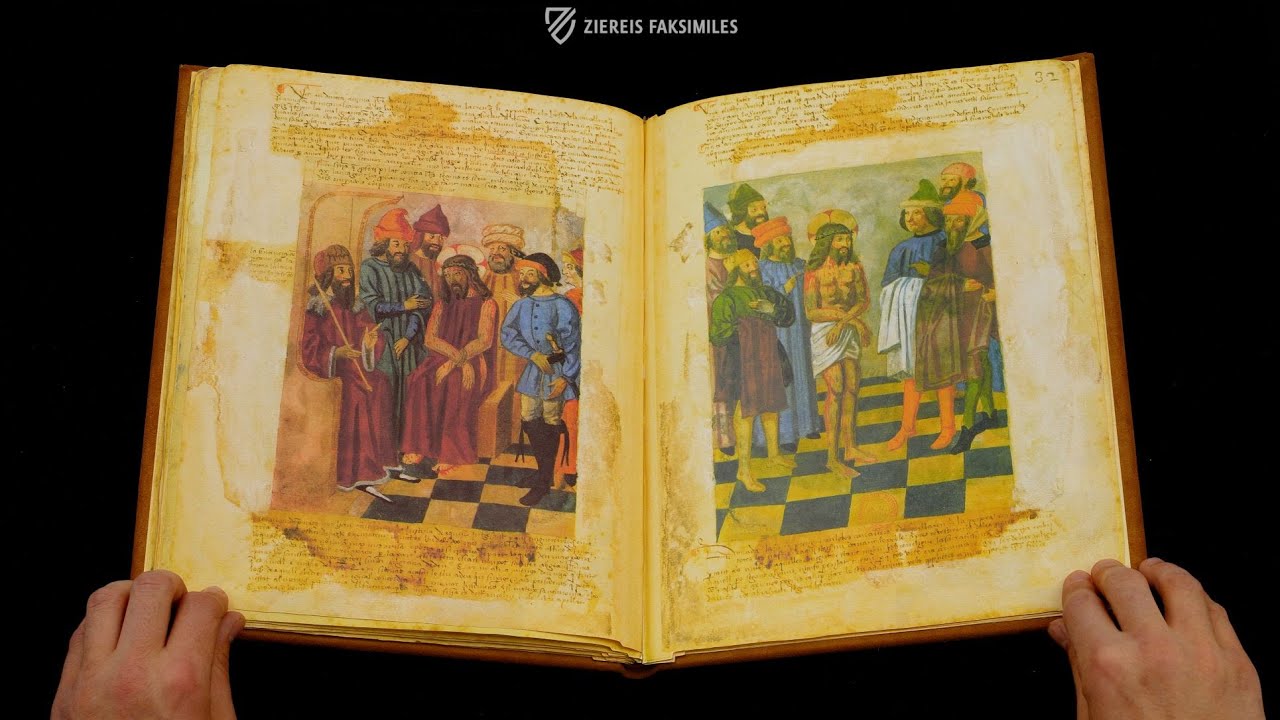 Publisher: Edilan – Madrid, 1992
Limited Edition: 1500 copies
Binding: Mudejar binding in leather
Commentary: 1 volume by Albert Guillem Hauf i Valls and Daniel Benito Goerlich
Language: Spanish
1 volume: Exact reproduction of the original document (extent, color and size) Reproduction of the entire original document as detailed as possible (scope, format, colors). The binding may not correspond to the original or current document binding.
Regular price without login (like new)1,290 €
Login for a Better Price!
Order / Ask a Question
You might also be interested in: 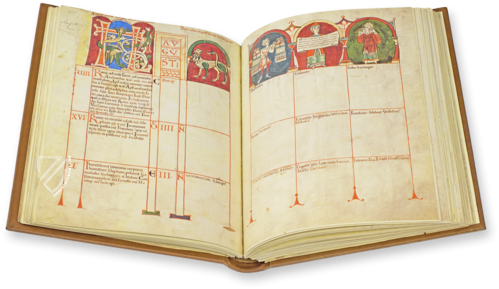