The Pageants of Richard Beauchamp, Earl of Warwick are so-called because they consist of a series of drawings representing scenes or “pageants” from the life of the English earl, military commander, and important political figure during the reigns of Henry IV, Henry V, and Henry VI during the final period of the Hundred Years' War. Likely compiled at the behest of his daughter Anne, this manuscript is the only illustrated biography of a secular figure to have survived from the Late Middle Ages. 55 uncolored but masterfully designed and shaded pen and ink drawings by a skilled artist known as the Caxton Master adorn the manuscript from ca. 1485. Accompanied by explanatory texts, they cover virtually every important event in the Earl’s life from his birth and baptism to his death and burial. These dramatic drawings are famous for their realism, detail, and the valuable insights they offer researchers into European warfare and court culture during the Late Middle Ages.

Richard Beauchamp (1382–1439) was the 13th Earl of Warwick and a close confidant of the English Royal Family, thus his biography is sometimes referred to as the “Warwick Roll” despite the fact that it is a codex. Its author is John Rous (ca. 1420–92) an Oxford-educated cleric and historian who was from a minor noble family in Warwickshire and would spend most of his career in service to the Yorkist Dynasty. The work was commissioned by Richard’s daughter Anne Beauchamp (1426-92) as an attempt to restore her family’s honor and possessions by highlighting their illustrious history. Anne had fallen out with her family after she married Richard Neville (1428–71), who switched from the Yorkist to the Lancastrian side during the Wars of the Roses and earned the epithet “Kingmaker” for his role in the deposition of two kings. As a result, Anne was disinherited by her family and never regained her inheritance, despite the magnificence of this manuscript, which was probably commissioned between 1483 and her death, at which time it remained unfinished.

The Unicum of Late Medieval Biography

In comparison to his Historia Regum Angliae, this biography is considered to be relatively reliable and free of embellishment because Rous was Beauchamp's chantry priest at the Collegiate Church of St Mary's, Warwick. His text is furnished with 55 pen and ink drawings that are highly valued both for their artistry as well as for their historical importance. While some have claimed that Rous himself illustrated the codex, it is now believed to be the work of the Caxton Master, thus named for his illustrations of William Caxton's translations of the Metamorphoses of Ovid and the Mirroure of the Worlde. We are truly lucky today that the only surviving illustrated biography of a secular figure to have survived from the Late Middle Ages is such a gem of book art.

The Foundations of Glory

To say that Richard Beauchamp was one of the most prominent men of the Kingdom of England during the first half of the 15th century would be an understatement. He was godson to King Richard II (1367–1400), was knighted at the coronation of King Henry IV (1367–1413) in 1399, and inherited the Earldom of Warwick, one of the most prestigious titles in the peerages of England, in 1401 when he was only 19 years old. He was soon called to serve the Crown by helping to put down a rebellion in Wales and was made a Knight of the Garter on the 22nd of July 1403, the day after the Battle of Shrewsbury. This laid the foundations for a military and political career that would put him at the center of events in his lifetime.

A Life of Service

Warwick was appointed a member of the royal council in 1410 and became one of the Crown’s most trusted soldiers and emissaries who both served in the Hundred Years’ War while representing England at the coronation of Sigismund of Luxembourg (1368–1437) as King of Germany. Warwick was entrusted with the education for the infant Henry VI (1421–71) and served him throughout his minority, even serving as superintendent of the trial of Joan of Arc in 1431. After the King came of age, Warwick remained in France and continued to vigorously serve the English Crown faithfully for the last two years of his life.

Warwick also had a reputation as a chivalrous knight who participated in knights’ tournaments and went on pilgrimage to the Holy Land in 1408. He even attempted to join the Teutonic Order after it was decimated at the Battle of Grunwald while on a tour of Russia and eastern Europe on his return trip to England. It is on these chivalric deeds and other grand or exciting events rather than his military victories that the text and the images place their focus. For example, one image shows him engaged in combat on foot with Sir Pandolf Malateste in the court of an Italian duke, sometimes identified as the Duke of Verona, sometimes as Galeas of Mantua. In the miniature, both men wield pole arms and the Bear and Ragged Staff, the heraldic badge of the Earldom of Warwick, is prominently displayed on the crest of his helm to identify Beauchamp.

The manuscript was likely passed down to one of Anne’s daughters before coming into the possession of Robert Glover (1544–88), an English Officer of Arms, genealogist and antiquarian whose interest in the unicum is self-evident. It then passed into the collection of Sir Robert Cotton (1570/1–1631), the famous antiquarian and founder of the Cotton Library. When his grandson Sir John Cotton (1621–1702) donated the entire collection to form one of the foundations of the British Museum in 1753, The Pageants of Richard Beauchamp, Earl of Warwick went with them before being transferred to its final repository in the British Library when it was established in 1973. 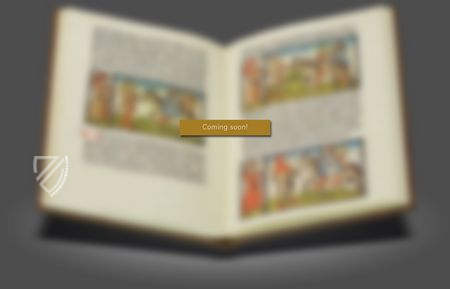 Begun in Flanders, completed in London, and now a treasure of the Bodleian Library in Oxford: luminous miniatures and fascinating pas-de-page paintings in a large-format compendium of the most popular tales of the Middle Ages