One of the most important works of the German Renaissance was printed in the year 1517 in Nuremberg: an epic poem by Emperor Maximilian I himself! In Theuerdank, the Kaiser addresses his journey to meet his new bride, Mary of Burgundy, which is embedded in an environment which is typical for that time – full of adventure and chivalrous virtues. The most important artists of the time, including Hans Burgkmair, Hans Schäufelein, and Leonhard Beck, contributed to the magnificent illustrations in the form of 118 colored woodcuts. The Augsburg printer Hans Schönesperger, Maximilian’s imperial book printer, produced the work with a specially designed typeface. It was first printed on vellum in a very limited publication for various German princes, dignitaries, and those close to Maximilian.

A medieval chivalric epic meets the modern technology of the printing press: Teuerdank is considered to be one of the great treasures of early printing and is furnished with masterful woodcuts from some of the most renowned artists of the period. The work was apparently authored by Holy Roman Emperor Maximilian I (1459–1519) and was initially published in 1517 as a luxurious limited print with colored and gilded woodcuts that used vellum instead of paper that was a personal gift from Maximilian. It is a perfect representation of the character of a man who simultaneously bears the epithet “the last knight” but is also considered to be the father of the Landsknechte, “the first cannoneer of the nation” and a modernizer of both warfare and statecraft. For the first time, a full-color vellum facsimile of the magnificent original print has been made available for those of us who do not count among the close circle of Emperor Maximilian.

The tale of the knight Theuerdank’s journey to rescue his beloved was used as a fictionalized and romanticized retelling of young Maximilian’s own 1477 journey to marry Duchess Mary of Burgundy (1457–82). Despite the fact that he began military reforms that would transform warfare over the next two centuries, Maximilian lived – and fought – as a knight. Not only did he excel in tournaments but challenged and killed French knights on at least two occasions in duels before battles. He had a great passion for armor and had both practical armor for combat as well as highly decorative armor for tournaments. There was even a popular and influential style known as “Maximilian armor”. Despite being the greatest warlord of his generation with the sobriquet Coeur d’acier or “Heart of steel”, he received an excellent humanist education and was a patron of the arts and sciences, humanist literature in the particular. Maximilian painted, played instruments, wrote poetry and literature, but also had practical training in farming, carpentry and blacksmithing. He was in many ways the epitome of a Renaissance prince, Machiavellian scrupulousness and all.

Throughout his journey Teuerdank encounters no less than eighty different life-threatening adventures, which are engineered by Erenreich’s most powerful vassals – Fürwittig, Neidelhart and Unfallo – whose power is threatened by Teuerdank; they therefore try to kill him, thereby preventing the marriage. Thus, Teuerdank encounters dangerous hunting expeditions in which he is given unsafe weapons; he is led into the path of organized ‘accidents’ such as broken staircases, rockslides and avalanches; he is given poisoned food to eat; he sets sail in stormy seas and his ship is set on fire; mercenaries are paid to engage him in jousts. Ultimately, of course, our hero overcomes these perils by his bravery, foresight, skill and knowledge. The treachery of his three adversaries is revealed and they are executed. The book ends as Mary promises to marry Teuerdank on the provision that he first furthers his honor by undertaking a crusade against the Turks.

This work is considered by many to be the last revival of medieval chivalric ideals and was created at a time when both the battlefield dominance and political influence of knights were long past their peak. It was also a time when printed books were overtaking illuminated manuscripts but were still meticulously created by hand. This is especially true of the 118 woodcuts, which are colored and illuminated with gold. Most of them originate from the hands of three leading artists of the period: Leonhard Beck (ca. 1480–1542), Hans Burgkmair the Elder (1473–1531), and Hans Schäufelein (ca. 1480 – ca. 1540). Although ostensibly written by Emperor Maximilian, his personal chaplain Melchior Pfintzing (1481–1535) certainly played a role in creating the text between 1505 and 1512. It would take another five years for Hans Schönsperger the Elder (1444–1521), who had been appointed Maximilian’s printer for life in 1508, to create this historic printed work. The text is printed in “Theuerdank Fraktur”, the oldest form of Fraktur script, and first appeared in 1512/13. #1 The Theuerdank of 1517: a Cultural-Historical Introduction
Taschen – Cologne, 2003
Facsimile Editions

#1 The Theuerdank of 1517: a Cultural-Historical Introduction

Taschen – Cologne, 2003
Publisher: Taschen – Cologne, 2003
Commentary: 1 volume by Stephan Füssel
Language: English
1 volume: Exact reproduction of the original document (extent, color and size) Reproduction of the entire original document as detailed as possible (scope, format, colors). The binding may not correspond to the original or current document binding.
Price Category: € (under 1,000€)
Edition available
Price: Log in here!
Order / Ask a Question
You might also be interested in: 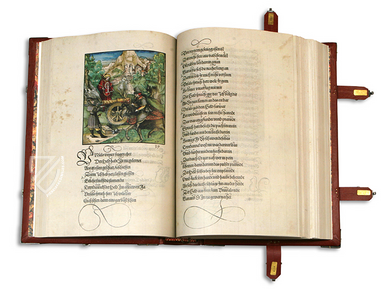