The amazing tales of the knight Teuerdank (also spelled Theuerdank) and his companion, Ehrenhold, comprise the last great verse epic of the Late Middle Ages. Teuerdank is the alter ego of Emperor Maximilian when was still a young man. The courageous knight's journey to woo his future wife, Mary of Burgundy, and his triumph in battles and other dangerous situations are the focus of this highly embellished “real-life” story of Emperor Maximilian I (1459–1519). Elected Holy Roman Emperor in 1508, Maximilian was a great patron of the arts and commissioned a trilogy of ornate, illustrated books to immortalize his existence.

Theuerdank, the only volume to be published during the Emperor’s lifetime, was composed by Melchior Pfinzing based on Maximilian's rather fanciful draft. The 118 ornate, gold-adorned woodcuts – one for each chapter – were made by Hans Burgkmair the Elder, Hans Schäufelein, and Leonhard Beck, while the typeface – known as the “Theuerdank typeface” and characterized by its striking “elephant trunks” – was specially designed for the book by the printing workshop of Hans Schönsperger the Elder. Produced in 1517 in Nuremberg, this triumph of book design has been described as one of the greatest books of the German Renaissance.

Maximilian I (1459–1519) – Archduke of Austria, King of Germany German, and Holy Roman Emperor (1493–1519) – was an important patron of the arts in the 16th century. We can safely say that he was one of the first Humanist emperors of the Renaissance, enthusiastic about new scientific inventions as well as the arts. He made his court a major center for the arts. Maximilian supported music, planned grand architectural monuments, collected an important library and encouraged printing. He was also highly interested by his family history, commissioning genealogical studies to provide him with eminent ancestors including Caesar, Charlemagne and King Arthur. Maximilian was himself a prolific author. Teuerdank is traditionally ascribed to him, however it should more correctly be attributed to Melchior Pfintzing, his chaplain, who worked extensively on the text in accordance with the Emperor’s instructions. Some commentators also credit Maximilian’s secretary, Marx Treitzsauerwein, with some responsibility for the writing. Certainly, the whole concept took a long time to complete: originally planned in 1505, the poem did not near completion until 1512, and took a further five years to be produced.

The story is a long allegorical courtly poem written in rhymed couplets, a fictionalized account of the adventures of Maximilian. In 1477, he travels to the Netherlands to claim his bride, Mary of Burgundy, and her kingdom. The Emperor is portrayed as the chivalric knight Teuerdank (roughly translated as “noble thought”) accompanied by his trusty companion Erenhold. The story begins when Romreich (Charles of Burgundy), the father of Erenreich (Mary) dies. Throughout his journey Teuerdank encounters no less than eighty different life threatening adventures, which are engineered by Erenreich’s most powerful vassals – Fürwittig, Neidelhart and Unfallo – whose power is threatened by Teuerdank; they therefore try to kill him, thereby preventing the marriage. Thus, Teuerdank encounters dangerous hunting expeditions in which he is given unsafe weapons; he is led into the path of organized ‘accidents’ such as broken staircases, rockslides and avalanches; he is given poisoned food to eat; he sets sail in stormy seas and his ship is set on fire; mercenaries are paid to engage him in jousts. Ultimately, of course, our hero overcomes these perils by his bravery, foresight, skill and knowledge. The treachery of his three adversaries is revealed and they are executed. The book ends as Mary promises to marry Teuerdank on the provision that he first furthers his honor by undertaking a crusade against the Turks.

Maximilian as an Author

One of three autobiographical texts planned by Maximilian, Teuerdank was the only work finished in his lifetime. The Weisskunig (‘White King’) was to have been the first instalment, celebrating his childhood and youthful exploits. Although 237 illustrations were created for this, it was not published until 1775, and then only in a fragmentary version. The last part, the Freydal, was even less complete when Maximilian died in 1519. Teuerdank, meanwhile, enjoyed considerable success. While the first edition of 1517 was intended for private distribution, an edition for general sale appeared two years later and subsequent editions were produced regularly throughout the 16th century. Contemporary enthusiasm for it has been attributed partly to Maximilian’s popularity and partly to its striking illustrations and fine design. As a work of literature, it is disparaged by the Oxford Companion to German Literature for having wooden verse and repetitive construction.

The full title of the work translates as The Adventures and a Portion of the Story of the Praiseworthy, Valiant, and Highly-Renowned Hero and Knight, Lord Tewrdannckh. Originally printed on vellum, the book was made with a special, ornamental type characterized by enormous flourishes. At first glance, it is often mistaken for manuscript. This black-letter typeface was based on a gothic script used in the Imperial Chancery; it was first used in 1513 in the Prayer Book of Maximilian I and evolved into the font known as Fraktur. Considering that the book was produced only some sixty years after the introduction of printing by moveable type, its fine execution is all the more remarkable. It was printed by Hans Schönsperger the Elder, who had been appointed Maximilian’s printer for life in 1508. The result of his work was a major achievement, although by no means perfect: mistakes in the original typesetting have been carefully corrected throughout by means of pasted lines of text. 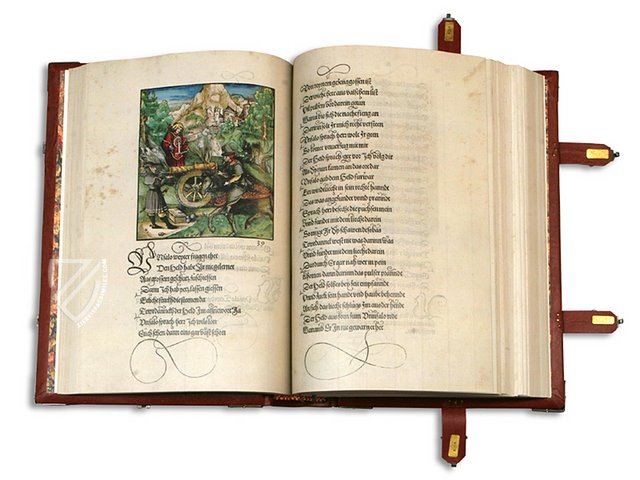