The Chirurgia by Abu´l Qasim Halaf ibn Abbas al-Zahraui is the oldest and also most important link between Greek classical and late classical medicine and the European medicine of the high Middle Ages. In it, the personal physician to Caliph al-Hakam II (961–976) combines the medical knowledge of antiquity with the physician´s own experience from decades of medical practice. The text was translated from Arabic into Latin by Gerard of Cremona (1114–1187), at which point Latin Europe was given the opportunity of access to a text which combined European medical knowledge in the field of surgery with highly specialized Greek and Arab findings.

The textbook of surgery written by the Arab physician Abu al-Qasim Khalaf Ibn Abbas az-Zahrawi stood for nearly 500 years as the leading handbook in this field of medicine. It constitutes the oldest and also most important link between Greek classical and late classical medicine and the European medicine of the high Middle Ages. Over long stretches of the Middle Ages, the Occident had lost the medical knowledge of Greco-Roman classical teachings. The Arabs, who preserved the classical ideas in the domains of poetry, philosophy, and science, brought this knowledge back to the western world, especially in the field of surgery where Arab medicine had made great progress. The most famous representative in this field was Abu al-Qasim, court physician of the Western Umayyad Caliph al-Hakam II (961–976) and author of writings which later became widely known. The Latin translation of this Arabic textbook on surgery was richly illustrated and lavishly decorated, thus underlining the estimation of the western world for what was then this most sensational of texts. In all, 68 miniatures form the artistic furnishings of this bibliophile manuscript, illustrating individual methods of medical treatment and instruments in all their details. Besides these miniatures, which might have been derived from Arab models, numerous 227 gilded initials altogether bear testimony to the flawless quality and great significance of the manuscript, both in medical history and in the history of art.

Abu al-Qasim is thought to have been born around the 930's or 940's near Cordoba (in al-Zahra precisely). The Arabic scholar thus stemmed from the Western Umayyad Caliphate which reached its climax during the 10th century. As the personal physician to Caliph al-Hakam II, he had the opportunity to enlarge his reputation as a physician, far beyond the scope of his own work. His writings were widely acknowledged and preferred even to the teachings of the Greek medical authority Galen.

The Contents of the Book

Chirurgia is the last chapter of a huge, comprehensive work Kitab al Tasrif liman ajizaan-al-ta´alif comprising the reception of Greek medical knowledge on the one hand and the physician´s own experience from decades of medical practice on the other. Out of 30 chapters of Abu al-Qasim´s lifework, which treats all domains of medicine in an encyclopedic form, only Chirurgia and three more sections were translated into Latin, leaving this huge œuvre widely undisclosed to the western world. Chirurgia, however, went down in high medieval medical history as the most important work in this field. Chirurgia is composed of three books and decorated with numerous miniatures to illustrate diverse methods of treatment. In the first book, which deals with cauterization, 40 miniatures show the application of the glowing iron to different parts of the body. The second book explains incisions, midwifery, bloodletting, the healing of wounds, and the application of leeches and cuppers, all illustrated in 27 miniatures, one of which shows the treatment of hydrocephalus (fol. 17r). The third book on the rejoining of bones and treatment of fractures and dislocated limbs contains the well-known and often reproduced miniature of the rack (fol. 76v).

Abu al-Qasim´s Chirurgia was translated from Arabic into Latin by Gerard of Cremona (1114–1187), one of the foremost members of the famous school of translators of Toledo, where numerous Greek writings were transliterated into Latin from Arabic sources. It was through the translation of Chirurgia that Latin Europe was given the opportunity of access to a text which combined European medical knowledge in the field of surgery with highly specialized Greek and Arab findings. A treasure throve not least for Latin philology in the Middle Ages, the Latin version of Chirurgia gave the western world an insight into new and revolutionary methods, thus constituting a truly epoch-making work of medicine. 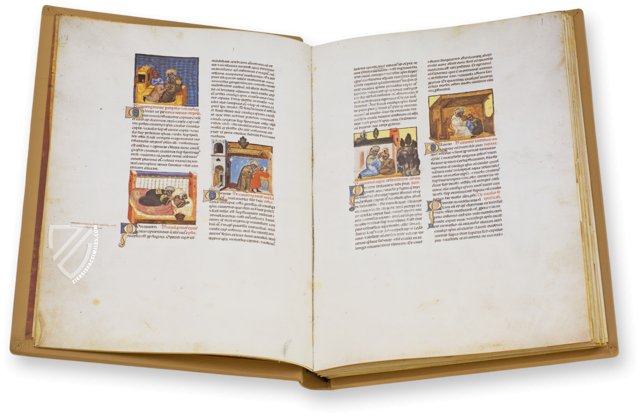 Accompanied by an elegant “Q” initial, this Gothic Italian miniature accompanying a text on the lancing of boils is based on an Arabic model. The procedure is about to be performed with the bald, naked patient looking away calmly as he crouches on all fours. Protruding from under the elegant folds of his robe, the doctor’s feet appear to hang out from the frame as though he were about to hop down from the page. Both the bedding and the doctor’s turban are elegantly patterned with gold leaf. 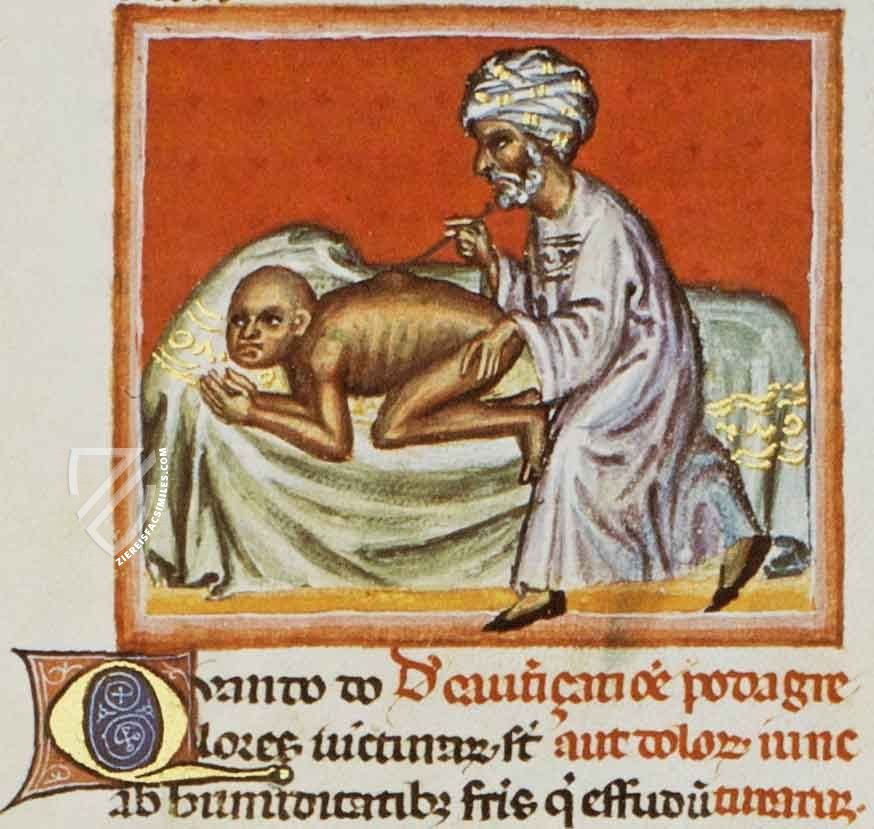 The first book of Al-Zahrawi’s influential text on surgery deals with cauterization, which was the Moorish physician’s specialty. The so-called glowing iron is depicted using gold leaf, a nod to his admiration of the technique and its ability to check infection.

Here we see two miniatures imbedded in the text. In both images, the doctor’s status is literally highlighted with gold. On the left, a head wound is being cauterized before an architectural background with a sky of burnished gold. To the right, the patient lies in a lavish bed and has a wound to his chest cauterized while two small figures hold up a curtain behind them – for privacy perhaps? 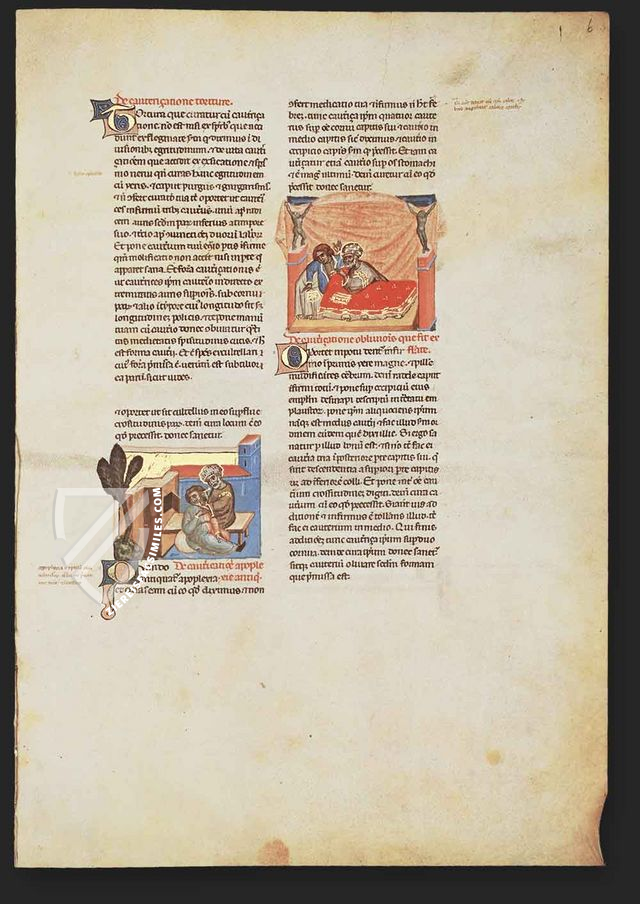 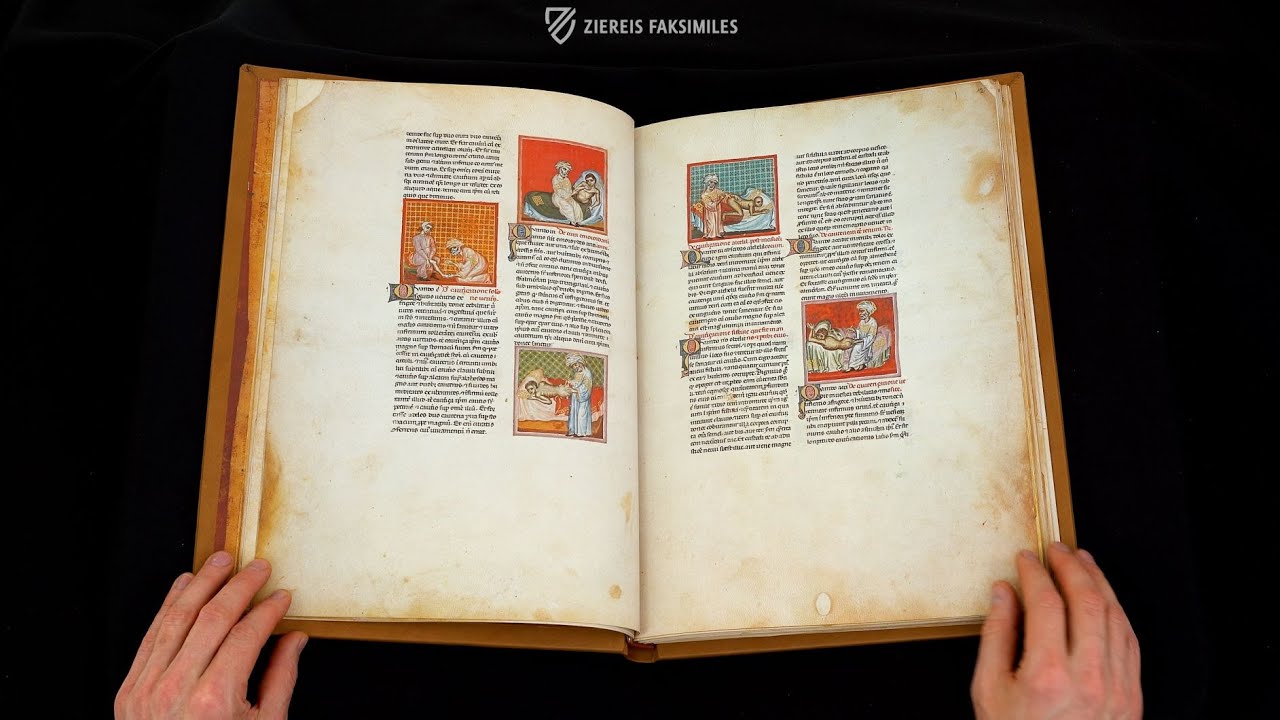 The comprehensive scholarly commentary was written by Eva Irblich and comprises an introduction on the author and the translator of the manuscript as well as a description of the codicology and contents of the codex. The commentary volume is complete with a bibliography and an index on the contents of the manuscript.
1 volume: Exact reproduction of the original document (extent, color and size) All folios are cut according to the original.
Price Category: € (under 1,000€)
Edition available
Please ask for a quote!
Order / Ask a Question
You might also be interested in: 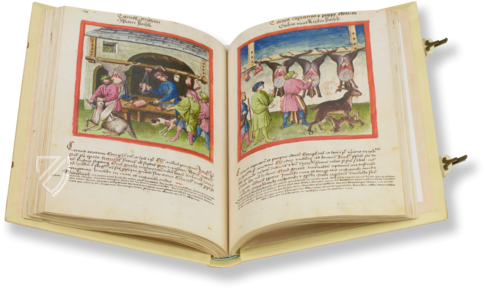 Originating from the Rhineland: the work of the famous doctor Ibn Butlan with beautiful miniatures on each page in Latin and German