The Bible of Frederico de Montefeltro was made in Italy between 1476 and 1478. Francesco di Antonio de Chierico, one of the most famous Italian Renaissance artists, designed the valuable manuscript in a superb collaboration with the scribe Ugo Comminelli da Mézières. The 35 large-format miniatures of the work are reminiscent of great Italian Renaissance painting in their quality. These miniatures are counted among the most precious works of Renaissance illumination and are a grandiose exhibition of the Florentine style. This incredible manuscript once represented the most prized possession in the incredible personal library of the famous general, prince, and patron of the arts Federico da Montefeltro.

The Italian Renaissance was an epoch in the history of art and culture, in which new standards were set. The painting and illumination of Italian Renaissance artists remains unsurpassed up to our own times. A particularly outstanding monument of illumination during the Renaissance is the Bible of Frederico da Montefeltro. The work, comprising over 1,000 pages in a large format of nearly 60 x 45 cm, is adorned with 35 full page miniatures and numerous additional embellishments of incomparable quality. It is a codex that belongs among the highest achievements of visual- and book art of the medieval world.

Montefeltro, Patron of the Arts

Federico da Montefeltro (1422–82) was a famous Italian Renaissance prince and the Duke of Urbino. The ruler, who was active as an extremely successful mercenary before the beginning of his rule, was an enthusiastic art collector and book lover. According to written traditions, he began his collections of valuable books and writings around the middle of the 1450’s. No acquisition was too expensive for him, no luxury too great. The Duke’s Bible was the crown jewel of his sophisticated book collection

The outstanding Bible was written by Ugo Comminelli da Mézières and was furnished with breathtaking, refined illustrations in only two years by Francesco di Antonio de Chierico in Florence. Both of the masters were employed at the court of the Medici family and were counted among the most talented Italian artists. The Renaissance prince and world-renowned art lover Lorenzo de Medici himself made his gifted court painter available to Montefeltro as a loan, so to speak. Working alongside Francesco thereon were such famous names in the history of illumination as Attavante degli Attavanti, Francesco Rosselli, and probably also Davide Ghirlandaio, the brother of the popular artists Domenico.

The illuminated Bible not only impresses through its astounding size and its comprehensiveness. The 35 large-format miniatures, with which the manuscript is illustrated, count among the most valuable illumination of the Renaissance. Each picture can be considered as an independent painting. The miniatures retain the rich and pompous style of Florentine art. The pictures indicate the distinct influences of the most important representatives of the Tuscan Renaissance. Hardly any other codex from this time boasts a similarly overwhelming picture cycle. The valuable original edition of the work is found today in the Biblioteca de Apostolica in the Vatican. 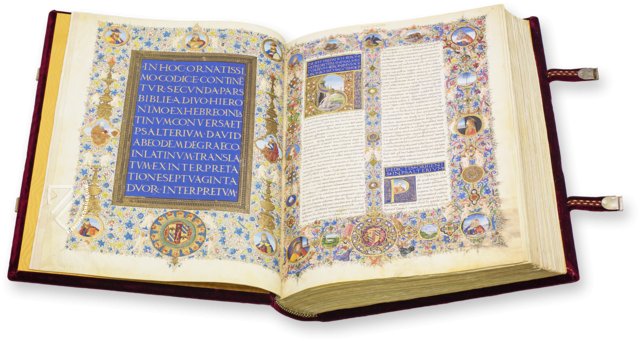 The caption for this miniature reads “after the death of Joshua”, the opening lines of the Book of Judges. At this point in the biblical narrative, the Israelites have come into the promised land, but are surrounded by enemies. One of their initial conquests is presented here in the style of a late medieval cavalry battle in full-plate armor. “Then Judah went up, and the Lord delivered the Canaanites and the Perizzites into their hand; and they killed ten thousand men at Bezek.” (Jdg. 1:4) 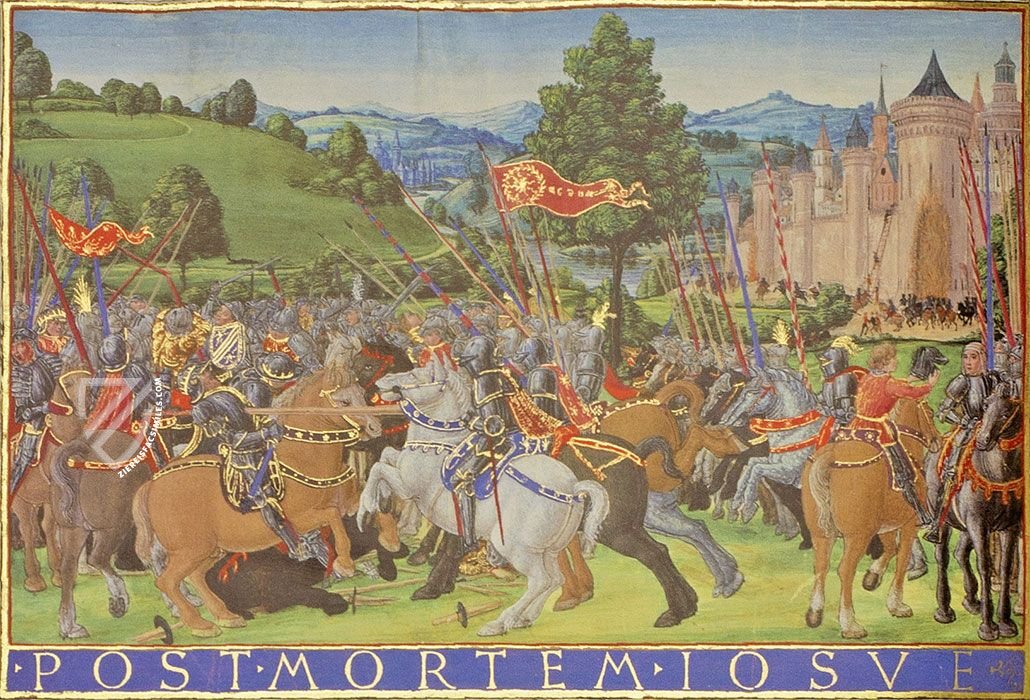 Before one even gets a glimpse of the miniatures in this masterpiece of the Italian Renaissance, they are greeted by this magnificent incipit – a highly decorated page with the first few words of the text to follow. These lines were used to refer to a text before the development of titles. Written in gold ink against a splendid blue background, they were surrounded by a frame within a frame, which are also gold.

The solid gold interior frame is painted so as to look textured and as though it is secured with nails – it appears almost three-dimensional. The outer frame is a masterful combination of escutcheons and portraits in medallion miniatures amid cherubs, gold furnishings, including elaborate burning lamps. This is just a taste of the artistic buffet to come! 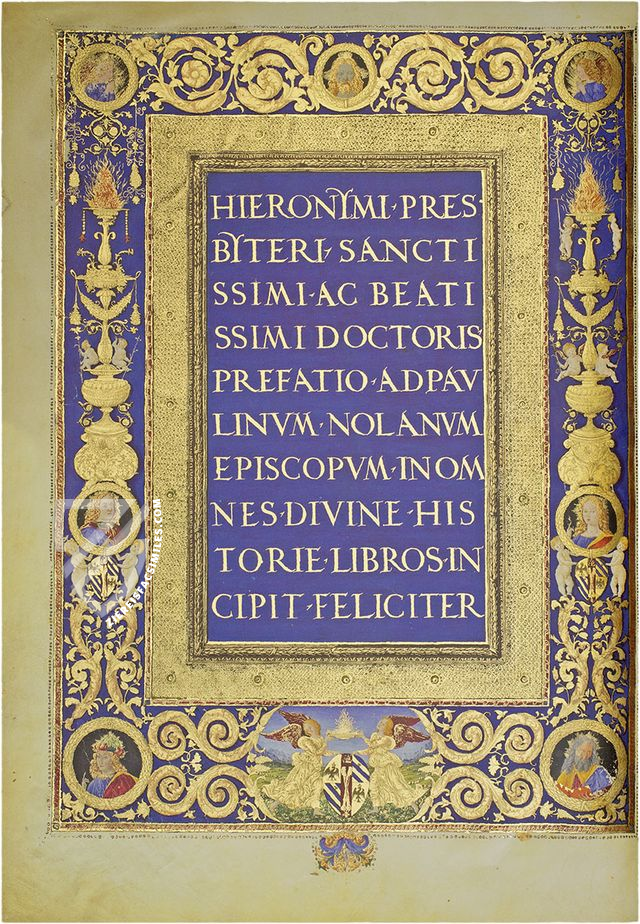 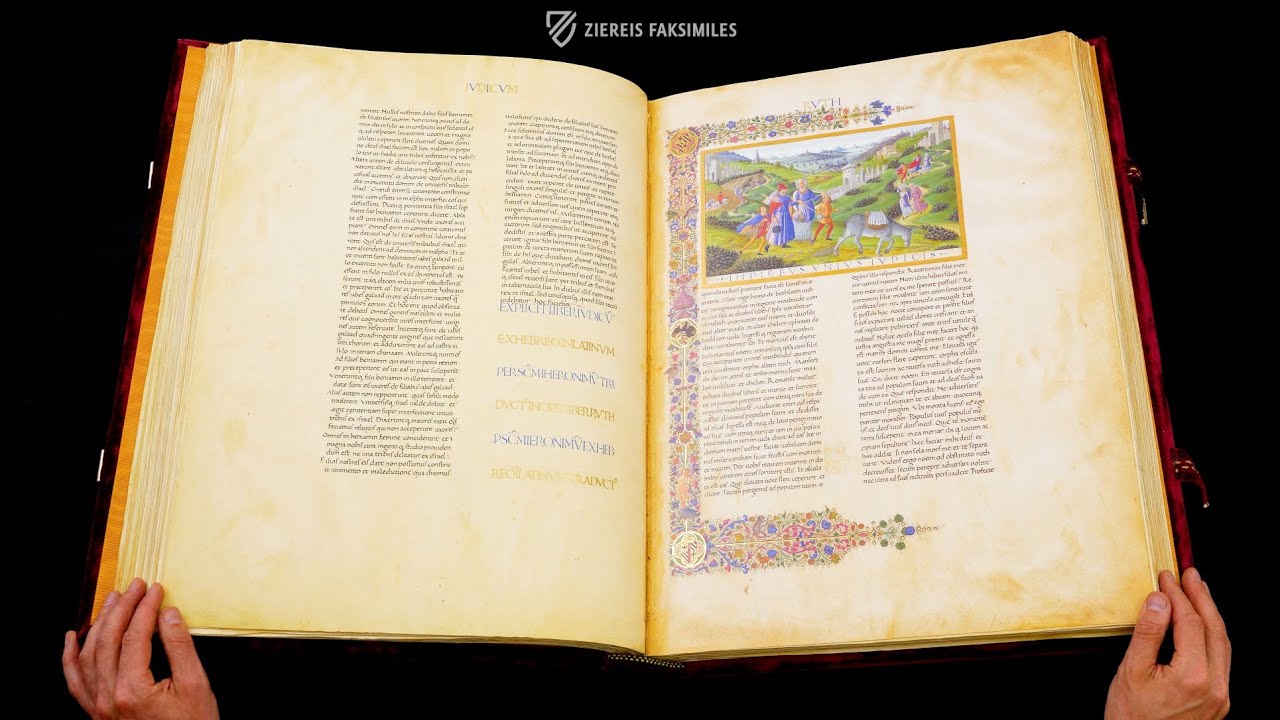 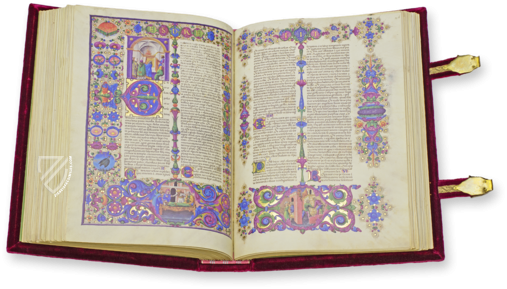 Each of its 1,200 pages is masterfully illuminated with incredible attention to detail: the grandiose climax of the Renaissance for Borso d'Este, one of its most dazzling princes 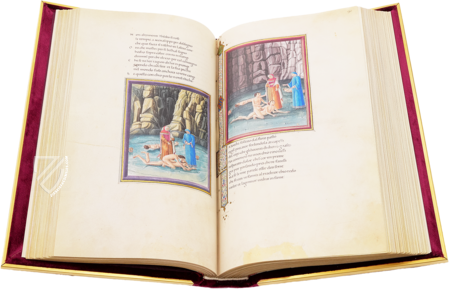 An opulent treasure from the rich library of Federico da Montefeltro: one of the finest illuminated editions of Dante's Divine Comedy for the influential Renaissance prince and important patron of the arts 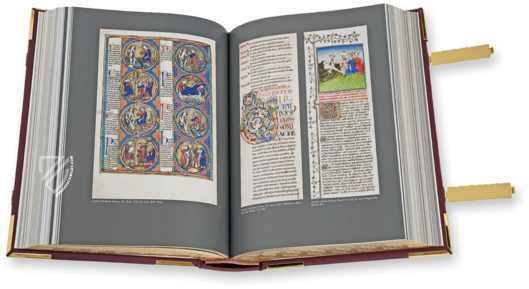 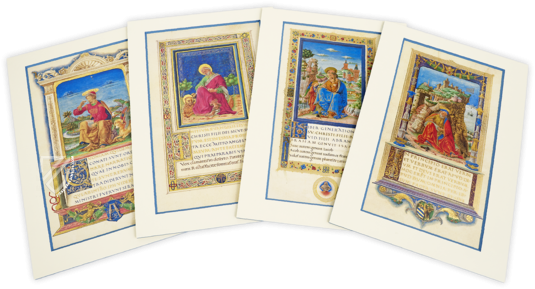 The Four Evangelists
Ferrara (Italy) – Around 1474

From mercenary to generous patron of the arts: the perfectly executed Renaissance portraits of the Four Evangelists for the Duke of Urbino, the condottiero Federico da Montefeltro