Holy Roman Emperor Charles V (1500–58) was one of the greatest art patrons in history. This is one of the various manuscript masterpieces owned by the powerful monarch, and was made in France, probably Rouen. It is notable for its elaborate cycle of illumination, which is of the highest quality. Mystery surrounds the origins of the coveted manuscript, and it has changed hands many times over the centuries and found itself in the possession of wealthy aristocrats and bibliophiles on both sides of the Atlantic.

Holy Roman Emperor Charles V (1500–58), aside from being the most powerful European monarch since the reign of the Emperor Charlemagne (742–814), was also one of the greatest art patrons in history. Here we have one of his magnificent books of hours, made for the Emperor in France, probably in Rouen and possibly in Paris, and was written in Gothic script by a single scribe. It is notable for its elaborate cycle of illumination, which is of the highest quality. Nonetheless, the origins and ownership history of the manuscript are contested: although modern art historians date the work to the early 16th century, an 18th century note in the codex claims that it was made in the 14th century, and belonged to various members of the French royal family and aristocracy. Regardless of its origins, the magnificent book of hours has been highly coveted throughout the centuries, boasting refined illumination of the highest order.

Illumination Worthy of an Emperor

As was typical in a books of hours, it begins with a calendar in French with alternating red and blue entries, typical labors of the month, and signs of the zodiac. This is followed by sequences of the Gospels, the Hours of the Virgin (use of Rome), the Penitential Psalms, the Office of the Dead (use of Rome), Short Hours of the Cross, and the Short Hours of the Holy Spirit. The large miniatures facing text pages and Calendar pages are set in architectural frames with gold, red, and blue panels; the frames of the miniatures are inscribed with the opening words of the text along the lower edge. A few small miniatures are inserted in the text. The series of 12 Sibyls are accompanied by texts on scrolls in the lower border, most of which correspond to the set used in the painted decoration of the Roman palace of Cardinal Giordano Orsini. On the page facing each Sibyl, or on the same page, one finds border scenes from the Life of Christ, to which the prophecies are supposed to refer, and appropriate biblical passages on a scroll in the lower border, which are referred to in brackets following the identification of the scene above them. Small landscapes with battling grotesques and animals in red and gold frames, or acanthus surrounding scrolls, pink and gold, some with prophecies and others with texts relating to the figures above appear in many of the bas de page miniatures.

An 18th-century note on f. iii verso states that it was produced in the 14th century, although it has been assigned to the early 16th century by modern art historians. Furthermore, the note claims that it belonged to Charles d'Orléans (1459–96), Count of Angouleme, who gave it to his wife Louise de Savoie (1476–1531), upon whose death it passed to Marguerite de Valois (1553–1615), Queen of Navarre. The manuscript is hence sometimes called the Hours of Marguerite de Valois or Marguerite de Valois' Prayer Book although there is no evidence to support ownership by anyone on the 18th-century list except by Jean Baptiste Denis Guyon de Sardiere (1674–1759). His collection was catalogued for sale in Paris, 1759, but was acquired en bloc by Louis Cesar de la Baume le Blanc, Duc de la Valliere (1708–80). This part of the Duke's library was acquired by Jean-Benjamin de la Borde (1734–94), valet-de-chambre to King Louis XV (1710–74). According to a note on second flyleaf at end manuscript, it underwent a restoration in 1846 by a certain A. Gobert. Finally, it was purchased in 1969 for Yale University’s Beinecke Library, where it remains to this day. The work was rebound with sumptuous dark velvet in 1984–85 by J. Greenfield of the Yale Conservation Studio. 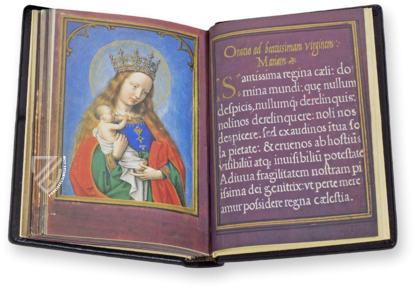 With one of only three completely preserved picture cycles from the hand of the famous Simon Bening: an innovative and individually illuminated prayerbook representing one of the last true masterpieces of illumination 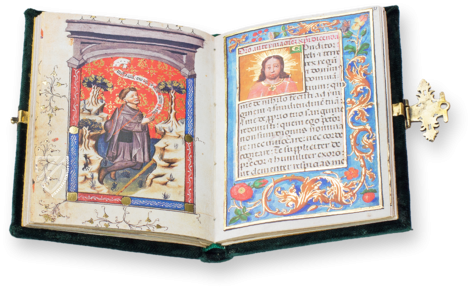 First compiled in the 19th century: a magnificent assortment of the most beautiful Gothic and Renaissance paintings by Flemish and Spanish artists of the 15th and 16th centuries