The so-called Book of Hours of Margaret of Austria and Alessandro de' Medici, originated in Florence in the 1530’s and presents itself as a last highpoint of Italian Renaissance illumination. The manuscript was probably a gift from Alessandro de’ Medici to his wife, Margaret of Parma. The splendidly artistic design is a sign of the grandiose art of Francesco Boccardi.

Alessandro de’ Medici (1510–1537), named Il Moro, was one of the most controversial Florentine rulers from the House of Medici. Named Duke of Florence by the Holy Roman Emperor in 1532, Alessandro was murdered by a cousin just five years later. Shortly before that in 1536, he married the illegitimate daughter of Emperor Charles V, Margaret of Parma. The precious book of hours, which is stored today in the Biblioteca dell'Accademia Nazionale dei Lincei e Corsiniana in Rome as the Book of Hours of Margaret of Austria and Alessandro de' Medici, was also probably in the possession of his wife.

Margaret of Austria (1522–1586), also known as Margaret of Parma, was only married to the sovereign of Florence for a short time. After Alessandro’s shocking death, the illegitimate daughter of Emperor Charles V was already married a year later to Ottavio Farnese and also exercised political influence under her brother Philip II as governor of the Habsburg Netherlands.

A Gem from the Workshop of Boccardi

The luxurious manuscript originated at the behest of Alessandro de’ Medici. A post–1532 date of origin is confirmed by a detail in its décor: the portrait of Alessandro in the manuscript identifies him as “dux” and therefore must have been created after he was named Duke of Florence in 1532. The impressive visual adornment came from the hand of Francesco Boccardi. He was active between 1509 and 1547 and was the son of Giovanni Boccardi, a famous miniaturist known as Boccardino in Florence under Lorenzo the Magnificent ca. 1500.

A Highpoint of Florentine Illumination

Francesco Boccardi furnished the book of hours with a few full- and even double-page miniatures with a clear connection to the content, which are furthermore designed in an extremely innovative way. Numerous smaller miniatures and countless splendid initials further this impressive pictorial decoration. Lavishly-designed bordures and trim are filled with illusionistic flowers, fruits, small animals like butterflies and birds, gemstones, heraldic motifs with a few small depictions of rulers found among them, and the heraldic badge of the Medici appears again and again. As one of the last books of hours of the Florentine Renaissance to be so splendidly designed overall, the manuscript is wonderfully rounded out with shimmering gold. 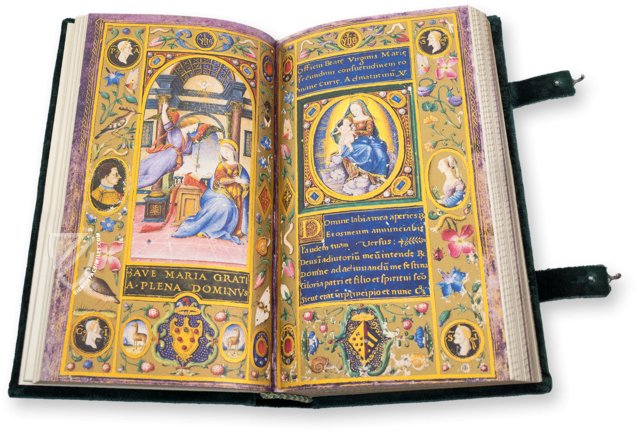 Surrounded by sapphires, pearls, and plenty of gold, the Virgin Mary is shown seated on a cloud and holding the baby Jesus, who grabs at her distinctive blue cloak and appears to be fidgeting as Mary attempts to hold on to him – even the son of God could be a handful. Mary is otherwise richly dressed, and her red dress is highlighted with strokes of gold ink. Books of hours intended for women naturally emphasized the role of the Virgin Mary and various female saints. 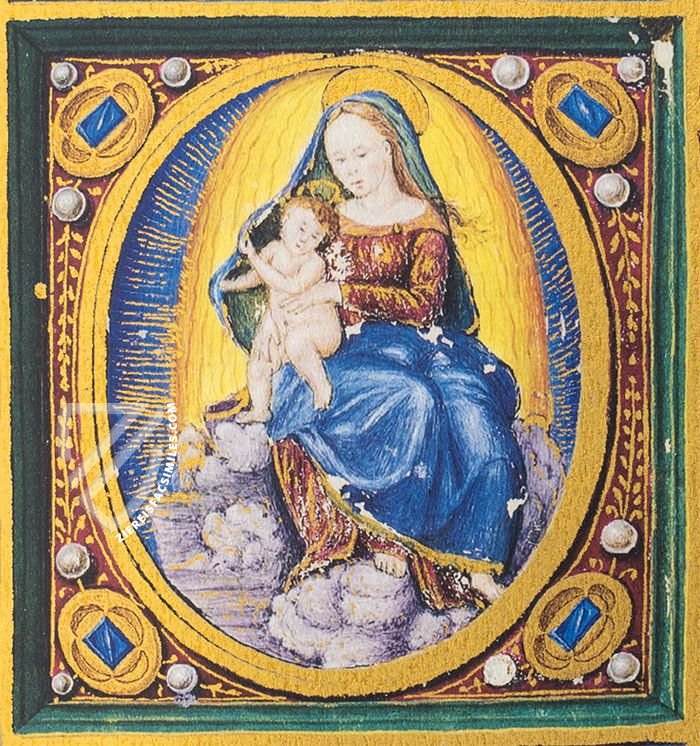 “Lord, do not rebuke me in your anger or discipline me in your wrath.” So begins Psalm 6 on a splendid incipit page featuring a historiated initial with King David, gold script against a purple background, and a richly embellished frame featuring portraits of rulers, deer, vegetal motifs, gems, vases, and the image of a woman holding a quill and standing next to a wheel.

King David is depicted as an aging man with a long white beard and dressed in a red robbed trimmed with gold. Rather than holding a classical lyre, he holds a more advanced Renaissance instrument resembling a zither, which can be played by either strumming or plucking the strings. The image is so detailed that the composer-king is shown holding some kind of plectrum. 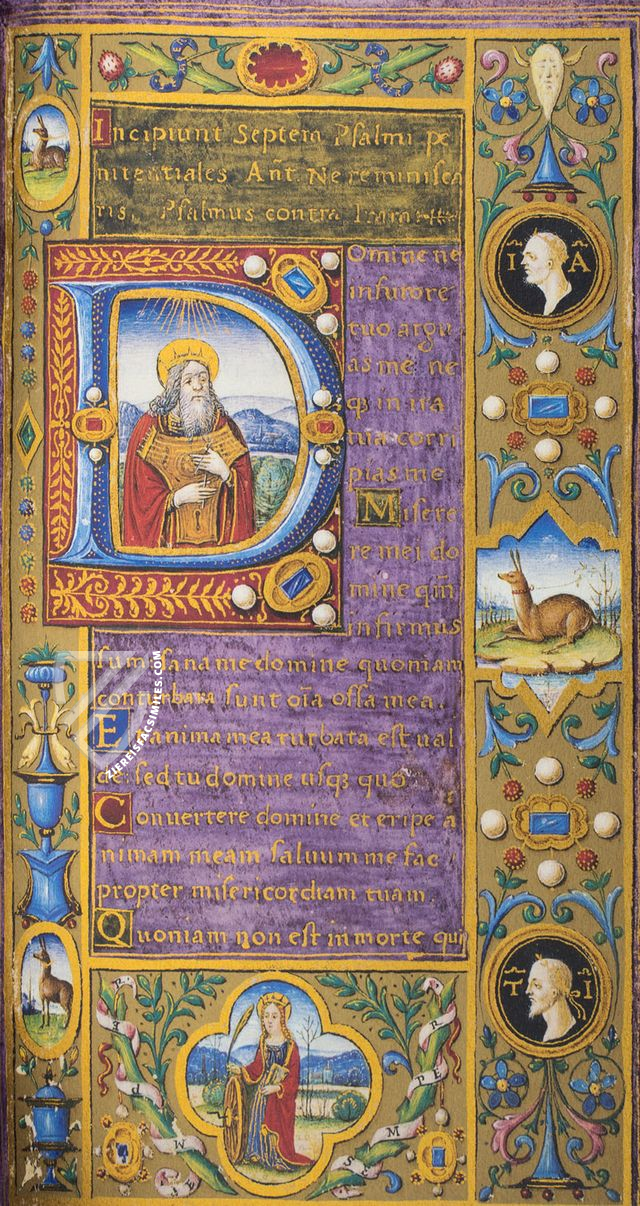 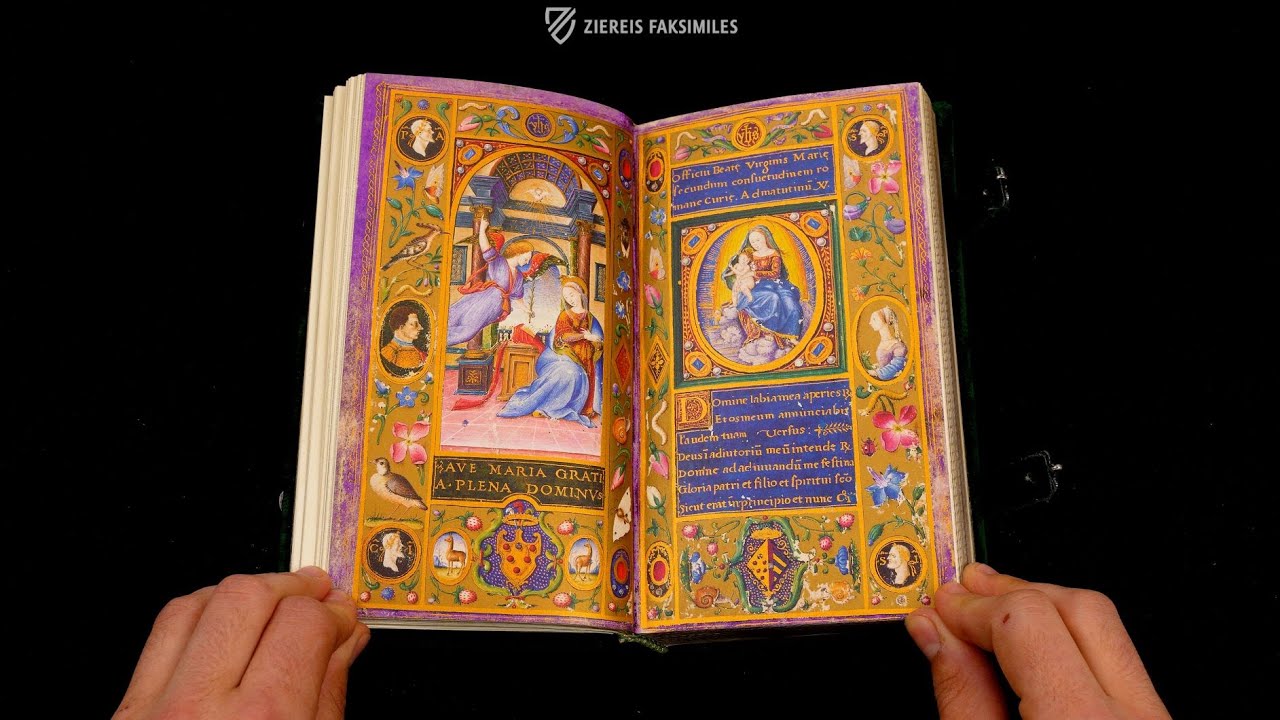 Publisher: Istituto dell'Enciclopedia Italiana - Treccani – Rome, 2007
Limited Edition: 750 copies
Binding: Green velvet with silver medallion and clasps
Commentary: 1 volume (220 pages)
Language: Italian
1 volume: Exact reproduction of the original document (extent, color and size) Reproduction of the entire original document as detailed as possible (scope, format, colors). All folios are cut according to the original. The binding may not correspond to the original or current document binding.
Price Category: €€ (1,000€ - 3,000€)
Edition available
Price: Log in here!
Order / Ask a Question
You might also be interested in: 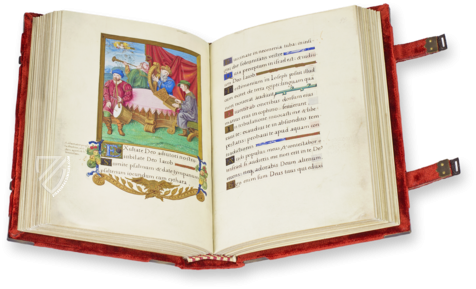 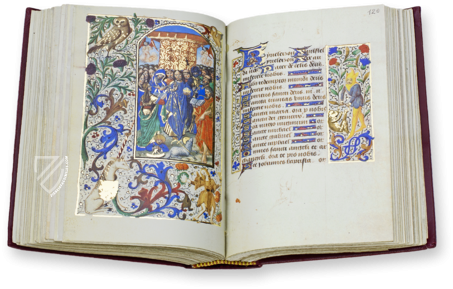 For example, the peacock with its magnificent train as a symbol of Pride: a book of hours with a unique cycle of miniatures illustrating the Seven Deadly Sins with examples of animals