The Saxon World Chronicle is the earliest world chronicle in the German speaking world to be written in prose, not the verse form that was previously common. It is recorded in numerous manuscripts. The most magnificent and expensive transmission is the Gothaer Codex. Accompanied by brightly colored and realistic illumination, the chronicle relates the history of the world from its creation, through the events of antiquity, up to the Investiture Controversy of the 11th century.

Book of the World: The Saxon World Chronicle

The Saxon World Chronicle depicts the most important historical events of the Christian world in an admirable symbiosis of text and illustration. Initiated with the story of Cain and Abel, the creation of the world, and the sequential stories of the Old and New Testaments, the Saxon World Chronicle relates history from antiquity to the barbarian migrations and the Investiture Controvery between the Holy Roman Emperor and the Pope. No harrowing detail of Christian history was left out.

Scholarship that is open to the Laity

World chronicles that were created in the early Christian period were completely Bible-oriented. Great early-medieval writers such as St. Jerome and Eusebius created a new variety that interpreted events in world history. These great thinkers nevertheless penned their writings in Latin, the universal language of the educated. In order to make the works of the learned accessible to general population, it was decided in the 13th century to create a German-language chronicle of world history.

A Book as Rich in History as its Content

The Saxon World Chronicle was first created in the magnificent Gothaer Codex. Brilliant writer and illuminators worked on this codex together, which was stored in Wittenberg until the 17th century, before it was brought to Gotha. The codex was thought to have been lost after the Soviet occupation, taken as a spoil of war back to St. Petersburg. However it was returned to Gotha a short time thereafter.

A Perfect Interaction of Text and Illustration

The miniatures of this codex, which is counted as being among the most excellent illuminated manuscripts in all of European art, depicts in astounding exactness and detail the events which are related in the text. For example, the seven days of the week were assigned seven Roman gods and for the embellishment of this association, the following pages told of the seven fabled kings of Rome. The splendidly designed color illustrations are ordered so that they are found directly next to the corresponding text. Consequently, the most important moments of the narrative enter the imagination of the reader with the aid of the magnificently colored illustrations. 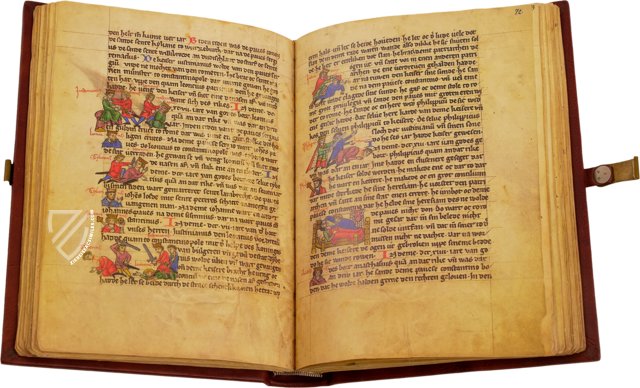 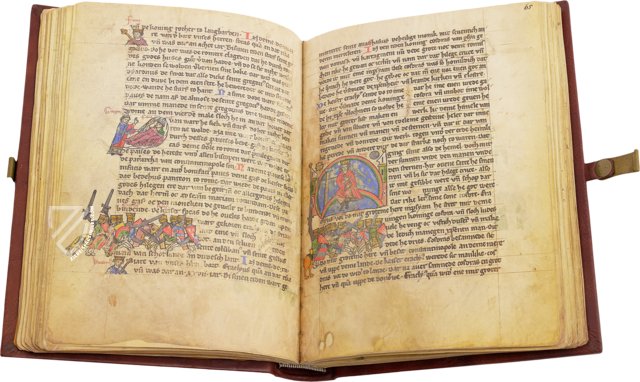 The Overthrow and Death of Emperor Justinian II

The Byzantine Emperor Justinian II was an ambitious ruler, but his despotism generated much opposition to his reign. After he was overthrown for the second time in 711, he was abandoned by his soldiers in favor of the exiled general Bardanes, who assumed the regnal name Philippicus. Already wearing a crown, he is depicted wielding a sword while slaying Justinian II and his son Tiberius. Below, Emperor Philippicus holds a scepter, but his hair has changed from blonde to brown and he is now bearded. 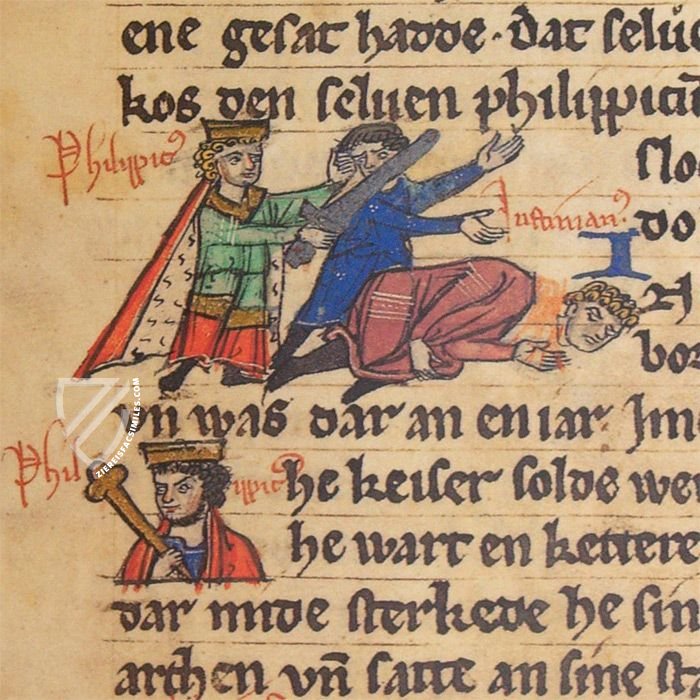 The uppermost image of the page shows Henry III, already crowned and accompanied by his wife Agnes, while he is consecrated as emperor by Pope Clement II, who stands on the right with an open book and a flowering twig. Below them, a tonsured priest speaks to a carpenter concerning a prophecy about his son Hildebrand.

At the bottom, Henry and his wife are sleeping in a fortified camp as the Emperor’s dream portending the Investiture Crisis is illustrated in the lower margin: with his tonsure, huge horns, and empty hanging sleeves, Hildebrand – later Pope Gregory VII – throws his son – later Emperor Henry IV – into the dirt. Both their hands and faces are dirty, emphasizing that they will both be tarnished by the conflict between pope and emperor. 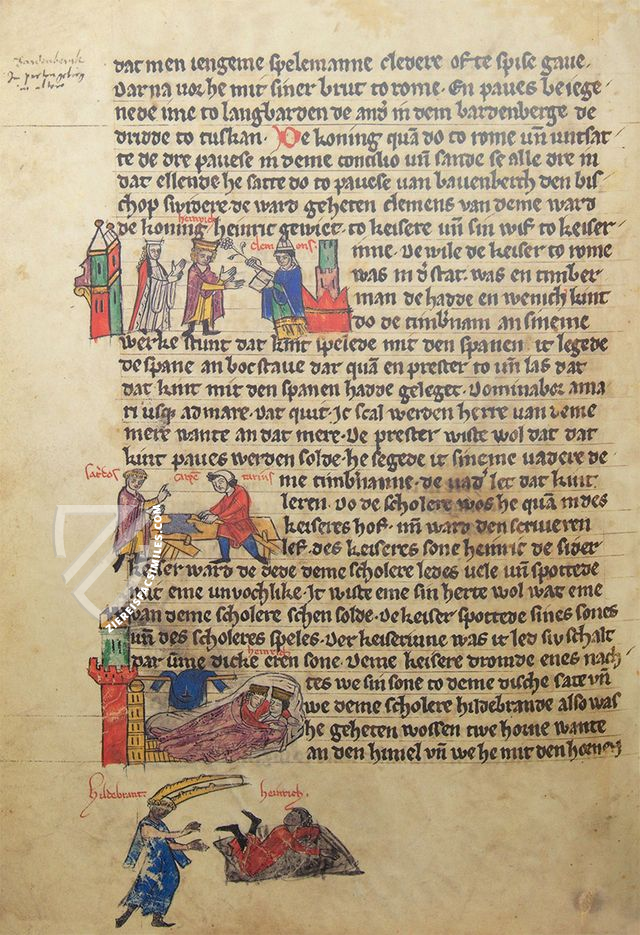 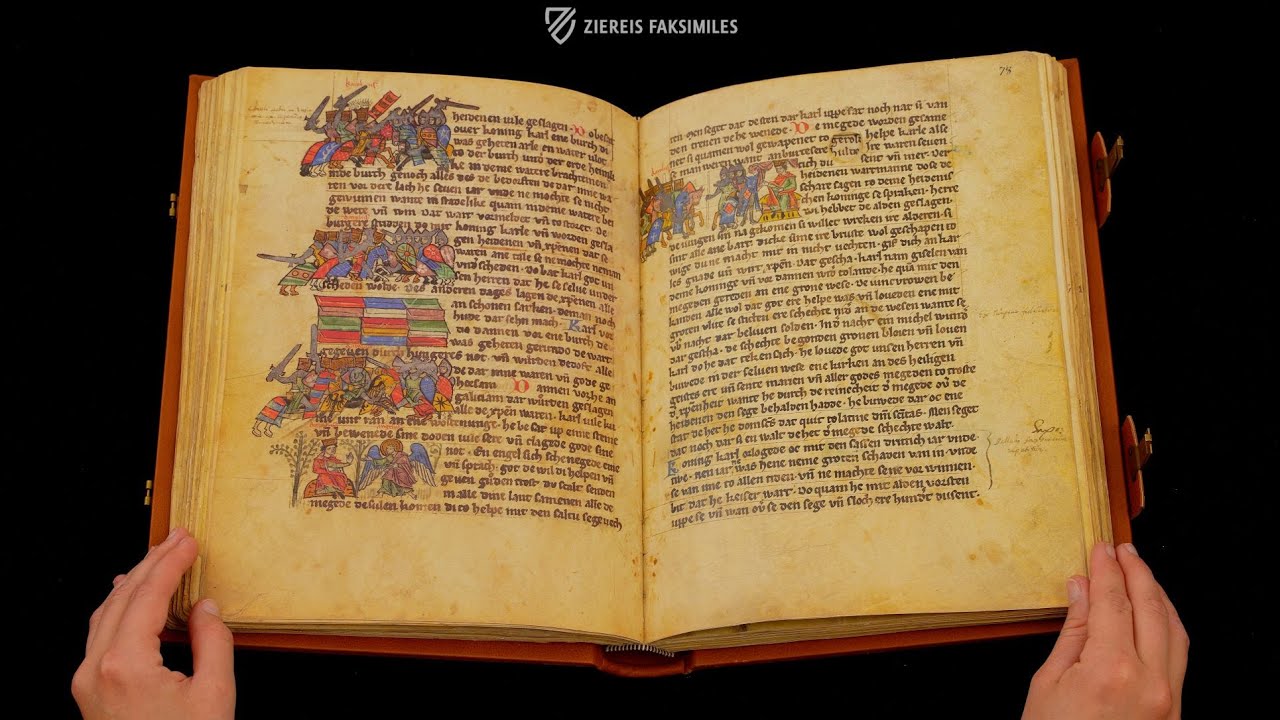 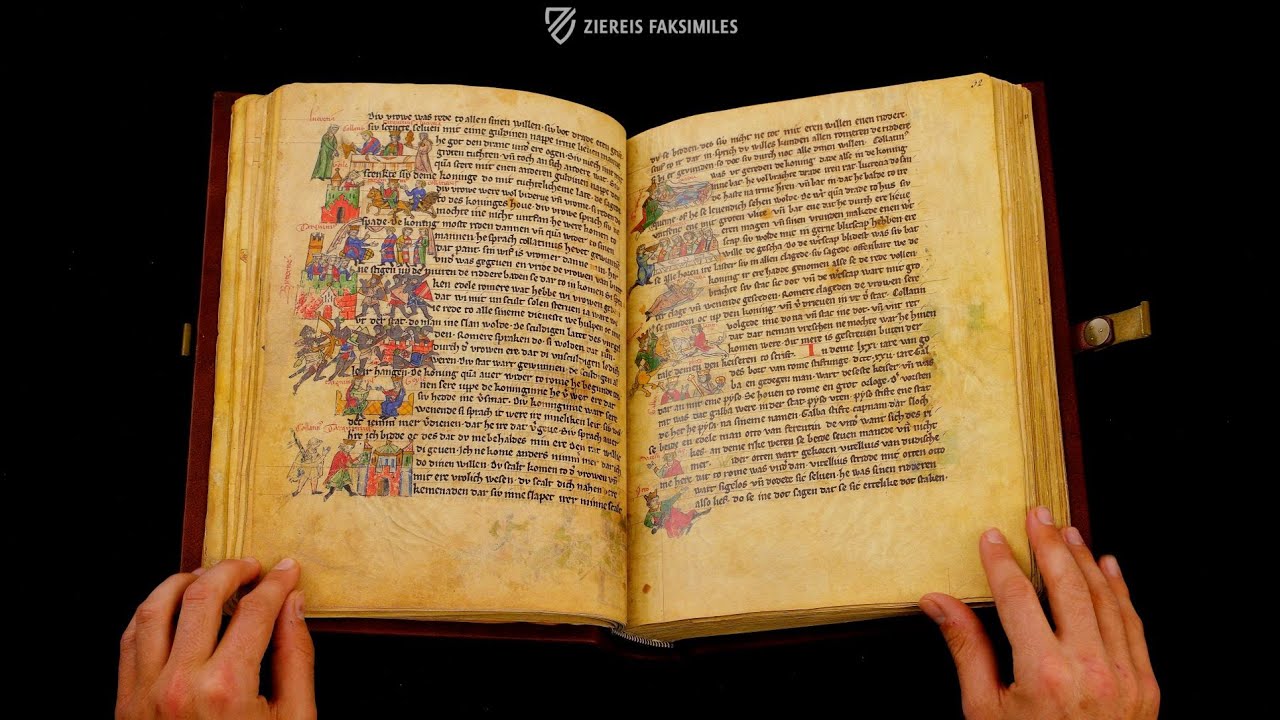 Publisher: Coron Verlag – Zurich, 2000
Limited Edition: 333 copies (Deluxe Edition)
Binding: Brown embossed cowhide binding with 5 brass bosses on each front and back cover and fitted with one brass clasp. Stored in a brown suede jewelry case with a replica of the famous Barbarossa seal on the lid.
Commentary: 1 volume by Prof. Dr. Hubert Herkommer, Dr. Renate Kroos, Prof. Dr. Rudolf Große, Dr. Karin Schneide and Dr. Maria Mitscherling
Language: German
1 volume: Exact reproduction of the original document (extent, color and size) Reproduction of the entire original document as detailed as possible (scope, format, colors). The binding may not correspond to the original or current document binding.
Formerly4,980 €
Special Offer until 30.11.2022 (like new)1,899 €
Order / Ask a Question
You might also be interested in: 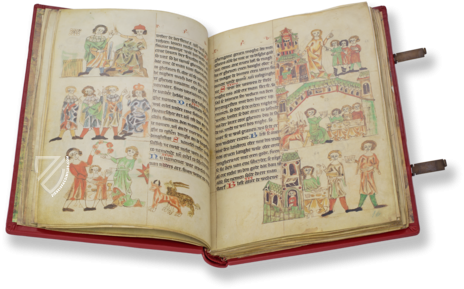 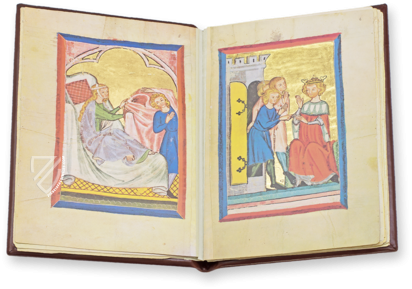