The Brussels Hours is an illuminated manuscript that played an outstanding role in medieval French illumination. It originated ca. 1400 and neither a patron nor a maker of the masterpiece can be conclusively determined to this day. An illustrative technique, which was previously only used in panel painting, was employed in this private prayer book for the first time. In this way, the dreamlike pictures of the manuscript gained a significance that made the miniatures into small, independent works of art. Without text, the depictions also develop an intangible effect. The manuscript ensured a revolution of French manuscript and illumination art.

The mysterious Brussels Hours is not only noteworthy because of its artful, unbelievably high-quality illumination. It is simultaneously a codex whose origin story cannot be fully explained to this day. The private prayer and devotional book originating from ca. 1400 is comprised of 276 pages with 20 stunning full-page miniatures. A particularly enchanting characteristic of the manuscript is the recurring depiction of a wounded swan, interpreted by experts as a sign of the memory of a great, painful love. The pictures were produced using a particularly technical process in their form and execution and do not correspond to the typical book illustrations of their time. The Brussels Hours is a work of truly groundbreaking and modern style.

The Mysterious Origin of the Codex

The patron of the Brussels Hours cannot be determined with certainty to this day. However, evidence suggests that it could be Jean de Valois, Duke of Berry. Depictions of the ducal escutcheon, ducal emblems, and the monogram “VE” in the illuminated manuscript clearly support this thesis. A lively discussion concerning the composer of the masterpiece also exists among modern researchers. André Beauneveu, a sculptor and painter from Hainaut, has been considered as a possible master of the book. Beauneveu became famous for his works for the French court, in particular for an introductory miniature in the Duke of Berry’s famous psalter. The artist is equally responsible for an entire series of imposing tomb statues for the Abbey of St. Denis. The conception and preliminary drawings of the miniatures could also possible be traced back to the illuminator Jacquemart, who was in the service of the Duke of Berry since 1384. In any case, the Brussels Hours were made by a master who revolutionized the craft of illuminated manuscripts.

The illumination of the Brussels Hours boasts a few special characteristics, which arise for the first time in the history of the manuscript book art of the Middle Ages. The undetermined master of the book of hours used a method of coloration that had previously appeared exclusively in panel painting. This is the so-called demi-grisaille technique. Grisaille indicates a type of painting which is done exclusively in grey, white, and black. In the demi-grisaille, the monochromatic coloration is enriched with powerfully luminous dashes of color. A unique play of light and volume is created through this original artistic method, which really comes into its own in a double-page illustration in the Brussels Hours. The book made an additional key innovation of book illustration acceptable. The miniatures of the manuscript fill entire pages, which was never the case previously, and affect the beholder like a window into illustrated scenery. Consequently, the miniature was lent an autonomous status for the first time, in which the impact of the picture unfolded completely free of accompanying text. This manner of illumination was a groundbreaking innovation for French illumination in the Middle Ages, which makes the Brussels Hours the source of Gothic illumination. 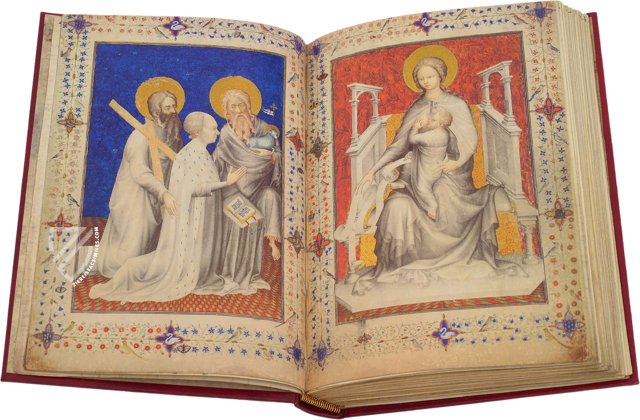 Burdened by the weight of his cross, we see Christ on the road to Golgotha, also known as Calvary, and followed immediately by his mother, who holds her hand up to her face in horror and despair. Mary Magdalene, dressed in red, comforts the Virgin Mary with a hand on her shoulder. With their hands bound, the two thieves who are to be crucified with Jesus are drawn along by soldiers. Each individual in the throng of people has a unique and expressive countenance on their face. 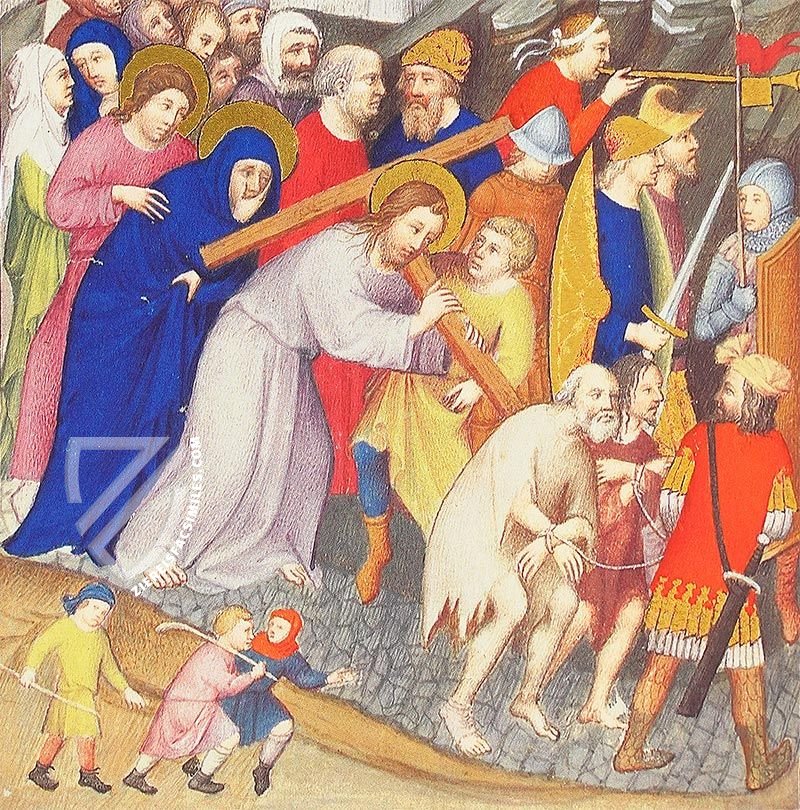 Portrait of the Duke of Berry in Prayer

This miniature and the Madonna and Child that appears opposite of it are milestones of illumination. The so-called demi-grisaille technique, previously reserved for panel painting, was employed in an illuminated manuscript for the first time here. Although it cannot be said for certain, numerous symbols indicate that the figure praying is Jean Duc de Berry, the greatest bibliophile of the Middle Ages.

The grisaille technique, which is limited to gray, white, and black, is elaborated here with luminous colors. A sense of perspective is created by the red/white checkered floor, while the sumptuous blue background seems to suspend space and time. In another first, the miniatures are presented entirely without text, allowing them to speak for themselves. 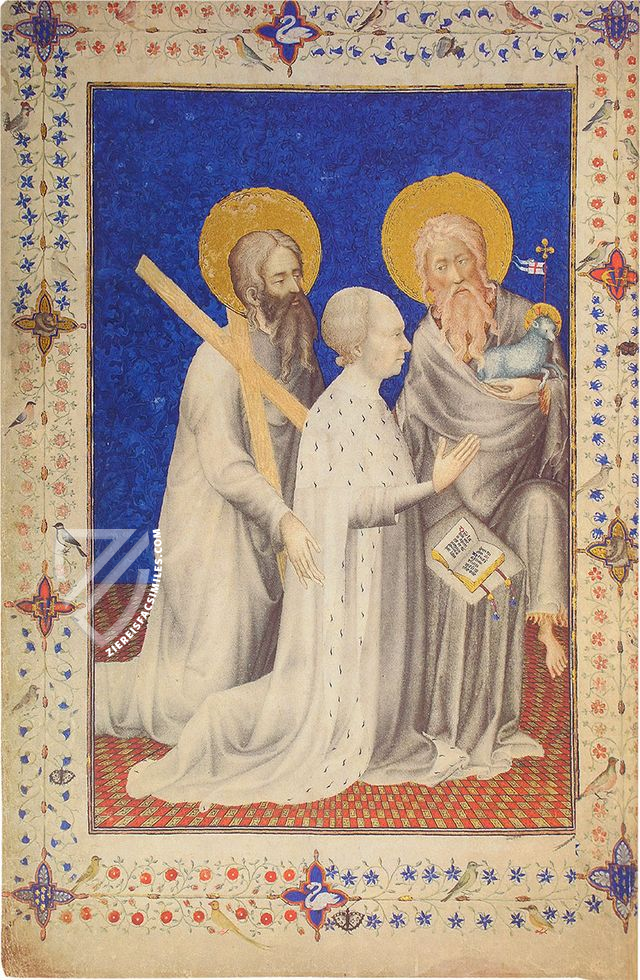 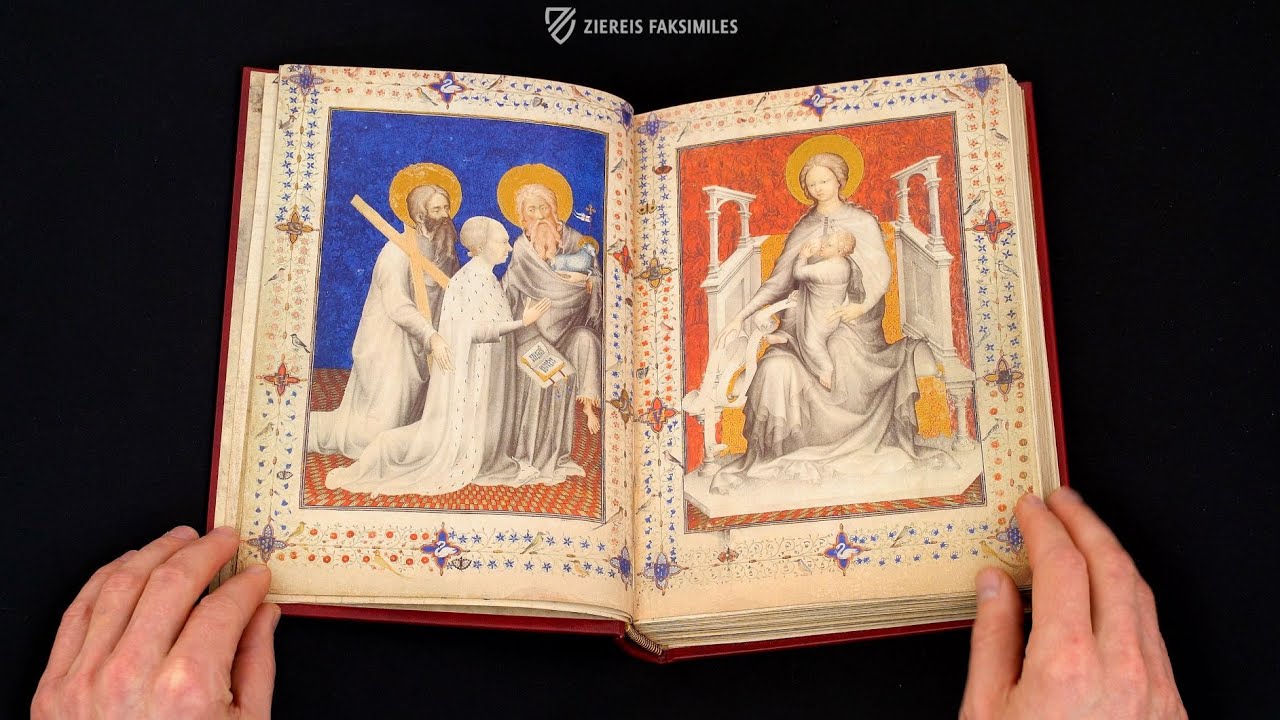 Publisher: Faksimile Verlag – Lucerne, 1996
Limited Edition: 980 copies
Binding: Red kidskin cover, expensively decorated with gold and embossing. Both the facsimile edition and the commentary volume are available in a protective case made of acrylic glass.
Commentary: 1 volume (293 pages) by Pierre Cockshaw, Bernard Bousmanne, and Gerhard Schmidt
Languages: French, German
1 volume: Exact reproduction of the original document (extent, color and size) Reproduction of the entire original document as detailed as possible (scope, format, colors). The binding may not correspond to the original or current document binding.
Price Category: €€ (1,000€ - 3,000€)
Edition available
Price: Log in here!
Order / Ask a Question
You might also be interested in: 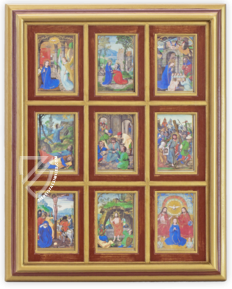 The art of a genius painter presented in a unique way: the book art of Simon Bening in a wooden frame as an altar for the Queen of Spain 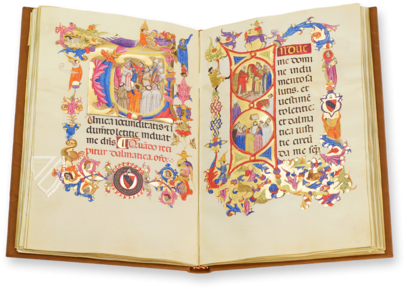