A royal manuscript from the early 15th century with one of the most fascinating texts of the Middle Ages: the travelogue of the mysterious Jean de Mandeville in the Holy Land and the furthermost and most exotic realms of the world as it was then known. Created for Duke John the Fearless of Burgundy, this gem came into the possession of the famous collector Jean de Berry shortly after its completion and remained thereafter in the possession of the French monarchy. Obviously, the handsome miniature decoration of the manuscript originated from the greatest masters of their time!

Over the pilgrim trails to Jerusalem and its holy sites, the mysterious Jean de Mandeville, author of one of the most famous travelogues of the Middle Ages, next came to Egypt. From there, he is supposed to have continued with his expedition into the Middle East, to India, China, Africa, the island world of the Indian Ocean, and finally into increasingly exotic domains of the world. He claimed to have travelled over the course of 30 years, from 1322 to 1356, and in doing so saw regions, cultures, and wonders that no other western visitor before him caught a glimpse of. As a result, the descriptions of the land, each further and further removed from the known world, become more and more fantastical.

The Fascination of the Foreign

As fantastic as the The Travels of Sir Jean de Mandeville sounded, the account was just as successful. Whoever was really behind the mysterious pseudonym of Jean de Mandeville, who presented himself as an English knight, remains contested to this day. In any case, he came world famous as the author of a compiled travelogue written in French between 1357 and 1371 **. In doing so, he not only made use of his own, presumably realistic experiences, but also **numerous sources from historiography and literature, e.g. the Legenda Aurea by Jacobus de Voragine, the Rhabanus Maurus, or the Arthurian legend.

This novel-like travelogue by the mysterious first-person narrator Jean de Mandeville can be found in manuscript Français 2810 of the Bibliothèque Nationale de France in the famous Book of Wonders. On 168 pages, the text is divided into two columns with gorgeous miniatures in the style of the early 15th century. It is an outstanding testimonial to this great period of French illumination and was designed by three major miniaturists: the Mazarine Master (49 miniatures), the Cité des Dames Master, and the Egerton Master (19 miniatures). They created fantastic scenery from new pictorial inventions, surrounded by fine ornamental gothic tendrils and with opulent gold on every page.

In the Possession of Nobles and Royals from the Beginning

The splendor of this jewel is reminiscent of a truly royal manuscript. It originated in Paris between January of 1410 and the end of 1412 at the behest of John the Fearless, Duke of Burgundy. In 1413, he gifted the manuscript to his uncle Jean de Berry, whose coat of arms can be found in the manuscript. The magnificent edition of The Travels of Sir Jean de Mandeville passed through the hands of more famous owners until it reached King François I (1494–1547), whereby it found its place from then on in the royal library in Fontainebleau. 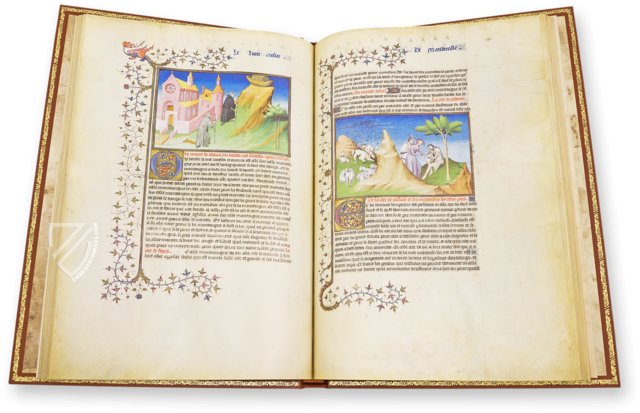 Abraham and Isaac; Joseph in the Well

This miniature unites two stories from Genesis dealing with fathers and sons. Left: God tests Abraham’s faith by ordering him to sacrifice his only son, Isaac, but at the last moment when the wood for the burnt offering is laid and Abraham is about to kill his son an angel appears to spare Isaac. Right: Jacob’s favorite son Joseph is thrown into a well by his jealous brothers, who then sell him into slavery in Egypt where he will rise to become Vizier to the Pharaoh. 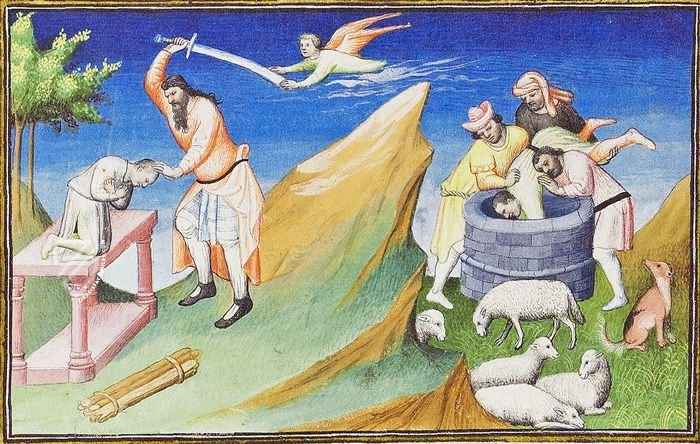 Dressed in green and red tights and a red cloak with the three golden lions of the royal arms of England, a king bids farewell to Mandeville, dressed in a white pilgrim’s robe with a gold cross on his breast, but girded with a sword for the harrowing journey ahead of him. A squire holds onto the reigns of Mandeville’s appropriately white horse as he says his goodbyes.

The coat of arms in the decorative initial below identifies the figure of the king as Edward III, who transformed the Kingdom of England into a great military power and laid claim to the French throne, beginning the Hundred Years’ War. Below the text in the brightly colored leafy tendril frame, there is a small medallion containing a lion holding a spear with a red banner. 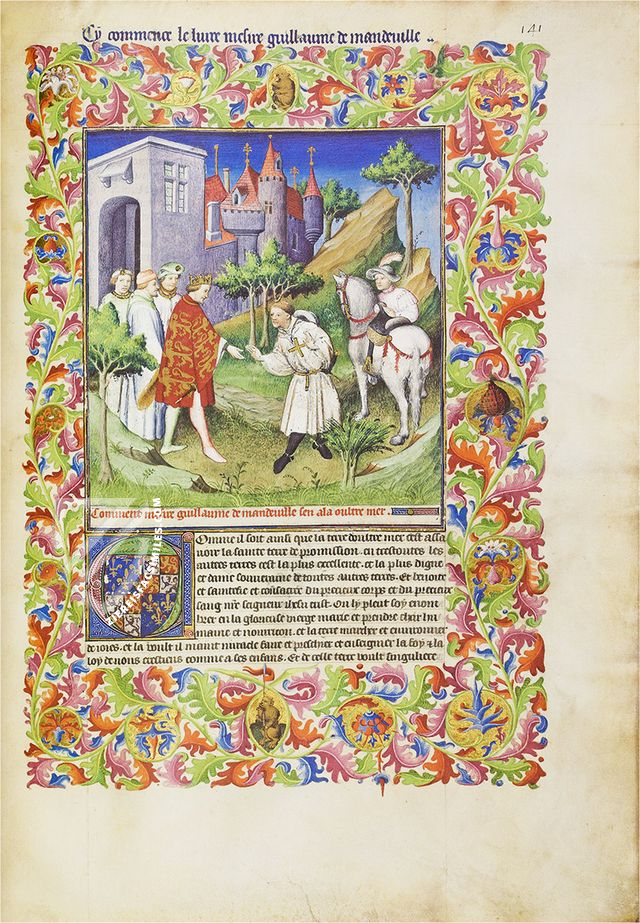 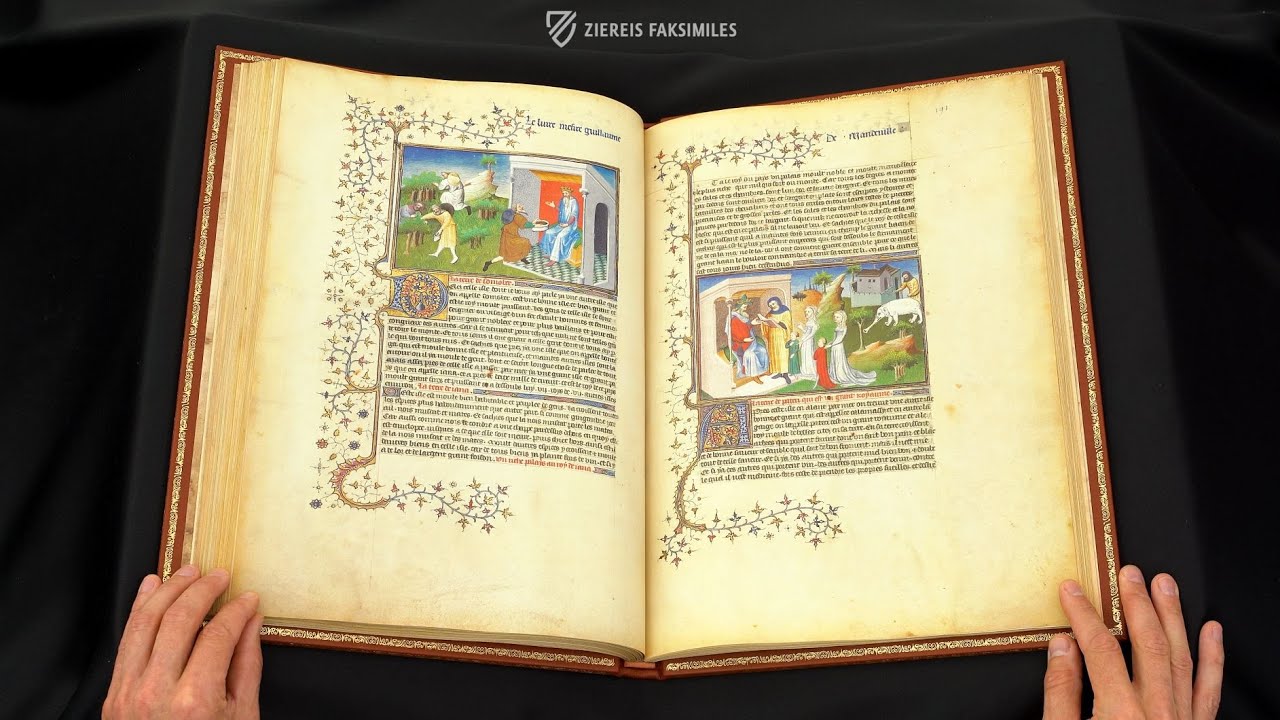 Publisher: Müller & Schindler – Simbach am Inn, 2017
Limited Edition: 900 copies
Binding: Leather on boards, decorated with gold embossing.
Commentary: 1 volume
1 volume: This facsimile is not complete. Reproduction of the entire original document as detailed as possible (scope, format, colors). The binding may not correspond to the original or current document binding.
Price Category: €€€ (3,000€ - 7,000€)
Edition available
Price: Login here!
Order / Ask a Question
You might also be interested in: