A famous late medieval travelogue by Bernhard von Breydenbach (ca. 1440–1497), a politician from the Electorate of Mainz, was published in both Latin and German in 1486 and recounts his pilgrimage to Jerusalem in 1483-4. It was an instant success and appeared in at least 13 editions over the course of the next 30 years, including numerous translations. The woodcuts by Erhard Reuwich (ca. 1450 – ca. 1505) are art-historically significant, representing a number of firsts for graphic art. As such, they were sent across Europe for the numerous editions that followed the Latin and German originals, and were later adopted for other significant works. The 1498 Spanish edition at hand of A Pilgrimage to the Holy Land is arguably the most comprehensive and richly illustrated edition of this bestselling incunabulum (book printed before 1501).

Travelogues were among the most popular literary forms of the Middle Ages, a time when being a world traveler was to be something of a celebrity because of the barriers and dangers ranging from weather to bandits. A famous late medieval travelogue by Bernhard von Breydenbach (ca. 1440–1497), a politician from the Electorate of Mainz, was published in both Latin and German in 1486 and recounts his pilgrimage to Jerusalem in 1483-4. Originally titled Peregrinatio in Terram Sanctam or “A Pilgrimage to the Holy Land” in English, the narrative may have been dictated by Breydenbach, also spelled Breidenbach, to a monk. It was an instant success and appeared in at least 13 editions over the course of the next 30 years, including numerous translations. The woodcuts by Erhard Reuwich (ca. 1450 – ca. 1505) are art-historically significant and were later adapted by Michael Wolgemut (1434–1519) for his 1493 Nuremberg Chronicle. This bestseller is one of the most significant early achievements in the emerging art of printed books.

This Spanish translation of Martín Martínez de Ampiés (d. ca. 1513), a Catalonian nobleman, soldier, and author, was published on January 16th, 1498 by Pablo Hurus (d. 1505) in Zaragoza and retains the masterful and historic woodcuts of the German original along with the Gothic script. The Spanish translator and the German publisher collaborated on numerous luxury codices at the turn of the 16th century. It is the only edition to feature a cityscape of Rome, which is inspired by a woodcut from the Liber Chronicarum by Hartmann Schedel (1440–1514), first printed in 1493 by Anton Koberger (ca. 1440/45–1513) in Nuremberg, and also features a list of pilgrims to the Holy Land that was appended over the course of the following two centuries. As such, this is arguably the most comprehensive and richly illustrated edition of this bestselling incunabulum (book printed before 1501).

Erhard Reuwich (ca. 1450 – ca. 1505), a Dutch artist and printer active in Mainz in the 1480’s, was from a family of painters in Utrecht. He is responsible for the woodcuts that adorn the text and accompanied Breydenbach to the Holy Land. His woodcuts represent an artistic milestone in and of themselves. Reuwich’s woodcuts were so highly regarded that they were shipped to other parts of Europe for the text’s various translations – there was simply nothing for local artists to approve upon because the most skilled engravers of this period were almost exclusively German. Even the colophon contains a small artistic milestone: the coat-of-arms of the Archbishop of Mainz features the first cross-hatching in a woodcut. Mainz is additionally featured in an allegorical scene. Aside from the realistic depiction of cities, both in cityscapes and in architectural scenes that possess a surprising degree of perspectival accuracy, the woodcuts are also significant for their size: there are 8 foldout woodcuts, the largest is a panorama of Venice measuring 160 x 30 cm. Other noteworthy woodcuts include a three-block map of Egypt and Palestine, which also represents the oldest surviving printed map of Jerusalem, and five other cityscapes of prominent contemporary Mediterranean metropolises: Iraklion, Modon, Rhodes, Corfu, and Parenzo. Since the travelogue represents a quasi-study of the Near East, it also contains 14 artful depictions of the local dress and animals (though not all of the latter were real), as well as the first printed Arabic alphabet. 66 woodcuts of biblical scenes round out the adornment of this sought-after incunabulum.

Some Apostles look incredulous, others humbled, but all listen intently as Jesus explains the meaning of this gesture: “If I then, your Lord and Teacher, have washed your feet, you also ought to wash one another’s feet. For I have given you an example, that you should do as I have done to you. Most assuredly, I say to you, a servant is not greater than his master; nor is he who is sent greater than he who sent him. If you know these things, blessed are you if you do them.” (Jn. 13:13-17) 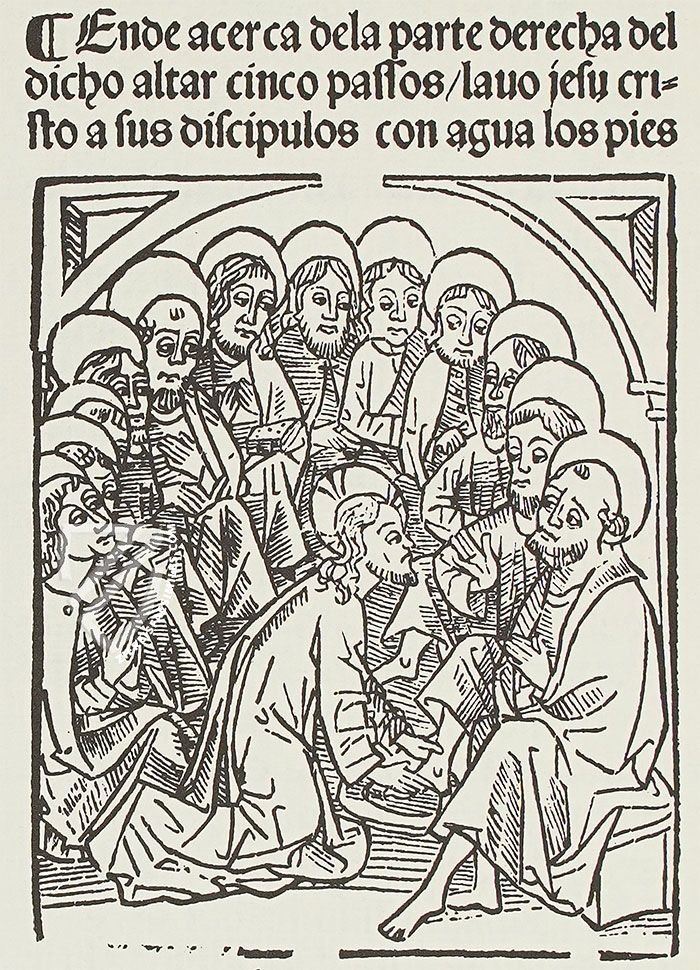 The frontispiece of this book is undoubtedly one of the finest woodcuts of the 15th century and is a testament to the great skill of Erhard Reuwich. Cross-hatching was used for the first time in the shadows, drapery folds, in the upper part of the shields, and the underside of the top of the frame, which has nine cherubs climbing among the branches.

Saint Catherine, patroness of learned men, stands on a pedestal with her right arm extended toward the coat of arms of Bernard de Breydenbach. His two companions on the pilgrimage to the Holy Sepulchre in Jerusalem and the shrine of St. Catherine on Mount Sinai – John, Count of Solms and Lord of Mintzenberg and a knight named Philip de Bicken – are also represented by shields with banderoles. 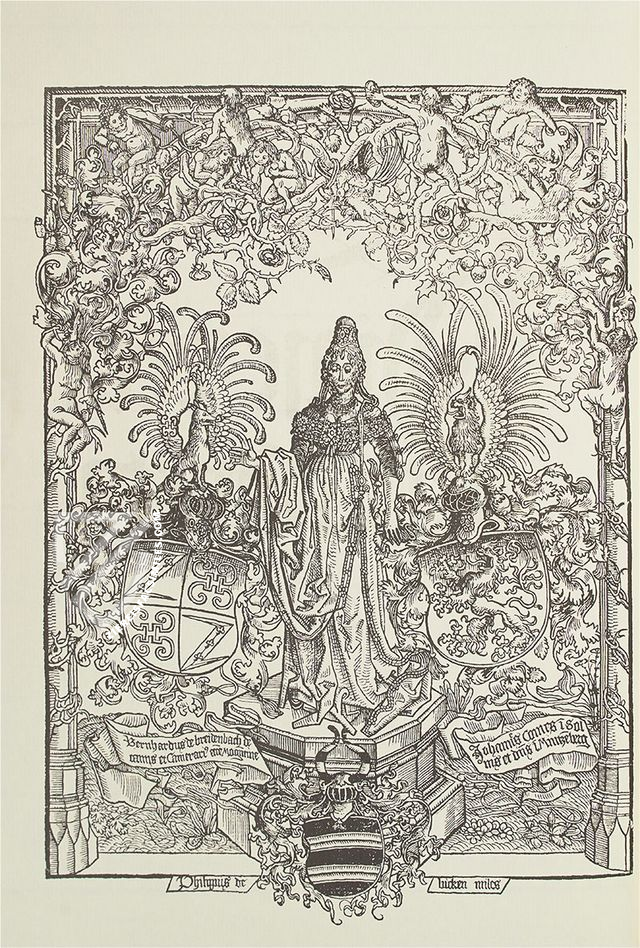 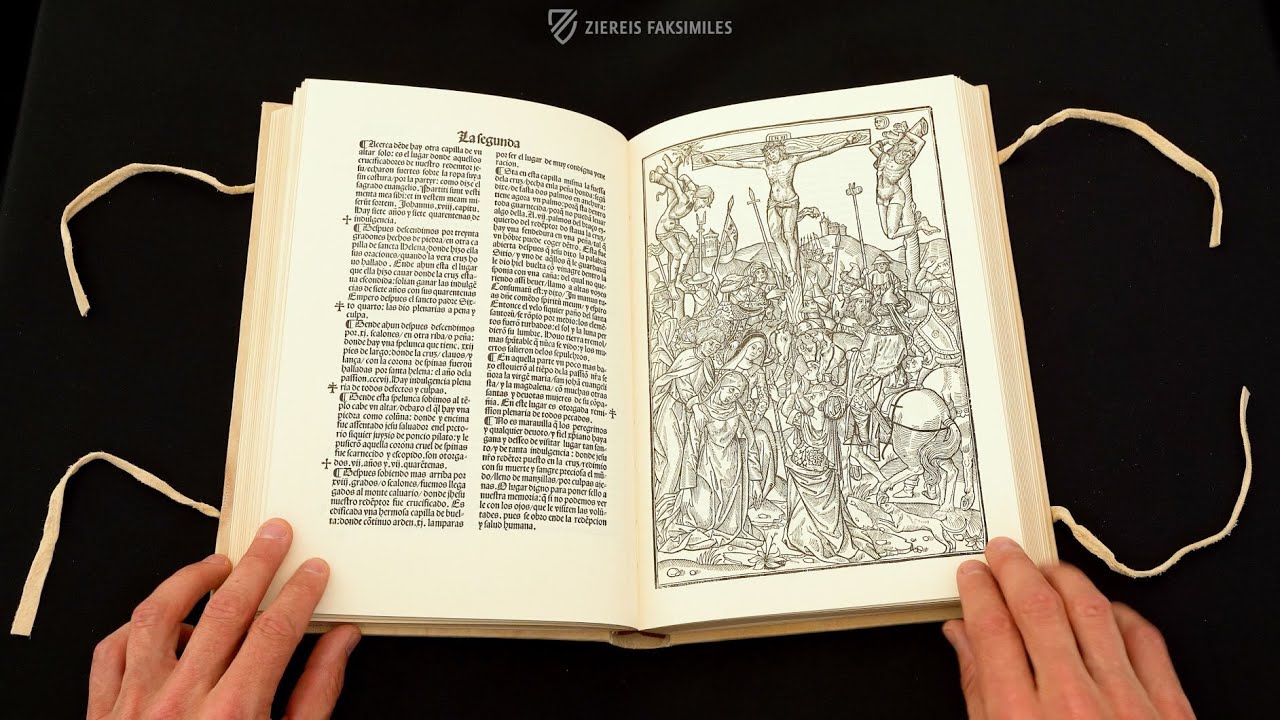