A true milestone of cartography was created in 1375 by Abraham Cresques, a Jewish master mapmaker and builder of clocks, compasses, and other nautical instruments from Palma, Mallorca. Working at the behest of Prince John, the future King of Aragon, Cresques and his son Jehuda set about creating a set of nautical charts that would surpass all contemporaries and be presented as a royal gift to John’s cousin, who would become King Charles IV of France. The work consists of six vellum folios, which were richly painted and illuminated with gold and silver. Its first two leaves contain illustrated Catalan texts concerning cosmography, astronomy, and astrology emphasizing the spherical nature of the Earth. The four remaining leaves comprise the map itself, which is surprisingly accurate and contains the first ornate compass rose drawn on a map. Cresques also incorporated information from the travelogues of Marco Polo and Sir John Mandeville. To protect the work, it was mounted on five wooden panels tied end to end in a leather binding created by Simon Vostre ca. 1515.

This famous portolan atlas depicts the world from the Atlantic to China as it was known to Europeans ca. 1375. While the maps of Europe, North Africa, and the Middle East are fairly accurate and useful, the maps of Asia much less though, although many Indian and Chinese cities can be identified. The Asian maps represent a synthesis of medieval mappae mundi and travel literature, notably Marco Polo's Il Milione and the Travels and Voyage of Sir John Mandeville, and contain numerous religious references. Abraham Cresques (1325–1387), whose proper name was Cresques (son of) Abraham, is credited with creating this masterpiece of the Mallorcan cartographic school – the first known atlas to incorporate a compass rose – in his workshop in Palma.

A Gift Fit for a King

The evidence attributing the map to Cresques and his son Jehuda is circumstantial because there is no signature or other mark indicating who made it. However, in November of 1381, a young John I of Aragon (1350–96), who was Duke of Gerona at the time, wanted to send a splendid gift to the newly crowned King Charles VI of France (1368–1422), who was also a first cousin of his wife Violant de Bar. The Crown of Aragon often gave elaborately decorated maps as gifts and the Cresques were known to have produced several of these maps during the period. Furthermore, a letter from Duke John calls on “Cresque the Jew who made said world map” and his son to provide him with useful information that he can in turn give to the emissary of the King of France. The father-son team was paid 150 Aragonese Florins and 60 Mallorcan pounds for their work on the atlas.

An Exemplary Specimen of the Mallorcan School

The Catalan Atlas consists of six vertically folded leaves of fine vellum painted with expensive paints, gold, and silver and measuring ca. 64.5 x 50 cm that when assembled create a world map centered on the Mediterranean measuring 65 × 300 cm. Aside from its beauty it also contains numerous features typical of the Mallorcan school of cartography. Each city’s allegiance is indicated by a flag and African and Asian kingdoms have images of their sovereigns, usually but not always enthroned. Christian cities are marked with crosses while others have onion shaped domes. Some cities have flags with the Star of David. Red ink is used for the names of important ports while all other are written in black. Wavy blue lines symbolize the swirling waters of the world’s oceans. Overall, the illustrations and text are oriented toward the edges of the map, indicating that it was designed to be laid flat on a large table that the beholder could then walk around and observe from all sides.

The first two sheets consist of tables and diagrams for calculating the tides, moveable feast days, and a diagram of the so-called Zodiac Man (first sheet) as well as a lunisolar calendar for calculating the phases of the Moon throughout the year with zodiac signs, accompanying texts and representations of the four seasons in the corners (second sheet). Beginning in the West, sheets three through six contain four maps spanning from 10° to 60° north latitude and between 20° west and 120° east longitude, thus the Southern Hemisphere is omitted. As the maps move eastward, the lack of geographical information is compensated for by rich ornamentation that simultaneously fills the empty space and fueled the curiosity of the people of medieval Europe towards the wide and fabled lands of the East. This includes miniatures depicting Kublai Kahn, the creation of man, Gog and Magog, Alexander the Great, and even the Antichrist. 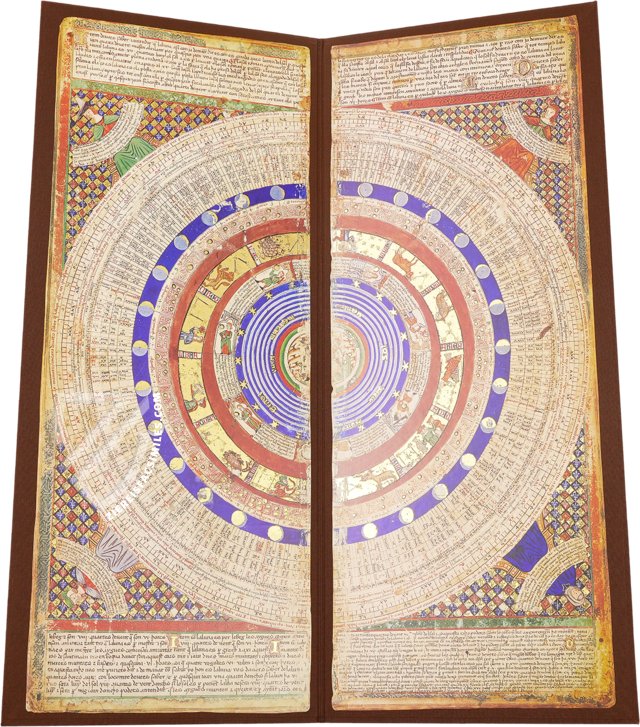 The caption above this colorful caravan of camels loaded with goods followed by servants on foot and merchants on horseback reads: “This caravan left the empire of Sarra to go to Cathay.” Up until the early modern period, Cathay was the word used for China but the identity of Sarra is less clear. However, a neighboring passage says that travelers stop and rest for up to a week in a town called Lop, which could correspond to the Lop Desert in western China. The passage also claims that travelers who get separated from their companions at night can be deceived by the voices of demons and be led astray in the desert. 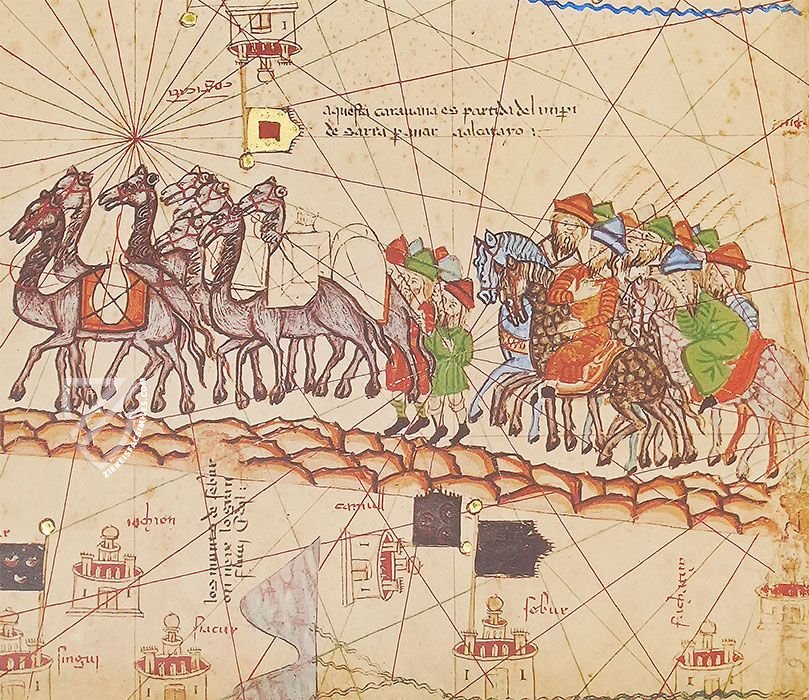 The first section of this famous atlas depicts the eastern shores of the Atlantic Ocean as well as the regions surrounding the Western Mediterranean. It stretches from Norway and the Shetland Islands in the North Sea to the deserts of the Sahara, which features a merchant riding a camel past a group of tents. This section is famous inter alia for featuring the first ornate compass rose, which is depicted northwest of the Azores in red, blue, and gold.

The other famous feature of the map is the depiction of Mansa Musa, ruler of the Malian Empire and one of the wealthiest people in history who made a historic hajj to Mecca in 1324. Enthroned at the bottom of the page with a golden crown, scepter, and orb, he is described in the accompanying text as “…the richest and the noblest sovereign of all this region because of the abundance of gold that comes out of the land”. 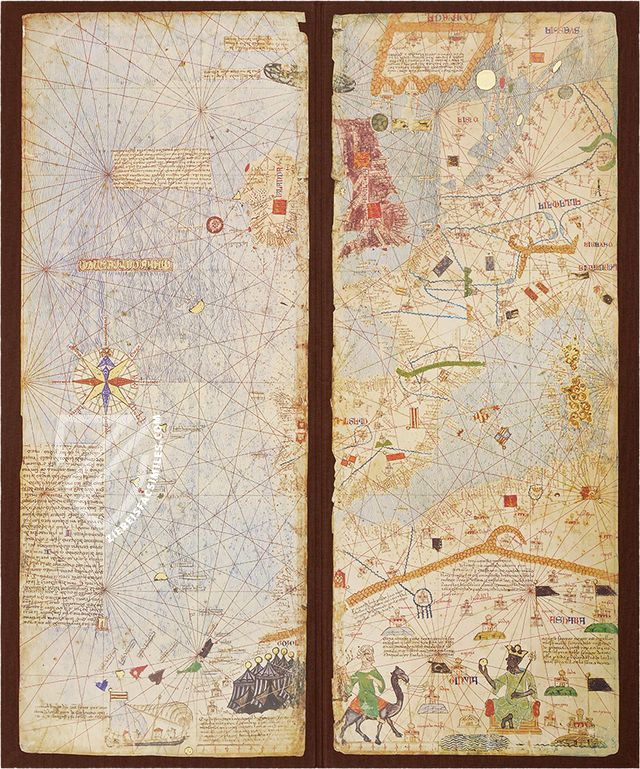 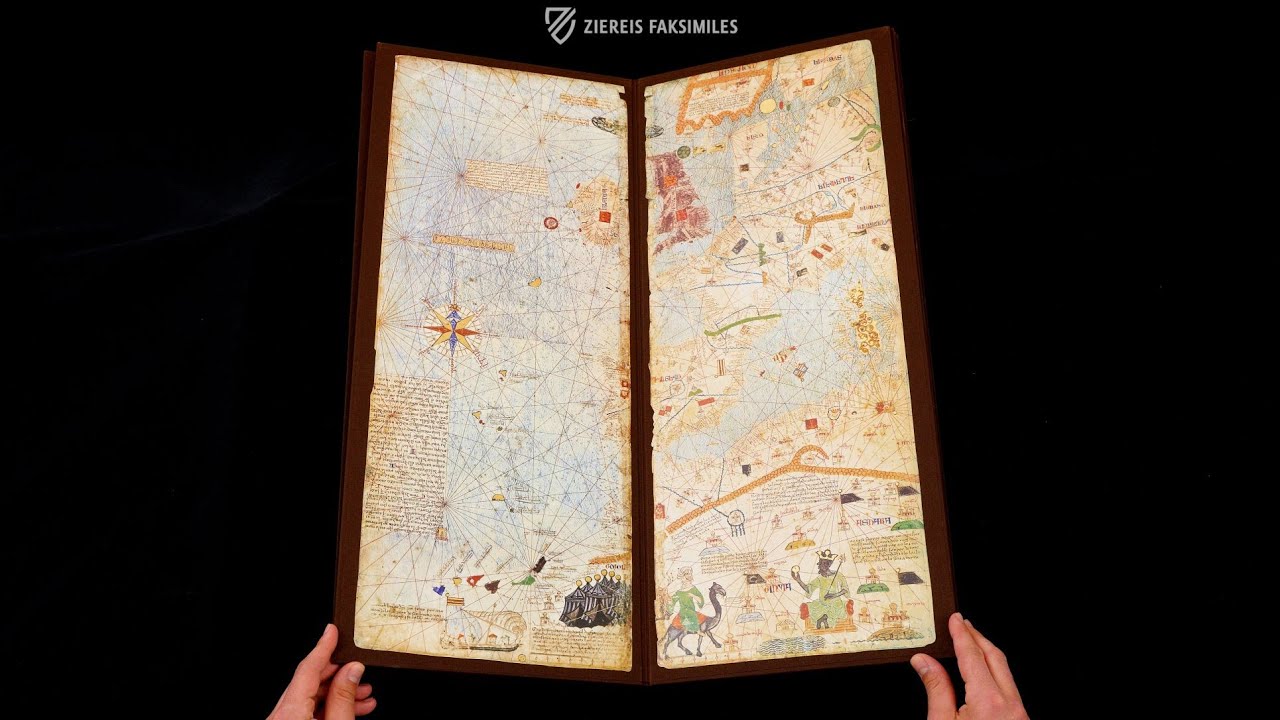 Binding: Mounted on linen, together with commentary in cassette
Commentary: 1 volume by Gabriel Llompart i Moragues, Ramón J. Pujades and Julio Samsó
1 volume: Exact reproduction of the original document (extent, color and size) Reproduction of the entire original document as detailed as possible (scope, format, colors). The binding may not correspond to the original or current document binding.
Price Category: €€ (1,000€ - 3,000€)
Edition available
Price: Login here!
Order / Ask a Question
Blog articles worth reading