The so-called Chansonnier cordiforme – the heart-shaped hymnbook – is one of the most exceptional manuscript to be produced in Europe during the Middle Ages because of its shape. The masterpiece was commissioned by the French noble and Bishop Jean de Montchenu sometime between 1460 and 1477. It contains love songs in French and Italian, which were written by the most important composers of the 15th century. The unbelievably precious illumination of the codex is just as charming as its outer form.

The gorgeous, heart-shaped hymnbook once belonging to the French nobleman Jean de Montchenu is counted among the most exciting and precious manuscripts to be created in the Middle Ages. The work contains 44 polyphonic chants in French and Italian, which were composed by the most famous musicians of the Middle Ages – Guilliaume Dufay, Johannes Ockeghem, and Antoine Busnois inter alia. The precious codex attained worldwide fame particularly because of its unusual shape. The closed book takes the form of a heart, which splits into two hearts when opened. Consistent with its design, the text of the work’s lyrics deal with love, in particular the love affairs of the French court during the lifetime of its patron. The richly designed book pages contain colorful illuminations, gilded initials, and lavish bordures with fantastic animal and plant patterns.

Love at the French Court

The canon Jean de Montchenu was a nobleman in 15th century France. There is very little reliable information concerning the cleric’s life today. It is known, however, that he was bishop of the parishes of Agen and Vivier in 1477 and 1478, respectively. Montchenu had the reputation of being an advocate of romantic love between people at the French royal court. Consistent with his personality, the nobleman commissioned his heart-shaped hymnbook with medieval French and Italian love songs between 1460 and 1477. It was written and charmingly illuminated by unbelievably talented, but nonetheless unknown artists. From its patron Montchenu, the Chansonnier passed through various hands before coming into the possession of the Rothschild family **, more precisely, the private library of the youngest son of **James de Rothschild, Henri. In a ceremonial act, the masterful work was presented to the French National Library by Henri de Rothschild on March 22nd, 1933.

The Chansonnier opens up like a butterfly consisting of two interconnected hearts. Both of the hearts represent two loving people who send messages of love to one another with the help of the songs contained in the book. The work is the only medieval manuscript worldwide to boast such a well thought out design concept. The word “heart” was replaced with a pictogram in the lyrics. It is not only the outer form of the songbook that makes it a unique masterpiece, but also its unbelievably rich illumination. It is undoubtedly counted among the most beautiful and elaborate manuscripts produced during the Middle Ages.

The manuscript, furnished all over with colorful and golden embellishments, contains two breathtaking, full-page miniatures. The first image shows Cupid, the angel of love, and a young woman whose breast bears one of the angel’s arrows. The goddess Fortuna is found alongside Cupid and is depicted spinning her wheel of fortune. The other miniature shows the same young woman, this time depicted arm in arm with her sweetheart. Both images are framed by fantastic bordure patterns from all kinds of flowers and plants, birds, dogs, cats, and other creatures. These charming depictions surround practically every page of the parchment manuscript. The manuscript was also generously furnished with letters made of noble gold leaf. 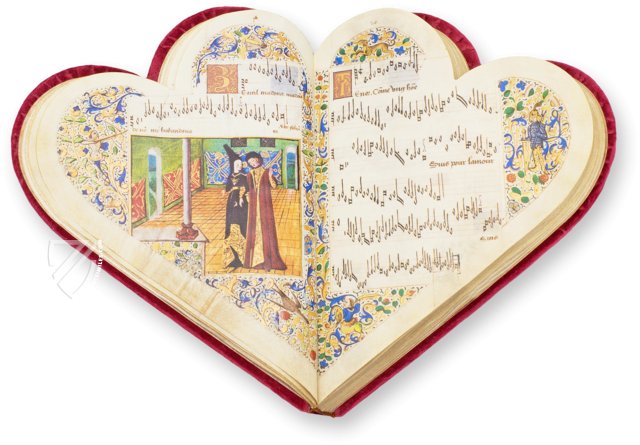 Pictured in conversation and strolling arm-in-arm, these two pink-cheeked aristocrats are dressed in the high fashion of the late medieval court. Their flowing, luxurious garments hang down to the floor and are adorned with gold brocade on his sleeves and her dress. The tiled floor has been used by the artist to create a realistic sense of depth and spatiality, and the raised column makes it appear as though the two are about to step through the doorway and out from the page. 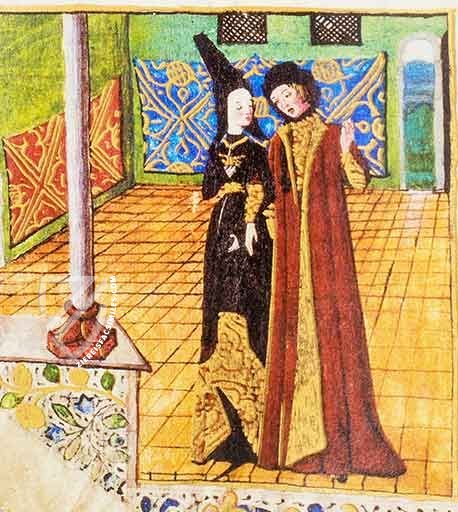 Fortune on its Wheel

Despite its unusual shape, this frontispiece is masterfully designed and richly adorned with gold. The miniature depicts fortune personified as a woman half in light and half in shadow, standing on her iconic wheel. Below her, the coat of arms of Jean de Montchenu, who commissioned this unusual manuscript, is upheld by two angels, despite his debauched reputation.

Inhabiting the planet Venus, Cupid fires an arrow into the breast of the elegantly clad woman to the right. She wears a long red skirt with gold brocade, overlapped by a black dress and topped by an elongated hat with a veil, through which one can see the gilded trees behind her. She is a typical representative of the fashion among noble ladies in late 15th century France. 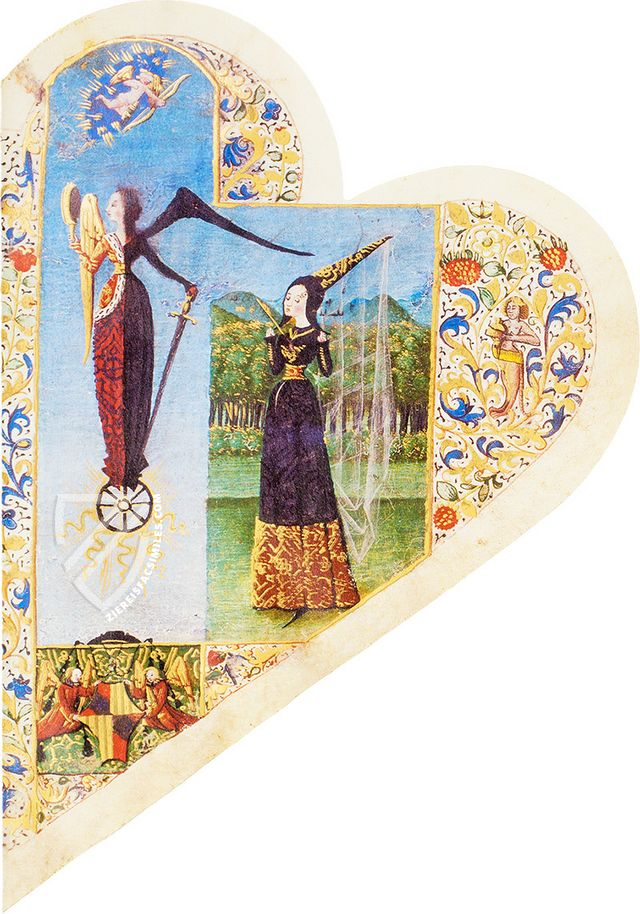 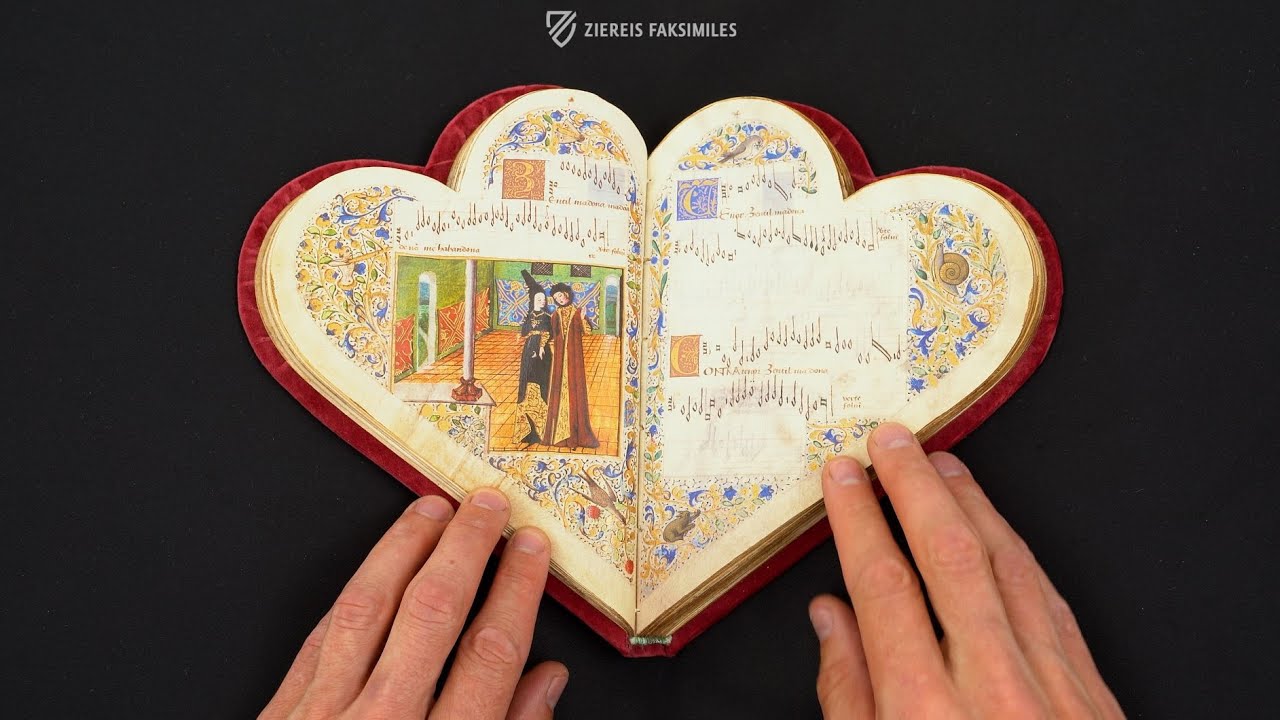 A gift for King Henry VIII, one of the greatest patrons of Renaissance music

Age-old songs from Benediktbeuern: a unique masterpiece of music and poetry from the Middle Ages