Codex Bonifatianus II is an early religious codex that, according to tradition, was used by Saint Boniface at the time of his martyrdom to ward off the swords and axes of the Frisians who killed him on June 5th, 754 near Dokkum, Friesland. The “saint’s shield” bears deep cuts to the original binding and pages. It is thus considered to be a contact relic – a physical object that has gained the status of a relic due to its contact with the body of a holy figure. It is also known as the Ragyndrudis Codex because an inscription on folio 2v states "in honor of our Lord Jesus Christ, I Ragyndrudis arranged this book". The manuscript is not a Gospel Book but instead represents a collection of texts on exegesis, apologia, and dogma. It is counted among a group of three manuscripts believed to have been in the personal possession of Saint Boniface, all of which are housed in Fulda, Germany today.

Saint Boniface claims was a famous Anglo-Saxon missionary who was one of the most important figures for the founding of the Catholic Church in Germany, for which he became known as the “Apostle to the Germans”. According to a 10th century vita written in Utrecht, the saint held a Gospel Book over his head for protection against the swords and axes of the pagan Frisians when he was martyred. The manuscript in question was not actually a Gospel Book but a collection of religious texts useful for his missionary activities and evidence of a nail having been driven through the book points to it being nailed to a tree in an Anti-Christian, pagan German ritual. Nonetheless, the codex known alternatively as Codex Bonifatianus II or the Ragyndrudis Codex served as the saint’s shield and has the status of a contact relic, which is a highlight of the Fulda Cathedral treasury today.

The Life of Saint Boniface

Born ca. 675 in Crediton, England, Boniface was a missionary, reformer of the Frankish church, and one of the key figures in creating the alliance between the papacy and Carolingian dynasty. Many of the dioceses founded or proposed by him still exist today and he is regarded as a unifier of Europe because of his missionary activity. Modern German Catholics consider him to be a patron saint alongside the Archangel Michael and he was declared the patron saint of Devon, the English county where he was born, in 2019. The most dramatic event of his missionary activities was felling the Donar Oak, a scared tree in German paganism that was knocked over by a great wind after he began to cut it down with an axe, causing the locals to convert to Christianity. Decades later in 574 (on the morning of the 5th of June according to tradition), the septuagenarian missionary was killed along with his company of around 50 in Frisia. Their assailants were disappointed to find their chests were not filled with gold and silver but books, which they largely destroyed in anger. This scarred manuscript was supposedly one of only three to be recovered from the site of the massacre. Boniface’s remains were first moved to Utrecht, then Mainz, and finally Fulda where he remains entombed today.

Researchers have been greatly aided by the fact that this is one of the rare medieval manuscripts that was signed by its author, which in this case by someone with the fairly cumbersome name of Ragyndrudis. Unfortunately, they have never been successfully identified, but a laywoman named Ragyndrugis who was connected through marriage to the Abbey of Saint Bertin in Saint-Omer, France has been hypothesized as a likely candidate. The text is written in a minuscule derived from Luxeuil Abbey during the late-7th or early-8th century and there are also glosses from the 8th century written in an Anglo-Saxon hand. This may indicate that the manuscript originated in Corbie Abbey in Picardy, Northern France, which was founded by monks from Luxeuil and had scribes from the British Isles who worked alongside their colleagues from the continent. Altogether, the manuscript contains 14 texts pertaining to exegesis, apologia, and dogma that include works by Ambrose of Milan and Isidore of Seville. Parzellers Buchverlag – Fulda, 1994
Publisher: Parzellers Buchverlag – Fulda, 1994
Limited Edition: 500 copies
Commentary: 1 volume by Lutz E. Padberg and Hans-Walter Stork
Language: German
1 volume: This facsimile is not complete. Reproduction of ff. 98/99 and 116/117 of the original document as detailed as possible (scope, format, colors). The binding may not correspond to the original or current document binding.
Price Category: € (under 1,000€)
Edition available
Price: Log in here!
Order / Ask a Question
You might also be interested in: 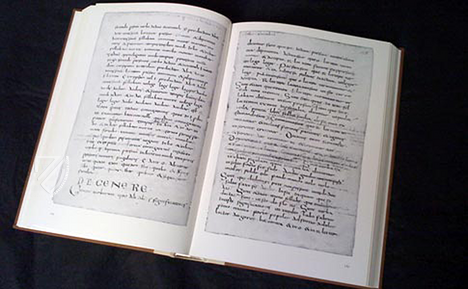 Written by students of the famous Court School in Aachen: a rare glimpse into the far-reaching educational reforms of Emperor Charlemagne and the foundations of Carolingian book art 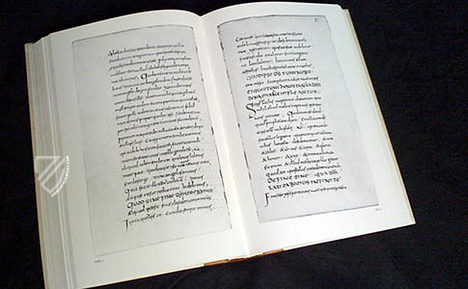