The Spanish brought manuscript production with them to the "New World" and the handwritten accounts of the explorers, administrators, and priests there were valuable sources of information. Codex Vaticanus A (3738) is divided into cosmological, mythological, and ethnographical sections but has a uniformity that is likely the result of it originating from the hand of one author, the Dominican Pedro de los Rios. It is actually the rough draft of another manuscript and as such is even more valuable because it offers insight into the drafting of the document and the mind of the author.

This manuscript was created between 1570 and 1589, either in the highlands of Mexico or it may have already existed in Italy, similar to the case of the Paris Codex Telleriano Remensis; a copy of a joint original draft which Robert H. Barlow named the “Codex Huitzilopochtli”. While the Codex Telleriano Remensis clearly is written by several writers, the Codex Vaticanus 3738 contains only one style, however divided into cosmological, mythological, and ethnographical sections. The hypothetically collected manuscript served as a draft for the final work and it is this fact without a doubt which accounts for the great value of this manuscript. The seemingly well-known author, the Dominican Pedro de los Rios (who the Codex Rios is named after) is responsible for the Italian text from the original 101 folio European papers of the comprehensive manuscript Vaticanus A. 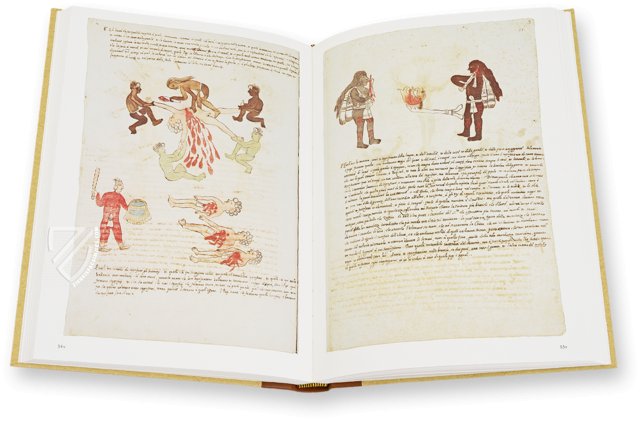 The image of the Zodiac Man has existed since classical antiquity and was popular throughout the Middle Ages and into the 17th century. It was referred to by physicians who looked to the movements of the heavens for guidance on when to perform procedures like bloodletting. Astrological signs were thus associated with different parts of the body and this diagram “translates” this system by attaching Aztec signs to parts of the body in place of the astrological signs assigned to them in Europe. 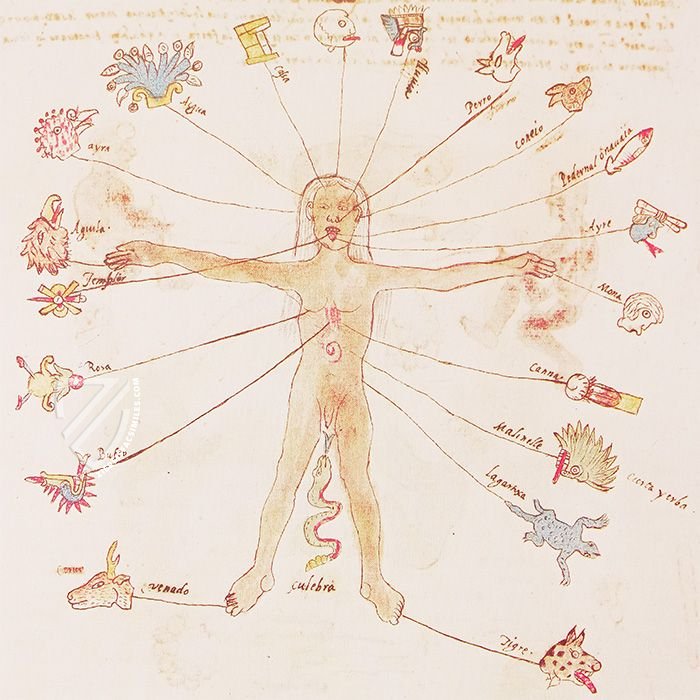 Pre-Columbian Mesoamerican calendars consist of 260 days divided into 20 “trecenas” or 13-day periods, with the word itself being derived from the Spanish for “a group of thirteen”. The red boxes at the top of the page contain 10 of the 13 day-signs associated with the fourth trecena of the Aztec calendar.

An image of Chalchiuhtlicue or "She of the Jade Skirt", an Aztec deity of water, rivers, seas, streams, storms, and baptism who was highly revered at the time of the Spanish conquest is featured in the center of the page. She is shown with tools for spinning and weaving. The figures swimming in the stream emanating from her dress could represent either offspring or those being carried away toward death – both are part of the same cycle. 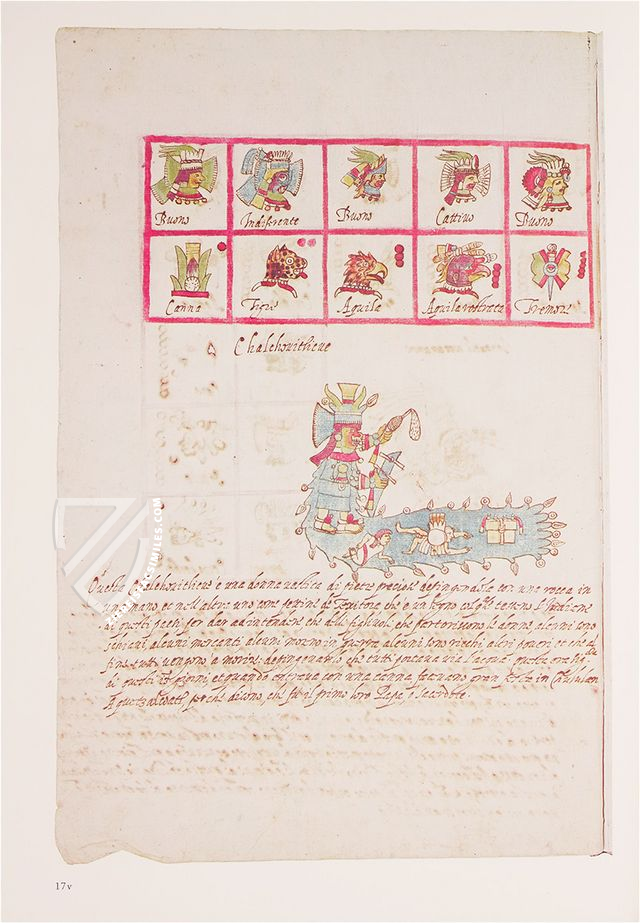 Akademische Druck- u. Verlagsanstalt (ADEVA) – Graz, 1979
Publisher: Akademische Druck- u. Verlagsanstalt (ADEVA) – Graz, 1979
Binding: Half leather binding.
Commentary: 1 volume
Languages: English, French, German, Spanish
1 volume: This facsimile is not complete. Color facsimile, reproduced to 7/10s of the original size. Reproduction of the entire original document as detailed as possible (scope, format, colors). The binding may not correspond to the original or current document binding. In order to reduce costs the reproduced facsimile had to be reduced in size from that of the original manuscript format ( ca. 46.5 x 29.5 – folios are not all the same size) and therefore because the facsimile is not in accordance to the original down to the smallest detail, it cannot by definition, serve as a pre-Columbian document.
Price Category: € (under 1,000€)
Edition available
Price: Log in here!
Order / Ask a Question
You might also be interested in: 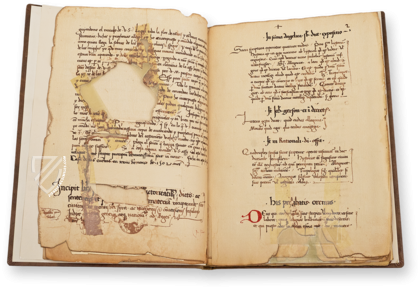 He believed in providence and mission from God: the "political-religious testament" of Christopher Columbus' with biblical passages collected and annotated by him