The so-called Consolat de Mar is the first comprehensive and universal rulebook that united the legal norms and customs of seafaring and maritime trade in the Mediterranean region. The most precious and beautiful edition of the widely disseminated and oft-reworked manuscript was made in Valencia in the year 1407 and today is considered to be the basis for our modern maritime law. It is furnished with splendid and diverse illuminations from the quill of the famous artist Domingo Crespie.

The El Llibre del Consolat de Mar, which can be translated as the “Book of Maritime Law”, is undoubtedly one of the most historically influential manuscripts to be written during the 13th century. This special codex is a reference work for maritime law, which regulated maritime trade in the Mediterranean region over the centuries. The work was composed in Valencia, translated into numerous languages, and forms the basis of our modern maritime law. The original rulebook has been copied countless times, expanded and sometimes furnished with gorgeous illustrations. The specimen at hand is perhaps the most magnificent edition of this important manuscript. The manuscript comprises 242 pages and is richly furnished with miniatures and marginal decorations with fantastic colors and ennobled with gold and silver.

The Origin of Maritime Law in Europe

The Consolat de Mar was the first book in the literary history of Europe that united the various, previously non-standardized maritime practices and customs into a comprehensive and universal rulebook. Its author collected the scattered laws and customs of seafaring and maritime trade as practiced by the Romans, Greeks, Byzantines, Italians, French, and Catalonians. As a result, the codex regulated trade in the entire Mediterranean region. The first edition of the work originated in Valencia between 1320 and 1330 and was composed by anonymous scribes, largely with the help of Latin written sources. An expanded and improved edition was made by the cartographer Huguet Borras from Mallorca and was published ca. 1345. The most exquisite handwritten specimen of the law book was created in Valencia in 1407.

The Consolat de Mar from 1407 is considered to be the most beautiful and precious edition from an art-historical perspective. Its text was composed by the scribe Jaume Gisbert and represents one of the most comprehensive and modern versions of the handbook. The world-famous and unbelievably talented illuminator Domingo Crespi furnished the work with breathtaking illustrations in the Gothic style of illumination. A few of the pages boast charming and splendid miniatures, which visually depict the expounded legal norms or illustrate noblemen and their retinue. Such depictions in manuscript normally provides details about those who commissioned them, but in the case of the Consolat de Mar, this has never been determined with certainty. Today, the original of the influential masterpiece is stored in the Archivo Histórico Municipal in Valencia and can be admired there by the public. 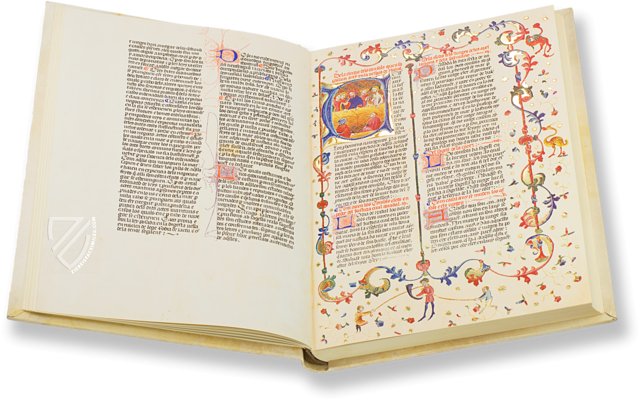 A fitting historiated initial for a text concerning maritime law: with its left pillar consisting of a blue fish, the ship constitutes the bar connecting the capitol letter in the middle. The ship sails through green waters with six figures on deck before a splendidly patterned background with diamonds and flowers. Despite its small size, the drawing of the ship is highly detailed, showing an aftercastle and a “crow’s nest” on top of the mast with rope ladders leading up to it. 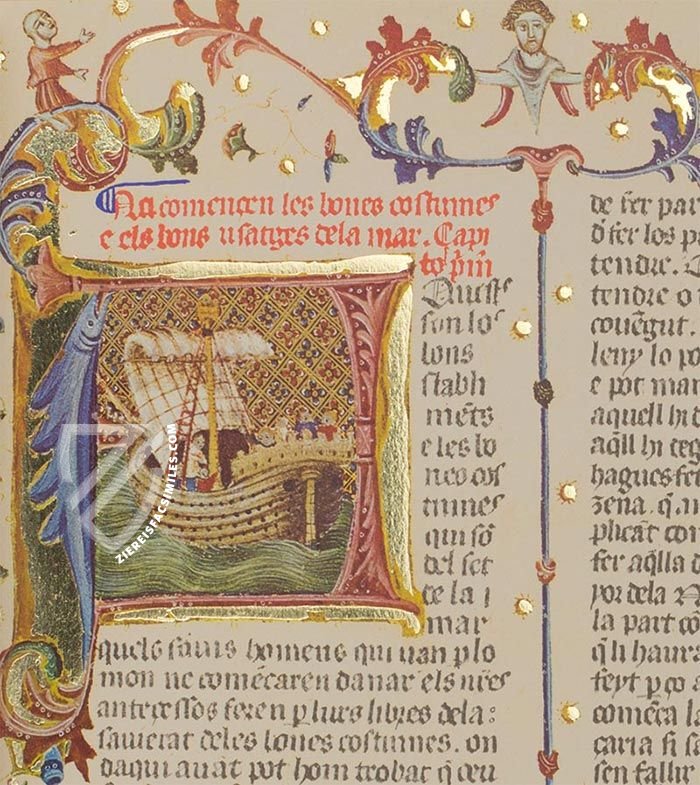 Portrait of a King

Rich pigments, glimmering gold leaf, and intricate patterns are some of the signs of a top-quality manuscripts, the kind that can usually be ascribed to a rich patron. As such, manuscripts often contain portraits of their patrons being presented the work, but this manuscript, despite the richness of its adornment, cannot be traced to the commission of any specific person and as such, this king remains anonymous.

The primary miniature at the top of the page shows the king’s throne mounted on a dais, covered by a baldachin, and surrounded by a bustling crowd of courtiers who are dressed in the fashions of the early–15th century. Additional figures, including two in a ship, fill the margins of the page among the colorful golden tendrils.