The socially-prestigious sport of fencing has existed since the 13th century and spread across all of Europe through the 16th century. Beginning in the 13th century, organized fencing schools, fencing societies, and fencing masters gained more and more significance as they taught and practiced their fighting techniques throughout the Holy Roman Empire. The German art of fencing was founded by Johannes Liechtenauer. The Gladitoria, a series of publications dealing extensively with Liechtenauer’s fencing techniques, were composed by means of his teachings, which were illustrated and concisely explained in charming image scenes. The Gladitoria are considered to be the most important source concerning medieval fencing.

Today, the Middle Ages are considered to be a dreary epoch of history. The plague, witch burning, brutal religious wars – for many people, all of these mark the epoch of the Middle Ages. It is often forgotten that many of today’s most highly-regarded activities have their origins in the Middle Ages. For example, fencing is directly connected with this historical period. This historic martial art with swords, which has been popular across Europe since the 13th century, is seen today as a prestigious sport. The rules thereof go back to fencing books that explained the martial art with the help of artful depictions. The Gladiatoria are a series of fencing books originating from the early 15th century and are illustrated in an exceptionally beautiful manner. They are considered to be the most important historical source concerning the great discipline of fencing.

The German Art of Fencing

The series Gladiatoria is comprised of six editions and was composed ca. 1430 in Early High German. Who exactly is responsible for the production of the work has not been verified to this day. The library of Jagiellonen University in Krakow, Poland, one of the oldest universities in Poland, has what is arguably the most beautiful edition of the fencing manuscripts. The illustrated depictions show fencing techniques as taught by Johannes Liechtenauer, a 14th century German fencing master.

The School of Johannes Liechtenauer

Johannes Liechtenauer is a central figure in the history of European sword fighting. Precious little information exists about the fencing master’s life. Liechtenauer, who was probably born in Middle Franconia, has been designated today as the founding father of the “German school” of fencing. This is a sport discipline comprised of fighting techniques with various edged weapons such as the dagger, dusack, and longsword as well as unarmed fighting techniques such as those based on wrestling. In the fencing book at hand, the techniques depicted are clearly influenced by the Liechtenauer School, it is possible that the text was even personally made by one of the master’s students.

Like the other editions of the Gladiatoria, this fencing book contains illustrations on almost every page. The depictions were accompanied by short explanations of the respectively pictured techniques. The hand-painted, colorful pictures show knights in armor of diverse designs fighting with various weapons. Realistic battle scenes playout here against vivid landscapes such as blooming fields under a light-blue sky. The gifted miniaturist who made the images furnished his scenes with banners of different colors, elaborate decoration of the armor, and shields flaunting escutcheons. The exciting, artful pictures also offer therewith a special charm for the reader who is not familiar with fencing.

Although rarely portrayed in artistic depictions of medieval warfare wherein everyone stands valiantly with swords in hand, Liechtenauer identified grappling and wrestling as fundamental skills for warriors learning the art of fencing. The two combatants shown here are covered with plate armor from head to toe. Their shields, spears, and longswords are discarded on the ground beside them. One has climbed on top of the other and goes for the kill by stabbing his dagger through his enemy’s visor. 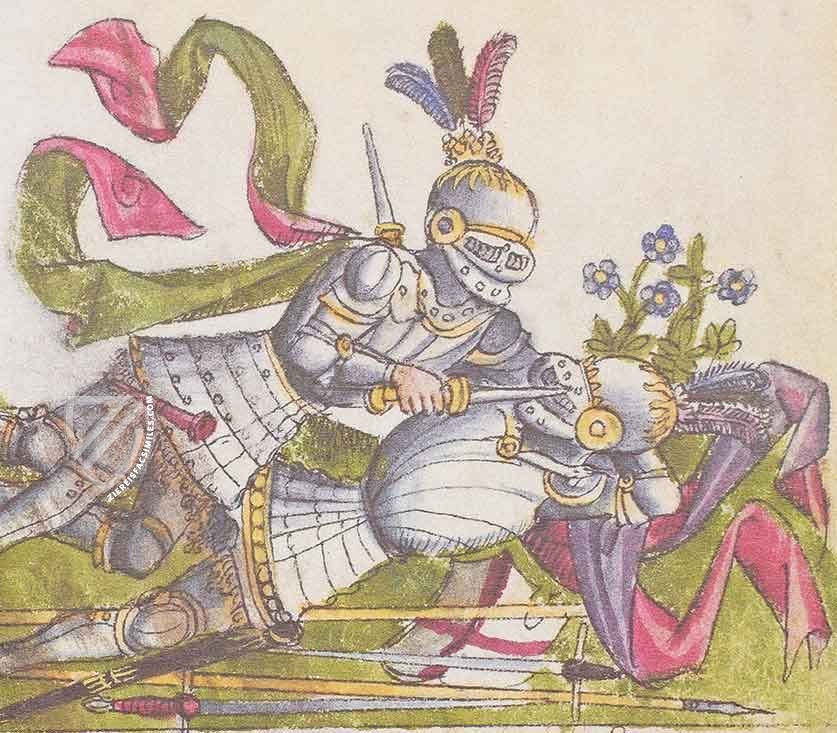 Battle on Foot in Full Armor with Dagger

This is a scene from the third series on combat techniques, which gives practical instructions on what to do when your primary weapons, in this case a spear and sword, are unavailable. Two men-at-arms in full plate armor with chain mail underneath grapple with one another and are embellished with flowing robes and gold leaf. Their discarded long arms and shields lay on the grass behind them.

The combatant on the right has drawn his dagger first. Rather than drawing his own dagger, his opponent has seized his forearm, twisted it, and is guiding the dagger away from him. At the same time, the combatant on the left has positioned his front foot behind his opponent’s, perhaps preparing to trip him and thrown him on the ground. 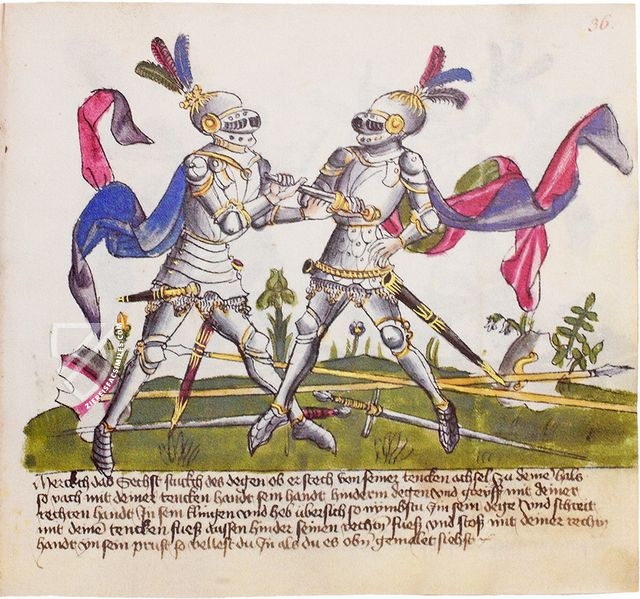