The Tournament Book of the Kraichgauer Knight Community documents the participation of the noble knights of Kraichgau in a total of 15 knights’ tournaments. The work arose ca. 1615 and contains 44 miniatures in the Baroque style. The colored pictures skillfully illustrate the noble coats of arms and special weapons and armor of the knights and others persons taking part in the tournament.

Courtly life in the Middle Ages was defined by festivities and sporting events. Knights’ tournaments were the biggest highlight among such events. In order to justify one’s participation at a tournament, one had to be able to verify a pure bloodline. This normally happened with the help of tournament books that documented the festive knights’ tournaments and also presented the aristocratic heritage of the participants. The Kraichgauer Tournament Book is an especially charming example. The 44 enclosed pen and ink drawings in watercolors illustrate 15 knightly contests in the time period from 938 to 1481.

The Noble Province of Kraichgau

In the Middle Ages a high-ranking noble family lived in the small location of Kraichgau in southwestern Germany. The male family members and their descendants regularly took part in knights’ tournaments, at the center of which stood the supreme discipline of the joust. In jousting, two knights in full armor and with blunted lances ride to left and right of a barrier, respectively, in order to unhorse their opponent through an aimed thrust with the lance, or at least to land a blow on the shield or helmet of the opponent. The privileged knights from Kraichgau were envisaged in the tournament book and the miniatures show the knights fully-armored and on their tournament horses.

The tournament book describes the historical events of 15 celebrated tournaments in the finest detail. The beholder is given a glimpse into the legendary contests by the outstanding miniatures, in which weapons, horses, and armor are represented. Before the description of each tournament one finds full-page portraits of the tournament organizers. These are followed by the coat of arms of the tournament’s judge. Finally the participating knights from Kraichgau are presented in colored, baroque miniatures. The illustrations, lovingly adorned in the finest detail, show various entities of heraldry and armor, which attest to the aristocratic heritage of the knights. 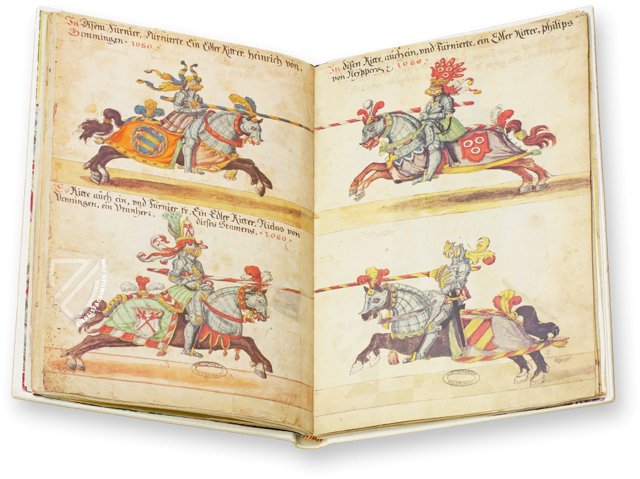 This member of the ancient Alemannic house of Gemmingen lived in the late-11th century, when heavy cavalry dominated the medieval battlefield. He is nonetheless depicted in the tournament armor of the early-17th century, when the affair was more of a parade than a martial exercise. The caption reads: “In this tournament, a noble knight, Heinrich von Gemmingen, jousted – 1080.” Heinrich is completely covered in plate armor and has his lance firmly couched under his arm. 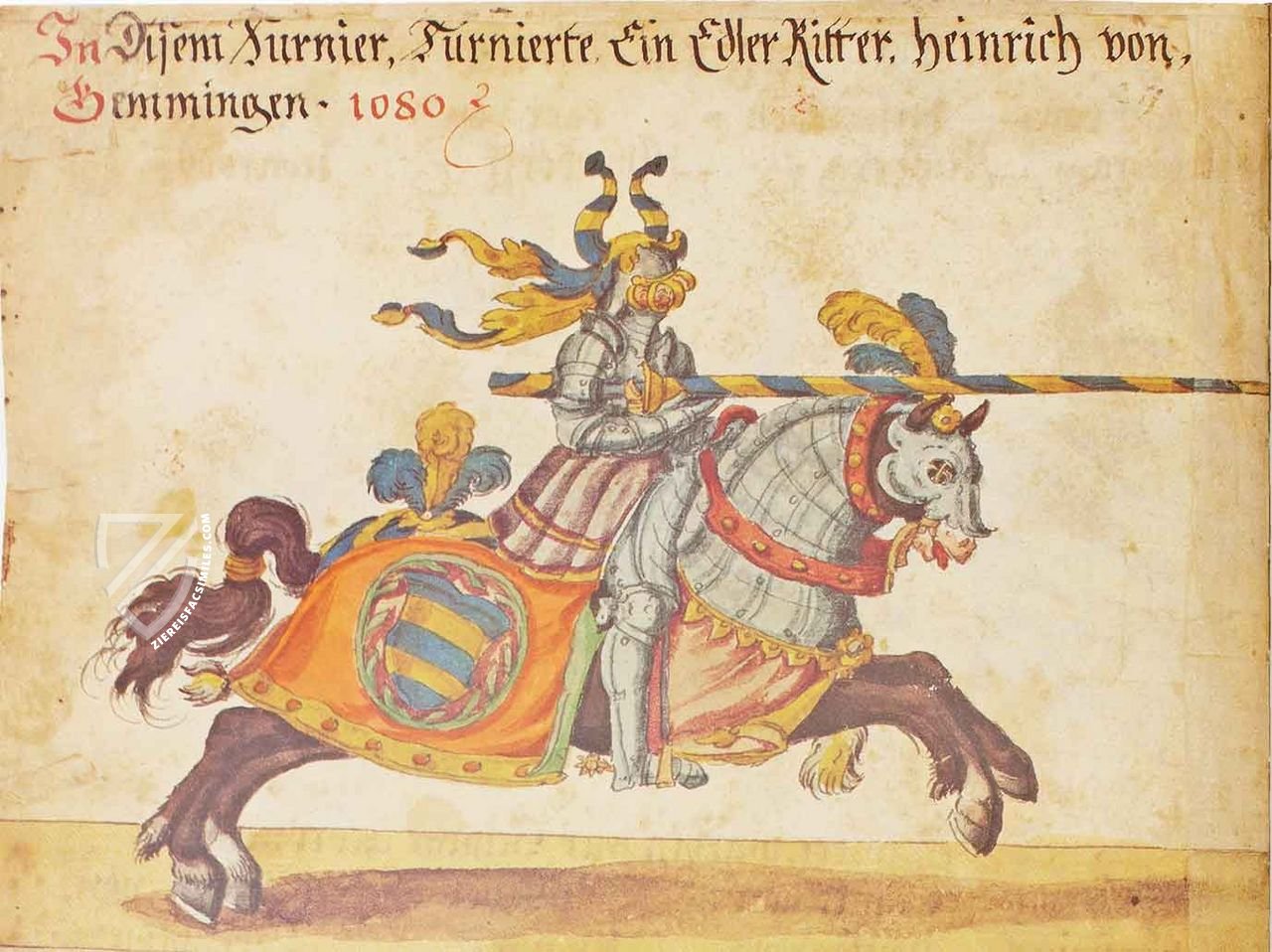 This splendid portrait is introduced by the following caption: “Ridack, Margrave of Meissen, Braŭe, and of Moritzburg, advertised a knights’ tournament, which was proclaimed throughout the 4 nations [of Germany]; this came to pass in his capital city of Moritzburg and was held in the year 968”. Despite having lived in the 10th century, Ridack/Rickdag is depicted in splendid plate armor.

Girt with a sword and holding the baton of command, the Margrave’s suit of armor features gilding inter alia on the cowters and poleyns. His cloak and cap both appear to be made of red velvet and adorned with jewels. The attention to detail is remarkable, from the figure’s facial hair to the shadows he and his shield cast upon the ground. 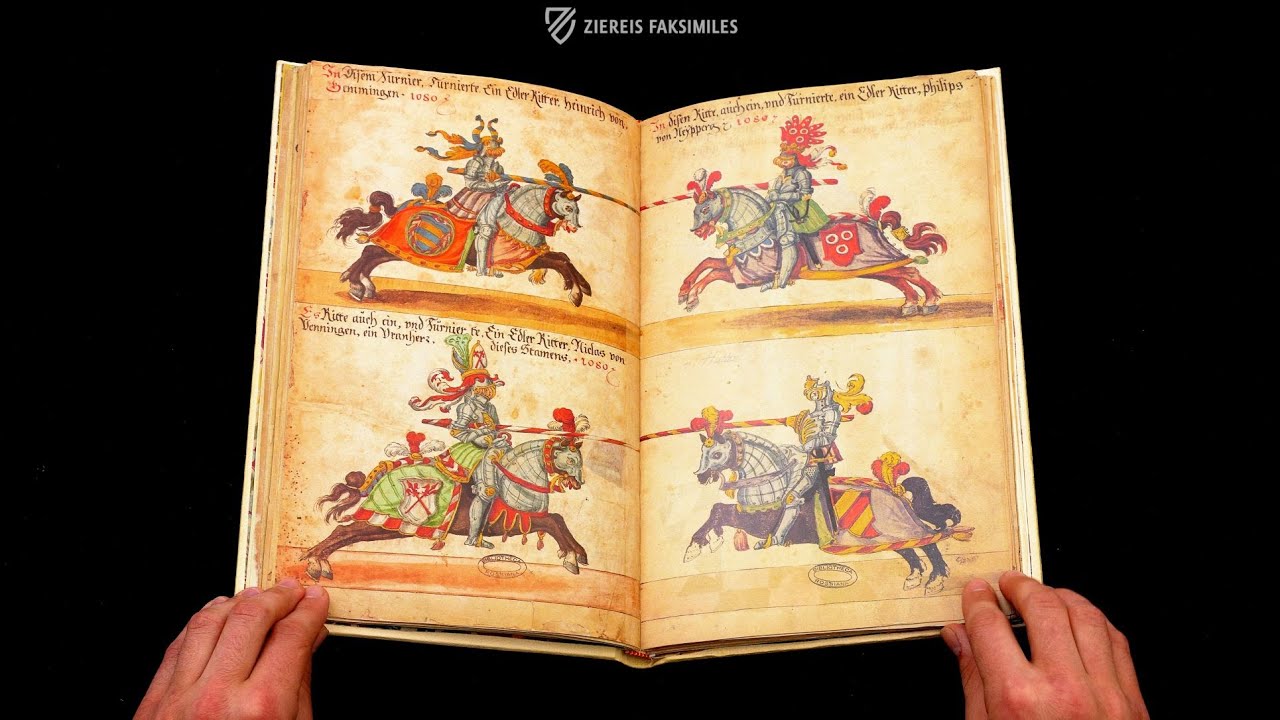 Publisher: Belser Verlag – Zurich, 1983
Binding: White leather
Commentary: 1 volume (110 pages) by Lotte Kurras
Language: German
1 volume: Exact reproduction of the original document (extent, color and size) Reproduction of the entire original document as detailed as possible (scope, format, colors). The binding may not correspond to the original or current document binding.
Price Category: € (under 1,000€)
Edition available
Price: Log in here!
Order / Ask a Question
You might also be interested in: 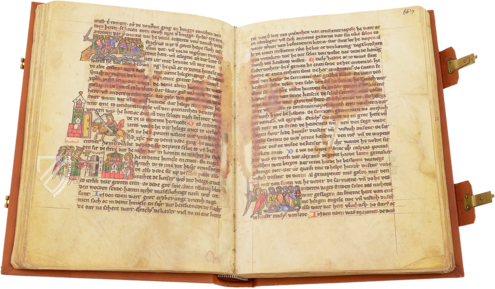 The "Golden Bull" of international maritime law, often with provisions still in force today: the first universally applicable treatise on the legal norms and customs of navigation and maritime commerce