The Gospels of Henry the Lion is ranked as the largest piece of work of the Romanesque illumination in northern Germany. It was commissioned by Duke Henry between 1175 and 1188 and was created by the monks in the Benedictine abbey of Helmarshausen. The 452-page comprehensive manuscript is illustrated with uncountable hand-written small and big letters and fifty masterful miniatures in intense colors and splendid sheet gold.

The Gospels of Henry the Lion

One of the most magnificent and most elaborately decorated books of the Middle Ages originated from approximately between 1175 and 1188 from the German Benedictine abbey of Helmarshausen. Duke Henry the Lion commissioned the literate monks of the abbey to create a evangeliary for Mary’s altar in St. Blaise’s parish church in Brunswick. This beautiful work is the main piece of the Romanesque illumination of the 12th century in northern Germany. The evangeliary contains the four gospels and reveals the history of Christianity in moving miniatures. Overall, the manuscript is 226 pages long with fifty full page miniatures, seventeen canon boards, four pictures of the evangelists, nine ornamental pages and twenty portrayals. The entire text includes approximately 1,500 small, 77 big, and seven large richly decorated initials.

On Commission of the Duke

Henry the Lion was one of the greatest rulers from the House of Guelph. Between 1142 and 1180 he was the Duke of Saxony as well as the Duke of Bavaria from 1156 to 1180. The foundation of today’s state capital Munich can be traced back to Henry. In his role as Duke of Saxony he had decisive part in the coronation of his cousin Fredrick Barbarossa. They had a good political relationship with each other until they fell out in 1176. The duke refused to pledge his military support to the king. This means that Henry has been seen for a long time as the most important protagonist of the Staufer-Guelph opposition. The religious duke was one of the richest and most powerful men of the twelfth century and was regarded as a great patron of art and literature. Among his numerous donations of liturgical manuscripts to churches and monasteries, the evangeliary for St. Blaise’s church is the most distinguished and most famous.

The much detailed but still unexplained history of the manuscript leads from Brunswick to Prague, where it lay for hundreds of years in the library of St. Vitus’ Cathedral. In 1861, the manuscript succeeded to be recovered on the order of King George V through Hannover from Prague to Lower Saxony. In 1866 however, it went with the then powerless Guelphs in exile to Austria. From 1933 to 1983 the whereabouts of the manuscript was unknown. It first returned to public view at auction in London in 1983. Since then, the interest in the manuscript has been unbroken. One of the creators of the work has signed the book at the front with: liber labor est Herimanni – Monk Hermann made this book.

The spellbinding evangeliary has impressed readers for many hundreds of years with its amazing book decorations. The numerous valuable pictures show a wide range of intense colors and are abundantly adorned with gold. The hand-painted scenes, which engage every reader, belong among the highest-quality illuminations of the Middle Ages. As well as depictions of Christian history there are also scenes that are dedicated to the customer of the valuable manuscript. One especially nice hand-painted full-page image depicts the coronation scene of Henry and his wife Mathilda, a daughter of King Henry II of England. Another scene shows the reigning couple being guided to an enthroned Maria and Henry offering her the evangeliary. The moving images enable their audience to dream and invite them on a journey into the spiritual world of the greatest rulers of gothic times. 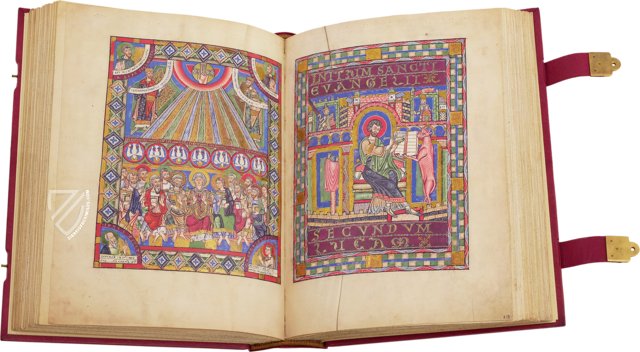 The so-called Maiestas Domini is one of the most popular images in Western Christian art. Modelled on depictions of the Roman emperor, Christ is always depicted enthroned and framed by a mandorla. Meaning “almond” in Italian, a mandorla is an almond-shaped frame in which Christ is presented, usually surrounded by other religious figures or icons. Christ is depicted before a blue sky full of stars, seated on the lower band of the mandorla while resting his back against the upper band. 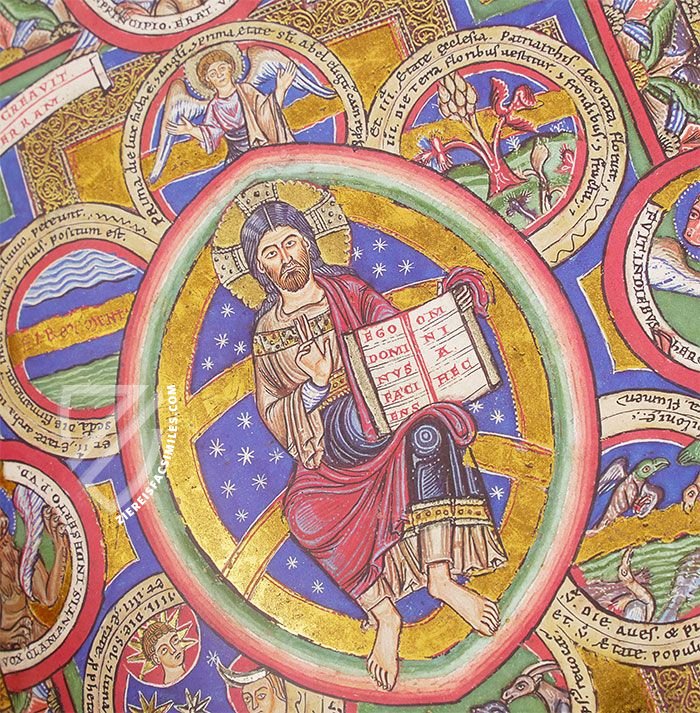 In the lower register, Henry the Lion and his wife Matilda of England are led to an enthroned Virgin Mary in the upper register by the saints Blasius and Aegidius. Henry offers the manuscript at hand to the Queen of Heaven, flanked by John the Baptist and St. Bartholomew. This masterpiece was created by the monks of Helmershausen Abbey at Henry’s behest as a gift to Brunswick Cathedral, dedicated to St. Blaise, to celebrate the consecration of a new altar in honor of the Virgin Mary.

This page, aside from being informative, is an exemplary specimen of the late-Romanesque art found in this splendid manuscript. It is distinguished by its intense opaque primary colors, which are highlighted with expertly applied gold and silver, especially the filigreed backgrounds. 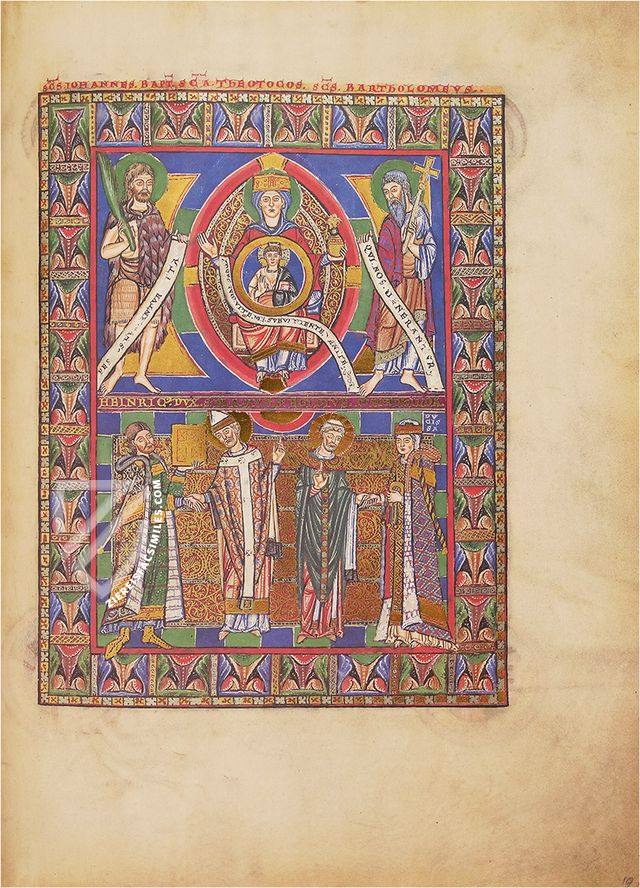 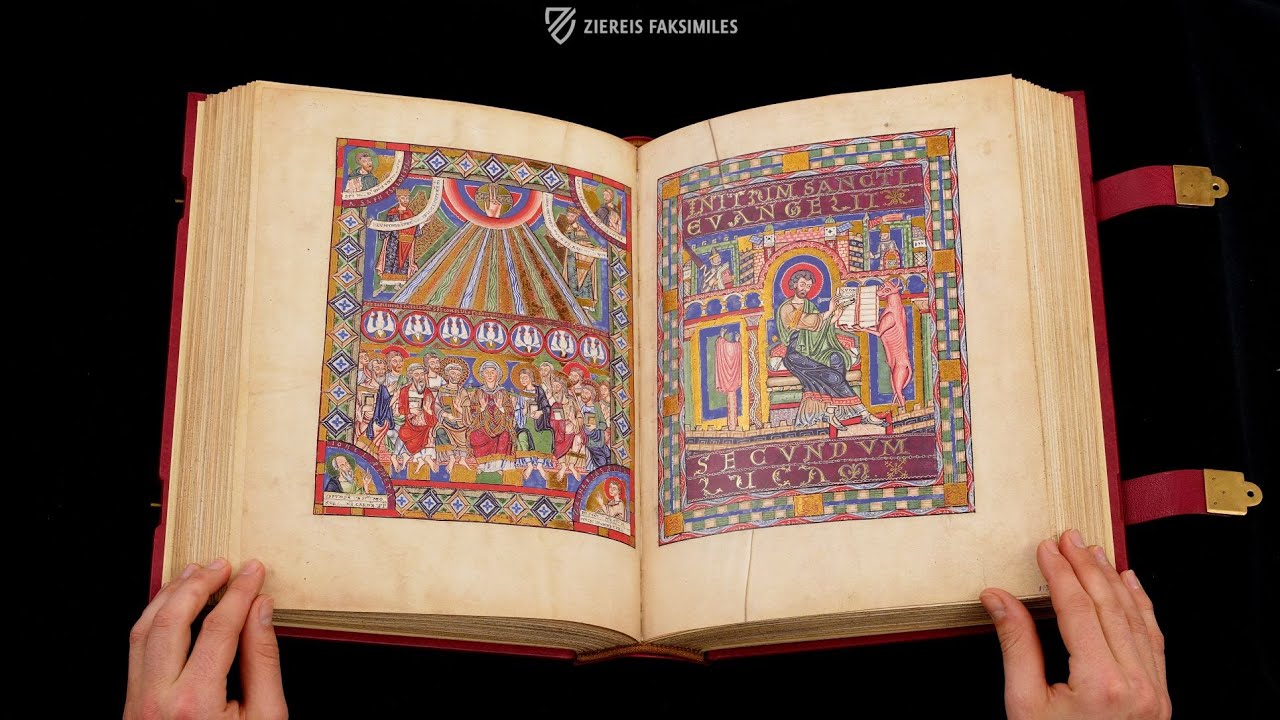 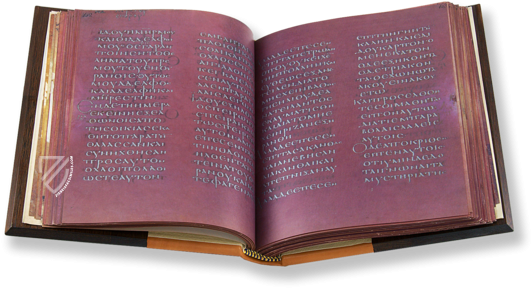 Containing the earliest portrait of an Evangelist in book illumination: one of the oldest surviving and most fascinating Gospel books in history on purple parchment