The Graduale – Notkeri Sequentiae is the oldest document of occidental music and originated in the scriptorium of Einsiedeln Abbey between 960 and 970. Still stored in the Benedictine monastery’s library today, it contains a completely preserved Mass antiphonary with neumes and various additions such as Hallelujah verses, Antiphons, and Psalm verses for the Communion Antiphons. The manuscript is adorned by initials illuminated in minium (lead tetroxide or red lead), gold, and silver. Since the mass antiphonary is complete, the manuscript is still important for Gregorian studies today. The second part of the codex contains the Libyer Ymnorum, the Sequences of the musician by poet Notker the Stammerer (also called Notker the Poet or Notker of St. Gall), written most likely for the third abbot of the cloister, Gregor the Englishman.

This 10th century manuscript has spent the entirety of its life in Einsiedeln Abbey, Switzerland where it is prized as the oldest complete surviving neumed mass antiphonary. Hundreds of decorative initials both large and small in minium (lead tetroxide or red lead), gold, and silver as well as dozens of incipits, including a full-page with text in gold ink and a purple-dyed background, adorn the graduals and sequences written by a single hand. After being damaged in a fire in 1577, it was restored and rebound at the behest of Abbot Ulrich III. Wittwiler (1585–1600) in 1597, when a new title page was added, and was rebound again in the 19th century. For the sake of creating facsimiles of the work, it was rebound twice more in 1991 and 2010, when it was furnished with a so-called conservation binding with two brass clasps. 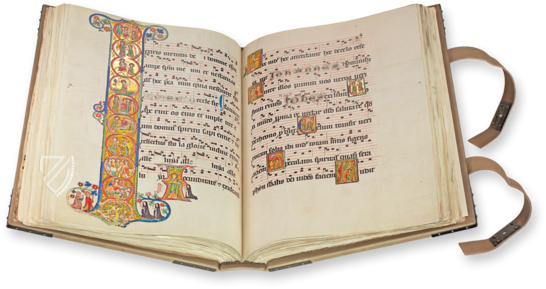 Formerly in the possession of Jean-Baptiste Colbert, Louis XIV's Minister of Finance: one of the finest examples of Aquitanian notation and of essential importance for the transmission of Gregorian chant