Johannes Gutenberg is, aside from the Reformer Martin Luther, the most important German whose name is associated with the transition from the Middle Ages to the modern era. Gutenberg is considered to be the inventor of book printing and the first published of literature worldwide. The famous Gutenberg Bible is the paradigm of the printing process developed by him and numbers today among the most important creations of world literature. A unique illuminated specimen of the Gutenberg Bible can be found today in the library of the Pelplin diocese in Poland. The precious work belongs among the earliest prints of the special Bible and was manufactured in Gutenberg’s Mainz workshop ca. 1453.

One specimen of the 180 printed and 48 surviving two-volume copies of the famous Gutenberg Bible is found in the seminary library of Pelplin in Poland. The valuable early printed book, also known as the Pelplin Bible, was printed between 1452 and 1453 in Gutenberg’s Mainz workshop. The handwritten template for the printed book was the so-called Vulgate, a 4th century translation of the books of the Old and New Testaments by St. Jerome. The Latin text was printed in a close line system on 541 hand decorated and illustrated sheets of paper. The illuminated Pelplin Bible is, just like every other surviving Gutenberg Bible, a gorgeous, high-quality unicum and an absolute treasure for every bibliophile.

Johannes Gutenberg is regarded as the inventor of modern book printing with moveable metal type and printing press. He was actually the first person who employed the invention of book printing in such a way that it unleashed a revolution in the availability and price of books. He was the first editor or publisher of literature worldwide. The paradigm of his publication method was his printed Bible. Credit is due Gutenberg in particular for having coalesced all of the components of the printing and reproduction of written text into an efficient production process, which facilitated the mechanical production of books for the first time. In the year 1997, Gutenberg’s printed Bible was voted Time-Life Magazine’s most important invention of the second millennium, and the Mainz native was named the “Man of the Millennium” in 1999 by the A&E Network.

The Pelplin Bible consists of two volumes, the first of which contains the Old Testament and the second the New Testament. The text pages are arranged in a uniform justification. The harmonious impression of the text pages is the result of the application of various broad letters, ligatures, and abbreviations. Gutenberg chose a particularly large font for his typeface, which is reminiscent of earlier, handwritten liturgical books. Consequently, the biblical text is also legible in low light and from a distance and was intended for use in church. The Bible was furnished with individually colored and gilded decorations and initials according the wishes of the owner subsequent to printing. The illustrators inserted colorful drawings, furnished the book pages with elaborate floral adornment and embellished free spaces around the text with realistic plant tendrils. The Pelplin Bible is a precious unicum like the other specimens of this work.

The Turbulent History of the Pelplin Bible

The Pelplin Bible is not merely special because of its unique illumination. The splendid work can look back on a fascinating trip through the entire world. A patron for the unbelievably costly and precious book has still not been established today. It is known that the book sat long in the Bernardine Monastery in Lubawa, Poland and from there came into the possession of the seminary library at Pelplin in the early 19th century. There it remained for a few decades, whereat it was falsely cataloged and titled in the library’s inventory. The error was first corrected by Paul Schwenke, a royal expert on early printed books, three years before the end of the century. The Pelplin Bible remained in exile for approximately 20 years during the Second World War. During this time, under circumstances straight out of a gripping war film, it left the country, initially going to Paris, then England, and finally across the Atlantic Ocean to Canada. After this turbulent period was over, the work finally returned to Pelplin and is the greatest treasure of the of the museum collection of the local diocese. 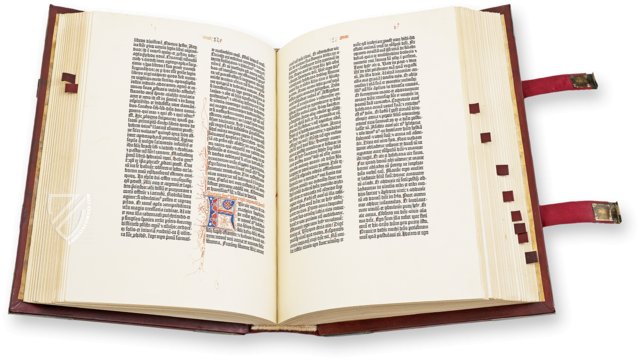 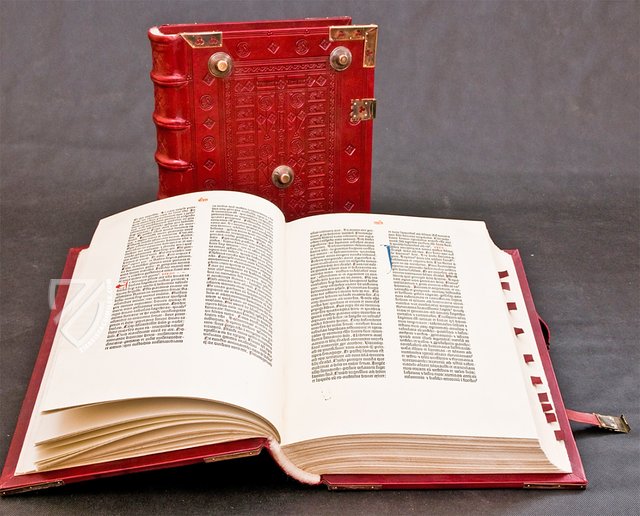 This style of initial was already widely popular in Gothic manuscripts before they were famously featured in many of the finest specimens of the Gutenberg Bible. They were drawn by pen in expensive and wonderfully contrasting red and blue inks. The first printed Bible was presented with blank spaces for initials and decorative marginalia to be added later by hand according to the patron’s own taste, something that had been seamlessly accomplished here with delicate pen strokes. 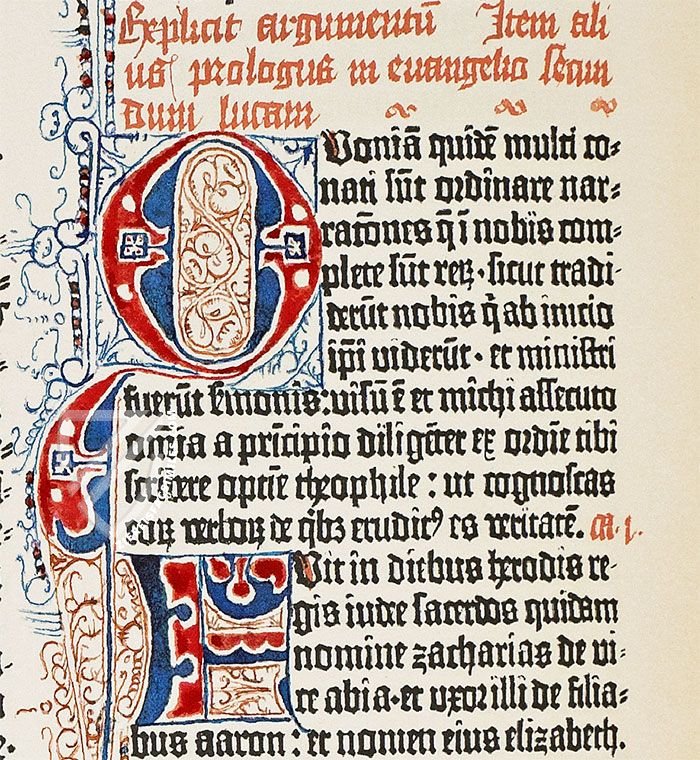 The Gutenberg Bible represents a hybrid work combining the new technology of the printed book with traditional illumination from manuscripts. Sometimes printed in red, the Latin text also left spaces for elaborate initials to be completed by hand. The patron of this codex had the opening page of the manuscript embellished with an initial in blue and gold ink featuring a fleur-de-lis.

St. Jerome’s Epistle 53 to Bishop Paulinus of Nola served as the preface to the Gutenberg Bible. Medieval Bibles often contained prologues, either preceding the Bible as a whole or an individual book, which were usually authored by St. Jerome. Their purpose was to both guide the reader and also explain the choices made by Jerome, who preferred Hebrew sources over Greek ones. 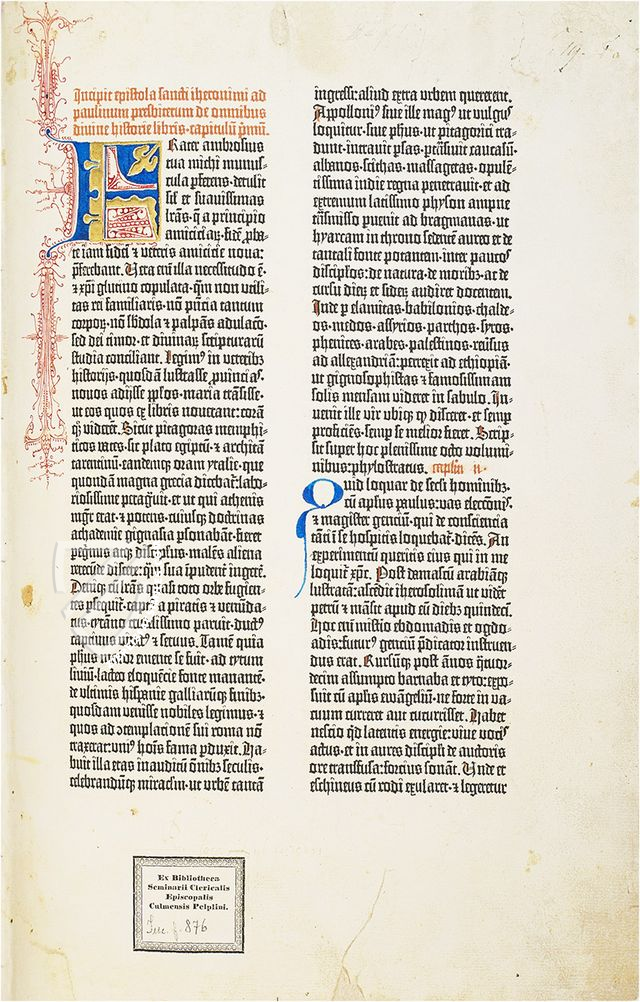 From one of the most famous copperplate engravers in history: 77 colorful pictures of the New Testament by Matthäus Merian the Elder