The Gynaeceum, sive Theatrum mulierum is a comprehensive catalog of female costumes from across Europe, which was created by the Swiss-German artist Jost Amman and the Flemish poet Franciscus Modius. Published in Frankfurt in 1586, the introduction states that it was dedicated “To the Most Serene Lady Isabella of Austria, Queen of France”. The term Gynaeceum comes from Ancient Greece and means the “part of the house reserved for women” or literally “of or belonging to women” and the work is part of the Theatrum genre of literature which consisted of encyclopedic works on various subjects. Although paternalistic in its treatment of women, the work is nonetheless a useful source on how European women dressed in the 16th century.

Although explicitly addressed to women, this moralizing work was written, edited, and illustrated by men. It is not a celebration of female beauty but rather interprets clothing as a sign of manners and presents women according to their status, rank, region, and country. Written by Franciscus Modius (1556–97) and Conrad Lautenbach (1534–95), the work was furnished with 122 woodcuts by Jost Amman (1539–91). Two versions of the work were published in 1586 by Sigmund Feyrabend (1528–90), one in Latin for a learned audience and the other in German for the wider public. Modius was responsible for the elegant, formally polished Latin text, which is presented here, while Lautenbach created the endearingly simple German text. Regardless of the language, it is an image-forward work that emphasizes its woodcuts over the text and thus presents an accurate depiction of women’s fashion in late-16th century Europe.

The preface of the Latin text presents a history of clothing beginning with the first fig leaves Adam and Eve used to hide their nakedness in the Garden of Eden after eating from the Tree of Knowledge. Drawing on theology, the author warns against the temptation of the Devil and recommends that pious women should attempt to please their husbands through opulence and splendor. Women are exhorted to be pure of heart, chaste, virtuous, modest, fear God, and to submit to manual and domestic labor. Respectable women thus need respectable clothing. As is common, the subjects are presented in descending order of rank and thus begins with an empress before moving onto queens, princesses, duchesses, etc. While this costume book is entertaining and shows what women wore during the period, above all it tells women how to behave and praises female conformity in the role of a demure, devoted wife and mother.

The Prolific Career of Jost Amman

Born the son of a professor of Classics and Logic in Zürich, Jost Amman was a well-educated artist who moved to Nuremberg in 1560, where accepted citizenship and spent the rest of his life. While in the unofficial capital of the German Renaissance, he was remarkably productive and is credited with creating about 1,500 prints. He was one of the last artists to produce woodcuts for books because they were beginning to be replaced by copperplate engravings. Although typically relying on a specialist Formschneider to cut the wood block with his drawing, he sometimes cut his own blocks, which is indicated by the presence of both a quill and a knife in the signature on his prints. This costume book was just one of numerous collaborations between Amman and Sigmund Feyrabend. Amman is remembered for his realistic and spirited drawings as well as his minute and accurate depiction of a garment’s details. Insel Verlag – Frankfurt, 1971
Publisher: Insel Verlag – Frankfurt, 1971
Commentary: 1 volume
Language: German
1 volume: Exact reproduction of the original document (extent, color and size) Reproduction of the entire original document as detailed as possible (scope, format, colors). The binding may not correspond to the original or current document binding.
Price Category: € (under 1,000€)
Edition available
Price: Log in here!
Order / Ask a Question
You might also be interested in: 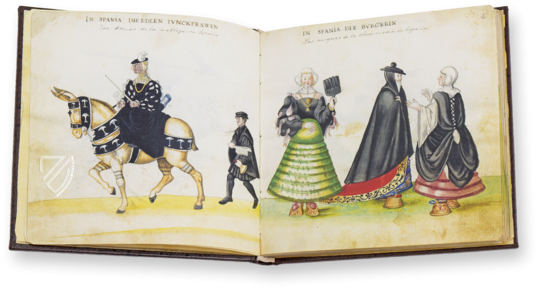 Created to illustrate his world empire to the Emperor: the many peoples of Emperor Charles V's vast world empire, upon which the sun never set, and their fashions 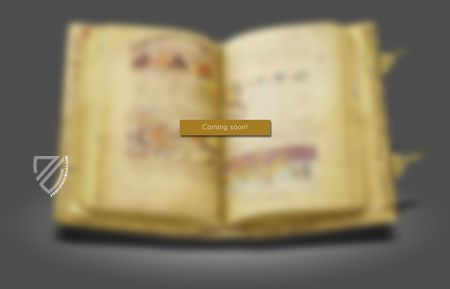 The first fashion catalog in European history: a tailor's workbook from 16th century Milan with depictions of models