Christine de Pizan was a widowed mother of three at the age of 25 and instead of remarrying or entering a nunnery, she used her extensive education to become a copyist and author in her own right and live independently. This made her the first professional laywoman of letters in Europe. Although she has a diverse body of work, she primarily wrote philosophical and moral texts regarding the role of women in society. The work at hand consists of a series of 100 fictitious letters from an ancient Goddess of Wisdom named Othea to the fifteen-year-old Trojan hero Hector, which instruct him on how to become a true knight. It is splendidly illustrated by 98 mostly half-page miniatures of the highest quality as well as artful bordures, leafy tendrils, and decorative initials. Artists from the circles of Barthélemy d’Eyck and Jean Fouquet as well as the Piccolomini Master used luminous colors, gold, and silver to create one of the finest French manuscripts from the late-Gothic period.

Courtly ladies, noble knights, monsters and animals, and exuberant flower tendrils – all of these combine to form the magnificent illuminated manuscript of the Othea-Letters of Christine de Pizan. As one of the most interesting female figures of the Middle Ages, she lived an unusual life and became the first independent female author of the Occident. Her famous work revolves around the fictitious letters of an ancient goddess, combining moral maxims with mythological tales. With its countless illustrations, the manuscript is counted among the most impressive works of French book art in the 15th century.

The foundation for the literary success of the author was the comprehensive humanist education that Christine de Pizan (1364 – ca. 1430) had received since childhood. Her father, a Venetian physician, astronomer, and astrologer, brought the four-year-old girl with him to the French royal court of Charles V in 1368. The court of the French king was a center of the arts, a melting pot of the most-gifted artists and biggest names of that time who were brought to Paris by art-loving nobles. This courtly environment shaped and influenced Christine de Pizan both in her lifestyle and mentality as well as her artistic work. Her particular connection with the sovereign environment is also pointed to by the fact that she dedicated all of her works to the King and his spouse Isabeau de Bavière and other high-ranking aristocrats such as Philip of Burgundy or Duke Jean de Berry.

A Significant Author and her Famous Work

Christine de Pizan not only attained a comprehensive education at the royal court, but also great popularity. As a mother of three, she was already widowed at age 25 and decided not to take the usual way of either a new marriage or entering a nunnery, but instead chose an unusually self-confident lifestyle for a 14th century woman. She made use of her literary education, her knowledge of both ancient and medieval authors and their works, her interest in literature, and was henceforth active as a copyist and eventually an author. Counted among her works are worldly and spiritual poetry, a biography of Charles V, a poem about Joan of Arc, autobiographical writings, and above all philosophical and moral texts, primarily regarding the theme of the role of women in society. Her Book of the City of Ladies (1404/5) is still known today. Nevertheless her Othea Letters from the year 1400 are especially famous and were already circulated widely in her lifetime. The illuminated manuscript from the Royal Library in the Haag combines these fictitious letters of an ancient Goddess of Wisdom named Othea with countless illustrations, the artistry of which astounds to this day. Othea gives the fifteen-year-old Trojan hero Hector 100 pieces of advice, the observance of which makes him a true knight: the One Hundred Images of Wisdom. Christine de Pizan originates her tale from mythological stories, such as the Trojan Epic Cycle or Ovid’s Metamorphoses. She gives advice on this basis for a virtuous life in a very successful educational guide.

An Overwhelming Wealth of Pictures

98 miniatures, mostly half-page, illustrate these One Hundred Images of Wisdom with mythological provenance. Both the image scenes as well as the artistic adornment of the manuscript with bordures, leafy tendrils, and initials bear witness to the great worth of the book. Luminous colors as well as bright gold and silver emphasize the fine painting of the miniatures. The artist, whose name and identity remain a mystery to this day, must have undoubtedly been one of the greats of his time. In scholarship, such famous names as Barthélemy d`Eyck, Jean Fouqet, or Guillaume Jouvenel des Ursins and his circle have been discussed. The unashamed adornment of the richly illustrated manuscript indicates a high-ranking commissioner, probably from the vicinity of the French court. 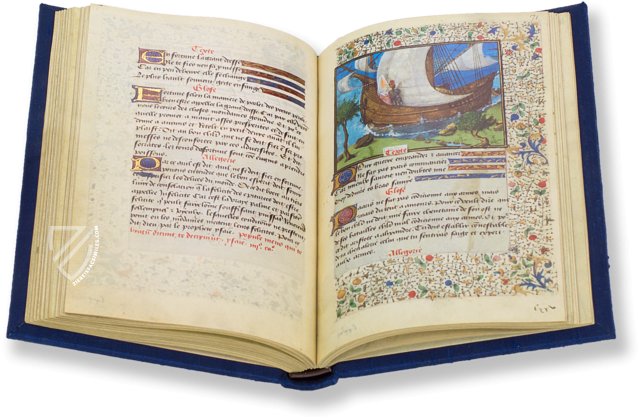 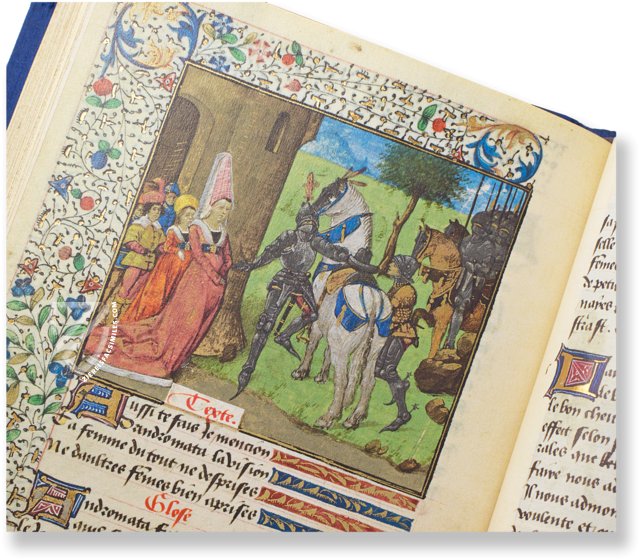 A typical medieval galley is shown sailing in this miniature with most of its sailors crowded onto the foredeck. Its broad planks are wonderfully highlighted by strokes of gold ink and the sea is shown foaming as the ship cuts through the water. They sail in a tranquil sea of turquoise as a bearded man appears in the sky, putting his hand on the mast and guiding the ship to safety. It is Neptune, God of the Sea, who Odysseus famously offended and thus earned the ancient Greek deity’s wrath. 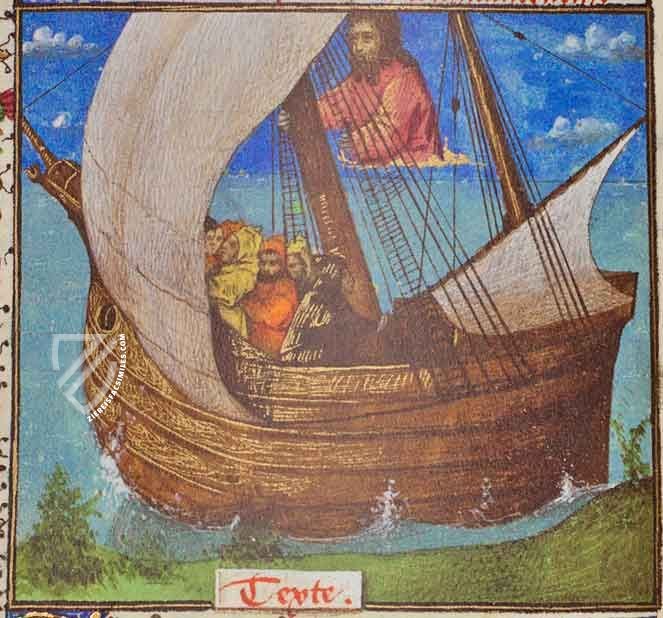 In the Odyssey, Odysseus and his companions flee the destruction of Troy and at one point come to the island of Aeaea, home of the goddess-sorceress Circe. She turns half of Odysseus’ crew into swine after feeding them a feast of drugged cheese and wine. With the help of Hermes, Odysseus is able to make Circe free his men.

Circe’s palace is described as being surrounded by strangely docile lions and wolves, who are the victims of her sorcery, one of whom is depicted standing behind Circe wearing yellow and blue. Although able to resist Circe’s magic, she subsequently seduces Odysseus, who spends a year feasting and drinking on the island, fathering two sons by her. Odysseus is thus depicted as the well-dressed young nobleman standing to Circe’s left. 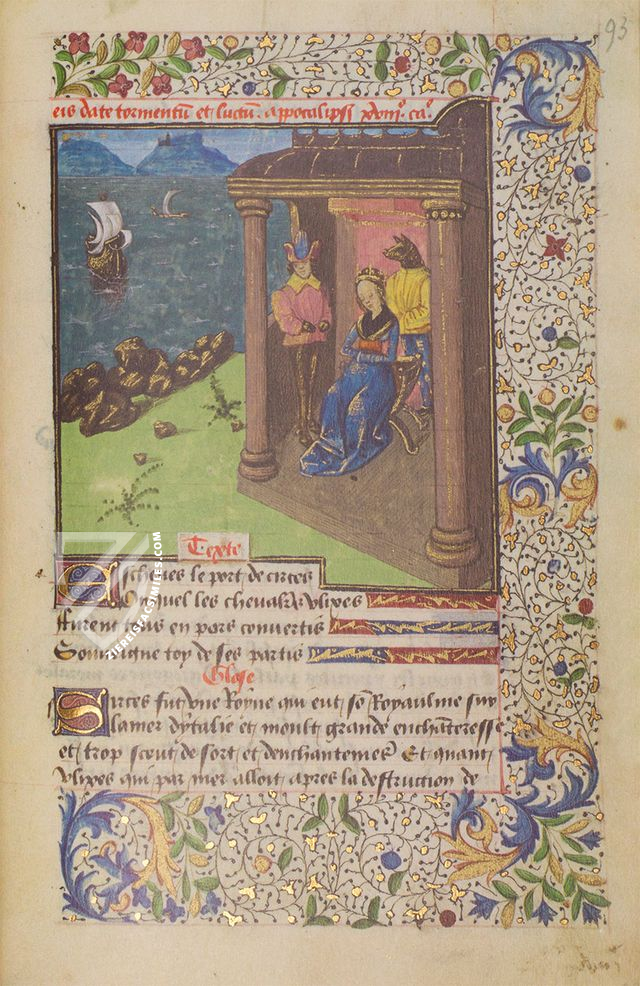 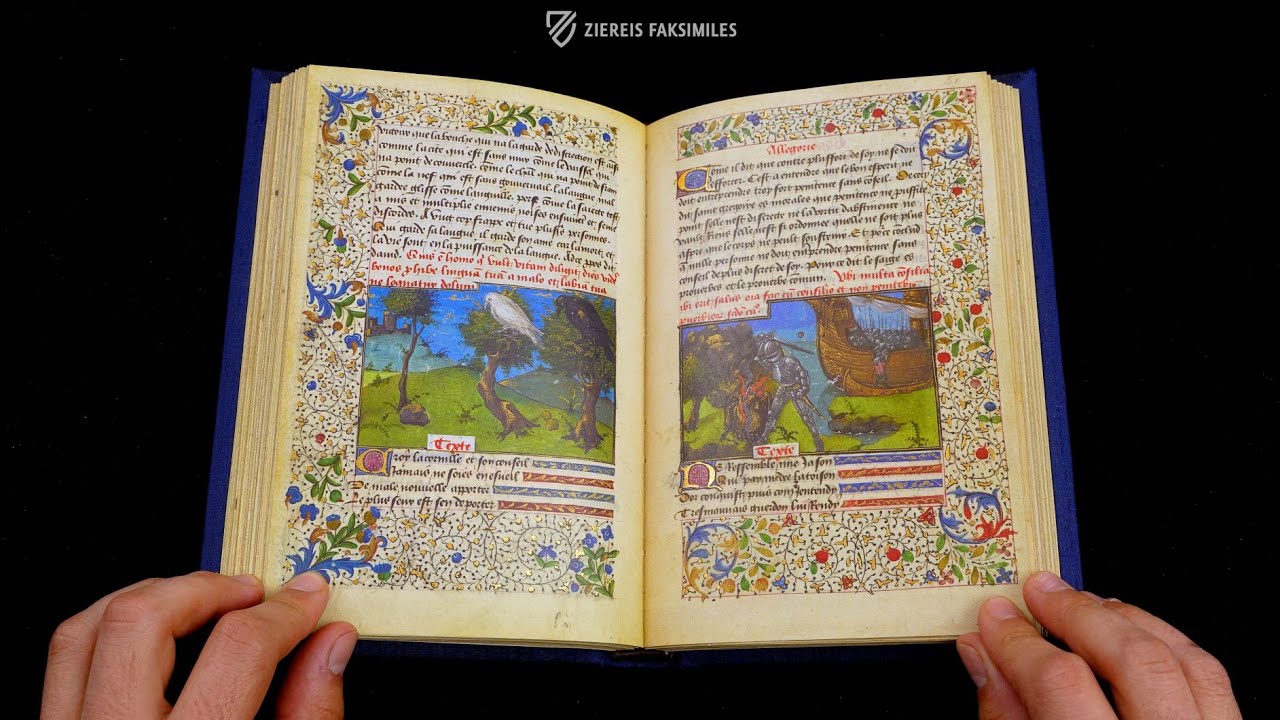 Publisher: Müller & Schindler – Simbach am Inn, 2009
Limited Edition: 990 copies
Binding: Blue raw silk in the style of the original 15th century binding of the book
Commentary: 1 volume by Eberhard König, Dieter Röschel, Robert Schindler, and Siegbert Himmelsbach
Language: German
1 volume: Exact reproduction of the original document (extent, color and size) Reproduction of the entire original document as detailed as possible (scope, format, colors). The binding may not correspond to the original or current document binding.
Regular price without login (like new)3,490 €
Log in for a Better Price!
Order / Ask a Question