The Hundeshagen Codex is the sole surviving illuminated manuscript of the Song of the Nibelungs and depicts the heroic epic first written ca. 1200 with a comprehensive image cycle. Named after Helfrich Bernhard Hundeshagen, the librarian who first acquired it in 1816 shortly after it was rediscovered, the manuscript is dated to ca. 1440 and is written in the East Swabian dialect. Its 37 pen and ink illustrations still have the power to delight and animate the national epic of the Germans to this day. The famous tale of heroism, intrigue, and betrayal has its roots in historic figures and events from the 5th and 6th centuries, but the masterful miniatures of this manuscript also give a vivid image of life among the German nobility in the first half of the 15th century. We are truly lucky that this unicum has not only survived in a complete state, but both its text and miniatures are obviously the work of very practiced hands.

The saga of Siegfried the dragon slayer was considered to be the German national epic in the 19th century. Only a single illuminated manuscript exists in Middle High German, namely the Hundeshagen Manuscript from ca. 1440. The heroic epic tells the story of Siegfried, who helps the Burgundian King Gunther return a wife home and as a reward is allowed to take the beautiful Kriemheld to wife. However his triumph does not last long, treason and intrigue lead to Siegfried’s death and endless calamities. The Hundeshagen Codex contains 384 pages with a total of 37 impressive pen and ink drawings that bring the well-known events to life.

A History Full of Open Questions

Whether or not this illuminated manuscript of the Nibelung Saga from the 15th century was the product of a commission has never been made certain. An author has been similarly sought in vain. Furthermore, nothing more can be said from which of the few previous transcripts still in existence the original version of the epic was based on. What is certain is that around 1200, elements of various Norse myths and real events of the migration period and the reign of the Merovingians were combined with one another to record the manuscript for the Huneshagen Codex, and out of it a massive heroic epic was created in Middle High German.

The Song of the Nibelungsfirst reached great fame centuries after its creation. In the Middle Ages the story made little impression next to masterworks such as Geoffrey Chaucer’s Canterbury Tales or the Divine Comedy of Dante. In the 18th and 19th centuries, the time of emerging German philology and national consciousness, researchers of the time discovered the historical worth of the text and turned it into a quintessential piece of German literature.

In Many Respects an Unusual Edition

A unique detail of the Hundeshagen Codex is the nexus of two plotlines that was undertaken. There are two different versions of the epic. In the first version the story ends with the words “that is the song of the Nibelung” and in the second version with “that is the misery of the Nibelung”. The work of the Hundeshagen edition combines the versions. The codex originates from around 1440 and was named after its owner, the librarian Helfrich Bernhard Hundeshagen. He allegedly acquired the work in 1816 from an antiquarian in Mainz, he disclosed little more about his purchase.

The decoration of the book is as excellent as its history is mysterious: 37 magnificent book paintings in the late medieval style, which are still splendid to this day decorate the script and constitute a comprehensive pictorial cycle in their own right. A talented miniature painter executed the pen and ink drawings with assured strokes and a loving attention to detail. He used no gold decoration for his pictures, but he was successful in delighting with a great variety of colors. Fascinating depictions of knightly and courtly festivals, tournaments, hunts, intimate glimpses of the royal bedchamber, and paintings of travelling companies on water and land take the beholder to the long bygone time of the Nibelungs. 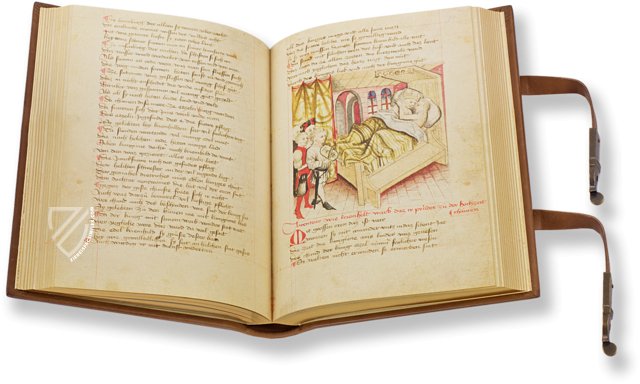 Siegfried as a Messenger in Worms

After conquering the kingdom of Nibelungenland, Siegfried leads one thousand of his new vassals back to Worms, a central setting in the heroic epic, in addition to his party of Burgundians, King Gunther, and Queen Brünhild of Iceland. He rides ahead of this host to deliver news of his success and the arrival of his party. Having crossed the drawbridge into the city over what is likely intended to be the Upper Rhine, Siegfried is shown in a blue hood handing over a message with two seals. 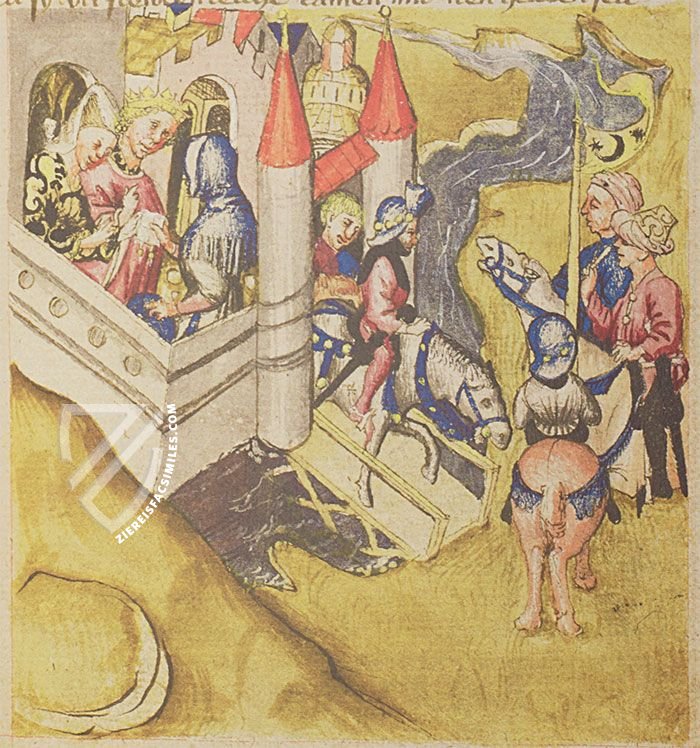 Kriemhild's Dream of the Falcon

This is the only surviving comprehensive picture cycle of the German national epic. In one of the first scenes, Kriemhild has a prophetic dream in which she sees a falcon killed by two eagles, portending the death of her future husband, Siegfried. Kriemhild's mother Ute is pictured standing at the foot of the bed.

The scene is framed by a Gothic doorway and is filled with details of a 15th century noblewoman’s bedchamber, including a bedpan. Ute wears the flowing robes typical for a contemporary German noblewoman, while Kriemhild sleeps in the nude, which was also typical. Another doorway leads into a room with a red/green column, creating a wonderful sense of perspective and spatiality within this deeply intimate room. 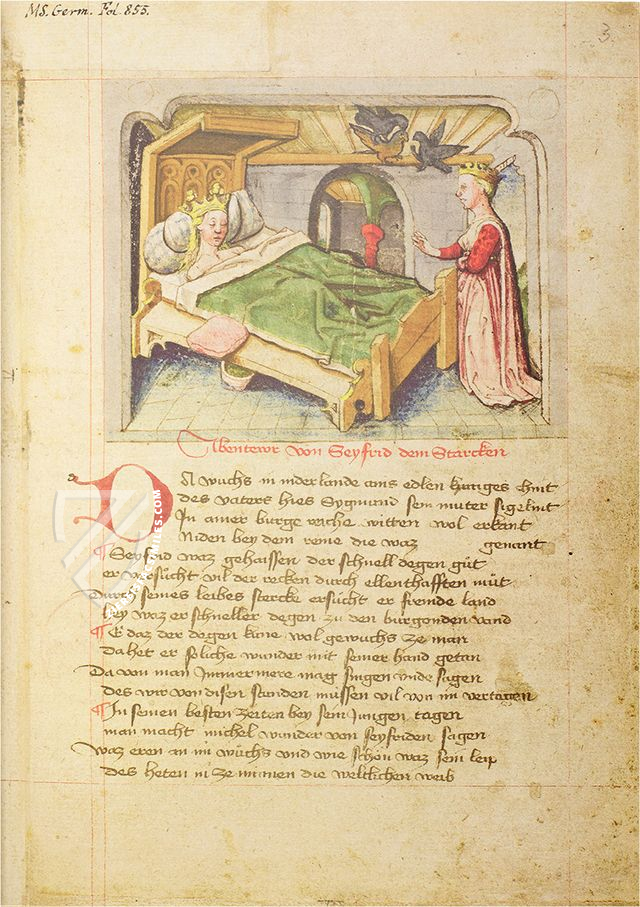 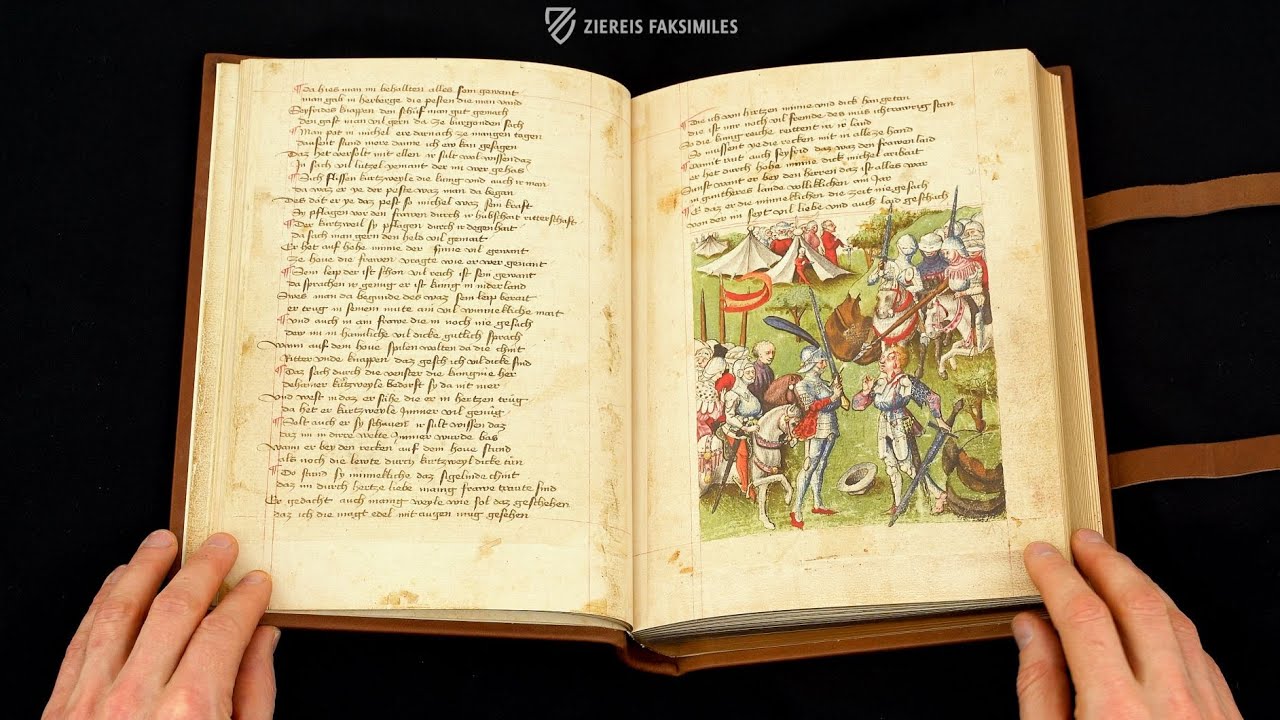 Publisher: Faksimile Verlag – Munich, 2012
Limited Edition: not limited
Binding: Based on an original fragment, the binding is wood covered with the finest brown cowhide. Blind embossing on the front and back as well as on the spine, with five brass studs, two catches with straps and gilt edging on three sides, complete the edition.
Commentary: 1 volume (184 pages) by Beate Braun-Niehr, Joachim Heinzle, Klaus Klein, and Jürgen Vorderstemann
Language: German
1 volume: Exact reproduction of the original document (extent, color and size) Reproduction of the entire original document as detailed as possible (scope, format, colors). The binding may not correspond to the original or current document binding.
Price Category: €€ (1,000€ - 3,000€)
Edition available
Price: Login here!
Order / Ask a Question
You might also be interested in: