With Der Welsche Gast, the Cleric Thomasin von Zerklaere (ca. 1186–1238) wrote the first book of etiquette in the German language ca. 1215/16. In the approximately 15,000 verses, he attempts to improve medieval society through education, upbringing, and guidance to virtuous behavior. A total of ten books give the reader both courtly and religious norms, which include, among other things, faithfulness in marriage and the duties of a good ruler. The edition of the Gotha Research Library, enriched with 120 miniatures, was created ca. 1340 and brings the world of thought in the Middle Ages back to life for today's readers. Battling knights, gambling men, animals, and angels romp on the sides, but even more unfriendly figures like the devil are also found.

Probably the most beautiful specimen of Der Welsche Gast is found in the Gotha Research Library. This poem comprising ca. 15,000 verses was composed by the cleric Thomasin von Zerklaere (1186–1238) ca. 1215/16 and is the oldest book of etiquette in the German language. Divided into ten books, it undertakes the attempt to improve society through education, upbringing, and guidance to virtuous behavior. Of prime importance here are values such as permanence, moderation, and generosity. All in all, the edition with 120 original miniatures of knights, animals and angels, which was made ca. 1340, illustrates the text for a better understanding.

A German Book of Etiquette from a North Italian Cleric

Much is not known to us today about the Romance-speaking Thomasin von Zerklaere (ca– 1186–1238) and his didactic poem. According to some information he wrote it in the winter of 1215/16 in just ten months. German was not the native language of the Northern Italian, who was well aware of his mistakes; he even apologizes to the reader for the linguistic shortcomings. But the Friuli-born cleric was not just responsible for the text. It can be assumed that he also designed the picture cycle himself.

The doctrinal poem is dedicated to the the German-speaking nobility in the empire of the Hohenstaufen and Welfs, symbolized as a noble lady called "German tongue". Both participated in a bitter struggle for kingship since 1198. The author recognizes moral decline as a consequence of the conflicts and with his poetry undertakes the attempt by society to convey courtly and religious norms in ten books. These include, above all, table manners, faithfulness in marriage, the handling of earthly goods, the duties of a good ruler, and the effects of human action on future life in the afterlife.

Refreshing Miniatures for a Better Understanding

Proudly displaying 120 miniatures, the manuscript is extremely rich with decorations, which allow the conceptual world of the Middle Ages to come alive for the reader. The always unframed pictures show strongly gesticulating figures with curved banderoles, which act as speech bubbles. You can also find battling knights on horses, humans in a variety of activities, small animals, heavenly angels, but also sinister figures like the devil. As a reading aid, the illustrations visualize the text and the figures are mostly personifications of forces or ways of thinking that are in opposition to each other and influence people. 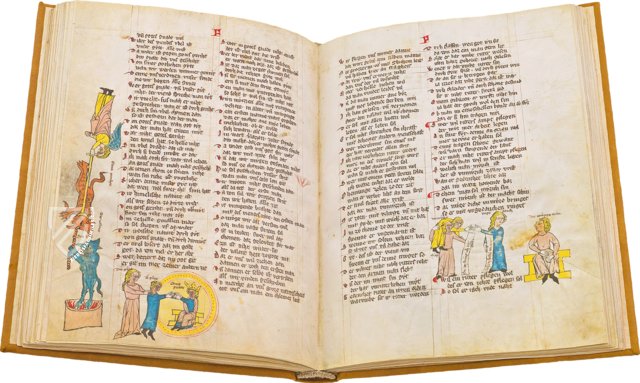 The game of backgammon has been played for over 5,000 years and was popular amongst the European nobility because of its perfect blend of strategy and luck. It is one of the world’s oldest board games and like chess had been studied by computer scientists. There is no authoritative text in regard to the rule of the game, but the “rules of play” are fairly uniform in international competition. The twelve points of each board are depicted in detail, as are the dice. 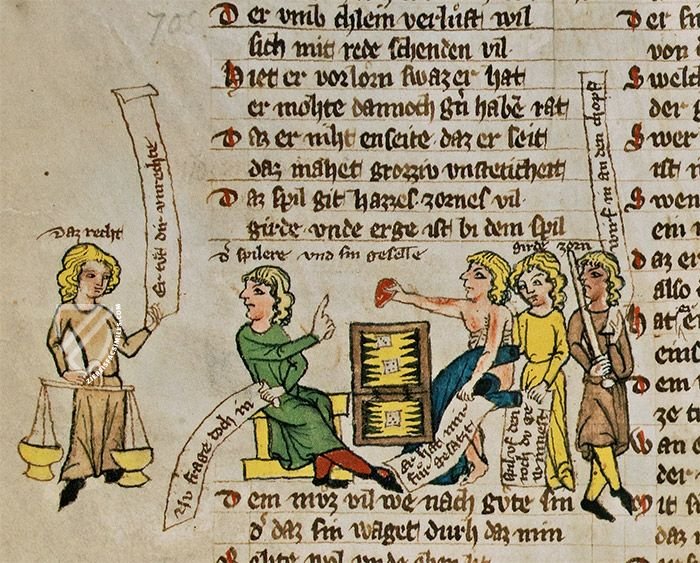 Battle Between Virtue and Vice

This moralizing manuscript, intended to teach a chivalric code of conduct, opens with a full-page tournament scene showing the battle between virtue and vice. Dressed in yellow and clapping her hands in the upper-left corner, Lady Virtue’s banderole exhorts her knights to “drive off the vices” while Lady Vice’s banderole instructs her knights: “protect yourselves against the virtues”.

In the field below, mounted knights engage in single combat, some wearing great helms: faithfulness against inconstancy, justice against injustice, moderation against immoderation, and generosity against avarice. The virtues are getting the better of the vices and chase them from the page, symbolizing that men can reformed through a moralizing education. 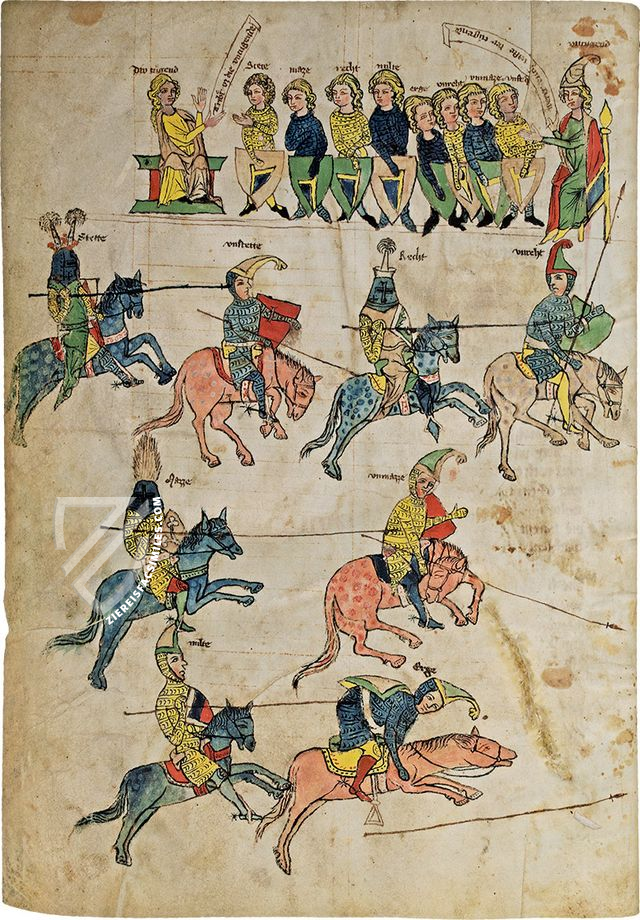 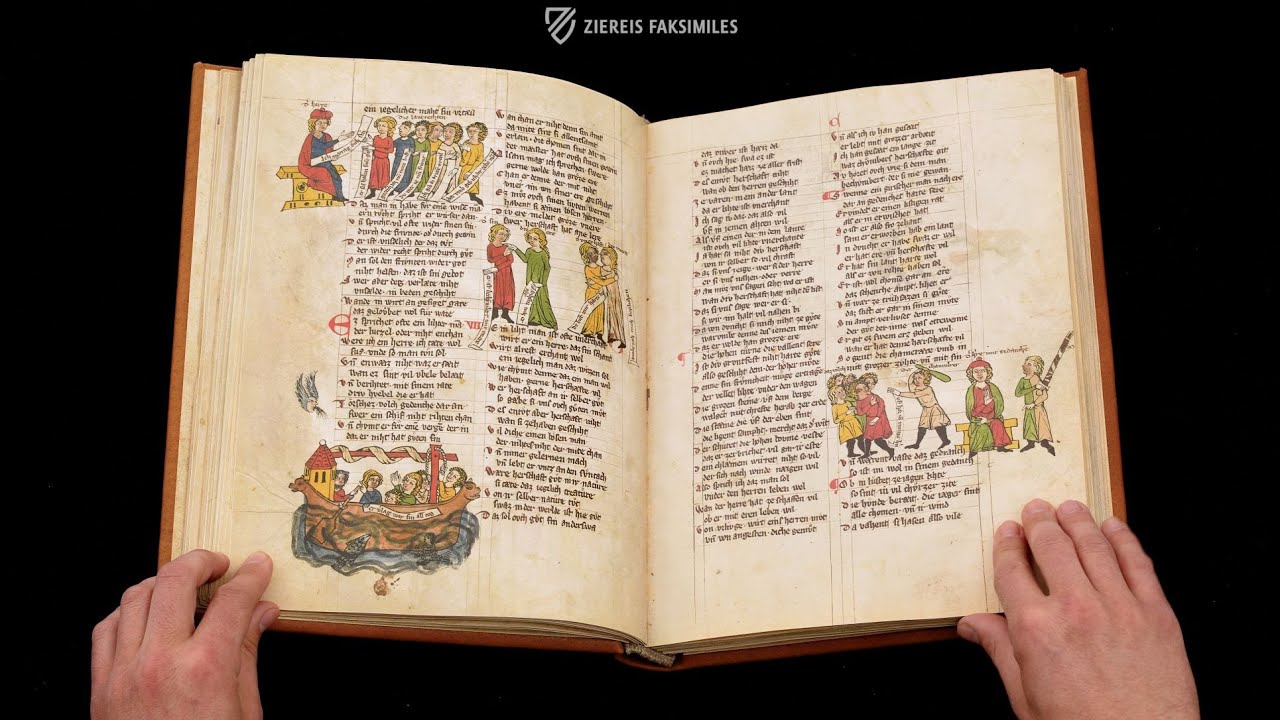 The commentary volume contains a complete transcription of the Middle High German text as well as descriptions and explanations of all 120 miniatures.
1 volume: Exact reproduction of the original document (extent, color and size) Reproduction of the entire original document as detailed as possible (scope, format, colors). The binding may not correspond to the original or current document binding.
Price Category: €€€ (3,000€ - 7,000€)
Edition available
Price: Log in here!
Order / Ask a Question

Reichert Verlag – Wiesbaden, 1980
Publisher: Reichert Verlag – Wiesbaden, 1980
Limited Edition: 500 copies
Reproduction of the entire original document as detailed as possible (scope, format, colors). The binding may not correspond to the original or current document binding.
Price Category: € (under 1,000€)
Edition available
Price: Log in here!
Order / Ask a Question
You might also be interested in: