The monumental story of the Trojan War has inspired artists, writers, and directors for centuries. One of the most beautiful adaptations of the epic material was manufactured in Paris ca. 1500. The illustrated History of the Trojan War was illustrated by artists in the circle of the famous master Jean Colombe and is based on the literary model of the Italian author Guido delle Colonne. The masterpiece is furnished with breathtaking miniatures. The expressive, moving images illustrate the events of the ancient legend and offers an attractive source about life in France at the time of its genesis.

The mythological tale of the Trojan War is without a doubt one of the most influential and oft-adapted legends of all time. It has been continuously adapted in various forms, the most recent of which was the Oliver Stone blockbuster Troy with Brad Pitt and Orlando Bloom in the leading roles. The timeless saga has also been reworked countless times in literature. The Italian author Guido delle Colonne dedicated himself to the ancient material in the year 1287. He produced one of the most important literary editions of the epic, which was cited and reworked throughout the entire Middle Ages. Ca. 1500, the Italian’s masterpiece was furnished with epic illustrations in the art studio of the French illuminator Jean Colombe. The result was one of the most astounding illuminated manuscripts in the history of medieval book art. The manuscript is an unbelievably richly furnished picture book with artistic and historically informative miniatures on practically every page.

The History of the Trojan War by Guido delle Colonne

Guido delle Colonne was an Italian author who lived in 13th century Messina. His most famous work was the History of the Trojan War, which he composed at the behest of French governor Aymar de Poitiers. The extremely wealthy de Poitiers loved the arts and literature, as such he possessed one of the most astounding collections of manuscripts in the Middle Ages. Delle Colonne did not use Homer’s famous epic the Iliad, which was only known in Western Europe from hearsay at that time, as a template for material, but rather made use of two depictions of the Trojan war supposedly composed by eyewitnesses. In doing so, it is the descriptions of Dictys Cretensis, who supposedly experienced things from the Greek side, as well as the account of Dare Phrygius, who was supposedly in Troy. Delle Colonne only took the rough framework of the story from Dictys and Dares, which he filled with fantasy and cleverly furnished with love stories, chivalrous fighting scenes, and scholarly digressions.

The French Adaptation of the Masterpiece

Guido delle Colonne’s Trojan Romance was furnished with an unbelievably rich miniature cycle by artists in the circle of the talented Parisian master Jean Colombe ca. 1500. Colombe and his students were able to compose an unforgettable monument in the history of miniature art with the illustration of the ancient saga. The picture cycle of the History of the Trojan Warbelongs among the most superb specimens to be created in the history of book illumination. The work contains 83 exceedingly magnificent miniatures. 17 pictures stretch across an entire book page, which have a monumental effect similar to great panel paintings. The pictures light up in a vivid variety of color and are encompassed by gold leaf frames. They show scenes in the style of the Renaissance, so the battle for Troy was transposed into medieval France.

The impressive miniatures of the History of the Trojan War so clearly set the scene for the individual moments of action in the tale that the events are completely understandable without the text and only with the aid of the illustrations. Having said this, the events represented in the text are not exclusively illustrated, the spontaneous narrative pleasure of the artistic circle around Jean Colombe shows itself in small embellishing details and anecdotes that do not occur in the story. Knights are pictured in struggle for life and death, one sees medieval gatherings at table and the communication of messages of love to ladies in Renaissance garments. Never before was an illuminator so successful in designing pictures of such drama and expressivity. The miniatures of the precious manuscript need not shy away from any comparison with the paintings of great masters. A few of the pictures show everyday objects in in an artistically pleasing manner as they prevailed in Renaissance France. Typical architectural features are depicted, along with typical garments and costumes. The pictures of the story are not only captivating because of their graceful beauty, but likewise represent an extremely interesting, historically significant source about life in the Middle Ages. 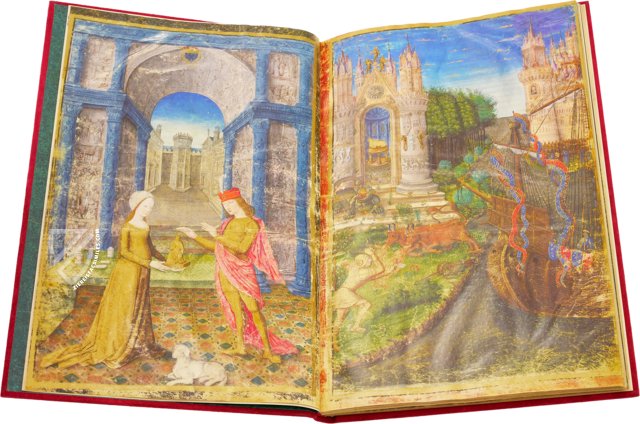 The Death of Achilles

Stripped of his armor and bleeding profusely from no less than five wounds, the corpse of the mighty Greek warrior Achilles is dragged through the streets of Troy. According to Homer, Achilles was fatally wounded with an arrow fired by Paris, but the author, Guido delle Colonne, was working from a different tradition. Instead, Paris is shown armed with sword and halberd and standing in front of a temple, inside of which four dead bodies are lying, indicating that Achilles was killed in a mêlée. 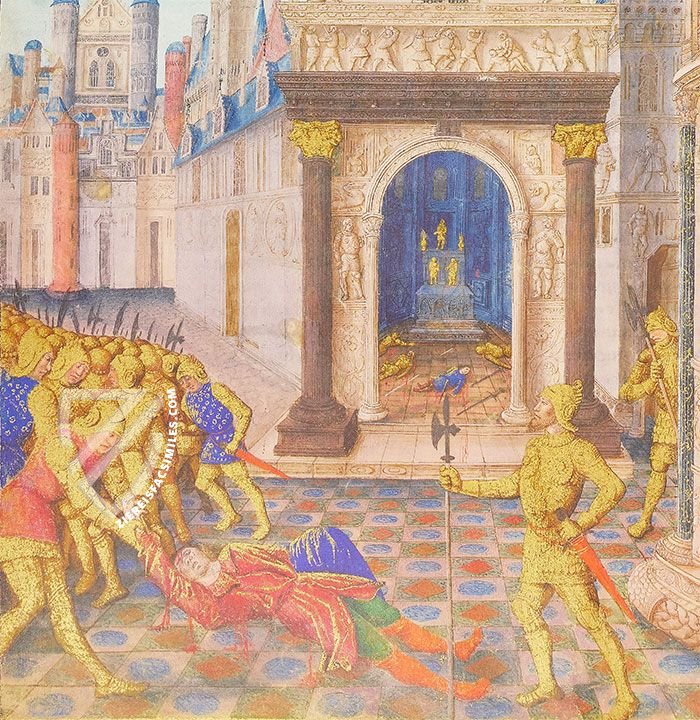 The mythology surrounding the Trojan War is complex, it was already hotly debated during antiquity and manifold versions of the story exist. Their differences hinge on questions regarding key aspects of the story, and one of the most important regards the nature of Helen’s departure from Sparta: was she taken by force or did she go of her own free will?

As soldiers carry off loot from the French Renaissance cityscape in the background, others brawl in the streets where the bodies pile up, one man has a dagger shoved into his throat as he falls to his knees. Jean Colombe puts an ambiguous look on Helen’s face and although two gauntleted hands hold her by the arm, it is unclear whether she and her handmaidens are being escorted or abducted. 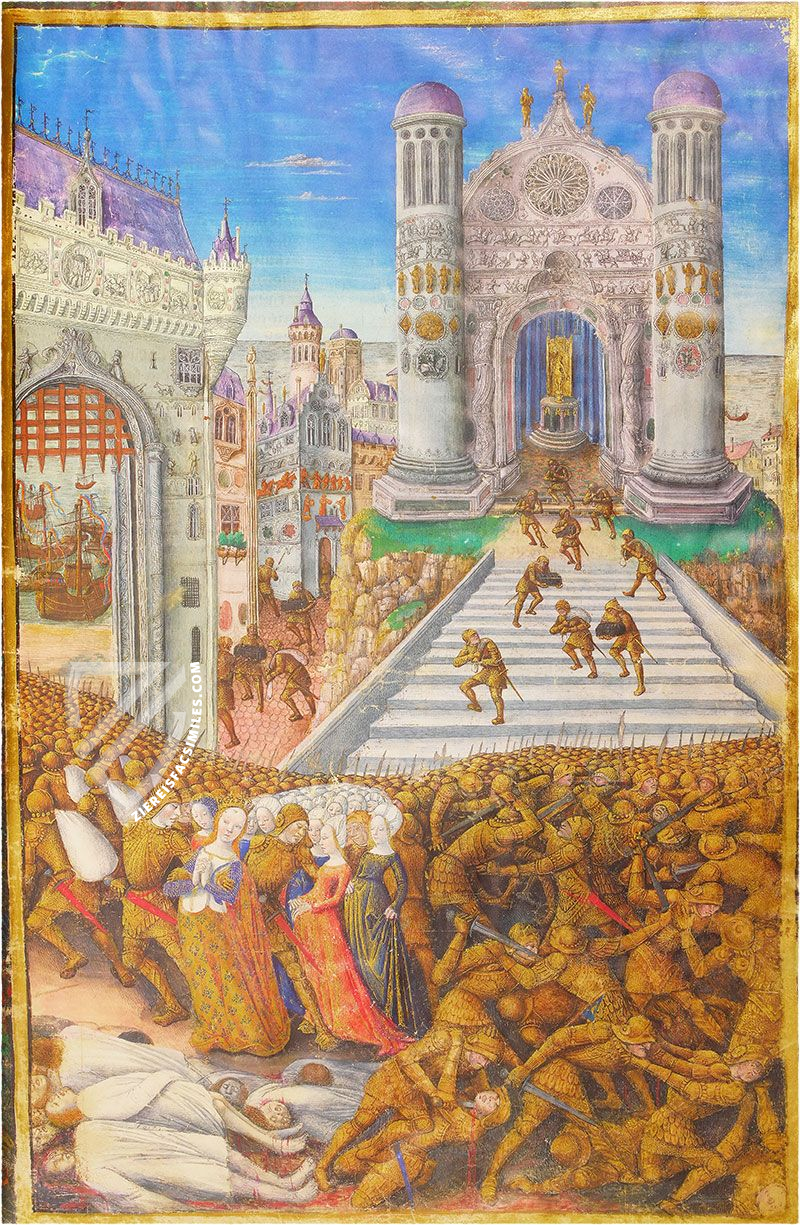 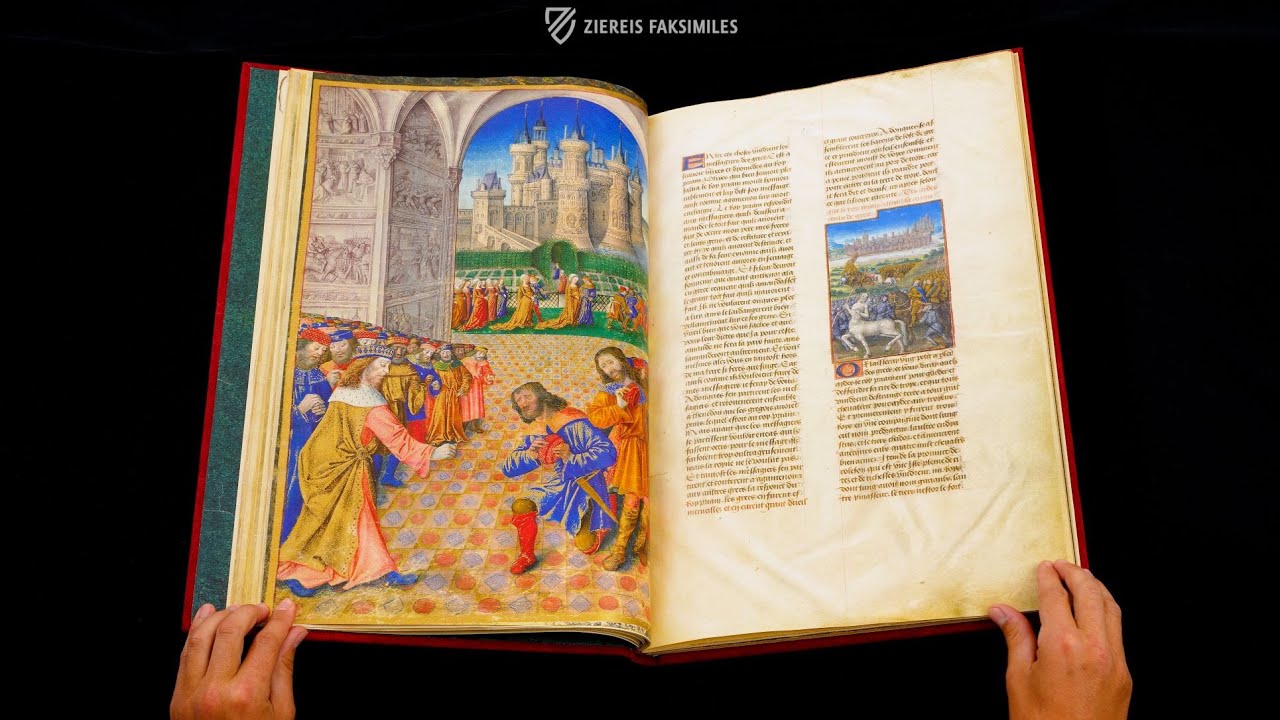