As the only remaining pages from the burnt Turin prayer book, these four sheets provide a wondrous glimpse into the grandeur and high quality of the original artistic arrangement of the manuscript. The master of Parament of Narbonne, Jan van Eyck, and his artistic circle of colleagues were the artists of the picture pages. The fateful story of the prayer book only serves to stress the importance of the four remaining pages of in the Louvre.

Standing before you are the only remaining four pages of the great manuscript treasure of the 15th Century; the pieces of the Très Belles Heures (Turin Hours) of the Duke of Berry. The prayer book was retained in Turin, but fell victim to a 1904 fire. Only the four sheets remain today, but nonetheless testify to the splendor and artistry of the origin, important prayer book.

A Great Master at Work

The five miniatures on the four pages of the “Leaves of the Louvre” derive from the hands of the great artists of its time. The master of Parament of Narbonne was responsible for the original design. Jan van Eyck and his colleagues partly filled out and completed all of the missing sections of the miniature pages. The precious miniatures pages inspire with artfully draped foliage, grandiose initials, playful bas-de-page-miniatures and especially the main scenes in bright colors and well thought-out composition. The latter part appears in its detailed execution almost as its own panel painting. The fact that this work of art is still available to seen to this day is truly a fortunate circumstance to be grateful for.

Duke Jean of Berry was the patron of the Très Belles Heures. For reasons unknown, he gave the manuscript to his treasurer Robinet d’Estampes in 1412, who opted to divide the book into three parts, later deciding to sell two of them to the House of Bavaria-Holland. The portion he maintained is well-known today as the Très Belles Heures de Notre Dame. The prayer book, which came together with the so-called Turin-Milan Book of Hours, ended up in the House of Bavaria-Holland, which commissioned in 1424 the young Jan van Eyck to finish it. After several other stations, the book ended up in 1720 with the House of Savoyard in Turin, where it was retained in the National Library. By this time, historians believe the four pages, now called the “Leaves of the Louvre”, were already stolen from the book – perhaps due to for their special splendor? That unfortunate act would ironically be for the better, because the remainder of the Turin Prayerbook burned in 1904 during a fire in the Turin Library.

The four pages have called the Louvre home since the 19th Century. Originally the prayer book comprised of 93 pages with 40 of whom being whole-page paintings. The special feature of the Prayerbook are the unordinary, essentially one-of-a-kind prayers for Saints who incidentally are not found in the current Compendia. The illustrated miniatures testify to the artistry and mastery of the prayer book, which also is of an impressively high value from the perspective of Art History as well. The art historian Paul Durrieu arranged two years before the fire to have the picture pages of the Turin Prayerbook printed in black and white. Thus a shred of the grandeur and beauty of this late middle-aged manuscript is still somewhat about to be seen. Maiestas Domini with the Christ of Sorrows and the Virgin Advocate

This splendid miniature by the Master of the Llangattock Hours depicts God the Father as a medieval king with scepter and globus cruciger enthroned before a splendid tapestry upheld by two angels. Exhibiting the bleeding wounds of the Passion and flanked by two more angels holding his bloody funerary shroud, Jesus kneels on the column that he was tied to during his flagellation on the left as the Virgin Mary kneels and presents the breast with which she nourished the Son of God on the right. The Master of St. John the Baptist explores the theme of martyrdom on this splendid page through three images framed by artful red-blue-gold tendrils. He begins with the first Christian martyrs: the Massacre of the Innocents in the bas-de-page and St. Stephen kneeling in prayer as he is stoned to death in the historiated “O” initial above.

In the primary miniature, Christ blesses a group of martyrs as they are beheaded, two of whom lie on the ground next to their severed heads. Their pious facial expressions contrast the ugly grimaces of their executioners. One dressed in blue is about to strike a blow while the other, dressed in yellow, drags one of the victims by his hair in front of the seated figures, probably Roman officials. 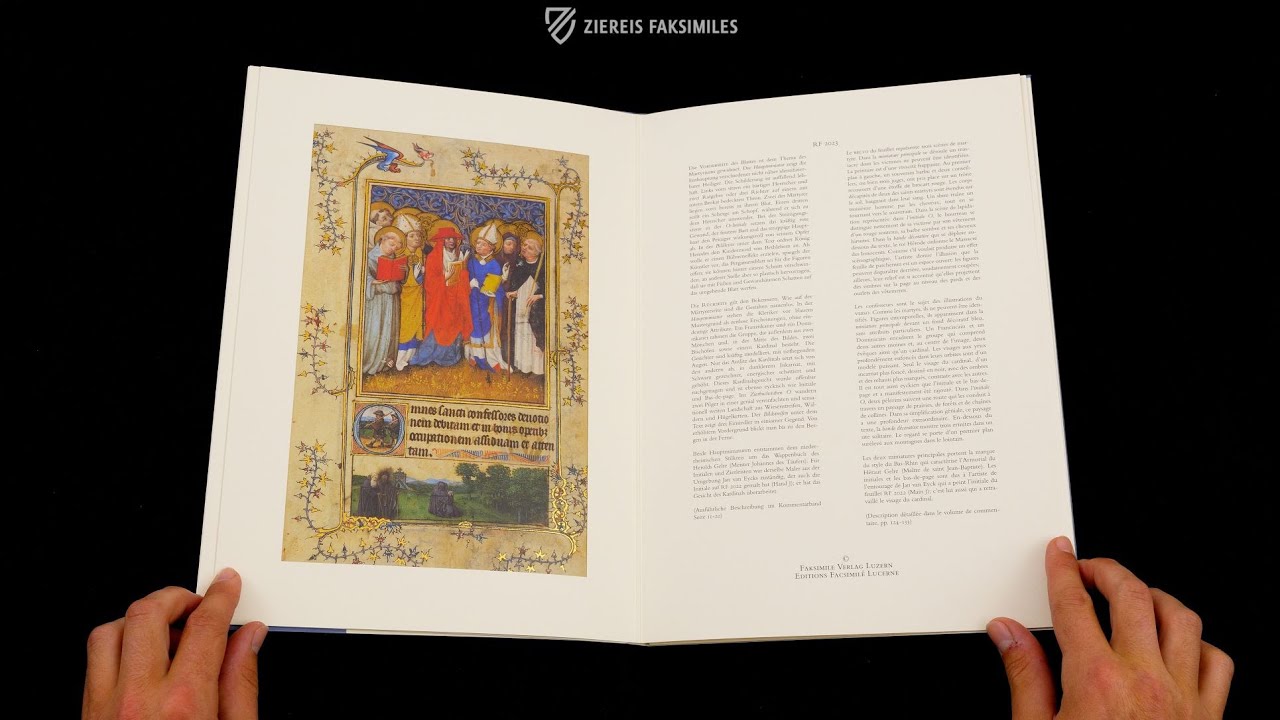 Publisher: Faksimile Verlag – Lucerne, 1994
Limited Edition: 980 copies
Binding: The four leaves, the brochure, and the commentary volume are presented in a linen-covered case
Commentary: 1 volume (206 pages) by Eberhard König, Gabriele Bartz, Angelo Giaccaria and François Huot O.S.B.
Languages: French, German
1 volume: Exact reproduction of the original document (extent, color and size) Reproduction of the entire original document as detailed as possible (scope, format, colors). The binding may not correspond to the original or current document binding.
Regular price without login (like new)480 €
Login for a Better Price!
Order / Ask a Question
You might also be interested in: Queen of Scotland, France and (in truth) England: Mary Stuart's book of hours, together with the certificate of execution signed by Elizabeth I