This fascinating collection of 91 drawings by the great Leonardo da Vinci presents the master of the Italian Renaissance as an enthusiastic animal researcher: the most varied animals, primarily horses but also dogs and cats, cows and other livestock, and even dragons and creatures of fantasy are portrayed here in detailed studies. The masterful drawings can be wonderfully sorted within Leonardo’s artistic creativity and thus make his work impressively evident.

Horses and Other Animals

Leonardo da Vinci (1452–1519) is considered to be the greatest universal genius of the Italian Renaissance, or even in all of history! He occupied himself not only as a fantastic painter, sculptor, and passionate draftsman, but also as a natural scientist, a philosopher, and explorer in a few other disciplines. For Leonardo, nature was a fascinating cosmos, to which he dedicated countless studies. He recorded his observations in countless notebooks and masterful drawings. An especially entertaining aspect of this preoccupation is the animal world.

An impressive collection of drawings by Leonardo da Vinci, one of the greatest masters of draftsmanship, are stored in the Royal Library at Windsor Castle. This was brought to Great Britain by Charles I, King of England, who acquired the bundle in the year 1630. In the bundle at hand – a part of the great National Edition of the manuscripts and drawings by Leonardo da Vinci – 91 masterful drawings were chosen from this precious fundus that have to do with the theme of Leonardo’s preoccupation with the animal world: drawings of horses and other animals.

The drawings give a delightful, often bizarre inside view into the animal kingdom. Alongside depictions of dogs, cats, donkeys and cows, but also dragons and creatures of fantasy, the focus of the collection is on horses. Leonardo’s drawings originate from a time period of 40 years and are chronologically ordered. They were divided into six primary themes: studies of horses and dragons for morning worship, proportion studies, studies for the Sforza, studies for the Anghiari-horses, studies for the Trivulzio-horse, and finally horses and other animals in later post–1510 allegories.

Leonardo as a Draftsman and Researcher

In this way, the masterful drawings can be wonderfully sorted within Leonardo’s artistic creativity and thus make his work impressively evident. Executed in various media, they also make it possible to experience Leonardo and especially as a grandiose draftsman. Alongside movement studies, which almost appear futuristic, one finds anatomical studies e.g. of the hind legs of a horse and wonderful study sheets with animals in action in every position possible. Here, Leonardo presents himself as a naturalist who carried out nearly-biological studies of the demeanor and anatomy of animals, which were recorded in the medium of drawing. 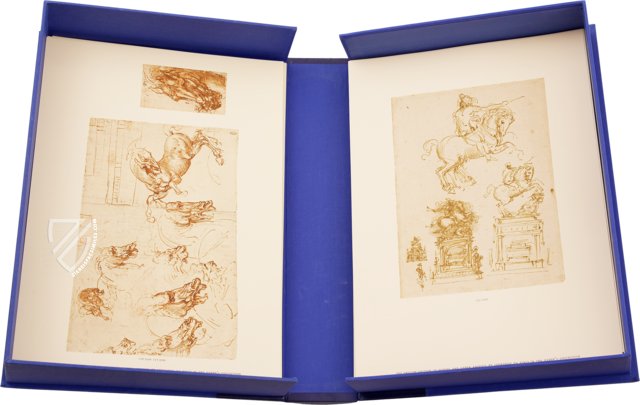 #1 The drawings and miscellaneous papers of Leonardo da Vinci in the collection of Her Majesty the Queen at Windsor Castle / Horses and other animals
Limited Edition: 350 copies

#2 The drawings and miscellaneous papers of Leonardo da Vinci in the collection of Her Majesty the Queen at Windsor Castle / Horses and other animals
Maruzen-Yushodo Co. Ltd. – London, 1987
Limited Edition: (Co-edition of the Johnson Reprint)
Detail Picture

Study of a Bull

This is a sketch of a bull, or at least appears to be since the rear half of the animal is only a faint outline while da Vinci focused instead on the head and shoulders of this friendly-looking bovine, who gazes directly at the beholder. It has well-muscled shoulders, curved horns, and a broad, even handsome face. Da Vinci appears to have not been happy with the way the front legs and hoofs were executed because they have been redrawn numerous times, giving it almost as many legs as an octopus. 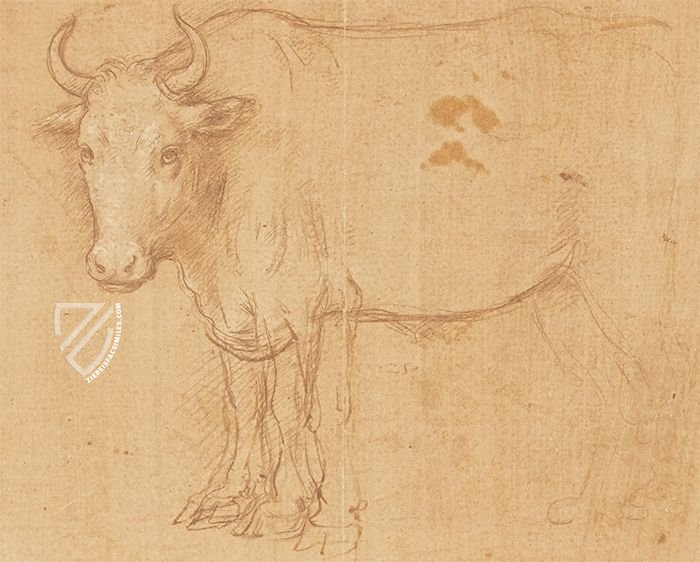 Horses, St George Fighting the Dragon, and a Lion

This sheet is filled with animals in dynamic and dramatic poses, some engaged in scenes of violence, especially along the right side of the page where there are five vignettes of St. George mounted on horseback and battling with the legendary dragon. They have been depicted from various angles as da Vinci sought the best way depict the horse twisting away from the monster.

The theme connecting all these animals appears to be “flexion and tension”, which is perhaps best exemplified by the lion in the upper left corner, which appears as though it were about to pounce. Lions were considered to be the princes of the animal world due to their power and flexibility. Meanwhile, horses are depicted either mid-stride or bucking on their hindlegs. 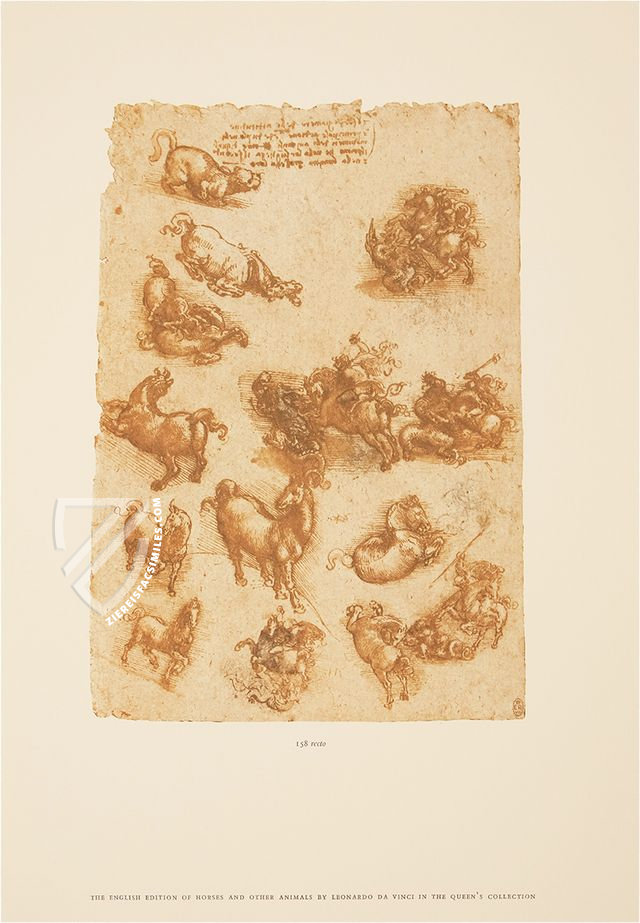 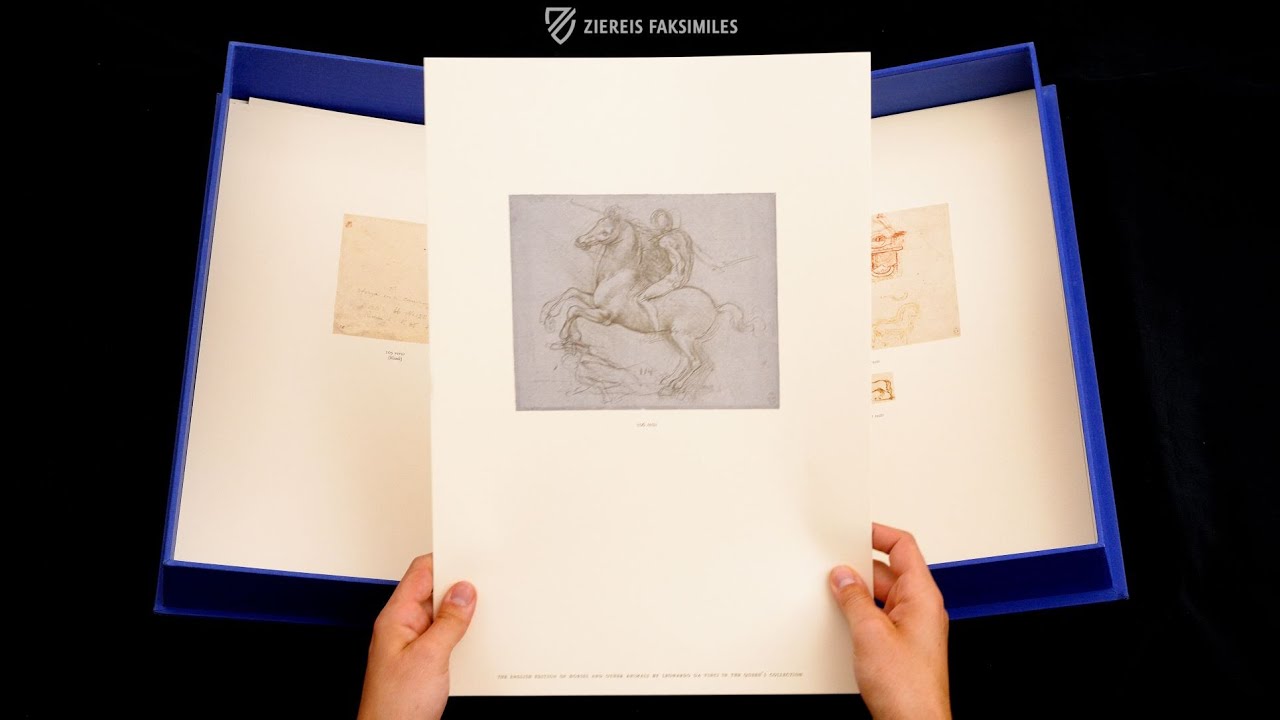 Maruzen-Yushodo Co. Ltd. – London, 1987
Publisher: Maruzen-Yushodo Co. Ltd. – London, 1987
Limited Edition: (Co-edition of the Johnson Reprint)
Binding: Presented with the commentary volume in a blue cloth box with a blue leather spine
Commentary: 1 volume (232 pages) by Carlo Pedretti
Languages: English, Italian
1 volume: Exact reproduction of the original document (extent, color and size) Reproduction of the entire original document as detailed as possible (scope, format, colors). The binding may not correspond to the original or current document binding.
Regular price without login (like new)3,980 €
Log in for a Better Price!
Order / Ask a Question
You might also be interested in: