The manuscript at hand is a 12th century encyclopedia containing information of both a liturgical and occult nature, while also addressing more practical subjects like agriculture and medicine. It is a massive tome from Northern Italy, the contents of which are richly embellished in the Romanesque style.

The Liber Magistri is a 12th century manuscript whose 900+ pages address topics ranging from history to paleography, liturgy, art, music, theater, miniature painting, the occult, medicine, and agriculture. Also known as Codex 65 in the Archivio Capitolare della Cattedrale in Piacenza, the liturgical section contains the entire repertoire of chants for celebrating Mass as well as the Hours of the Divine Office. The work was created for use by the religious community of Piacenza, a northern Italian city at the confluence of the Trebbia and Po rivers, where the manuscript remains to this day as a prized possession of the cathedral library. Piacenza’s geographical position made it a crossroads between northern and southern Europe and as such it was a medieval cultural melting pot. The encyclopedic wealth of knowledge contained in the large tome, which measures 51 x 34 cm, is beautifully adorned with historiated initials and miniatures. It is hand-bound with stamped leather wrapped around wooden boards and adorned with bronze fittings at the corners and in the center of the cover. 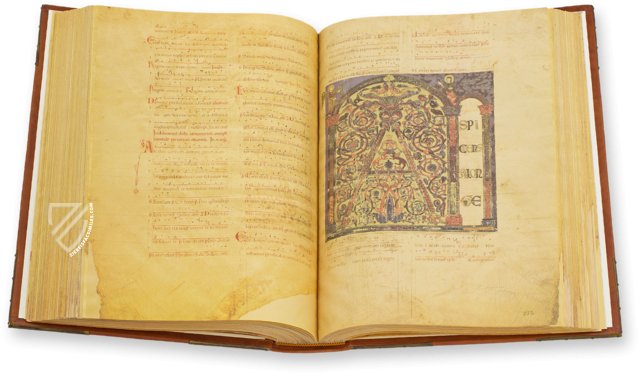 The unfinished miniature in the margin of this calendar page shows a vintner pruning his vines above a splendid golden initial, which is adorned with its own floral décor. He has a shovel hanging one of the branches behind him. This is a typical scene for the month of March, when preparations were made for the coming of spring. Pruning away old, dead limbs allows for the flourishing of new ones while also cultivating the proper amount of cover from the vine’s leaves. 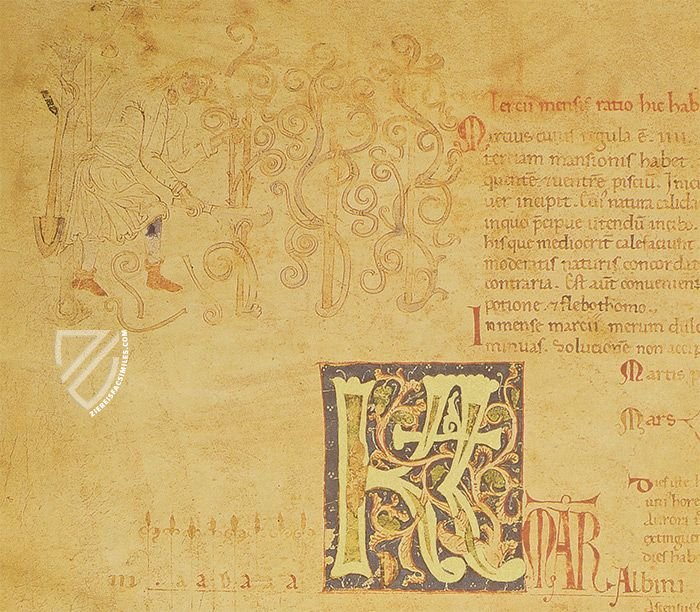 This page is from the musical section of the encyclopedic tome at hand and is a finely decorated example of musical notation from the High Middle Ages. The text is written neatly in black and red ink and is lined up with the music. It uses four-line staves and neumes – a medieval precursor to modern musical notation.

Several hymns are found on the page, including an early form of the Magnificat, a canticle derived from the Gospel of Luke that is devoted to the Virgin Mary and traditionally sung as a part of Vespers. It is preceded by a splendid gold leaf “H” initial with acanthus leaves. The Virgin Mary is depicted ascending to Heaven, where she is welcomed by the angels, as she leaves the Apostles and an empty tomb behind. 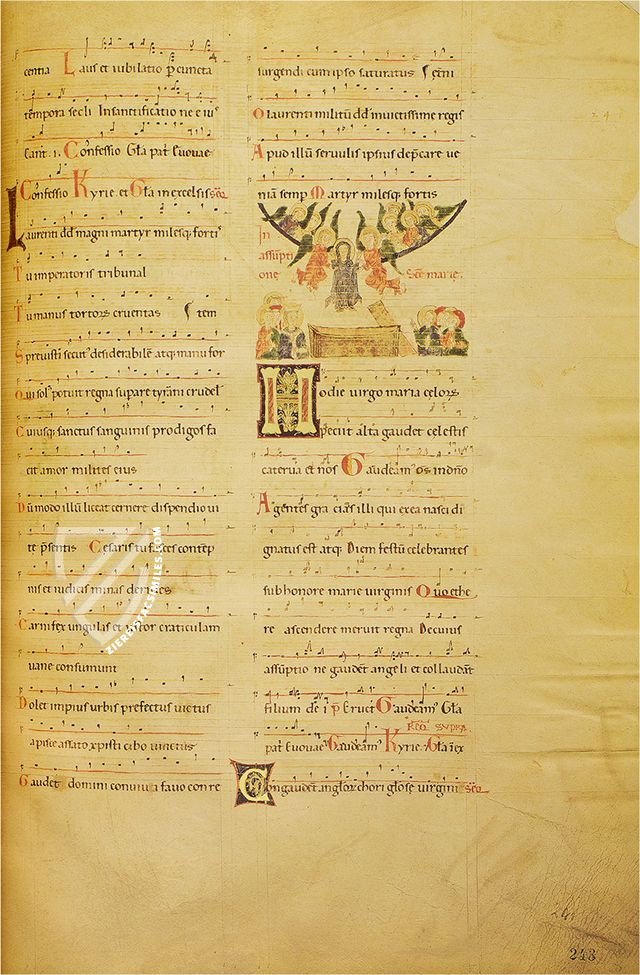 Tip.Le.Co – Piacenza, 1997
Publisher: Tip.Le.Co – Piacenza, 1997
Binding: Brown leather binding with bronze studs
Commentary: 1 volume by Brian Møller Jensen
Languages: Italian, English
1 volume: Exact reproduction of the original document (extent, color and size) Reproduction of the entire original document as detailed as possible (scope, format, colors). The binding may not correspond to the original or current document binding. The facsimile edition is printed in 5 colors and was carefully hand-bound. All bronzing was done manually.
Price Category: €€€ (3,000€ - 7,000€)
Edition available
Price: Log in here!
Order / Ask a Question
You might also be interested in: