The Mappa mundi by Andreas Walsperger was manufactured in Constance ca. 1448 and is a rare, original surviving world map of the German-speaking area. The map represents the earth as a disc, which is framed by celestial spheres. Various colors and gold elements embellish the map, which is considered to be a milestone of the history of cartography.

In the Christian idea of the world, Earth is at the center of seven celestial spheres. The image of the world was primarily based on the discoveries of the scholar Ptolemy. Parts of the medieval population envisaged the earth as a round disc with Jerusalem in the middle. Some Christian scholars disseminated this concept in scholarly works and above all with the help of illustrated maps. An especially beautiful map, which depicts the earth as a disc, is the mappa mundi – a schematic map of the medieval world view – by the Benedictine monk Andreas Walsperger. The map shows the roundness of the Earth and its surrounding celestial spheres. Zodiac symbols decorate the frame of the depiction.

The Creator of the World Map

Andreas Walsperger was born the son of a carpenter in Redkersburg ca. 1415. He became a monk at the Benedictine monastery of St. Peter in Salzburg in 1434, yet he left the monastery in 1442. Where else he might have lived, as well as the year of his death, has not been passed down. The Mappa mundi by Andreas Walsperger, which he made ca. 1448 in Constance, is one of the few original maps from the German-speaking area to survive. It is considered to be a milestone of historical cartography and is stored today in the Vatican Library.

The precious map is drawn in six natural colors and was embellished with elements of gold leaf. The majority of the orbis terrarium is taken up by the round field of the earth is aligned properly with geographic south at the top and north at the bottom. The Holy City of Jerusalem is found approximately in the center of the disc. The land is surrounded by the ocean. The seven celestial spheres are depicted as seven colored rings which are broken up by circles. These round forms represent the planets, the fixed stars, and the sun. The names of the zodiac signs and the winds at the margin of the earthly depiction are also noted. The map is an astounding document of the Christian worldview and represents a valuable tradition of earlier scientific findings. 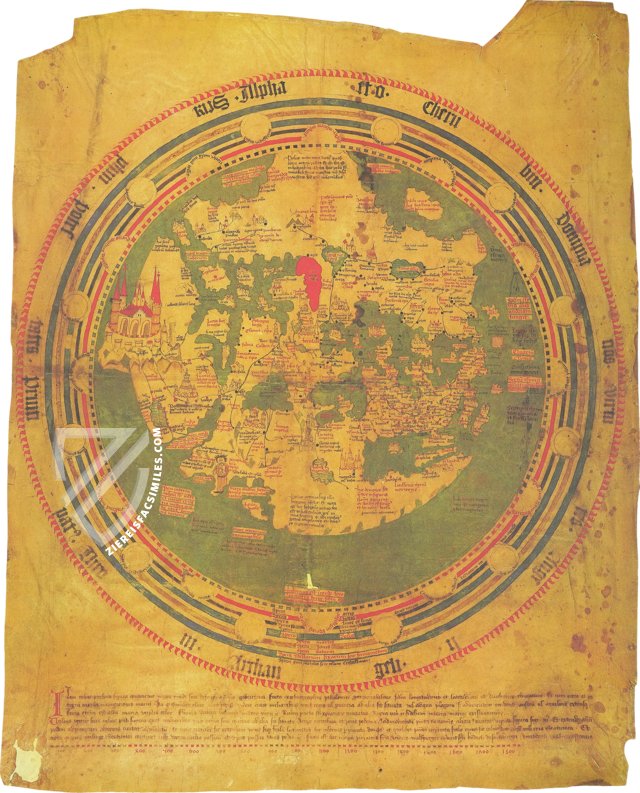 Although this Mappa Mundi has an unusual south-orientation, it nonetheless shows the world centered around Jerusalem. Surrounded by a wall with many towers, the holy city is shown alongside geographic features like the Sea of Galilee (mare galilee), Dead Sea (mare mortus), River Jordan, the Nile and its delta, and the literally depicted Red Sea.

The Muslim holy city of Mecca (melcha) is also depicted on the other side of Mt. Sinai (syne mons) in the Arabian Peninsula (Arabia regio). Important islands in the Mediterranean Sea like Cyprus (cypria), Crete (candia), and Rhodes (rodis) are shown with cities and towers, but Constantinople is represented only by a red dot – a symbol of the city’s declining fortunes as the Turks encircled it. 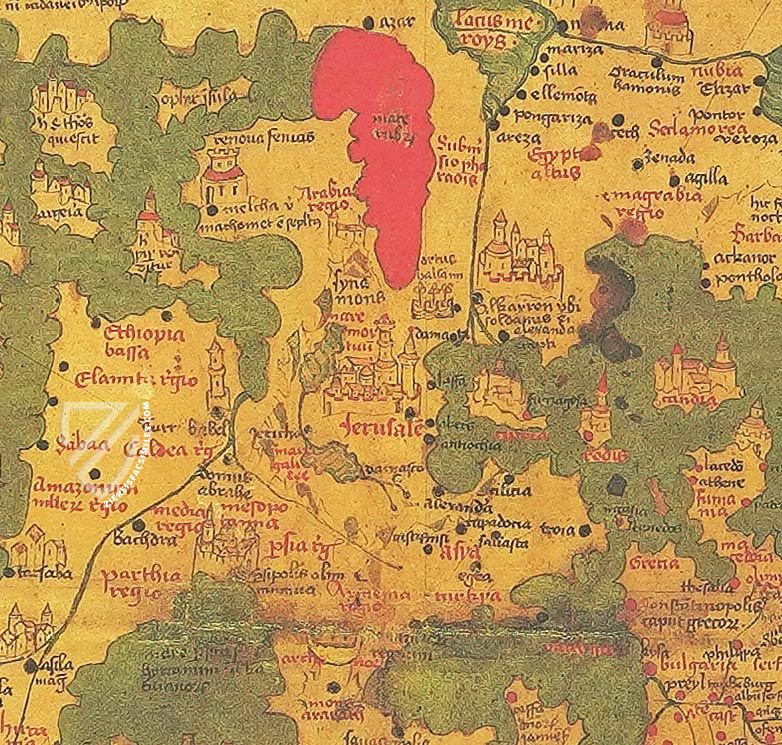 Earth is presented here as a disc framed by seven celestial spheres in accordance with the Christian concept of the universe at the time. The map is based heavily on the work of the ancient astronomer Ptolemy, especially with regard to the shape of the continents. Although centered on the city of Jerusalem like most Mappae Mundi, it is south oriented.
This is a fine example of the transition from the schematic and conceptual maps of the Middle Ages to works of cartography that actually attempted to be practical geographic representations useful for navigation. Nonetheless, Walsperger’s map incorporates decorative features such as the large castle depicted in China, a departure from other maps in the period that place it in the north. 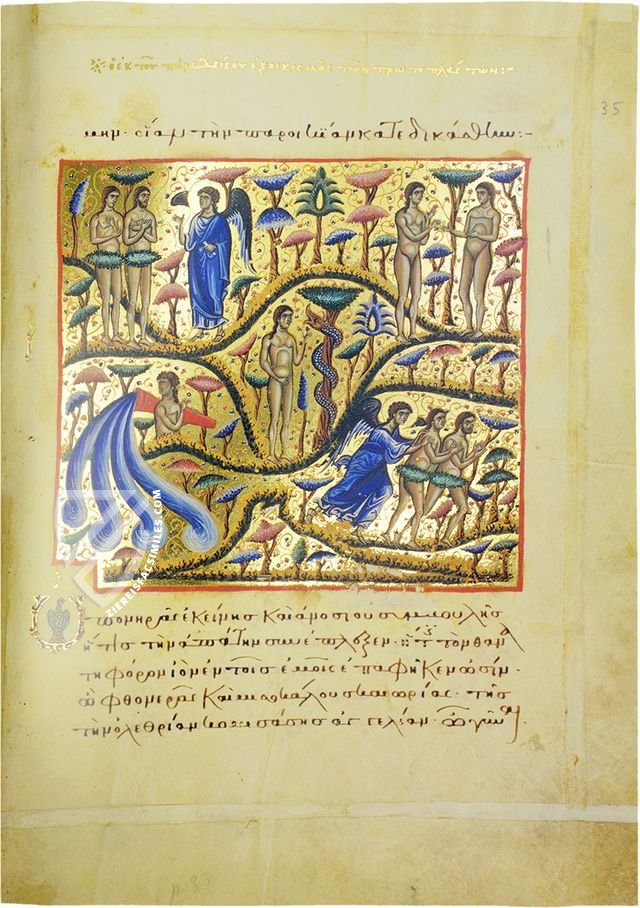 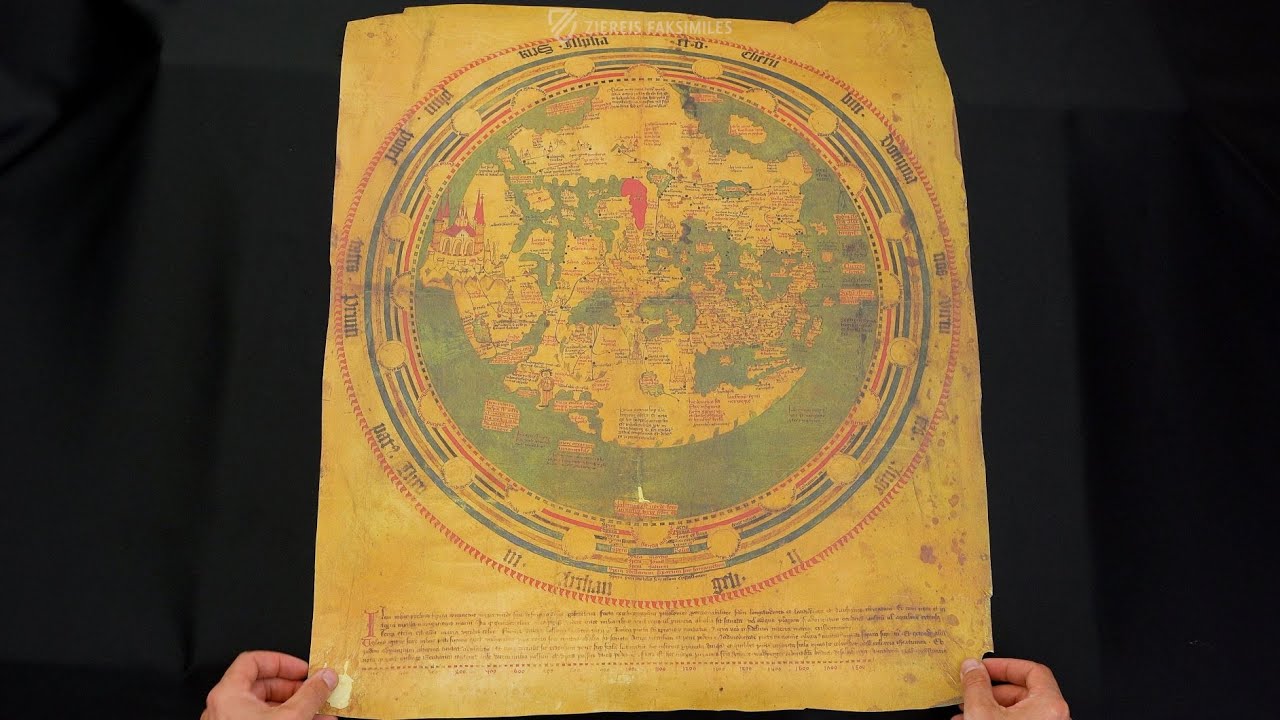 Publisher: Belser Verlag – Zurich, 1981
Limited Edition: not limited
Commentary: 1 volume by Edmond Pognon
Language: German
1 volume: Exact reproduction of the original document (extent, color and size) Reproduction of the entire original document as detailed as possible (scope, format, colors). The binding may not correspond to the original or current document binding.
Regular price without login (like new)890 €
Login for a Better Price!
Order / Ask a Question
You might also be interested in: 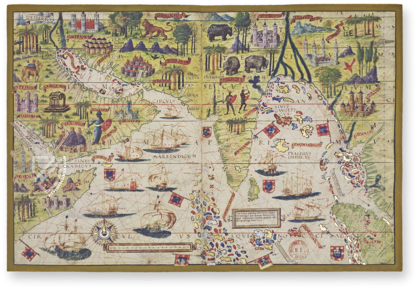