This manuscript is arguably the most beautiful of the “Soft Style” despite the fact that each page is filled with scenes of gruesome violence, martyrdoms to be precise: 700+ medallion miniatures with scenes of saints either meeting a violent end or being entombed. Despite their size, these scenes are incredibly detailed and feature elaborately patterned backgrounds. Floral frames connect these medallions and surround the exquisitely written text, including red/blue and gold leaf initials. Created ca. 1400 in Prague, this manuscript contains the 9th century text of the Martyrology of Usuard, written by the monk Usuard (d. 877) at the behest of Charles the Bald. This is a spectacular specimen from the court of King Wenceslas IV of Bohemia (1361–1419), which was one of the grandest in Europe at the time.

Sometime in the middle of the 9th century a Benedictine monk named Usuard (d. 877) produced a manuscript that travelled widely over the centuries and clearly influenced the illumination of the Late Middle Ages. This manuscript is the Martyrology of Usuard, which was commissioned by Charles the Bald (823–877) according to the prologue. This codex is unanimously considered among art historians to be one of the most noble and extravagantly illuminated manuscripts of the Gothic era. The text of the work deals with saints, how they endured their martyrdoms, and is adorned with impressive miniatures. The manuscript from ca. 1400 contains 700+ colored miniatures with golden ornaments in the International Gothic or Soft Style.

The Benedictine monk was a member of the Abbey of Saint-Germain-des-Prés in Paris and lived in the 9th century. Usuard was an important member of the monastic order and was famous for his astonishing Martyrology, which was adapted countless times over the centuries. In the prologue of the manuscript, it is told how the monk presented his work to Charles the Bald. Ca. 1400 the codex was expanded by a few saints and received its breathtaking book adornment at the court of Wenceslas of Bohemia.

The Martyrology played an important role in international courtly book art. The pictures of the manuscript are typical examples of the exquisite Bohemian painting of the Middle Ages and show distinctive influences of international art during the transition from the 14th to the 15th century. The miniatures show saints, who are either in the agonies of their martyrdom or whose remains are being buried. Each picture is captured in lively colors and is lavishly decorated with gold embellishments. The depictions are in round medallions, which are elegantly framed and connected with one another by naturalistic plant tendrils.

Usuard brought his codex along on his journey to Spain, where he was sent to collect important relics. His Martyrology remained in Catalonia for centuries, and later came into the possession of important aristocratic houses in Austria, Hungary, Sweden, and Italy. In the 17th century the valuable manuscript was attained by the Museu Diocesà in the Spanish city of Girona, where it is still housed today. 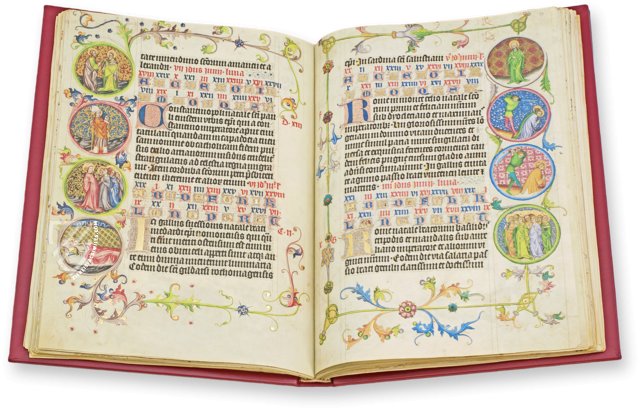 Martyrdom of St. Ignatius of Antioch

Saint Ignatius of Antioch was a disciple of John the Apostle and Bishop of Antioch who was martyred in the Coliseum in Rome on the order of the Emperor Trajan. Although his feast day is celebrated today on October 17th, the medieval calendar of saints placed it on February 1st, and so this medallion miniature is found alongside other martyrs for that month. He is shown stripped to the waist and wearing his bishop’s miter as he is attacked by lions before a red background with golden tendrils. 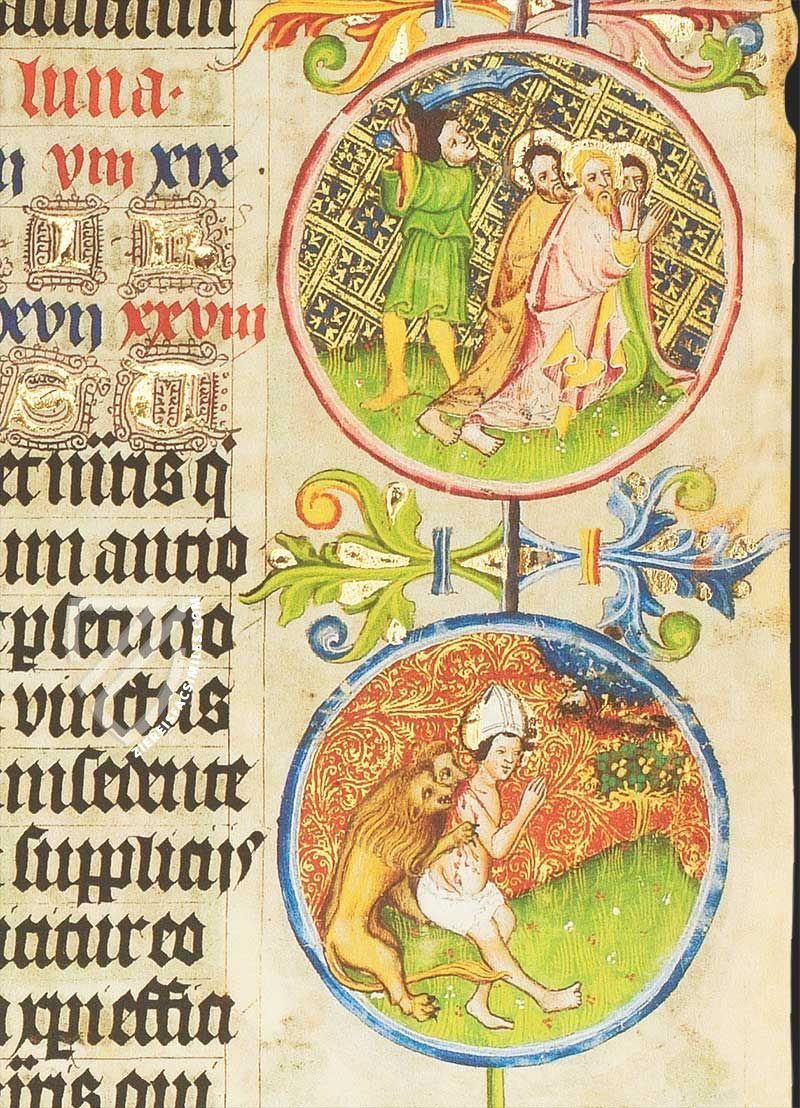 St. Pontianus of Spoleto and St. Germain of Izmir

This martyrology takes the form of a calendar, with each page presenting the saints associated with the respective dates. These are typically presented in the form of 2–5 medallion miniatures connected by multicolored tendrils running along the margins. This page is more innovative and breaks with this strict image program.

The body of text on this pages has a frame of floral interlace on three sides with a bas-de-page miniature on the fourth. It is a masterful depiction of a terrifying dragon with red eyes holding St. Germain in his mouth, who hangs limply in a green tunic and blue tights. A miniature incorporated into the floral frame depicts an angel visiting Pontianus of Spoleto, who was imprisoned and beheaded by the Romans on January 14th, 175. 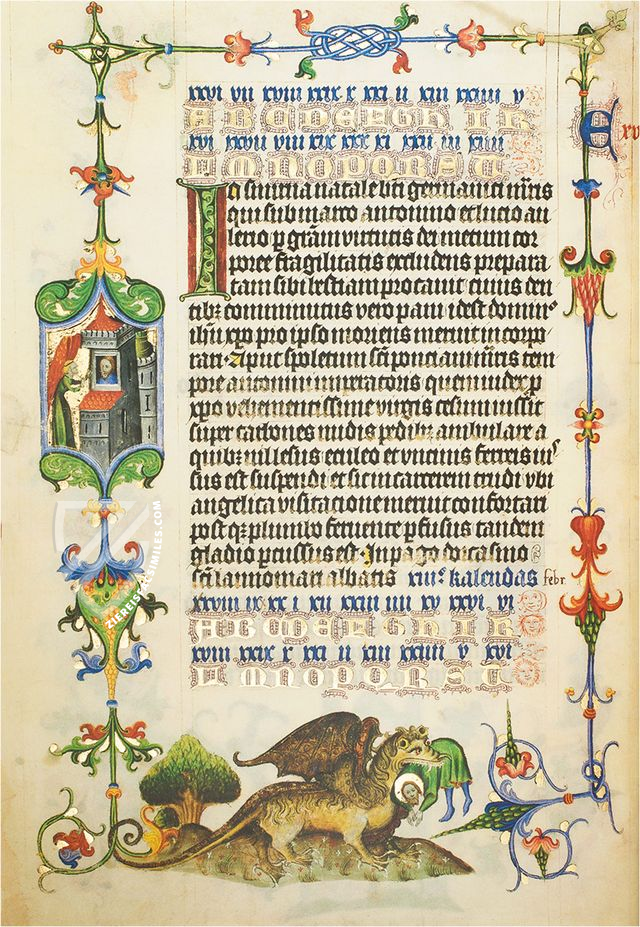 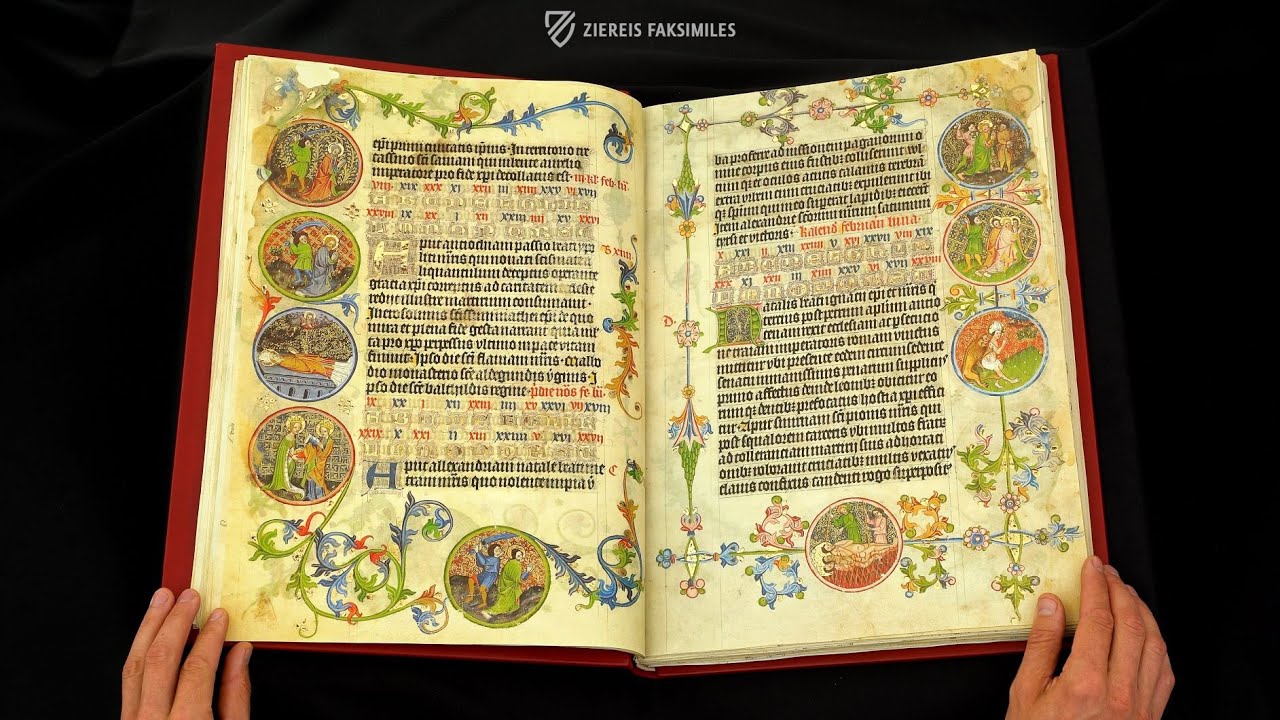 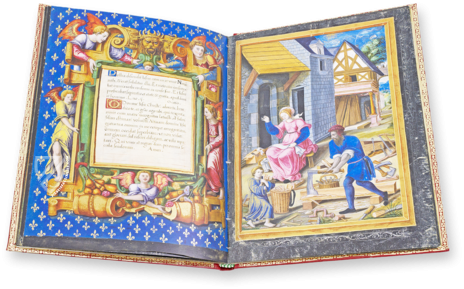