In the year 1541, one of the most influential treatises on Renaissance architecture worldwide was printed. It is the co-called Medidas del romano, which deals with the high art of architecture as practiced in Italy. The important work contains countless vivid and detailed sketches and made its author Diego de Sagredo famous far beyond the borders of Europe. To this day, his masterful treatise plays an irreplaceable role in architectural instruction at universities.

The so-called Medidas del romano or Roman Methods – is the first treatise on architecture to be composed outside of Italy. Simultaneously, this text is one of the most important and influential works of the Middle Ages written about the art of construction. The treatise is written in the style of the humanist authors of the Renaissance and was composed by the famous and extremely talented master builder and author Diego de Sagredo. It contains countless sketches and illustrations in printed graphics, which not only explain and demonstrate architectural elements, but also illustrate the anatomical and physical conditions of the human body. This is a masterful text of incredible worth by a true polymath.

Diego de Sagredo was arguably the most important master builder in the history of Spanish architecture. The scholar from Burgos lived from ca. 1490 to 1528 and revolutionized Spanish architecture during the Renaissance. He entered the University of Alcalá de Henares in 1512 and there devoted himself to the study of classical building regulations. Later, he went into the service of the bishop and Cathedral of Burgos and was substantially involved in the construction of the archbishop’s palace in Alcalá de Henares. Having said this, his greatest achievement is undoubtedly his treatise on the Roman art of building. With his Medidas, Sagredo brought the art of architecture as it was practiced in Rome to Spain, expanded and appended current knowledge, and also managed to make his expertise comprehensible for laymen. The astounding accomplishment of the great scholar remains unforgettable to this day. His work is still cited in architecture classes at universities.

The sophisticated structure of the Medidas makes the work an absolute highpoint of humanist literature. The text is recorded in the form of a dialogue, more precisely, it portrays a conversation between Tampeso – a pseudonym for the author Sagredo – and the French painter Léon Picard, who attained great fame in medieval Burgos. The sculptor Felipe Bigarny from Burgundy and the Spanish smith Cristobal de Adino were also mentioned. Although the content of the Medidas is of extremely high literary value, the text was nonetheless intended more for craftsmen, masons, sculptors, and smiths than for scholars of architecture. It was meant to familiarize the working men with the high art of Italian architecture. The Italian ordering of columns was at the center of the work. De Sagredo’s treatise is the only text concerning Renaissance architecture to gain fame outside the borders of Europe. It even had an influence on construction in the Americas, which is still discernible in numerous buildings today. 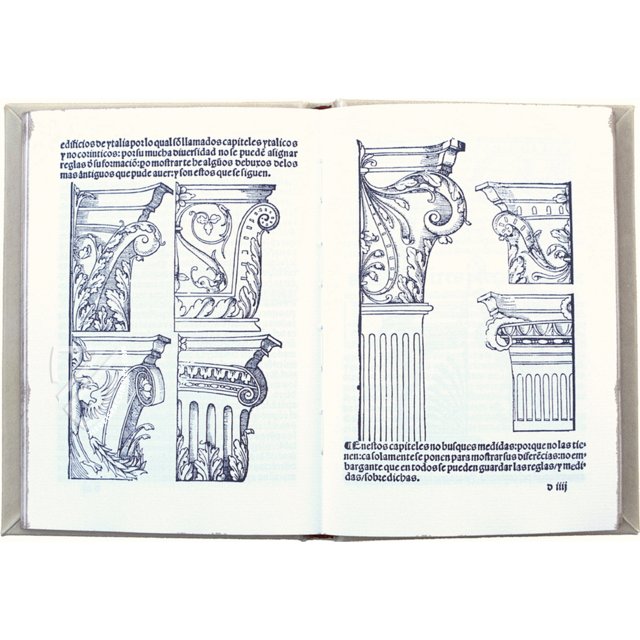 Here we have two examples of column capitals, one from the Corinthian order on the left and a fanciful capital based on the Composite order, a so-called “nonce order”. The Corinthian order is generally regarded to be the most elegant and is distinguished by its rows of acanthus leaves and scrolls. Diego de Sagredo has taken some artistic license with the nonce capital on the left, which most notably features the head of a horned ram supported by an acanthus leaf. 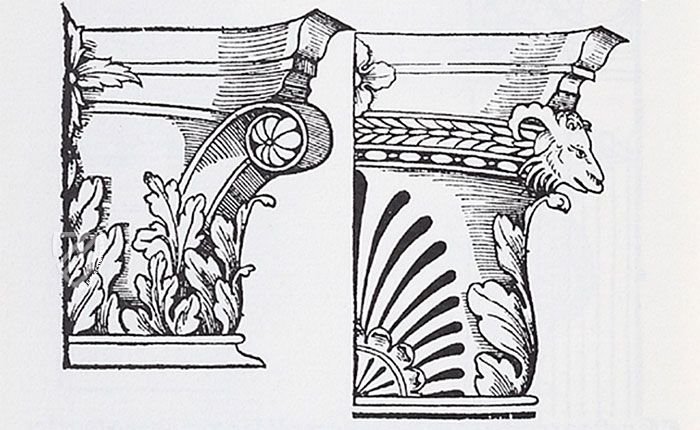 Printed in black and red ink, the title of this important and practical guide to classical architecture and related topics is presented within a classically styled frame. Two bearded figures seated in the foreground point to the year of its publication, 1541, which is given in Roman numerals. A crowned shield with the escutcheon of the Kingdom of Portugal nods to its origins in Lisbon.

Two cherubs crouching on top of the frame hold a drapery that hangs down along each side where they are grasped by two more mythical figures. They are hybrid creatures with the bodies of men, the wings of angels, and the legs of goats. The composition of this page is perfectly balanced, including the smaller figures depicted in relief within the frame. 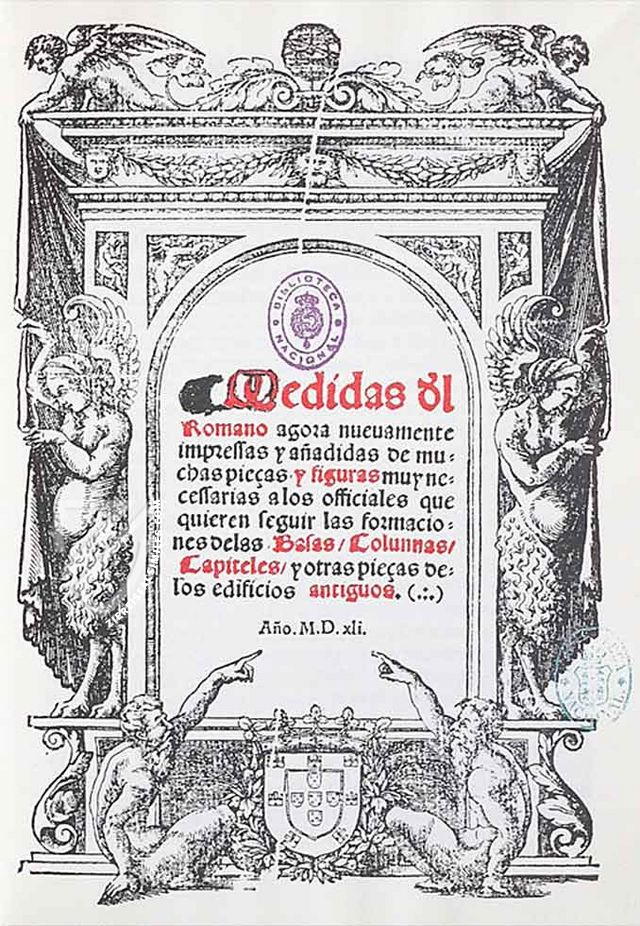