A unique treasure chest of European porcelain painting: the so-called I modelli di Meissen per le cineserie Höroldt. Johann Gregorius Höroldt, active in Meissen beginning in 1720, is generally considered to be the most famous porcelain painter. He was a court painter in Meissen, which was the center of European porcelain manufacturing, and is particularly renowned for his “Chinoseries” – porcelain decorated in the Chinese style. The splendid motifs include plants, birds, and other animals, humans in exotic garments, and much more. It is no surprise that Höroldt is considered to be the “progenitor of the European style of porcelain.” This great art is brought back to life in the 1,000+ designs from his hand and from the hands of his students!

The foundation of the first German porcelain factory in Meissen in the year 1710 sealed a success story that continues to this day. After the secret of white gold from China was discovered, one could now produce porcelain. With gorgeous, colorful décor for each fashion, Meissen porcelain has become a byword for quality and luxury.

One of the most significant personalities of this success story was the porcelain painter Johann Gregorius Höroldt (1696–1775). Höroldt, who was from Jena, was active in Vienna and was a court painter in Meissen from 1720 onward, and is considered to be the “progenitor of the European style of porcelain.” Höroldt rose to be head of porcelain painting in Meissen. Additionally, he developed other techniques for new glaze colors. As such, the famous porcelain painted was famous across Europe. Höroldt’s "Chinoiseries" – porcelain decorated in the Chinese style – made him famous in particular!

The wonderfully light scenes in the contemporary style of the Chinoiseries are an expression of their time: Chinese motifs such as plants, birds, and other animals, humans in exotic garments, and much more in the Chinese fashion in art and architecture was particularly popular in the 18th century. These designs by Höroldt, who decorated the famous porcelain of Meissen – cups, vases, tea caddies, and more – some of which are still produced today! 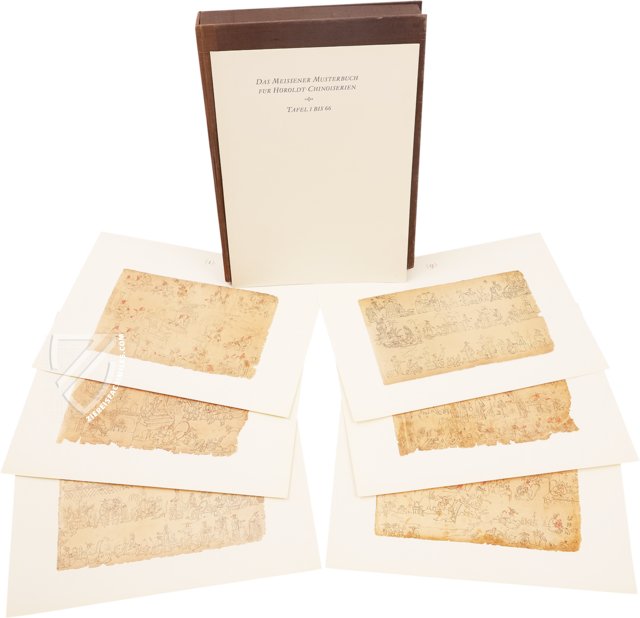 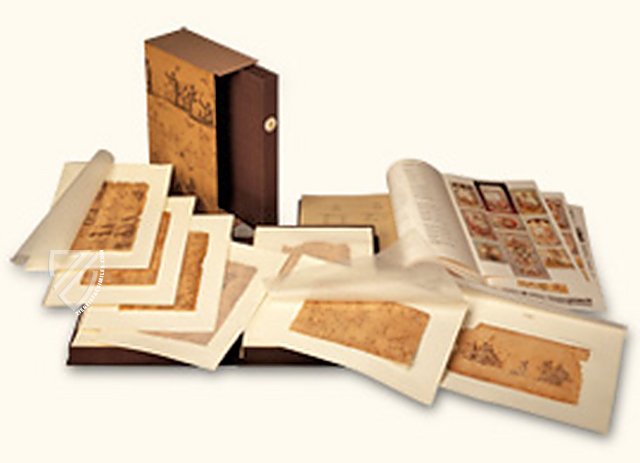 Model for a Dinner Plate

Presented in a circle approximating the “well” (the bottom where food is placed) of a dinner plate, this sketch depicts a well-dressed, elderly man with a long moustache. He holds a hand fan and extends his right arm to reveal the wide, hanging sleeves of his robe and appears to be waving off a crane or some similar type of bird that is standing in front of him. Lacking a proper background, the outdoor setting of the scene is indicated by the presence of two plants and a small bird flying overhead. 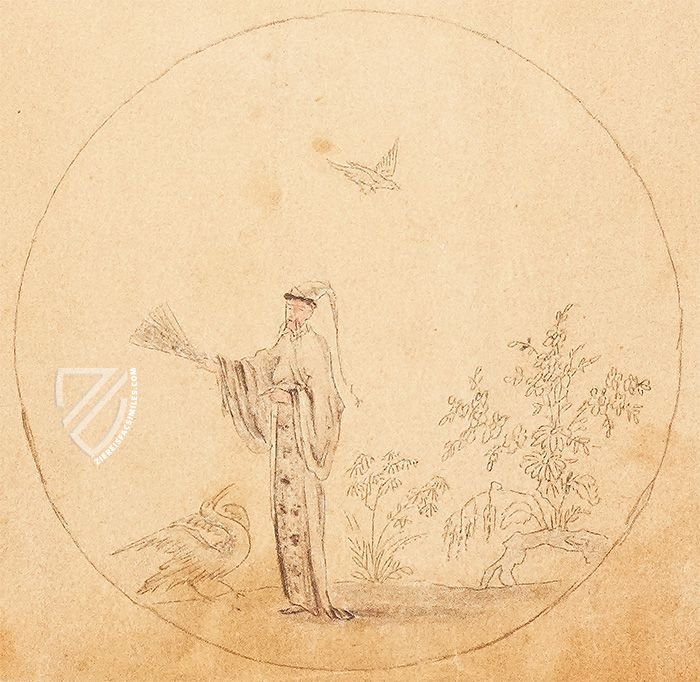 Vignettes in Various Stages of Completion

The figures presented on this page range from sketches with simple outlines to finished, realistic drawings complete with shaded falls of folds and the figures themselves casting shadows. Some of them brew tea over smoking stoves and serve steaming cups to one another while others walk hand-in-hand with children, hold babies, or nod off reclining next to a table.

Many of the elegant human figures make sweeping gestures and all wear hats ranging from simple caps and wide brimmed conical straw hats to pointed cones and feather headdresses. They are accompanied by cats and small dogs scurrying on the ground while birds and even dragons swoop in the air overhead. Numerous everyday objects add to the detail and realism of these vignettes. 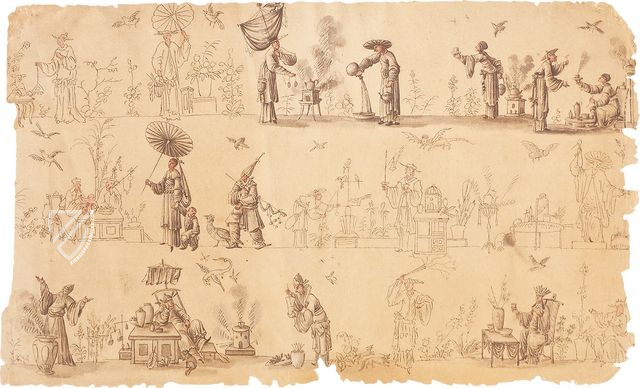 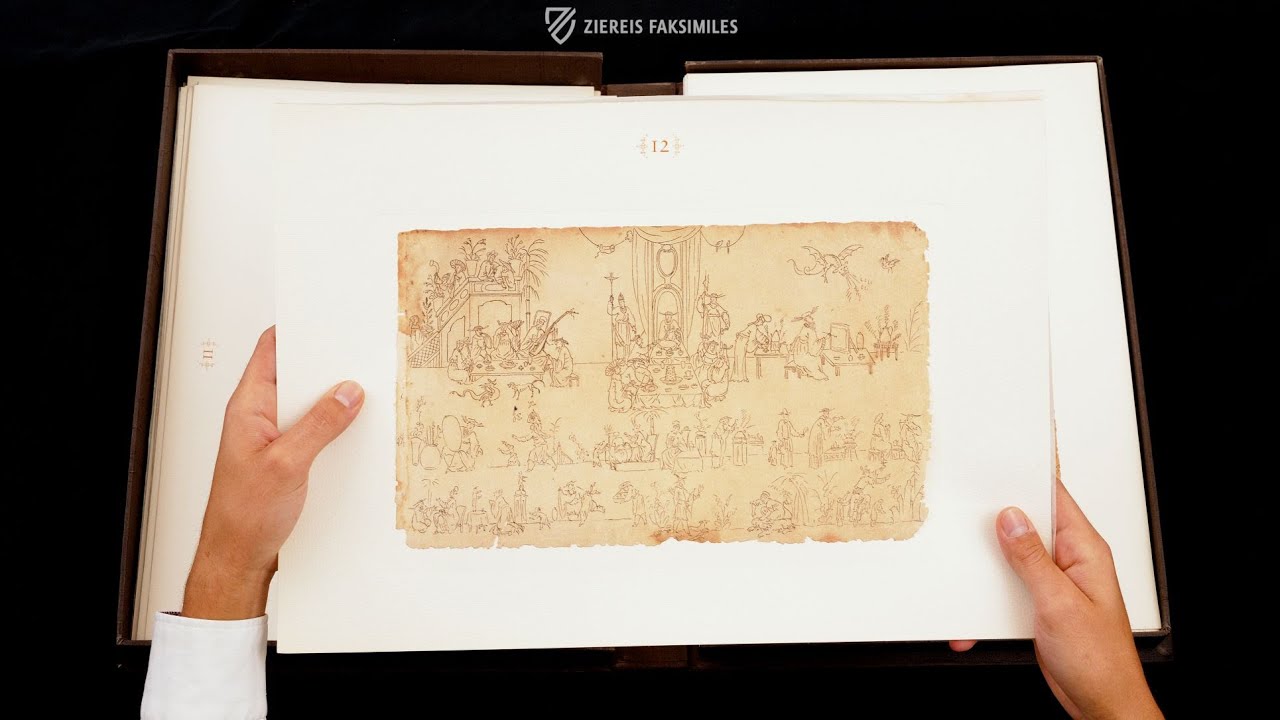 Publisher: Idion Verlag – Munich, 1978
Limited Edition: 1000 copies
Binding: Silk with printing on the spines, three volumes contained in a cloth slipcase
Commentary: 1 volume by Rainer Behrends
Language: German
1 volume: Exact reproduction of the original document (extent, color and size) Reproduction of the entire original document as detailed as possible (scope, format, colors). The binding may not correspond to the original or current document binding.
Regular price without login (like new)1,490 €
Log in for a Better Price!
Order / Ask a Question

Giunti Editore – Florence, 1981
Publisher: Giunti Editore – Florence, 1981
Limited Edition: 400 copies
Binding: Silk with printing on the spines, three volumes contained in a cloth slipcase
Commentary: 1 volume by Rainer Behrends
Language: German
1 volume: Exact reproduction of the original document (extent, color and size) Reproduction of the entire original document as detailed as possible (scope, format, colors). The binding may not correspond to the original or current document binding.
Order / Ask a Question
You might also be interested in: