In England during the High Middle Ages, Apocalypse manuscripts became very popular, as they had been in Spain in pervious centuries. Referred to more often today as the Book of Revelation, its wondrous, frightening, even psychedelic imagery provided wonderful material for the imaginative and innovative artists of the Gothic era. The Oxford Apocalypse or Ms. Douce 180 ranks among the most significant English manuscripts of the 13th century. Alone the sheer number of its miniatures, 97 in total, earns it a foremost position among all other illuminated works of this period. Likely commissioned by Edward I of England and his wife Eleanor of Castilia-León prior to the royal coronation, the manuscript enjoyed an interesting and mostly-unknown history of ownership before making its way to Oxford's Bordleian Library.

The Oxford Apocalypse or Ms. Douce 180 ranks among the most significant English manuscripts of the 13th century. The sheer number of its miniatures earns it a foremost position among all other illuminated works of this period. The artistic decoration and composition of the manuscript betray the strong personality and individuality of the artist who painted it. The use of landscape as a new element of miniature design lends the illustrations a fascinating, albeit peculiar liveliness. 97 miniatures in all accompany the Latin text of the Revelation of Saint John, the most mysterious book of the New Testament. The glorious framed miniatures are more than just mere additions to the text, indeed they are of central importance.

The English King Edward I and his spouse Eleanor of Castilia-León had commissioned this Apocalypse before their ascent to the throne in 1272, probably from the court school of Westminster. Little, however, is known about the manuscript’s later destiny. What we do know is that it belonged to Francis Douce before it passed to the Bodleian Library in Oxford. In the year 1834, Douce left it to said library where it is kept to this day. The deluxe full leather binding in which the manuscript is currently bound was produced around 1600 by an Oxfordian artist. The binding of the facsimile edition constitutes a faithful replica of this last original binding. The scholarly commentary with its 171 figures on 284 pages expertly guides the reader through the manuscript. Today’s public now has access to the Apocalypse thanks to this perfectly executed facsimile edition of the 13th century manuscript. 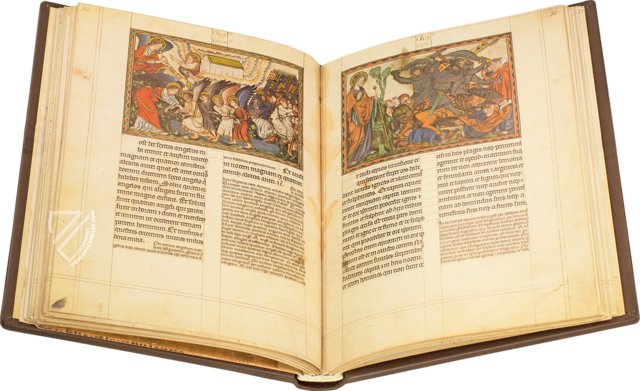 After the initial defeat and millennium-long imprisonment of Satan, Christ and the saints reign over the earth raising the martyrs: “And I saw thrones, and they sat on them, and judgment was committed to them. Then I saw the souls of those who had been beheaded for their witness to Jesus and for the word of God, who had not worshiped the beast or his image, and had not received his mark on their foreheads or on their hands. And they lived and reigned with Christ for a thousand years.” (Rev 20:4) 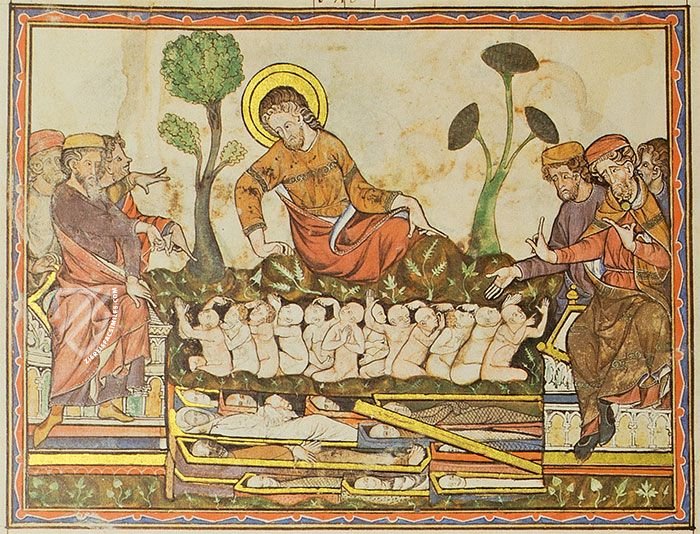 “The shape of the locusts was like horses prepared for battle. On their heads were crowns of something like gold, and their faces were like the faces of men. They had hair like women’s hair, and their teeth were like lions’ teeth. And they had breastplates like breastplates of iron, and the sound of their wings was like the sound of chariots with many horses running into battle.” (Rev. 9:7–9)

During the First Woe, a star falls from the sky, opening up a bottomless pit. An army of locusts with scorpions’ tales, commanded by the angel Abaddon, emerges to torment those without the seal of God on their foreheads for five months. They are depicted advancing in formation, the shining silver of their mail and gold of their crowns contrasting with their dark and hideous appearance. 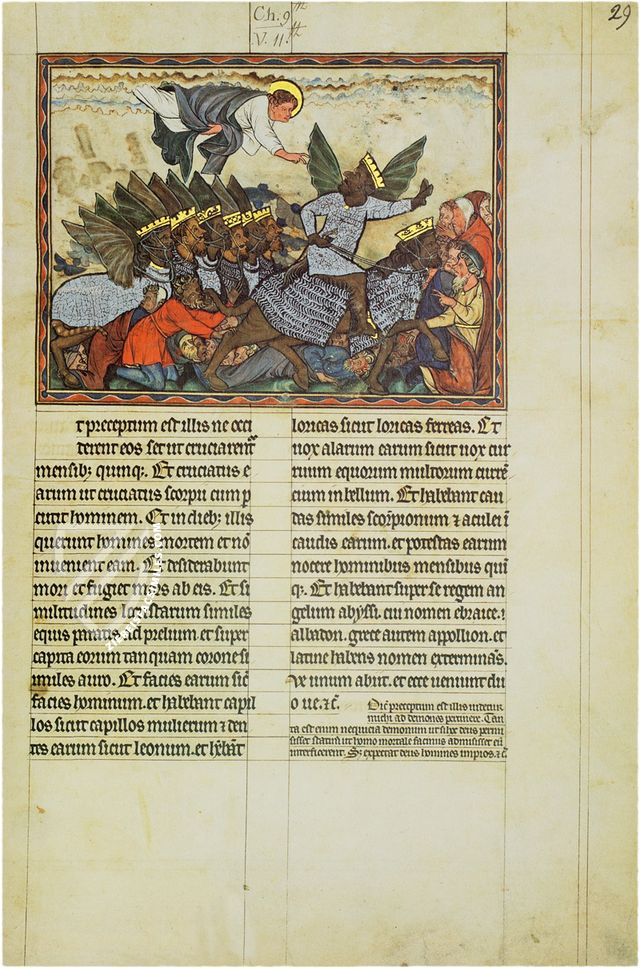 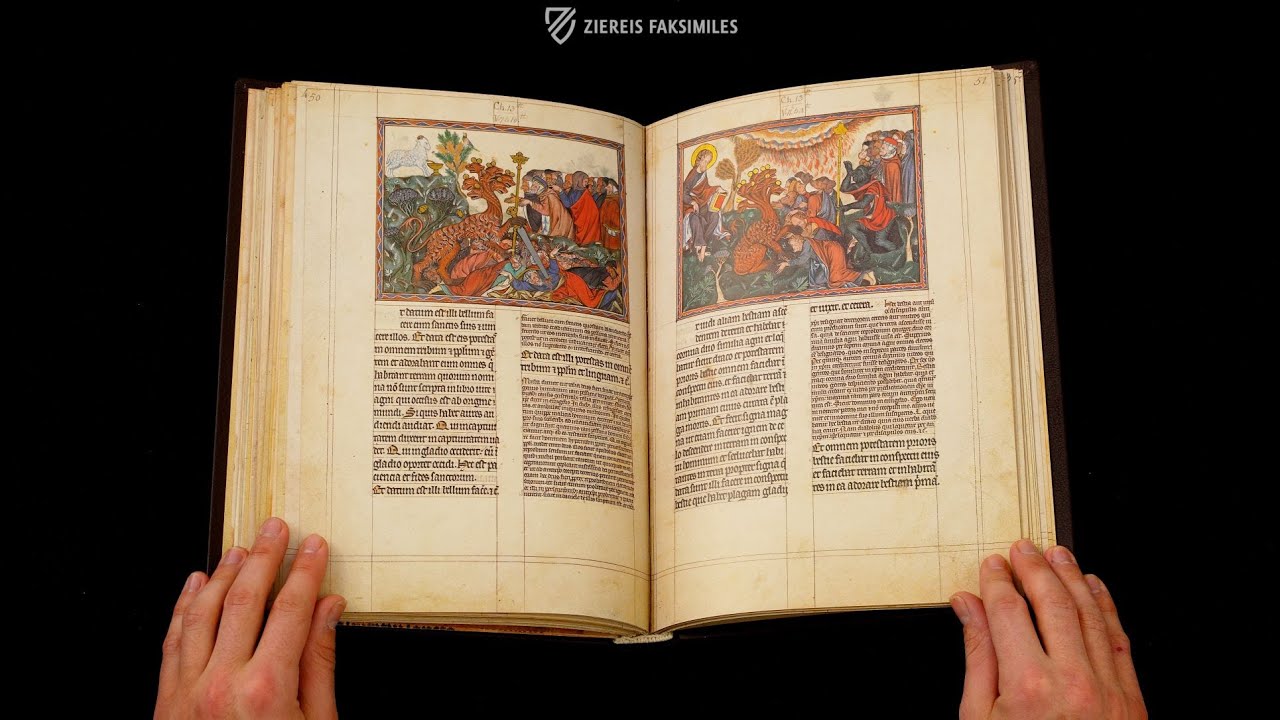 Publisher: Akademische Druck- u. Verlagsanstalt (ADEVA) – Graz, 1981
Limited Edition: 1000 numbered copies for the non-French speaking world
Binding: Exact reproduction of the 16th century leather binding, protected by a slipcase. All folios are cut according to the original.
Commentary: 1 volume (284 pages) by Peter K. Klein
Language: German
1 volume: Exact reproduction of the original document (extent, color and size) Reproduction of the entire original document as detailed as possible (scope, format, colors). The binding may not correspond to the original or current document binding.
Formerly1,980 €
Special Offer until 31.01.2023 (like new)599 €
Order / Ask a Question
You might also be interested in: 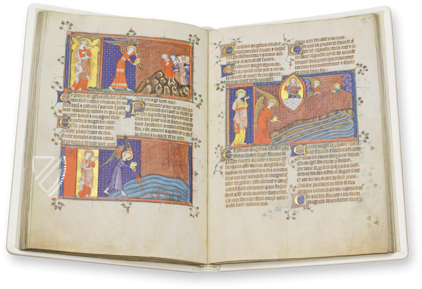 A highlight of the English Gothic style and a testimony to history: the Book of Revelation together with the English Coronation Rules of 1308 in a magnificently illuminated bilingual manuscript 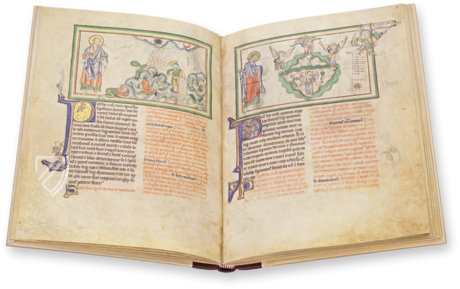 Impressive book illumination of the English Gothic: the last days of humanity from the perspective of the God-fearing High Middle Ages 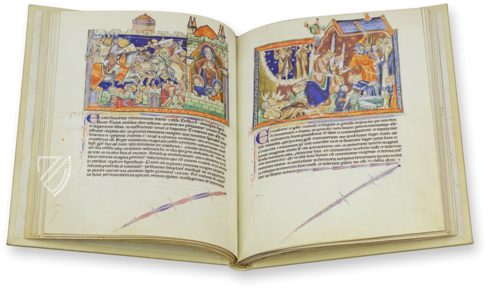 Breathtakingly beautiful, golden miniatures for the Pope: one of the most beautiful English apocalypse manuscripts of the early Gothic period 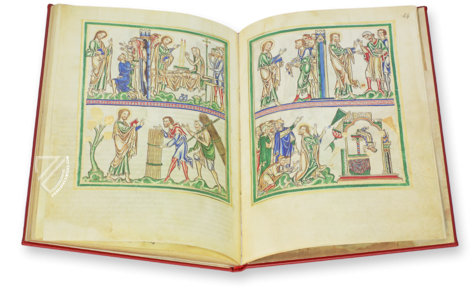 One of the earliest examples of the now famous Apocalypses of the English Gothic style: a magnificent manuscript of miniatures from Salisbury formerly owned by the kings of France 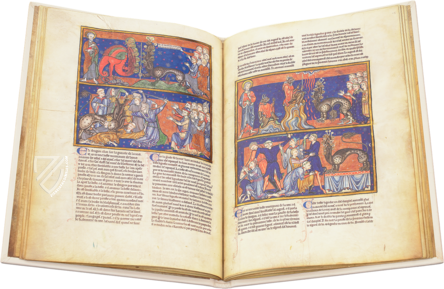