William de Brailles is regarded as one of the greatest scribes and illuminators of the Gothic period and is distinguished by his imaginative and original miniatures, which are furnished with finely embossed gold leaf backgrounds. His manuscript of Bible Pictures constitutes a purely illustrated book with 31 full-page miniatures of biblical scenes. The codex is regarded as the greatest masterpiece of the famous Oxford illuminator. Although the patron remains unknown, they must have been a layman of significant wealth and taste. The cover of the codex has an ivory plate engraved with the Nativity on the front and the Crucifixion on the back and is mounted so that the latter scene can be seen when the book is opened. This is a truly wonderful specimen from a time in the history of illumination when demand among the laity began to increase dramatically.

The countless famous and splendid masterworks of medieval illuminated manuscripts often originate from writers whose names are unfortunately no longer known to us today. An exception being the cycle of the Oxford Bible Pictures, a collection of valuable Gothic miniatures created by the world-famous master William de Braille in Oxford. This work is deemed to be the high point of his artistic creativity. On 31 pages, scenes from the life of Jesus Christ are depicted in expressive imagery, the narrative power of which is enhanced through the employment of subtly wrought gold.

The private demand for devotional books increased in the 13th century. This identifiable trend indicates that the manuscript of the Oxford Bible Pictures, which originates from this time, was commissioned by a private benefactor from the lay nobility. The anonymous commissioner of the work must have been an immeasurably wealthy person because the master William de Brailles appears to have had no limits for the composition of his artwork. Thus, he furnished his picture cycle luxuriously with burnished gold leaf, some of which remains in splendid condition to this day because of his discriminating workmanship. This exceptionality makes the codex de Braille’s most valuable work.

A Work with a Thrilling History

It cannot be said with certainty in whose possession the Oxford Bible Pictures existed after its making and to what extent it existed exactly. In the 19th century, a Parisian antiquarian acquired the 31 pages, from which he sold seven to the Wildenstein Collection, which in turn gave these to the Musée Marmottan in Paris. The remaining 24 pages were retained by the antiquarian and were bound in red velvet. A two-sided ivory plate was set in the front cover, which is unique in the history of Gothic manuscript book art. At long last the American Henry Walters acquired the work for his art museum in Baltimore, where it resides to this day.

William de Brailles is not considered to be one of the most renowned Gothic scribes and illuminators without good reason. With his Bible Pictures, he created imaginative and original miniatures that were exactly in keeping with the time and sometimes contained satirical elements. The pictures abound with liveliness and plasticity. De Braille provided the vestments of his paintings with black and white outlines, he built his scenes realistically and sojourned an exciting gold leaf background, whereby he lent his pictures a dreamlike quality. Moreover, the gold leaf background was decorated in various stages, which was unique for Gothic book art. The gold surfaces were embossed with fine patterns of diamonds, dots, or imbricate semicircles using special tools and thus contribute a jutting narrative power to the pictures.

A further element that contributed to the fame of the Bible Pictures is the delicately cut ivory plate in the front cover of the book, which was manufactured in Germany in the 14th century. The fragile panel is cut on both sides and shows in astounding plasticity the Nativity on the front and the Crucifixion on the back. At some points it is so finely cut that rays of light come through. Neither the exact function nor the creator of this completely unique work of art can be said for sure. This mystery only increases the allure that the Oxford Bible Pictures manuscript possesses for its beholders even today. 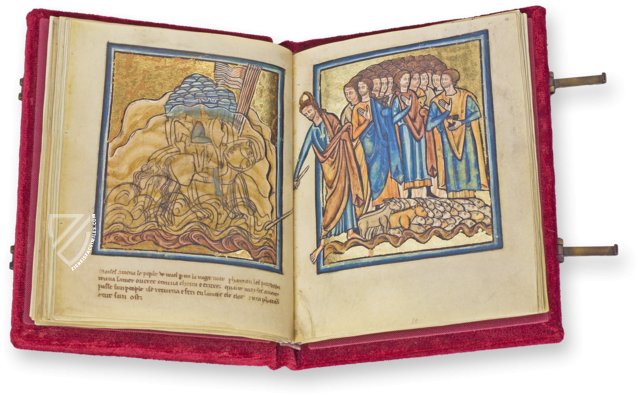 The Fall of the Rebel Angels

A popular theme in English manuscripts, the War in Heaven results in the victory of the Archangel Michael and the Heavenly Host over the dragon and his rebellious angels, all of whom are cast out of heaven. The angels are shown falling face first out of heaven into the Hellmouth, which has crenelated teeth like a castle. As they fall, their fair hues are lost, their skin darkens, and their human faces become those of beasts with exaggerated figures – they are now demons. 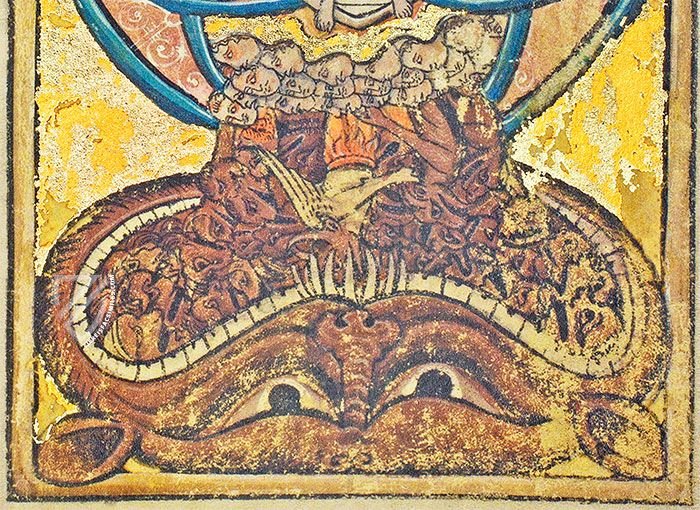 This depiction of Noah’s Arc wonderfully encapsulates the famous story. The three decks described in the Book of Genesis are depicted with animals on the first deck, birds on the second, and Noah’s family on the third. Flood waters are already beginning to rise and the last of the animals are being guided onto the Arc by an angel.

The gorgeous gold background of this miniature has a checkered pattern for the sky and a wavy pattern for the water, which is rising around the ship, the prow and stern of which are adorned with beasts’ heads not unlike a Viking longship. Typical for the manuscript, the ship exceeds its frame and the animals enter the scene from the right margin. This innovative and convenient narrative device is used throughout the codex. 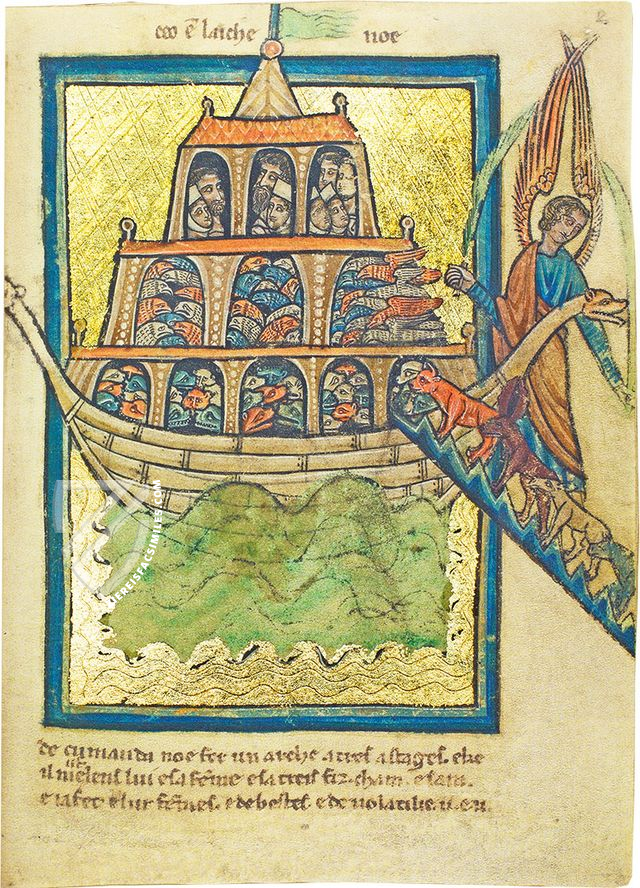 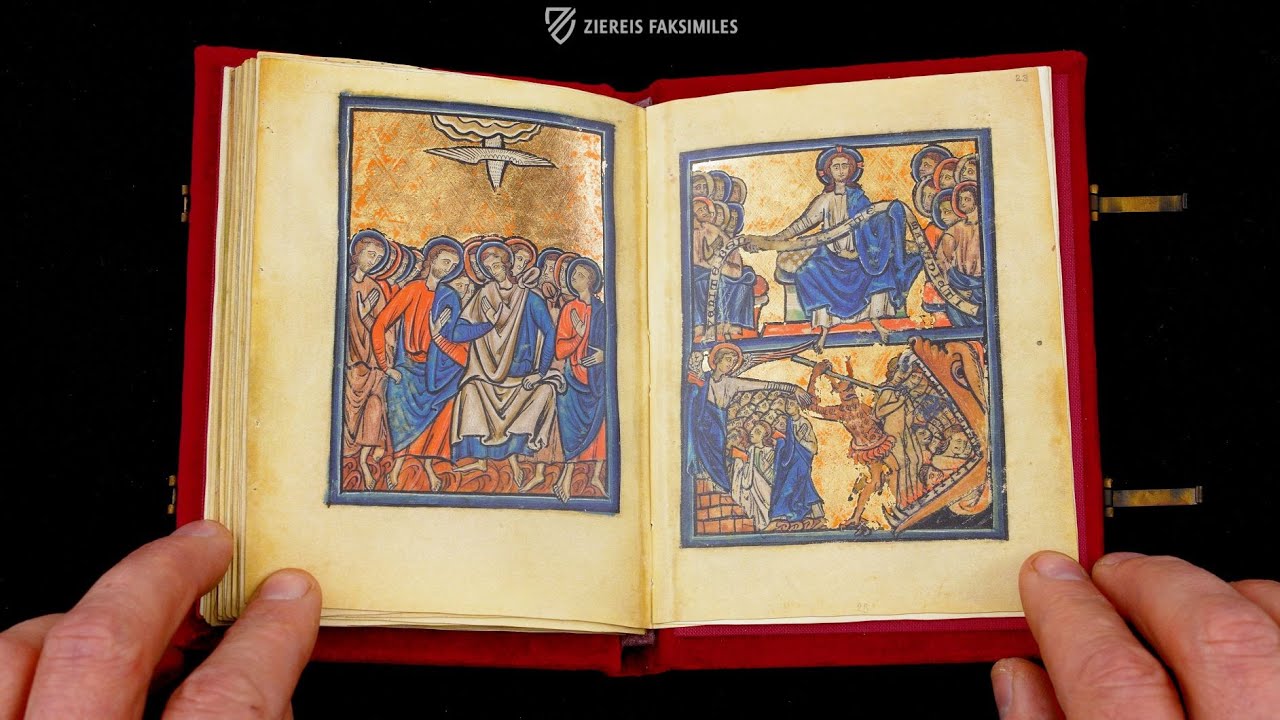 Publisher: Faksimile Verlag – Lucerne, 2004
Limited Edition: 980 copies
Binding: The facsimile is protected by a binding that is a replica of the present binding, including the ivory panel carved on both sides and the two clasps. The facsimile edition comes in a handmade decorative leather case with an acrylic window set into it to properly display the ivory replica of the Oxford Bible paintings.
Commentary: 1 volume (263 pages) by William Noel
Languages: English, German
1 volume: Exact reproduction of the original document (extent, color and size) Reproduction of the entire original document as detailed as possible (scope, format, colors). The binding may not correspond to the original or current document binding.
Price Category: €€ (1,000€ - 3,000€)
Edition available
Price: Login here!
Order / Ask a Question
You might also be interested in: 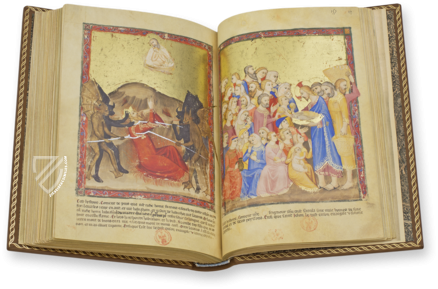 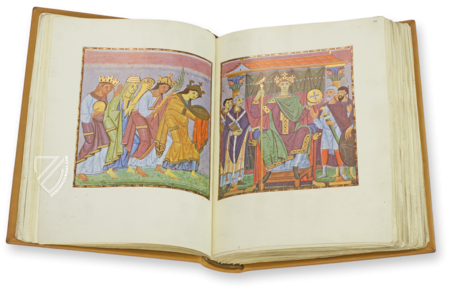